A U.S. magistrate has ordered Apple to assist the government in unlocking the iPhone of San Bernardino shooter Syed Rizwan Farook. The FBI is seeking information that may be on Farook's employer-issued phone as it investigates the Dec. 2 shootings that left 14 people dead. 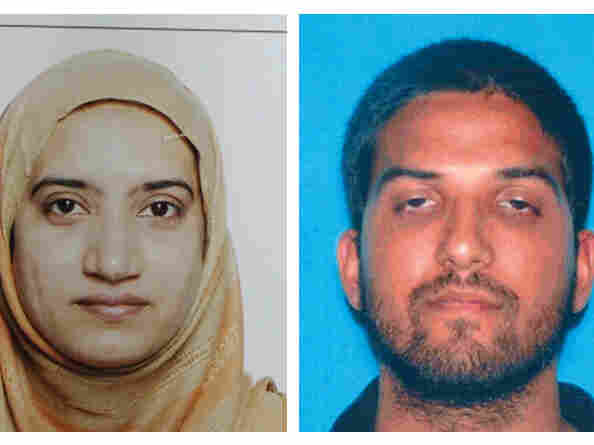 Tashfeen Malik (left) and Syed Farook died in a gunbattle with police after the couple attacked a gathering of Farook's colleagues, killing 14. AP hide caption 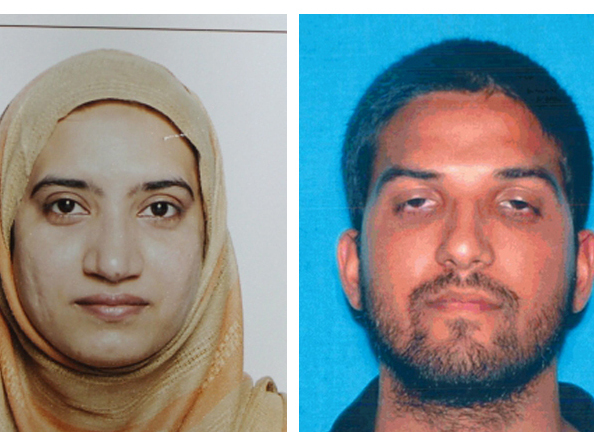 Tashfeen Malik (left) and Syed Farook died in a gunbattle with police after the couple attacked a gathering of Farook's colleagues, killing 14.

At the time of the attack, Farook and his wife, Tashfeen Malik, destroyed two personally owned cellphones and removed a hard drive from their computer.

In what Apple described as a "customer letter" posted on its website late Tuesday, CEO Tim Cook said Apple will contest the judge's order.

"Opposing this order is not something we take lightly. We feel we must speak up in the face of what we see as an overreach by the U.S. government.

"We are challenging the FBI's demands with the deepest respect for American democracy and a love of our country. We believe it would be in the best interest of everyone to step back and consider the implications.

"While we believe the FBI's intentions are good, it would be wrong for the government to force us to build a backdoor into our products. And ultimately, we fear that this demand would undermine the very freedoms and liberty our government is meant to protect."

"Apple says helping the FBI will be like providing a universal key that will permit law enforcement to break into anyone's iPhone. Apple and other tech companies say it would also create a vulnerability that hackers from China, Iran or elsewhere can exploit."

"It is a big problem for law enforcement armed with a search warrant when you find a device that can't be opened even when a judge says there's probable cause to open it," Comey said.

In a prior case, Apple told a federal judge that it was "impossible" for the company to unlock devices running an operating system of iOS 8 or higher. In arguing this latest case, prosecutors said Apple could still disable security barriers in the phone's coding. Farook's phone runs iOS 9 and, if the security feature is enabled, will erase data after 10 unsuccessful password attempts.

Forensics expert Jonathan Zdziarski said Apple might have to write custom code to comply with the court order. He also said that even without Apple's cooperation, federal investigators should be able to hack the phone with the assistance of the NSA and the CIA.