Accessibility links
Canada To Launch Nationwide Investigation Into Murdered, Missing Aboriginal Women : The Two-Way A study by Canada's police found that nearly 1,200 Aboriginal women were murdered or went missing between 1980 and 2012. But two Canadian government ministers say that number could be far higher. 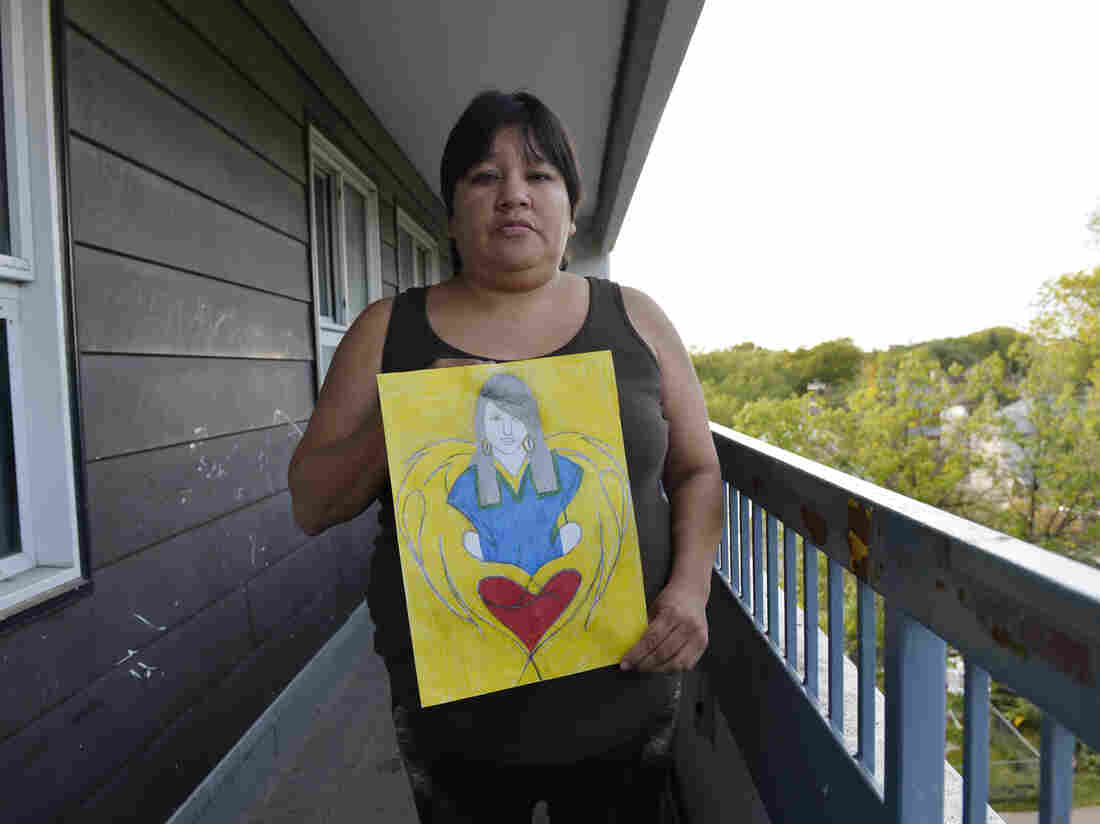 Lita Blacksmith displays a drawing she made of her 18-year-old daughter Lorna, who was murdered in Winnipeg in 2012. A police study found that 1 in 4 female homicide victims in Canada in 2012 was an aboriginal woman. Jim Rankin/Toronto Star via Getty Images hide caption 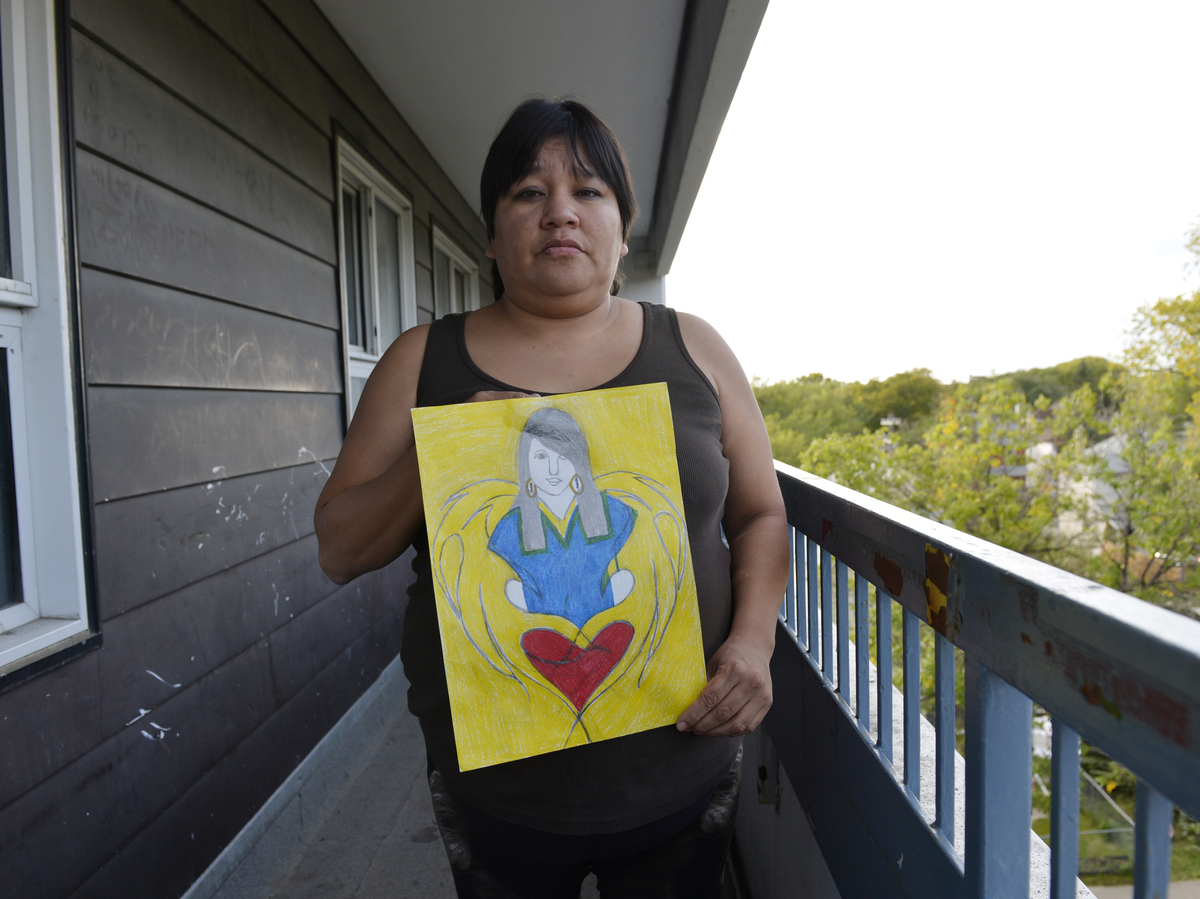 Lita Blacksmith displays a drawing she made of her 18-year-old daughter Lorna, who was murdered in Winnipeg in 2012. A police study found that 1 in 4 female homicide victims in Canada in 2012 was an aboriginal woman.

Canada's government is preparing to launch a major inquiry on murdered or missing aboriginal women.

A 2014 study by the Royal Canadian Mounted Police found that nearly 1,200 aboriginal women were murdered or went missing between 1980 and 2012. But two government ministers involved in planning the investigation say they believe the numbers are actually far higher.

"When you look at the real depth and breadth of this tragedy, it's way bigger than we had thought," Indigenous Affairs Minister Carolyn Bennett said at a news conference with Minister for the Status of Women Patty Hajdu this week in Ottawa.

Dan Karpenchuk in Toronto tells our Newscast unit that "the Minister for the Status of Women says a more realistic number would be 4,000 based on a history of police under-reporting or failing to properly investigate cases of missing native women."

Hajdu told the CBC that the estimate of 4,000 is based on research from the Native Women's Association of Canada.

Referring to the 2014 study, Hajdu said the mounted police "were only looking at very specific parameters." She said some of the cases left off are disputed cases or involve cases deemed to be "a suicide or a death due to exposure but in fact there are signs or symptoms that it wasn't."

Bennett said Monday that "we've heard somebody shot in the back of the head called a suicide. I think people do want to know what happened, that all of a sudden there's no investigation because it was designated some natural causes, or overdose, or suicide, or an accident."

She added that the numbers in the study don't include survivors of an attack or women who escaped abduction.

And Former Minister of Aboriginal Affairs Chuck Strahl told The Globe and Mail that some cases happen in remote areas, making them less likely to be reported. He added: "Sometimes people don't trust local authorities, whether the police or ... local First Nations authorities."

According to the police study, aboriginal women make up about 4 percent of Canada's female population. But they represent nearly 1 in 4 female homicide victims in Canada, based on 2012 numbers.

Hajdu and Bennett spoke to reporters Monday after completing cross-country consultations with thousands of people to develop the scope of the national inquiry.

Among the issues that they're considering: Who to lead the inquiry, what do to about cold cases, and how to incorporate aboriginal traditions. Also under discussion is how to handle these sensitive issues without further traumatizing surviving family members.

Canada's newly elected prime minister, Justin Trudeau, vowed during his campaign to launch the inquiry immediately "as part of his bid to establish a new 'nation to nation' relationship with indigenous peoples," the CBC reports.

Before Trudeau's electoral victory, his predecessors in "the Conservative government had long dismissed calls for a national inquiry, with prime minister Stephen Harper asserting the deaths and disappearances are not part of a 'sociological phenomenon,' " the Globe and Mail reports.

A recent Toronto Star investigation suggests there is no clear profile for killers of aboriginal women.

"Half of the victims were domestically related to the perpetrator," but "16 per cent of the offenders were acquaintances; 15 per cent were strangers; and 13 per cent serial killers," the newspaper investigation found.

On Valentine's Day, vigils were held across Canada to remember missing or murdered aboriginal women. One of the memorials was in front of Toronto police headquarters, AJ+ reports:

The demonstrators there highlighted the case of Bella Laboucan-McLean, who fell 31 floors to her death in downtown Toronto in 2013. She was 25.

AJ+ reports: "Her death is still listed as suspicious and unsolved and open to this day," says her sister Melina. "What I really hope that the inquiry ... will look at the colonial and systemic roots — the root issues of the murdered and missing indigenous women issue — but also it will look at how police are complicit in the high rates of unsolved cases across this country."

Concern that police are not adequately investigating these cases is a regular complaint, Bennett said at Monday's news conference. She said that during her cross-country trip, one family told her "that when the loved one was listed as Caucasian, they decided not to correct it in case the search or the investigation wouldn't be as good."