Accessibility links
Antonin Scalia Lies In Repose As Mourners Pay Respects At Supreme Court : The Two-Way A long line of mourners queued up Friday to pay their respects to the late Supreme Court justice, whose body is lying in repose.

A long line of mourners queued up to pay their respects to late Supreme Court Justice Antonin Scalia, whose body is now lying in repose at the Great Hall of the Supreme Court.

Parts of the observances will be open to the public. A private ceremony was slated to begin at 9:30 a.m. ET. Members of the public will be allowed into the hall until 8 p.m.

Barack and Michelle Obama paid their respects to Scalia at around 3:30 this afternoon, after the visitation by the general public has begun. They stood next to the casket for about a minute with their hands clasped in front of them, both wearing black.

The crowd that gathered for the event was wide-ranging. Local residents were present; so were English students who are on a class trip to the United States. Nearby, a man was playing the bagpipes.

In Photos: A Short History Of Official Funerals For Supreme Court Justices

NPR intern Samantha Del Duca spoke to Ben Williams, the bagpipe player, who said he is a former history teacher who taught government and politics in southern Maryland – and who now sees an "intolerable" amount of political division in the U.S.

"I think he was a steadying force, and I think he was just, and he tried to be as logical and contemplative as humanly possible," Williams said of Scalia. "I hope they can replace him with someone equally talented, with understanding of the law and the purpose behind it. That's my concern. Justice Scalia was a fantastic man, I think."

Another visitor was Emily Weatherspoon, a senior at St. Mary's School who said she respects Scalia as a Supreme Court justice.

Ashley Varner (center) and friends pay respects to #Scalia by holding signs as they walk along the #SCOTUS building. pic.twitter.com/tB4ku5pWG8

"The plan was not originally to come out this morning," Weatherspoon tells Samantha. But, she adds, "we're here to study the government up close. To get the opportunity to come out and see something like this is definitely a once-in-a-lifetime experience."

Just before 9:30, an honor guard at the Supreme Court led Scalia's former law clerks, who are acting as honorary pallbearers, between rows of mourners as they left the Great Hall to meet Scalia's casket. 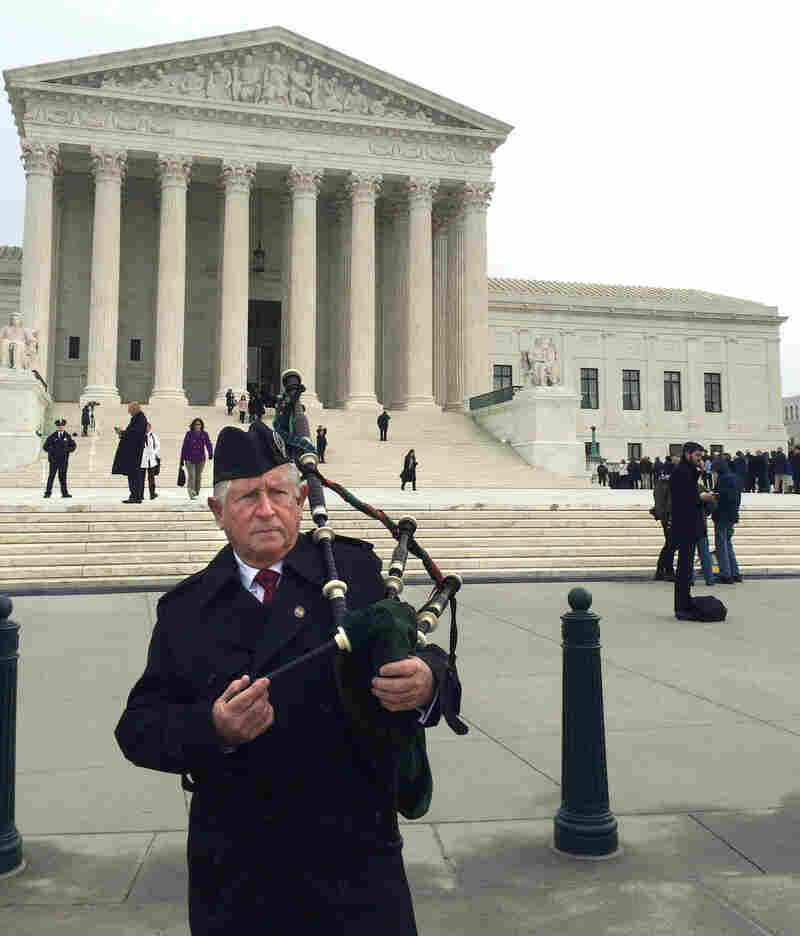 Benjamin Williams, who arrived at the Supreme Court at 6 a.m., could be heard playing a Welsh lullaby on his bagpipes in honor of the late Justice Antonin Scalia this morning. Samantha Del Duca/NPR hide caption

After the casket was placed on the platform, Scalia's son, Father Paul Scalia, addressed those gathered and said a prayer. The justices then paused for a long moment of silence before leaving the hall; soon after, the line of mourners began moving through the hall.

The funeral for Scalia is scheduled for Saturday, at the Basilica of the National Shrine of the Immaculate Conception in Washington. President Obama will not be at the service; Vice President Joe Biden and his wife will attend.

"Scalia is only the fourth justice to die in office in the past 65 years, and there is no consistent pattern of presidential attendance at court funerals," Nina says.