Accessibility links
Motive Unknown In Kalamazoo Shootings; Suspect Was Uber Driver : The Two-Way Police arrested 45-year-old Jason Dalton in the shooting deaths of six people in Michigan. Two other people were also shot, including a 14-year-old girl. Dalton is to be arraigned on Monday. 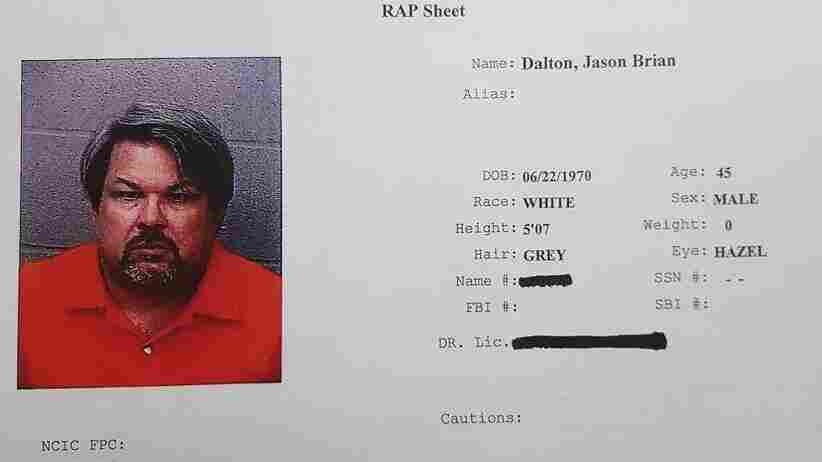 A mugshot and rap sheet of Jason Dalton, who police say went on a shooting spree that lasted for hours in Kalamazoo, Mich., on Saturday. Kalamazoo Public Safety hide caption 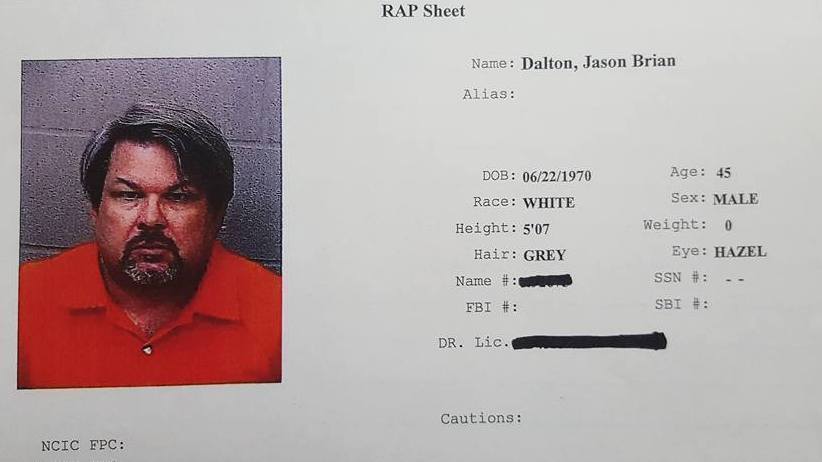 A mugshot and rap sheet of Jason Dalton, who police say went on a shooting spree that lasted for hours in Kalamazoo, Mich., on Saturday.

Authorities in Kalamazoo, Mich., are piecing together clues from a weekend shooting spree. At least six people are dead after multiple shootings in three different locations in the area on Saturday night.

Police arrested 45-year-old Jason Dalton. He worked as an Uber driver — and may have logged some hours on Saturday, according to local reports.

In addition to those killed, two other people were shot: a woman standing outside her apartment building who is expected to survive, and a 14-year-old girl reported to be in critical condition.

Several hundred people attended a vigil Sunday night that was held by local churches, according to Rick Pluta of Michigan Radio.

Pluta also reports that Dalton is scheduled to be arraigned on Monday.

"Authorities could not say what they believed motivated him to target victims with no apparent connection to him or to each other," The Associated Press reports.

At a news conference Sunday morning, Kalamazoo County Prosecutor Jeffrey Getting said officials believe the attacks were random, with bullets striking people who happened to be in the wrong place when the rampage started.

When asked whether he viewed the violence as an act of terrorism, Getting said no.

The victims range from four women who were shot in the parking lot of a Cracker Barrel restaurant to a father and son who were at a car dealership, according to local news TV WWMT.

The 14-year-old girl now in critical condition was also shot at the restaurant. Police had initially listed her as a fatality, causing a discrepancy in reports about the attack.

Calling the shootings "a senseless act of violence," Gov. Rick Snyder has ordered state buildings to fly the state and U.S. flags at half-staff for the next six days, to honor the six who died.

Kalamazoo Public Safety Chief Jeff Hadley says Michigan police arrested Dalton, and they believe he alone is responsible for the killings. Earlier, based on descriptions drawn from surveillance video and eyewitness statements, police said they were looking for a white man in his 50s, driving a blue Chevrolet HHR.

On Sunday, reports emerged that Dalton may have been a driver for Uber — and the ride-hailing service has now confirmed to NPR that this is indeed the case, and that Dalton, who police have said did not have a criminal record, had passed the company's background check.

"We are horrified and heartbroken at the senseless violence in Kalamazoo, Michigan. Our hearts and prayers are with the families of the victims of this devastating crime and those recovering from injuries. We have reached out to the police to help with their investigation in any way that we can."

Reports about Dalton driving for Uber included at least one indication that he might have been driving clients on Saturday. A smartphone screengrab posted to Facebook appears to show his face and first name in Uber's app. That trip was canceled.

"Several people have said that Dalton was their driver for Uber," WWMT reports. "We have also found that someone may have had an experience with him during an Uber ride yesterday."

Last night, a woman used Facebook to urge others not to ride with the man, saying her fiancee had gotten out of the car after the driver had sped through stop signs and driven into oncoming traffic, reports the Kalamazoo Gazette.

The Michigan State Police has identified victims of Saturday's attack at the Cracker Barrel, saying that occupants of a Chevrolet Cruze and an Oldsmobile Silhouette minivan had been fired upon.

Here are the names of four people who died at the restaurant, from the state police:

Kalamazoo Public Safety on Sunday also identified a father and son as the two victims killed at the car dealership. They are Richard Eugene Smith, 53, and Tyler Daniel Smith, 17, both from Kalamazoo.

The state police also say a 14-year-old girl and an adult woman are critically injured. The teen had been a passenger in the front seat of the Chevrolet.

Kalamazoo Public Safety says of the suspect: "His demeanor was even-tempered upon arrest, according to the prosecutor. He was cooperative. Acts committed were intentional. Semi-auto handgun was found in suspect vehicle."

Dalton's neighbors in rural Cooper Township not far from Kalamazoo expressed shock. Sally Pardo, who lives across the street, says, to her, the married father of two was just "a normal guy."

"We sure wouldn't have suspected anything. We were shocked. Absolutely shocked."

Pardo's husband, George, says Dalton bought a gun a few years ago to deal with prowlers, and he did fire it a couple of times.

WMUK's Gordon Evans tells our Newscast unit that Dalton was taken into custody more than six hours after the first shooting:

"The shootings began at an apartment complex where one woman was injured.

"Two men were then killed outside a car dealership and four people were shot to death in the parking lot of a restaurant.

"A Kalamazoo County Sheriff's Department official told the Kalamazoo Gazette that it appeared the gunman was driving around and shooting people randomly."