Accessibility links
Mysterious Ocean Buzz Traced To Daily Fish Migration : The Two-Way Scientists say the buzz picked up by hydrophones in the Pacific may be caused by "fish farts" — the emptying of air bladders that let clouds of fish rise and fall during daily hunts for food. 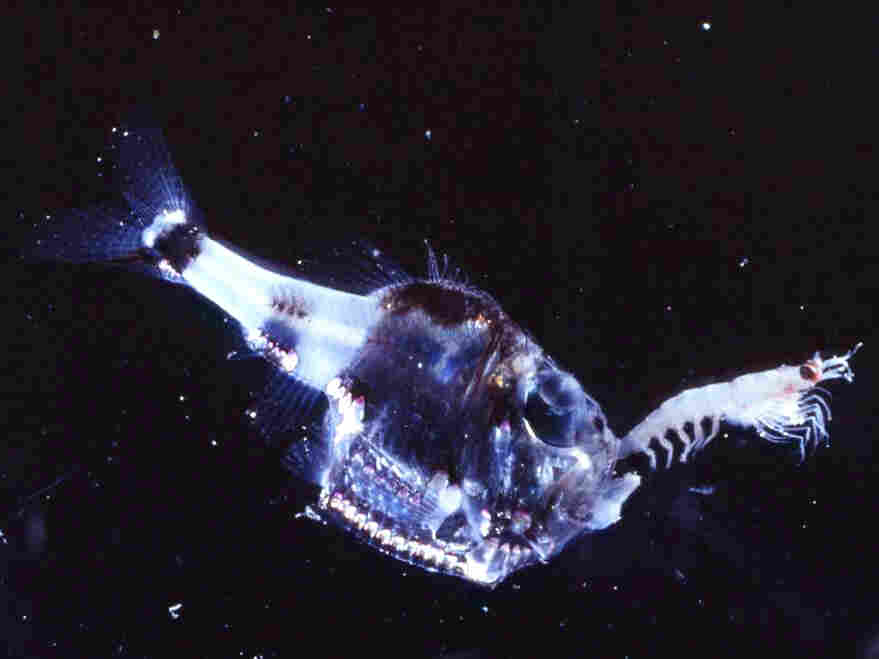 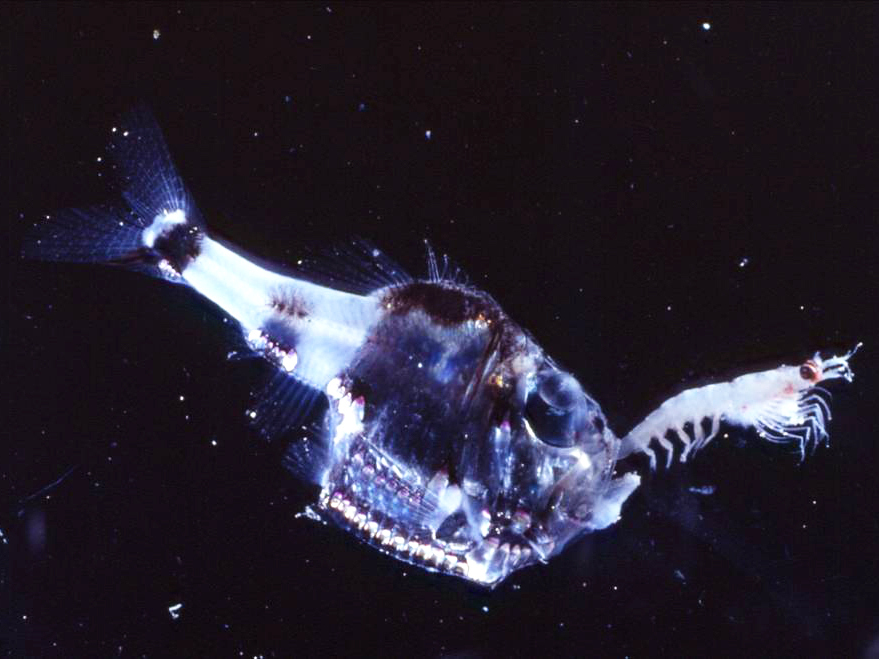 The half-naked hatchetfish, shown here munching on a shrimp, is just one of many billions of mesopelagic ocean fish that migrate up and down the water column each day to hunt food and avoid predators.

You might expect the middle of the Pacific Ocean to be a pretty quiet place, especially a thousand feet down. But it turns out that huge parts of the ocean are humming.

Scientists have puzzled over the source of the sound for several years. Now, a marine biologist reporting Monday at a meeting of ocean scientists in New Orleans says she thinks her team may have figured it out.

The discovery started with hydrophones. Marine scientists listen to the deep ocean by dropping these underwater microphones over the side of ships, or by putting them on buoys. Usually they hear what sounds like male humpback whales calling to each other at mating time, or the clicking signals of dolphins and other marine mammals.

But a few years ago, those hydrophones picked up something weird out in the Pacific. The puzzling sound was faint, but continuous at certain times of day — just a few decibels above the background level — and definitely different from the normal sound of the ocean. It was 300 hertz and above — high for the call of a whale, and too continuous to be the signals of other marine mammals.

The sound of the ocean humming

According to Simone Baumann-Pickering, a marine biologist at the Scripps Institution of Oceanography at the University of California, San Diego, the nature of the sound was "more as if you're sitting on an airplane and it's humming, buzzing." The sound starts after the sun sets, she says, and goes on for a couple of hours, then stops. The same thing happens at dawn.

Now, biologists knew that huge clouds of small fish and crustaceans and squid tend to hide in the dark, deep water during the day, and rise up nearer the surface to feed at night. This happens in all oceans in the mesopelagic zone, a fish-rich area of little light that stretches from about 660 feet beneath the sea's surface to depths of around 3,300 feet.

It took hydrophones in the Pacific to reveal that the hum actually accompanies that daily rise and fall of the fish migration.

Why the noise? Scientists can only speculate. It could be, says Baumann-Pickering, that the creatures "are truly, actively communicating — potentially to initiate migration." In other words, maybe the buzz is just a signal that "it's time to go," she says.

But there's another more mundane possibility.

"It's known that some fish are considered to be farting," says Baumann-Pickering, "that they emit gas as they change depths in the water column." The gas comes from a swim bladder inside the fish that controls its buoyancy.

In either case, billions of fish may be jetting up and down in the ocean every day, and making it hum. If so, it would likely be the largest migration of vertebrate animals on the planet, Baumann-Pickering says. She calculates that the weight of the fish amounts to some 10 billion tons.

At the New Orleans meeting sponsored by the American Geophysical Union, Baumann-Pickering told colleagues the sound raises an interesting question. Why would the fish do this if, as you might expect, the noise would have the effect of a dinner bell, attracting large predators?

Nobody knows, she says. "We're just scratching the surface in terms of understanding how important sound is" in the ocean.