Accessibility links
Sheriff Says Kansas Shooter Was Served Protection Order Just Before Attack : The Two-Way The suspect, identified as Cedric Ford, is believed to have started shooting 90 minutes after he was served. Three people were killed and more than a dozen wounded before Ford was killed, police say. 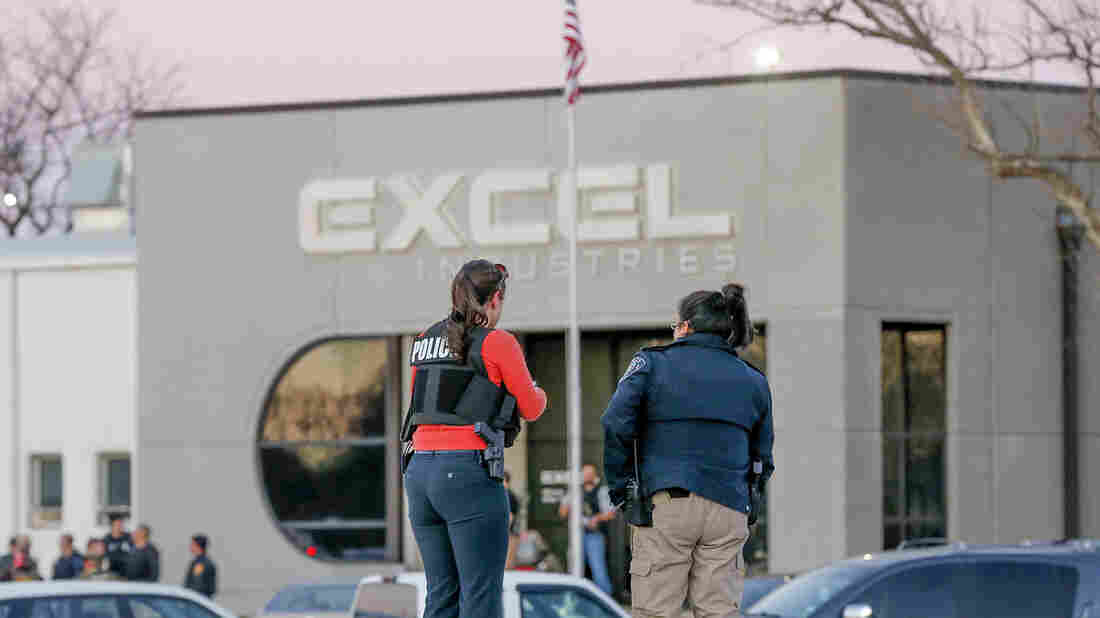 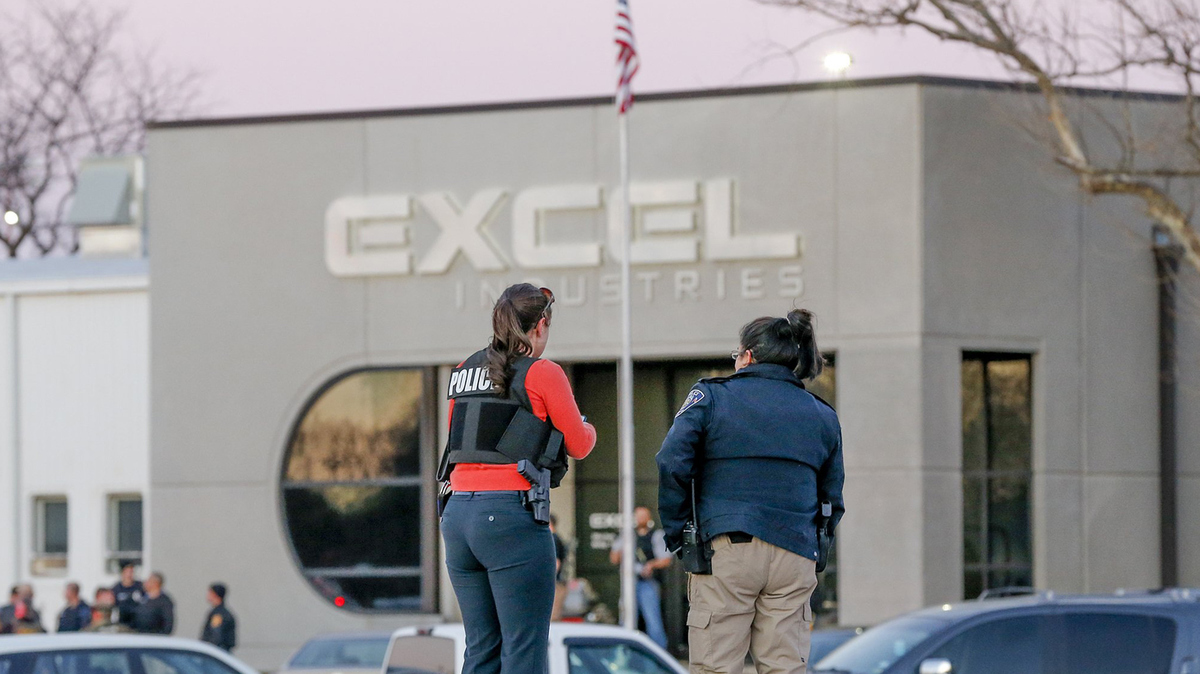 Police guard the front door of Excel Industries in Hesston, Kan., where a gunman killed three people and injured a dozen more on Thursday.

The man suspected of killing three people and injuring more than a dozen others in shootings Thursday in Kansas had been served a protection-from-abuse order earlier that afternoon, according to Harvey County Sheriff T. Walton.

The shooter, whom Walton identified as 38-year-old Cedric Ford, was served the order at 3:30 p.m. CT at the Excel Industries manufacturing plant in Hesston where he worked. An hour and a half later, the shootings began.

First, Ford went to Newton, Kan., where he shot and injured one victim, Walton said. He then drove his car into a ditch, shot another driver in the leg and stole that victim's car. Ford traveled back to the Excel Industries plant and shot one person in the parking lot and more than a dozen others inside the building, the sheriff said at a news conference early Friday.

The suspect's whereabouts between the time he was served the order and when the shooting began aren't clear.

The spree left 14 people hospitalized, some in critical condition, and three victims dead. All those who died were inside the lawnmower parts plant, Walton said.

He said the shooter was armed with an assault-style rifle and a pistol. About 200 to 300 people were inside the building at the time, according to law enforcement estimates.

The attack ended when a police officer arrived, entered the building and shot and killed the shooter, according to the sheriff. The officer was not injured.

Walton said he believes the protection order — served because a girlfriend had alleged that Ford was abusive, according to the Wichita Eagle newspaper — triggered the attack.

The Eagle reported that in the petition for protection, the woman describes Ford as "alcoholic, violent, depressed" and says he's "in desperate need of medical & psychological help!"

The sheriff said that when his office served the order to Ford, there was no indication that anything was out of the ordinary.

"It's normal when someone gets served a protection, an abuse order, to get upset. That's normal," Walton said. "He didn't display anything that was outrageous, just that he was a little upset that he got this order."

Walton did not release the names of the victims or the identity of the officer who killed the shooter. He said in more than two decades in the area, he'd never seen anything like this shooting.

"As far as 'we don't ever think this was going to happen here' — well, isn't that what every sheriff says that's stuck up on a podium like I am now?" he said. "But it does. And it's happened here."

Later on Friday, a Kansas woman was charged with knowingly transferring a firearm to Ford, a man she knew to be a convicted felon, according to U.S. Attorney Barry Grissom in the District of Kansas. The affidavit alleges that Sarah T. Hopkins, 28, of Newton, Kan., gave Ford a Zastava Serbia, AK-47 type semi-automatic rifle and a Glock Model 22 40-caliber handgun.

If convicted, Hopkins faces a maximum penalty of 10 years in federal prison and a fine up to $250,000.