Accessibility links
FBI Chief And Apple's Top Lawyer Testify In Congress : The Two-Way Director James Comey says law enforcement tools are growing more ineffective in the face of encryption and acknowledges that the legal battle the FBI is fighting with Apple may be precedent-setting. 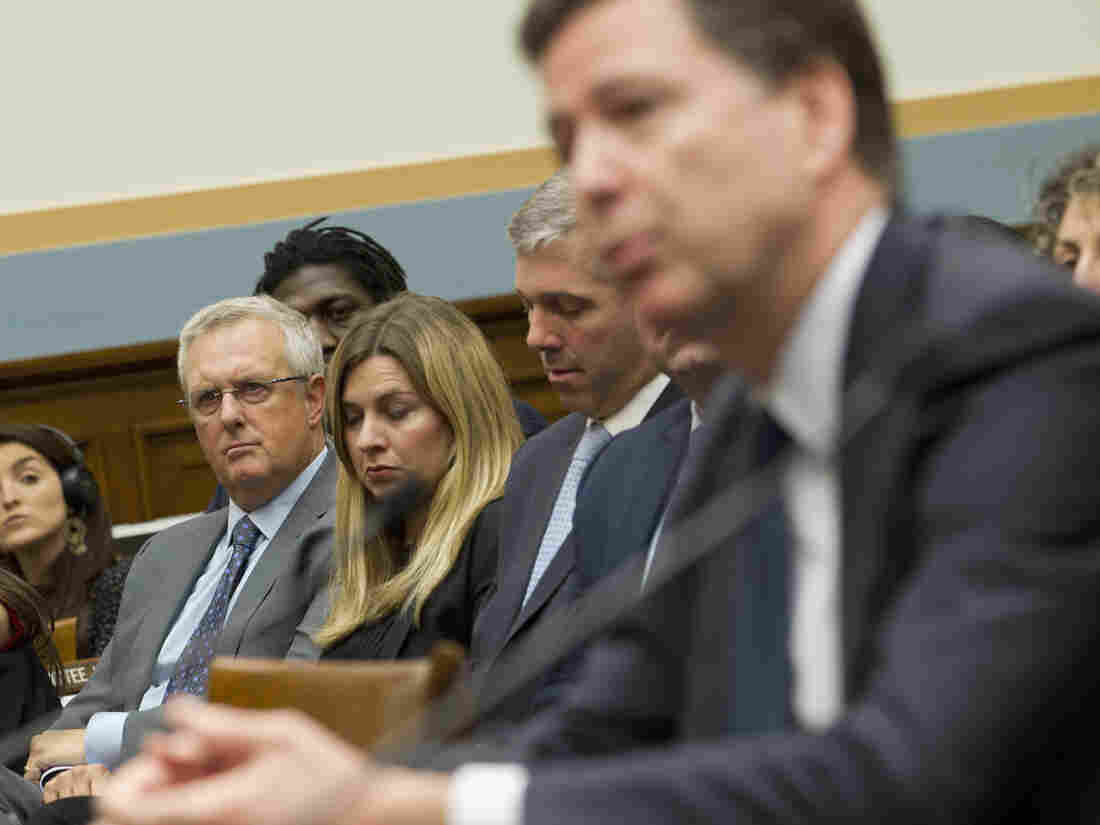 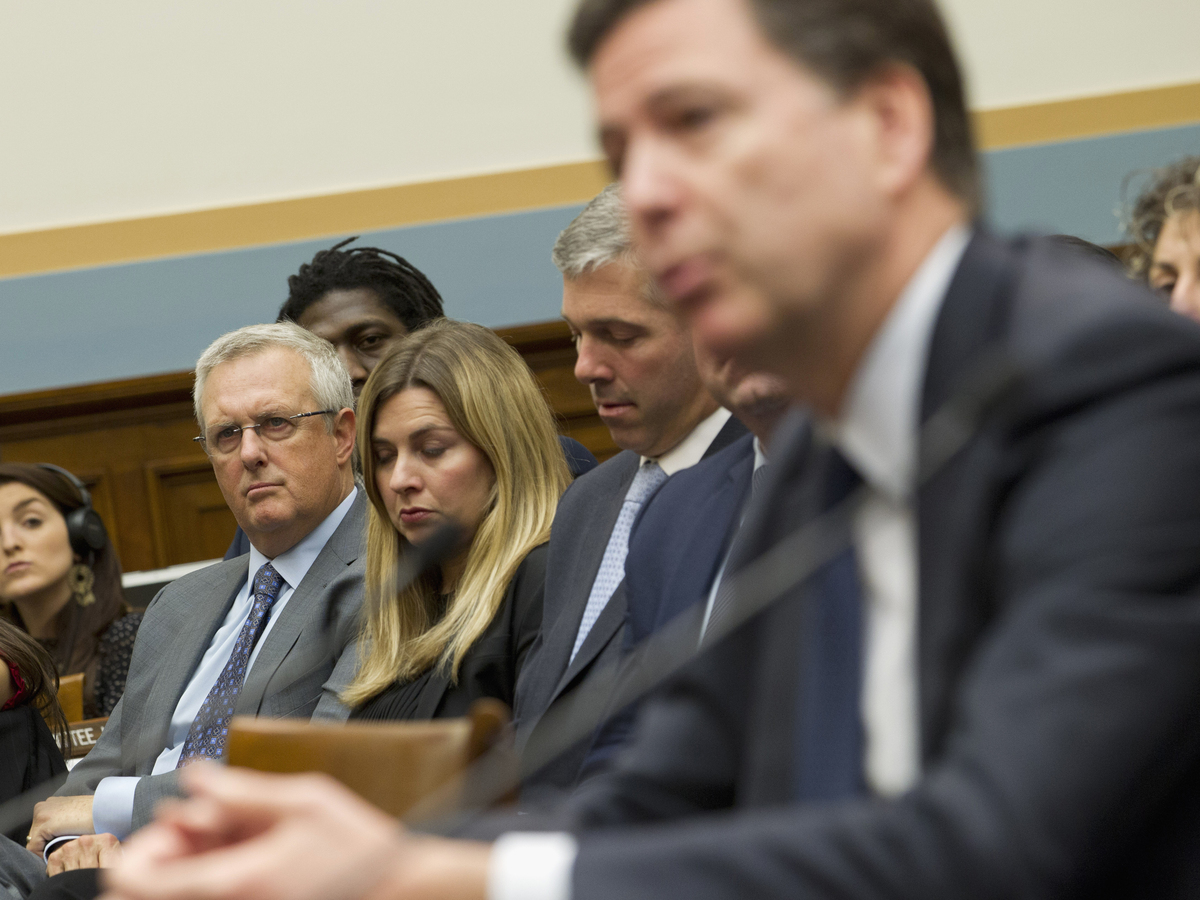 FBI Director James Comey says encryption is making phones "warrantproof" — and the agency's dispute with Apple over an iPhone used by one of the San Bernardino shooters shows the challenges encryption poses in criminal and counterterrorism investigations.

Apple is challenging a federal court order obtained by the FBI that compels the tech giant to write special software that would lift some security restrictions and let the FBI crack the passcode on the iPhone used by one of the San Bernardino shooters.

Comey, at the first congressional hearing on the issue of encryption since the beginning of their legal clash, said many companies have figured out a business model that allows them to provide data in compliance with warrants, while keeping information safe.

"From the founding of this country it was contemplated that law enforcement could go into your house with appropriate predication and oversight. So to me the logic of that means they wouldn't have imagined any box or storage area that couldn't be entered," said Comey.

"This entire country of ours is based on a balance. It's a hard one to strike, but it's so seductive to talk about privacy as an ultimate value in a society where we aspire to be safe, and have our families safe, and our children safe — that can't be true, we have to find a way to accommodate both."

Apple argues it has cooperated in the investigation as much as it can, but draws the line at creating a tool that CEO Tim Cook has called the software "equivalent of cancer" because it says the code the FBI is requesting would amount to a master key for its devices.

"That passcode is the cryptographic key," testified Apple General Counsel Bruce Sewell. "So essentially we are throwing open the doors and allowing the very act of decryption to take place."

Though the FBI earlier underscored that it is requesting very targeted computer code that would never have to leave Apple's hands, Apple paints this case as a major precedent. And at Tuesday's hearing, Comey acknowledged that the FBI would "potentially" turn back to Apple for more help unlocking other iPhones as well.

New York County District Attorney Cyrus Vance, another witness at the hearing, said his own office is currently locked out of 175 Apple devices obtained in investigations of a murder, sexual child abuse, sex trafficking, child pornography, assault and robbery.

Comey also conceded that a mistake was made in the first 24 hours of the investigation, when the FBI instructed San Bernardino county, which owns the phone as the shooter's employer, to reset the Apple ID password associated with the phone that ultimately made it extra hard to retrieve information from the device.

The Justice Department searched the iCloud backups associated with the phone, but those stopped several weeks before the Dec. 2 attack. It's unclear what exactly might be on the phone, but U.S. attorneys general have told the federal court in California that Apple's cooperation is crucial in the investigation: The phone's security prevents the FBI from having a computer guess the PIN code and could wipe the phone clean after 10 wrong tries, so the FBI wants Apple to override that security protection.

In one heated exchange, Rep. Darrell Issa, a Republican from California, pressed Comey specifically on that matter: whether the FBI was truly incapable of cracking into the phone or pulled out all the stops before trying to compel an unwilling party's cooperation.

"The FBI is the premier law enforcement organization with laboratories that are second to none in the world. Are you testifying today that you, and or contractors that you employ, could not achieve this without demanding an unwilling partner do it?" asked Issa.

"Correct," answered Comey, later elaborating: "We wouldn't be litigating if we could. We have engaged all parts of the U.S. government to see, does anybody have a way, short of asking Apple, to do it, with a 5C running iOS9, and we do not."

Though Comey said that the San Bernardino case should and will be settled in court, both Apple and its critics agree that the issue of government access to encrypted data on iPhones should be settled by lawmakers.

"The line between personal privacy and public safety should be drawn by Congress, Silicon Valley," Vance wrote in his prepared testimony. "In the absence of a uniform policy, our nation will effectively delegate the crafting of national security and law enforcement policy to boardrooms in Silicon Valley."

Apple, in turn, says the matter should be resolved by Congress instead of the court system, where it's currently pending.

"Should the FBI have the right to compel a company to produce a product it doesn't already make, to the FBI's exact specifications and for the FBI's use?" Sewell wrote in his prepared remarks. "The decisions should be made by you and your colleagues as representatives of the people, rather than through a warrant request based on a 220-year-old statute."

Known as the All Writs Act, the statute has been used before to compel companies, including Apple, to cooperate with investigations, according to the Department of Justice.

Tech companies including Google, Facebook, Microsoft and others are expected to file briefs in support of Apple in the U.S. District Court for the Central District of California, The Washington Post reports:

"Those involved say the swell of support is unparalleled, especially for a case at the magistrate judge level — the lowest level of the federal court system. The filings also indicate the level of anxiety among companies about the possibility of a legal precedent greatly expanding the limits of what the government can force a company to do in criminal and national security probes.

"Meanwhile, law enforcement groups and families of some of the 14 killed in the Dec. 2 attack in San Bernardino, Calif., are filing briefs in support of the government."

Apple's public position got a boost on Monday in another legal standoff involving a drug case in Brooklyn. A magistrate judge there ruled against federal investigators, rejecting their request for an All Writs order compelling Apple to help them bypass an iPhone passcode. That ruling isn't binding in other courts and it dealt with a different set of technical requests, but it hits on a similar theme of government access to encrypted data.

In Congress, House Homeland Security Committee Chairman Michael McCaul, a Texas Republican, and Senate Intelligence Committee member Mark Warner, a Virginia Democrat, have introduced a bill that would create a National Commission on Security and Technology Challenges, which would consist of 16 "experts representing all of the interests at stake so we can evaluate and improve America's security posture as technology — and our adversaries — evolve."

U.S. attorneys are due to respond to Apple's latest filing regarding the San Bernardino iPhone by March 10, and a court hearing is scheduled for March 22.