Accessibility links
Thousands Of Migrants Stuck In Bottleneck At Greece-Macedonia Border : The Two-Way Migrant numbers in Greece are soaring as countries farther north close their borders or put caps on migrants. The U.N. says Europe is "on the cusp of a largely self-induced humanitarian crisis."

Thousands Of Migrants Stuck In Bottleneck At Greece-Macedonia Border

Thousands Of Migrants Stuck In Bottleneck At Greece-Macedonia Border 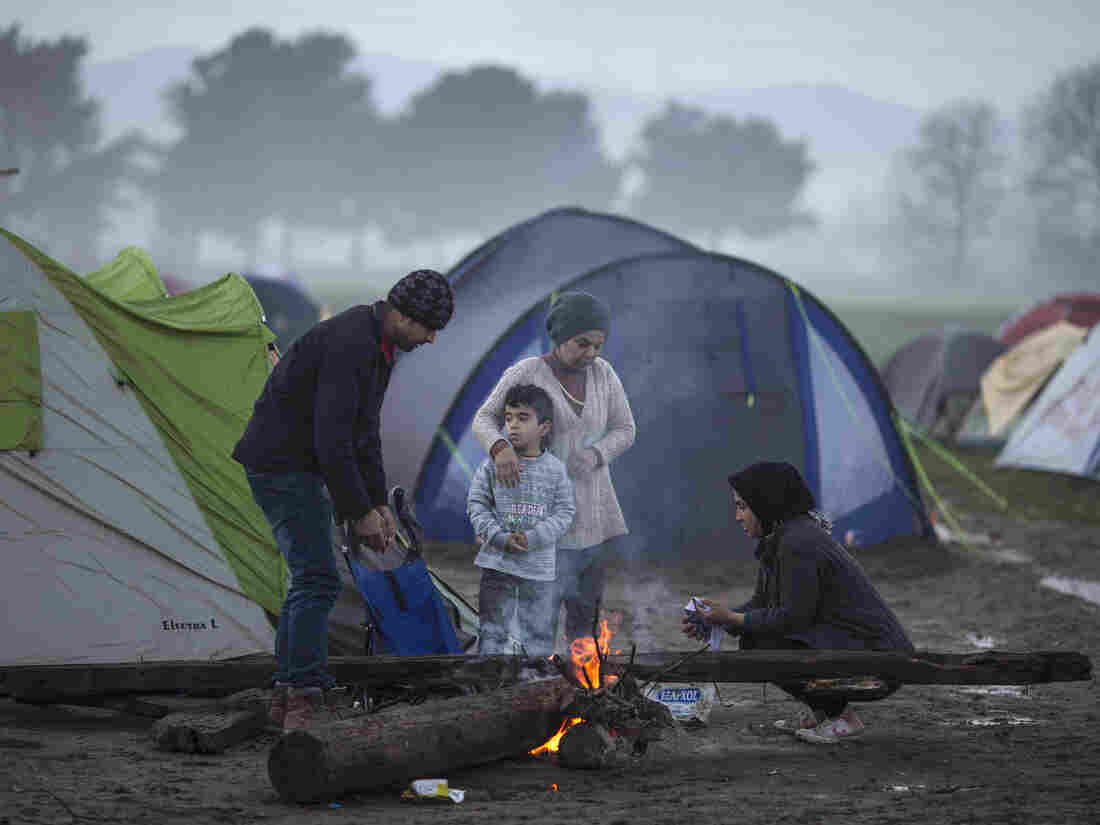 A family warms by a fire in the early morning on the Greek-Macedonia border on Tuesday in Idomeni, Greece. Dan Kitwood/Getty Images hide caption 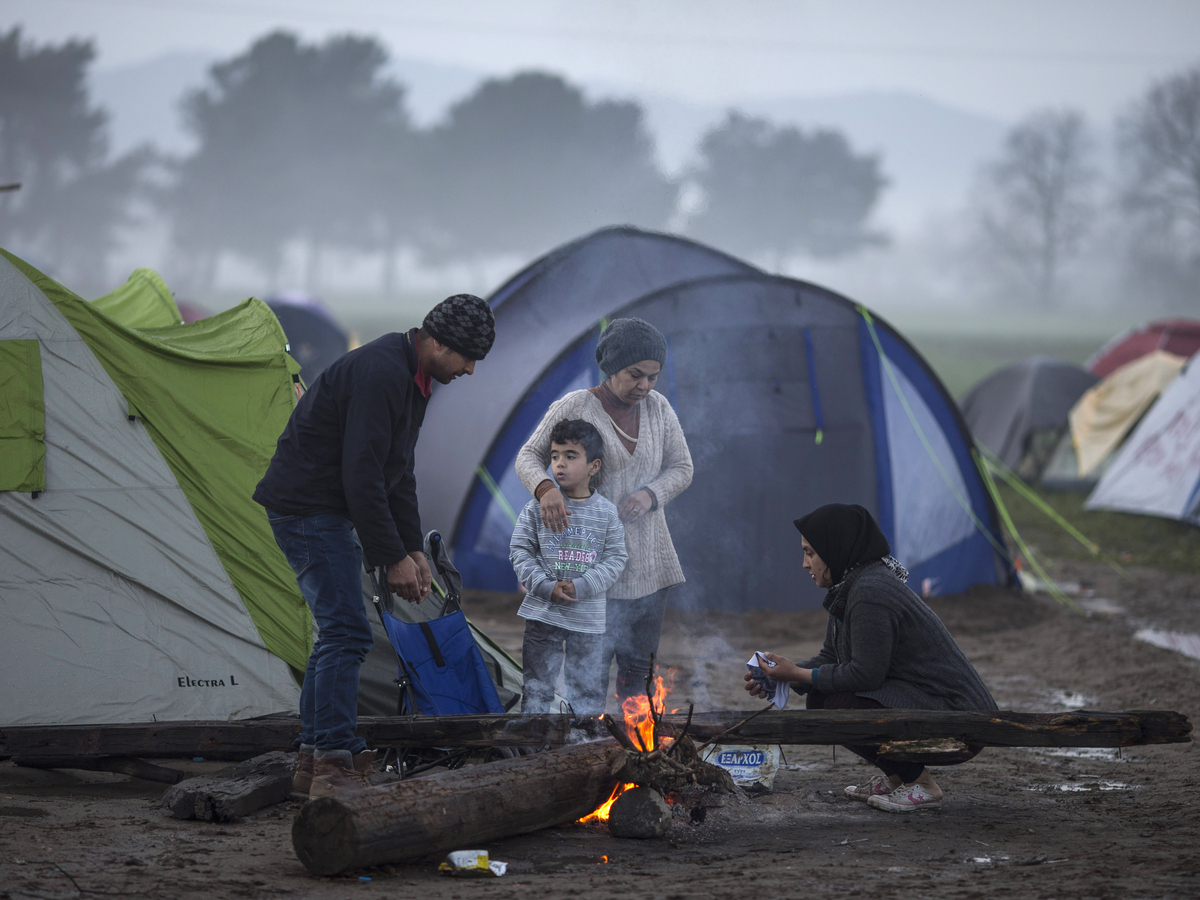 A family warms by a fire in the early morning on the Greek-Macedonia border on Tuesday in Idomeni, Greece.

As thousands of migrants wait to cross the border from Greece into Macedonia, the U.N. warns that Europe is "on the cusp of a largely self-induced humanitarian crisis." 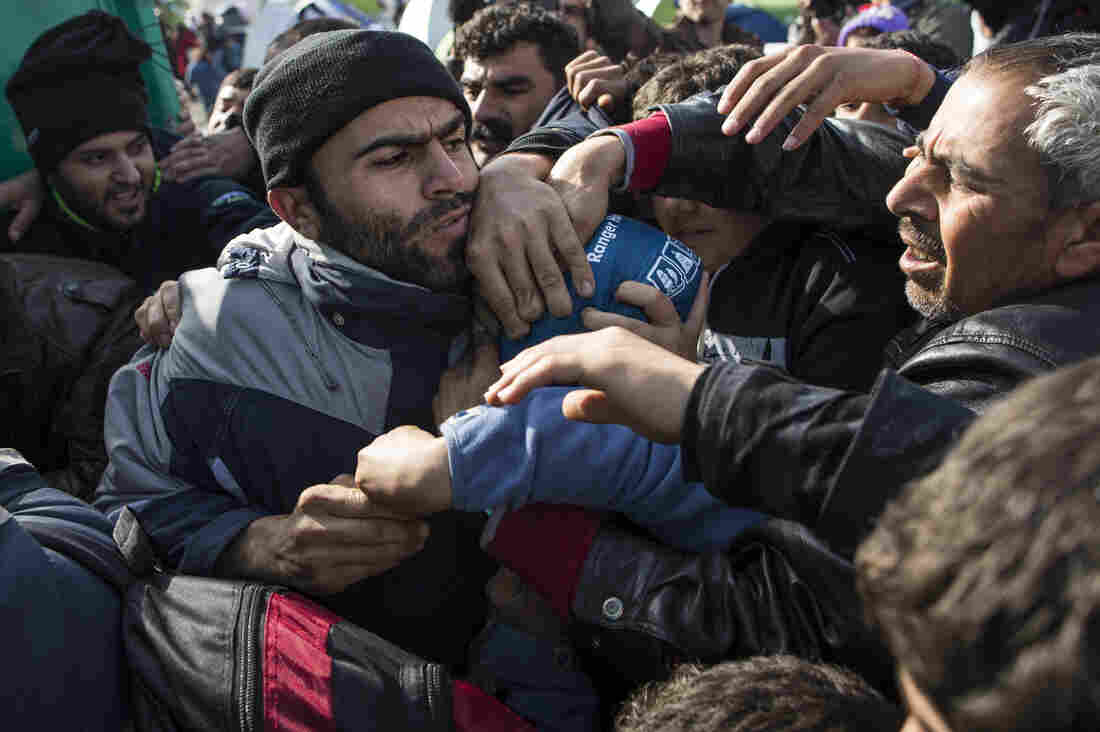 Refugees scrabble among each other as they stage a protest Tuesday along the Greek-Macedonia border near Idomeni. Dan Kitwood/Getty Images hide caption

The guards said they shut the crossing — a chain-link fence lined with coils of razor wire — because Macedonia's northern neighbor, Serbia, closed its border, the BBC adds.

Of the thousands of people waiting, only 30 have been allowed to pass so far Monday, The Associated Press reports.

The escalating situation comes just days after "several European nations, led by Austria, have imposed refugee caps and border restrictions over the past 10 days, creating a huge backlog of migrants into Greece," according to the wire service. "These unilateral actions have infuriated Greece and threatened to damage the unity of the 28-nation European Union."

The U.N.'s refugee agency estimates that around 8,500 people are waiting to cross at Idomeni, and of those, 1,500 spent Monday night outside. They're just part of the estimated 24,000 "refugees and migrants in Greece and needing accommodation," spokesman Adrian Edwards told reporters at a briefing in Geneva.

He warns of a possible humanitarian crisis:

"This is in light of a rapid build-up of people in an already struggling Greece, with governments not working together despite having already reached agreements in a number of areas, and country after country imposing new border restrictions. Inconsistent practices are causing unnecessary suffering and risk being at variance with EU and international law standards."

Edwards says Greek authorities are building another camp to increase the capacity.

They're trying to slow the growth of the burgeoning tent city along the border with Macedonia, outside of the official camp. Caroline Haga, an emergency coordinator for the International Committee of the Red Cross, describes the conditions there to the BBC:

"Many people here are soaking wet from having to sleep out in the open; it still dips below 10 here during the night.

"We are already seeing a lot of flu cases, especially among children, so imagine if they have to sleep outside in the wet again. It could turn into a very serious health problem."

Hassan Rasheed, a 27-year-old Iraqi, told the AP that he'd been in the Idomeni camp for 10 days. "Conditions are very bad. There are many ill children who are coughing, and we spent the night in this tent under heavy rain." 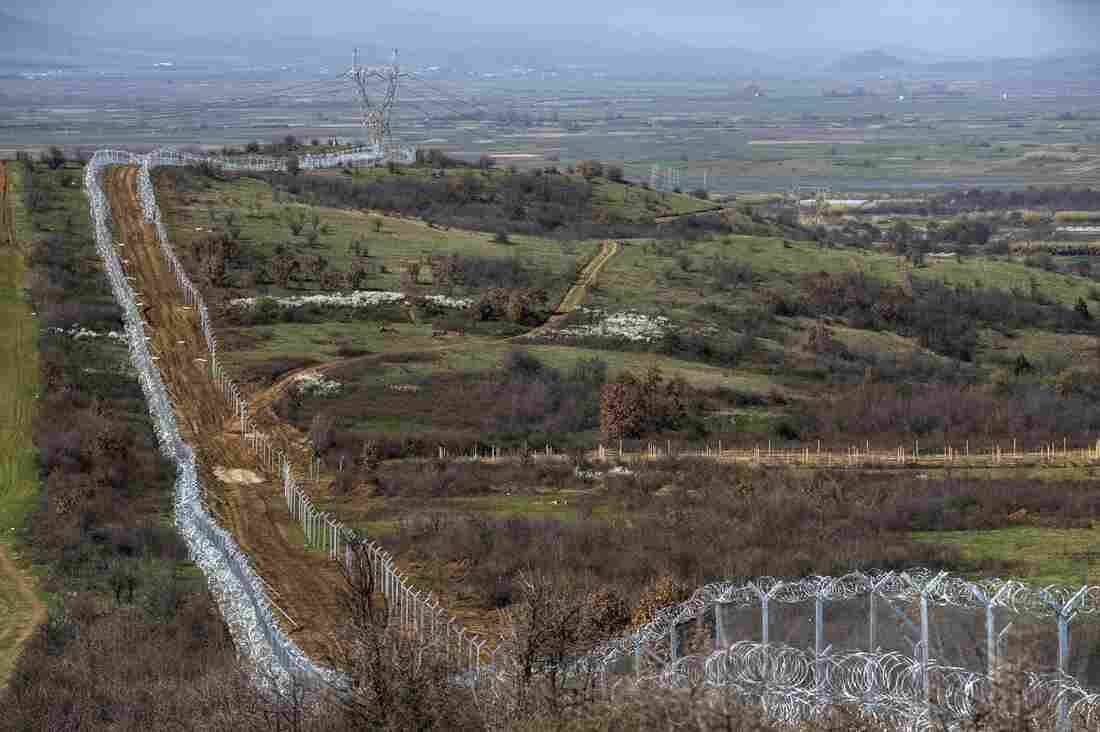 A general view along the Greek-Macedonia border on Tuesday near Idomeni. Dan Kitwood/Getty Images hide caption

In one stark example of the tensions, a group of people "who Macedonia says are mostly from Pakistan, have been stuck on the Macedonian side of the border between two razor-wire fences for three days," the wire service reports. Numbers vary on how many are in this group — the AP says 70, while a freelance photojournalist at the scene says in a post on Twitter that there were about 30.

An aid worker from the group Legis told the wire service that "Macedonian authorities had been trying to send them back to Greece illegally, but Greece refuses to take them back." He added that his group is providing the trapped migrants with food and other supplies.

#Idomeni: Roughly 30 men from countries like Pakistan wait to get pushed back from Macedonia to #Greece. pic.twitter.com/gupxtcVGJ8