Accessibility links
Chinese Newspaper Editor Fired Over 'Hidden' Headline Message : The Two-Way The headlines looked like everyday fare: coverage of a speech by President Xi Jinping and a politician's funeral. But a read of the characters vertically showed something else. 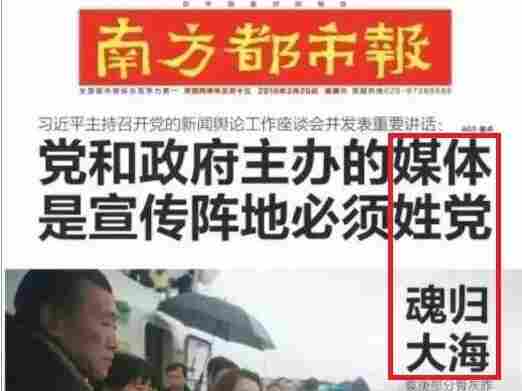 The front page of the Southern Metropolis Daily, with the alleged subversive message boxed in red. Screengrab by NPR hide caption

At first glance, the front-page headlines in China's Southern Metropolis Daily on Feb. 20 looked like normal fare: coverage of a speech by President Xi Jinping and a politician's funeral.

But read vertically, and there's a message that seems to criticize a government crackdown on the media.

NPR's Anthony Kuhn in Beijing reports that an editor at the major tabloid has been fired for allegedly sneaking in the subversive message, and walks us through what it says.

The top headline can be literally translated: "Party and government-run media are propaganda battlefronts, and must be surnamed 'Party.' In other words, they must be part of the same family," Anthony says.

(This was a day after Xi toured three main state media outlets with a clear message, as Anthony reported: "China's media must unflinchingly promote the party line and serve as a faithful tool of ideological struggle.")

The bottom headline reads: "His soul belongs to the sea." It's next to a photo of the sea burial of reformist figure Yuan Geng, the South China Morning Post reports.

If you read the last two characters of both vertically, Anthony says, "the implication is that the party is sentencing media to death by demanding political obedience from them." He adds that the paper's management "criticized itself for misleading its readers" in an internal message. The offending headlines appeared in a local edition in Shenzhen, China.

The Morning Post identifies the fired editor as Liu Yuxia, and adds that the paper's deputy chief editor "was issued a serious demerit on his record," according to leaked internal documents.

"That might seem obvious to outsiders, but China has for decades allowed a limited watchdog role for the press. And despite massive censorship, criticism of the ruling party and government are still common on China's social media."

So Xi's speech demanding total loyalty was seen as a shift.

The Committee to Protect Journalists says that in 2015, China jailed more journalists than any other country, with 49 behind bars.

In January, an opinion editor for Southern Metropolis mysteriously disappeared in Thailand, CPJ reported. Li Xin's disappearance came "after telling the international press in November he had fled China after being forced to work for years as a government informant."