Accessibility links
Brazil's Former President Lula Da Silva Targeted In Corruption Raid : The Two-Way Prosecutors say the search is aimed at uncovering evidence of possible payments and goods funneled from Petrobras, the national oil company, to Silva and his associates. 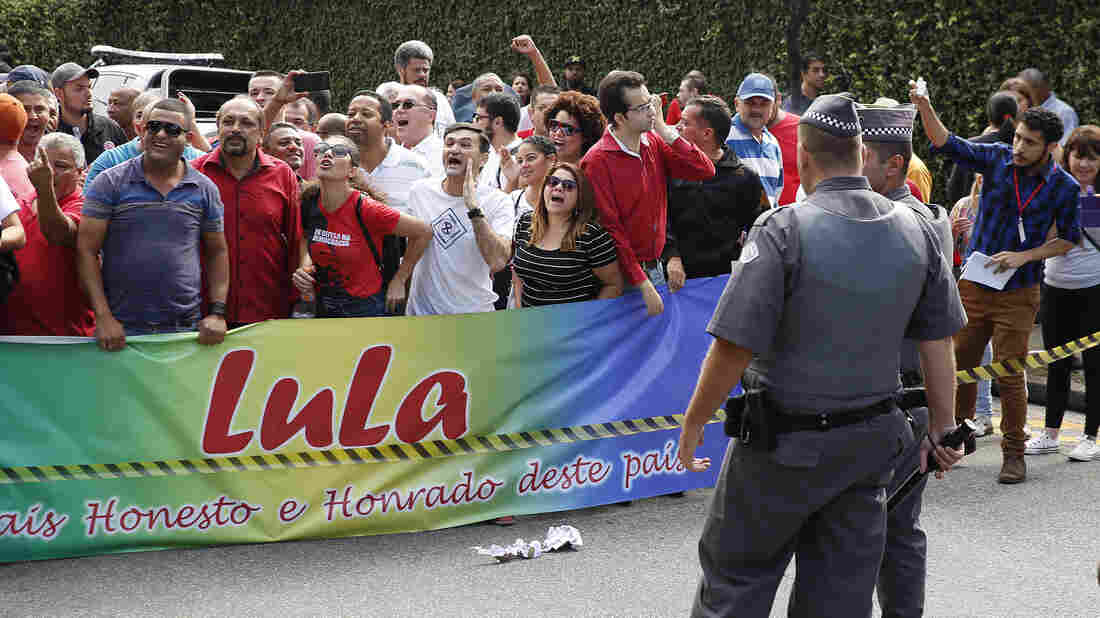 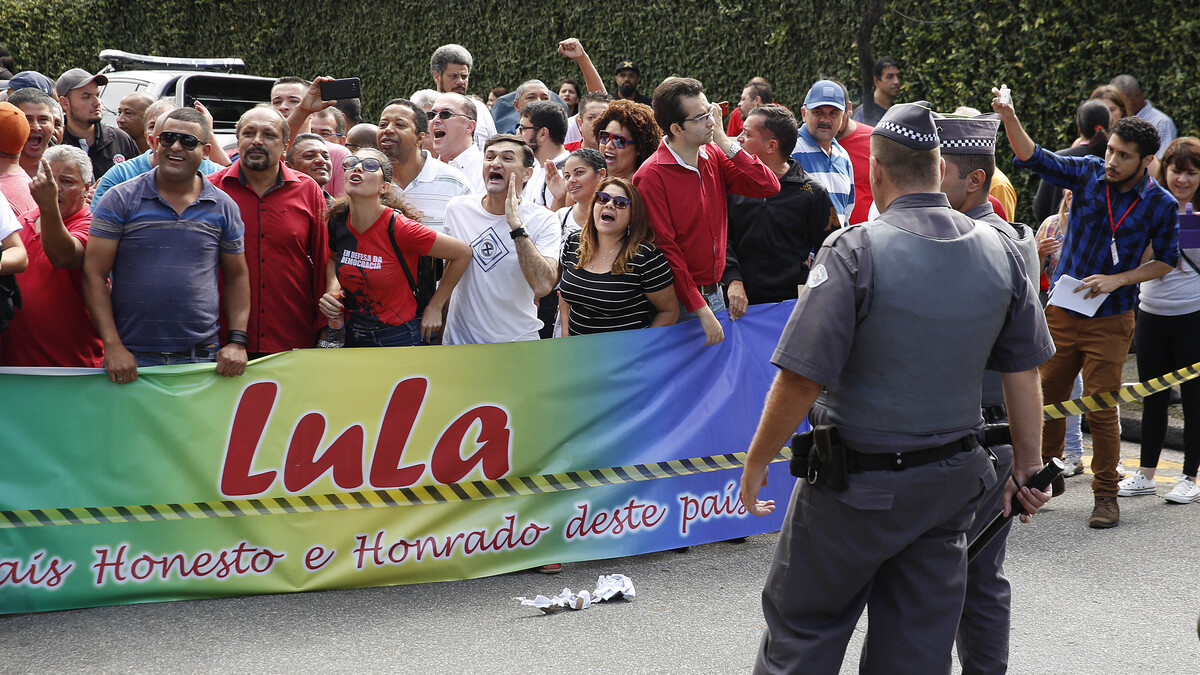 Demonstrators shout in support of Brazil's former President Luiz Inacio Lula da Silva outside his residence in the greater Sao Paulo area Friday. Police searched Silva's home and are questioning the former leader in relation to a corruption and money-laundering case.

Police conducted a dawn raid on the home of Brazil's former President Luiz Inacio Lula da Silva on Friday, with an extensive investigation into corruption and money-laundering now touching the man once dubbed "the most popular politician on Earth."

Federal police also questioned Silva; some media are reporting that the former leader has been detained, but the warrant calls for him to answer questions as part of the corruption probe involving the national oil company, Petrobras. Searches were carried out at several locations linked to Silva, including the homes of his son and other family members.

As news of the raid spread, Silva's supporters as well as his critics demonstrated outside his residence in a high-rise building in the Sao Paulo area. The raid comes at a tense time for the ruling Workers' Party, which has been in power in an era that began with Silva's first election in late 2002 and continues with the current president, Dilma Rousseff.

Prosecutors say they're building a case that alleges millions of dollars' worth of payments and goods were funneled from Petrobras, Brazil's biggest company, to Silva and his associates. An official prosecutor's statement lists real estate, construction work and luxury furniture as some of the alleged ill-gotten gains, along with suspicious cash donations.

The searches and questions for Silva come a month after Joao Santana, a key campaign strategist for both Silva and Rousseff, was arrested, with the authorities alleging that millions in illegal payments had been routed to Santana and his wife through foreign banks.

Rousseff has not been directly implicated, but as Silva's successor who also chaired Petrobras for much of his time in office, she is seen as deeply involved — particularly after news magazine IstoE reported this week that Sen. Delcidio do Amaral, an ally of Rousseff's in the Workers' Party, had implicated both Silva and Rousseff.

The magazine cited a lengthy statement attributed to Amaral that links the two leaders with both corruption and cover-ups; the statement was given to prosecutors before Amaral, who was arrested last November, left prison in February, IstoE says.

Today's raid represents a new phase of Operation Lava Jato — literally, "Jet Wash," but commonly translated as "Car Wash" — a sweeping corruption scandal whose name stems from the original case's roots in the use of gas stations to launder illegal funds.

Over several years, the investigation has grown to implicate dozens of politicians along with construction companies and Petrobras executives who are accused of taking part in a cycle of corruption in which the costs of bribes were built into contracts with the state-controlled oil company.

Announcing the raid Friday, the investigating court stated, "Although the ex- President deserves all the respect by virtue of the dignity of the office he held (without prejudice to the respect due to any person), that doesn't mean you're immune to investigation."