Accessibility links
Hulk Hogan Testifies In His $100 Million Lawsuit Against Gawker : The Two-Way The former professional wrestler's case over Gawker's release of a sex tape raises big questions about freedom of expression, privacy and celebrity.

Hulk Hogan Testifies In His $100 Million Lawsuit Against Gawker

Hulk Hogan Testifies In His $100 Million Lawsuit Against Gawker 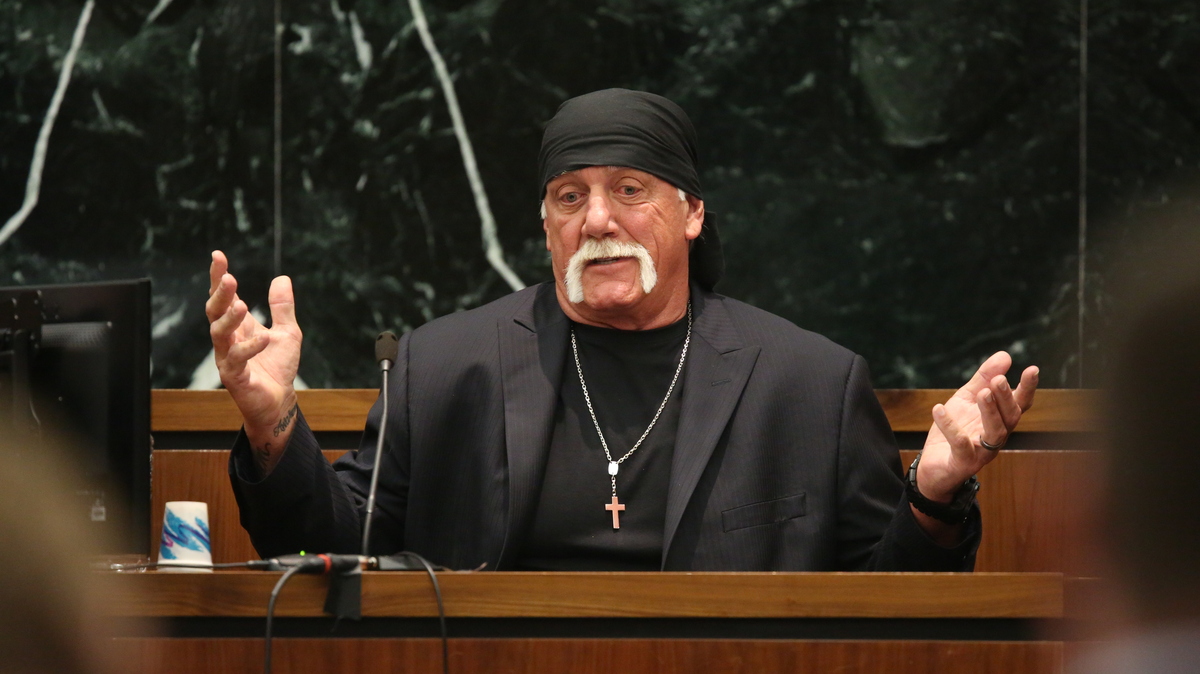 Hulk Hogan, whose real name is Terry Bollea, testifies in court on Tuesday during his trial against Gawker Media, in St Petersburg, Fla.

Former professional wrestler Hulk Hogan testified in his invasion of privacy suit in St. Petersburg, Fla., against the media organization Gawker, which published a portion of a sex tape.

The case raises major questions about freedom of expression, privacy and celebrity. That being said — "it really couldn't be seedier in terms of the topic that provoked this suit," as NPR's David Folkenflik told Here and Now.

The news and gossip site published a portion of a tape showing Hulk Hogan (whose legal name is Terry Bollea) having sex with the wife of a former friend. That's accompanied by a 1,400-word graphic description of the extended encounter. Bollea maintains he was unaware that they were being taped, and Gawker says an anonymous source mailed it to the organization.

Bollea is seeking $100 million in damages from Gawker.

The issue of whether this video is "newsworthy" was in focus in court today. Gawker argues that Bollea's "frequent public discussion of his sex life made the clip newsworthy and thus protected by the First Amendment."

"[Bollea] gently rebuffed attempts by Mr. Sullivan to paint him as someone who carelessly and routinely flaunted his sexuality and his conquests, and for whom even the most intimate personal details were fodder for publicity. Mr. Bollea insisted that any such disclosures in public were purely an act, a crucial component of his 'character' as Hulk Hogan."

Making the distinction between the character of Hogan and the person of Terry Bollea, he says he was playing Hogan in interviews where he discussed personal and intimate details of his sex life, his anatomy and his family.

"I'm kind of concerned about Hulk Hogan's privacy, but you kind of give it away," Bollea testified, according to the Times. "But in the privacy of your own home, no one invades my privacy."

Additionally, Bollea says he didn't have a problem with "news outlets discussing or even writing about the sex tape," The Associated Press reports. "It was only when Gawker broadcast an edited clip of the actual video that he said he began to suffer."

Gawker also rests its First Amendment argument on the claim that the video represents events truthfully:

"I am not going to make a case that the future of the Republic rises or falls on the ability of the general public to watch a video of Hulk Hogan f****** his friend's ex-wife. But the Constitution does unambiguously accord us the right to publish true things about public figures."

Conversely, Bollea's lawyers "cautioned that the privacy of many Americans could be compromised" as a result of the case, the Times reports.

Other recent cases have grappled with the issue of newsworthiness versus privacy.

David breaks down why a case about a sex tape could have significant implications for other kinds of news:

"If you're thinking about this from a legal perspective, the idea that a public figure can say what about his or her life you can publish or post and what you cannot is troubling. Because even if one concedes — as most reasonable human beings would — that this isn't something that should be out there, this isn't something he seems to have encouraged the filming of, this is not a video he wanted out there at all. He's not a pornographic actor — he should have the right for his sex ... he has the right for that, in a sense, one would think, not to get out.

"But if you cede that right to individuals to do it, then suddenly news organizations and citizens are suddenly having taken away from them the right to publish what we want. There are consequences to what we publish in this country — if you libel somebody that is something that you face consequences for. But the idea that pre-emptively you can prevent somebody from doing that is really deeply problematic."