Accessibility links
In A First, NFL Executive Admits Football Is Linked To Brain Damage : The Two-Way "Certainly yes," said Jeff Miller, the NFL's executive vice president for health and safety, when asked on Capitol Hill if football is linked to a degenerative brain disease. 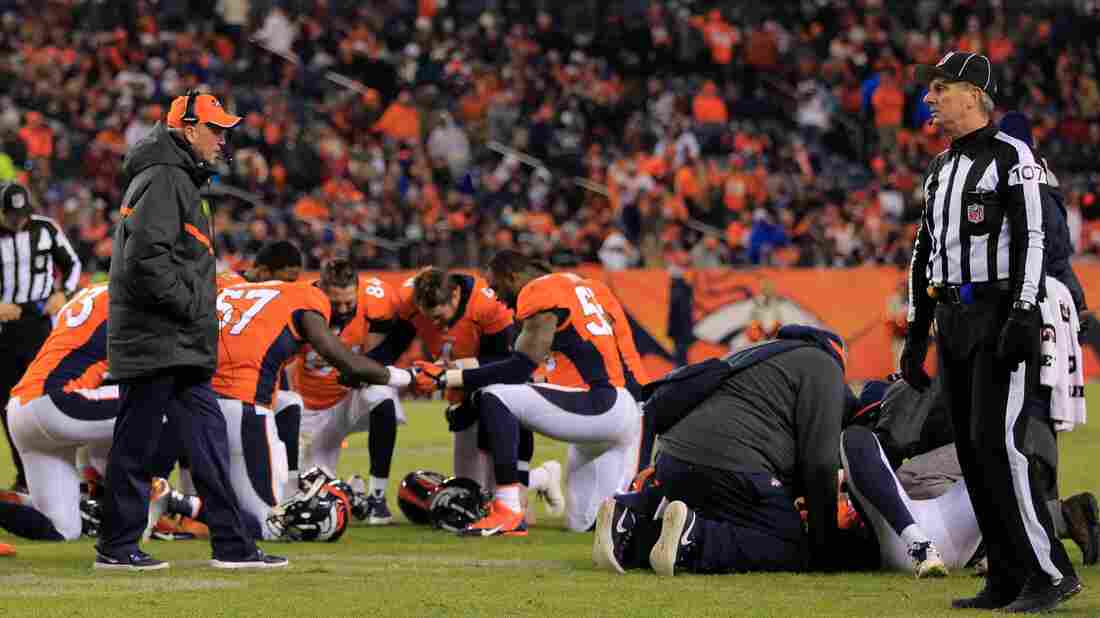 Before Monday, no NFL official had publicly acknowledged a link between football and chronic traumatic encephalopathy. Here, members of the Denver Broncos are seen after one of their teammates suffered a concussion during a game in late 2014. Doug Pensinger/Getty Images hide caption 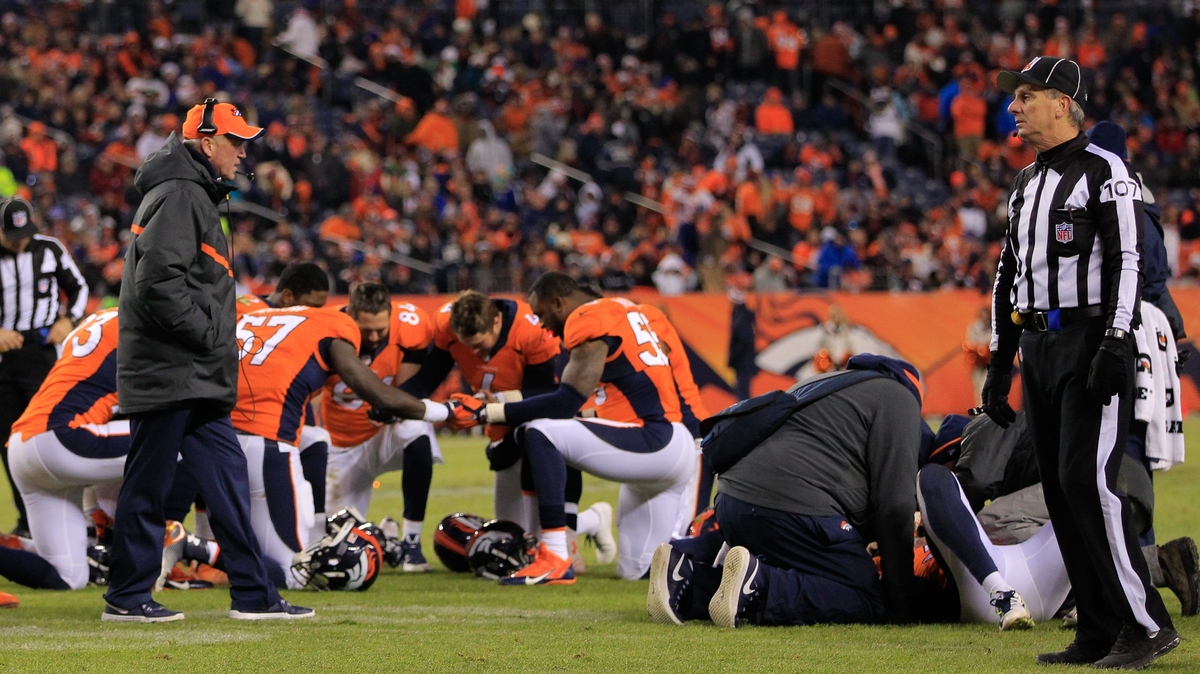 Before Monday, no NFL official had publicly acknowledged a link between football and chronic traumatic encephalopathy. Here, members of the Denver Broncos are seen after one of their teammates suffered a concussion during a game in late 2014.

A discussion on Capitol Hill about concussion research brought a startling moment Monday, as an NFL executive acknowledged for the first time that football has been linked to a degenerative brain disease.

Jeff Miller, the NFL's executive vice president for health and safety, admitted the connection when he was asked about research by Boston University neuropathologist Dr. Ann McKee, who has reported finding signs of chronic traumatic encephalopathy in the brains of 90 out of 94 former pro football players — and 45 out of 55 former college players.

Both Miller and McKee were testifying at the hearing by the House Committee on Energy & Commerce. After McKee urged taking steps "immediately" to limit the risk to young athletes, Rep. Jan Schakowsky, D-Ill., asked Miller if he thinks football and CTE are linked.

"Well certainly Dr. McKee's research shows that a number of retired NFL players were diagnosed with CTE, so the answer to that question is certainly yes," Miller said. He added, "but there's also a number of questions that come with that."

Schakowsky then reminded Miller that Dr. Mitchel Berger, a neurosurgeon who's also the NFL's lead physician on brain injuries, had said something very different as recently as this year, around the time of the Super Bowl.

As Steve Fainaru, an ESPN reporter who was at Monday's hearing, tells Morning Edition, Berger "answered no to the exact same question" that Miller was asked in Washington on Monday.

The NFL, Fainaru says, "has for years basically punted on this question. They've never really come close to acknowledging that football can cause brain damage. And that question has been at the center of a class-action lawsuit against the league, a lot of really bad publicity that the league has endured for years. So, I think for people who follow this, it was really quite surprising."

In recent seasons, the NFL has changed rules and protocols in an attempt to reduce the number and severity of helmet-to-helmet hits in the game. But in January, the league issued an injury report "that said the number of concussions diagnosed in 2015 had increased by 32 percent from the previous year."

For more context, we'll refer back to an interview with Dr. Bennet Omalu, the forensic pathologist who discovered CTE — and who was featured in the PBS Frontline special League of Denial: The NFL's Concussion Crisis.

Here's how Omalu answered a question about a closed meeting where he presented slides of his work to about seven people:

"One of the doctors there was a prominent NFL physician. So after the slide viewing, we started discussing the cases, the implications, and the NFL doctor at some point said to me, 'Bennet, do you know the implications of what you are doing?' I looked. He was on my left. I said, 'Yeah, I think I do.' He said, 'No, you don't.'

"So we continued talking, talking. At some point he interrupted me again: 'Bennet, so do you think you know the implications of what you are doing?' I said, 'I think I do; I don't know.' He said, 'No, you don't.'

"So we continued talking again. Then a third time he interrupted me, and I turned to him, and I said, 'OK, why don't you tell me what the implications are?' He said, 'OK, I'll tell you.' He said, 'Your work suggests or is suggesting or is proving that football is a dangerous sport, and that if 10 percent of mothers in this country would begin to perceive football as a dangerous sport, that is the end of football.'

"So I looked at him. I shrugged about it. And he said to me: 'So you need to be very careful. You need to tone it down. Don't speak to the press. Just focus on the science.' "