Accessibility links
Chaos In Brazil, As Judge Suspends Ex-President's Appointment As Chief Of Staff : The Two-Way Protests broke out in cities across Brazil overnight, and there were clashes at the presidential palace. Then a judge halted a move seen as a bid for legal immunity for Luiz Inacio Lula da Silva.

Chaos In Brazil, As Judge Suspends Ex-President's Appointment As Chief Of Staff

Chaos In Brazil, As Judge Suspends Ex-President's Appointment As Chief Of Staff 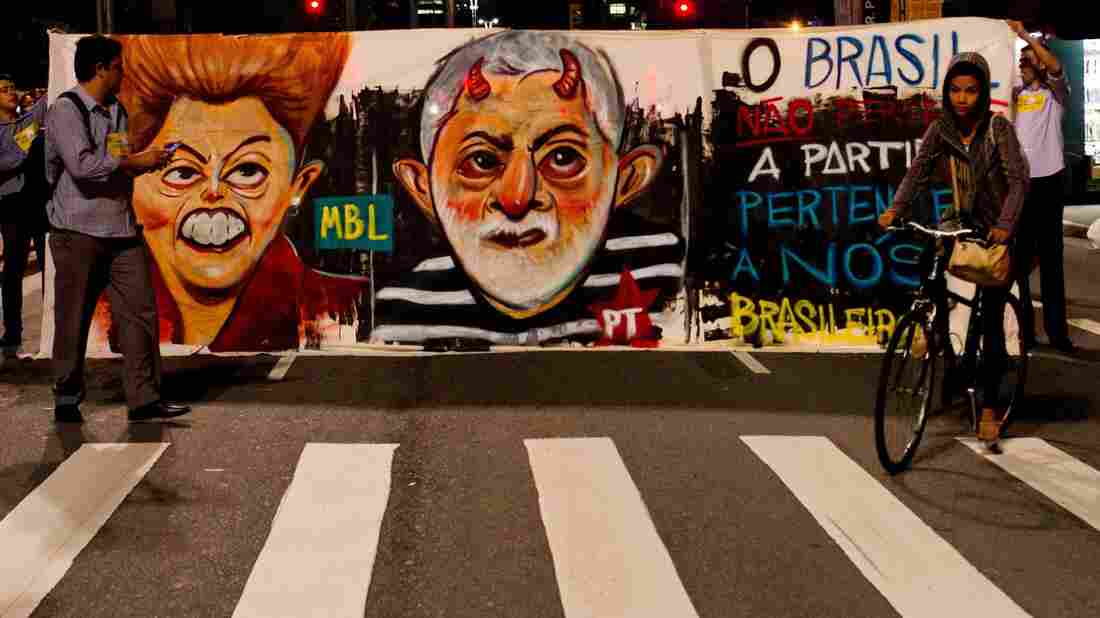 Protesters used a sign to vent their anger over President Dilma Rousseff appointing her embattled predecessor, Luis Inacio Lula da Silva, as her chief of staff — a move that shields him from prosecution. Both Lula and Rousseff have been confronted with questions from a massive corruption investigation. Anadolu Agency/Getty Images hide caption 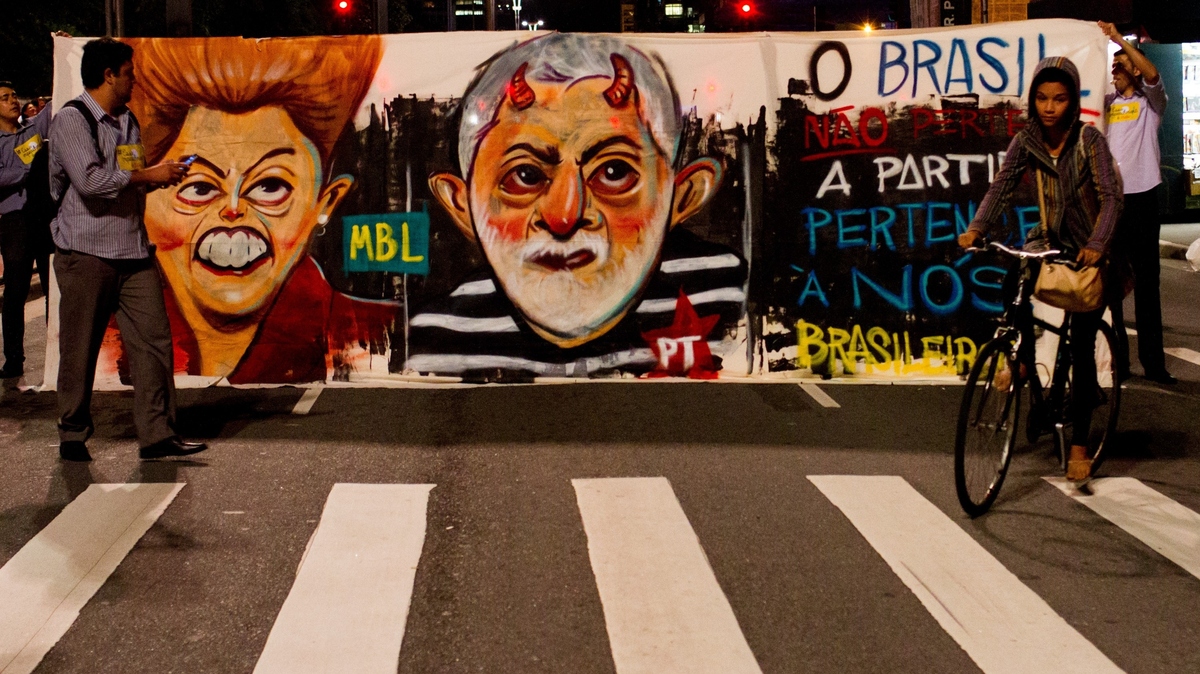 Protesters used a sign to vent their anger over President Dilma Rousseff appointing her embattled predecessor, Luis Inacio Lula da Silva, as her chief of staff — a move that shields him from prosecution. Both Lula and Rousseff have been confronted with questions from a massive corruption investigation.

With a corruption and money-laundering scandal rocking Brazil, lawmakers in that nation's lower house of congress have started the formal impeachment process against President Dilma Rousseff, forming a committee to look at potential charges.

But the most dramatic moments Thursday center on the presidential palace, where a ceremony to officially invest former President Luiz Inacio Lula da Silva as the current chief of staff "broke into chaos," NPR's Lourdes Garcia-Navarro reports.

After that scene erupted, a judge issued an injunction to suspend Lula's appointment, a move that had widely been seen as an attempt by Rousseff to shield Lula from possible corruption charges.

As for Rousseff, the move to impeach her stems — for now, at least — from allegations that are separate from those besetting Lula.

From Rio, Lourdes reports for our Newscast unit:

"The accusations revolve around allegations that she manipulated economic data in advance of her election last year, to hide the true state of the economy. The case is considered weak, but it comes amid the widening corruption scandal that has rocked the political establishment here.

"Rousseff's predecessor, Lula, has been implicated in graft at the state oil company. Rousseff appointed him her chief of staff, in a move that would shield him from prosecution.

"Protests broke out in several cities across Brazil overnight, and there were clashes in front of the presidential palace."

At the investment ceremony for Lula this morning, Lourdes says, a protester shouted, "Shame on you," — as Rousseff's party faithful chanted, "There will be no coup."

Late last night, a judge ordered the release of phone recordings of calls to and from Lula's phone, audio that was intercepted as part of a sweeping corruption investigation.

In one short exchange recorded by federal police, Lula is heard speaking to Brazil's sitting president, with Rousseff referring to a paper she's sending him in case he needs to use it. In Brazil, many people immediately interpreted the exchange as a discussion about contingency measures to obstruct the investigation and violate the constitution.

Rousseff finds herself at the intersection of the massive scandal that has swept up politicians and officials at the state-run oil giant Petrobras. From 2003 to 2010, she chaired Petrobras' board of directors — and for all but two of those years, she was also Lula's chief of staff.

"Prosecutors say they're building a case that alleges millions of dollars' worth of payments and goods were funneled from Petrobras, Brazil's biggest company, to Silva and his associates. An official prosecutor's statement lists real estate, construction work and luxury furniture as some of the alleged ill-gotten gains, along with suspicious cash donations."