Accessibility links
Michigan Gov. Rick Snyder: 'We All Failed The Families Of Flint' : The Two-Way Snyder and EPA Administrator Gina McCarthy testified before the House Committee on Oversight and Government Reform. During the hearing, there were multiple calls for their resignations. 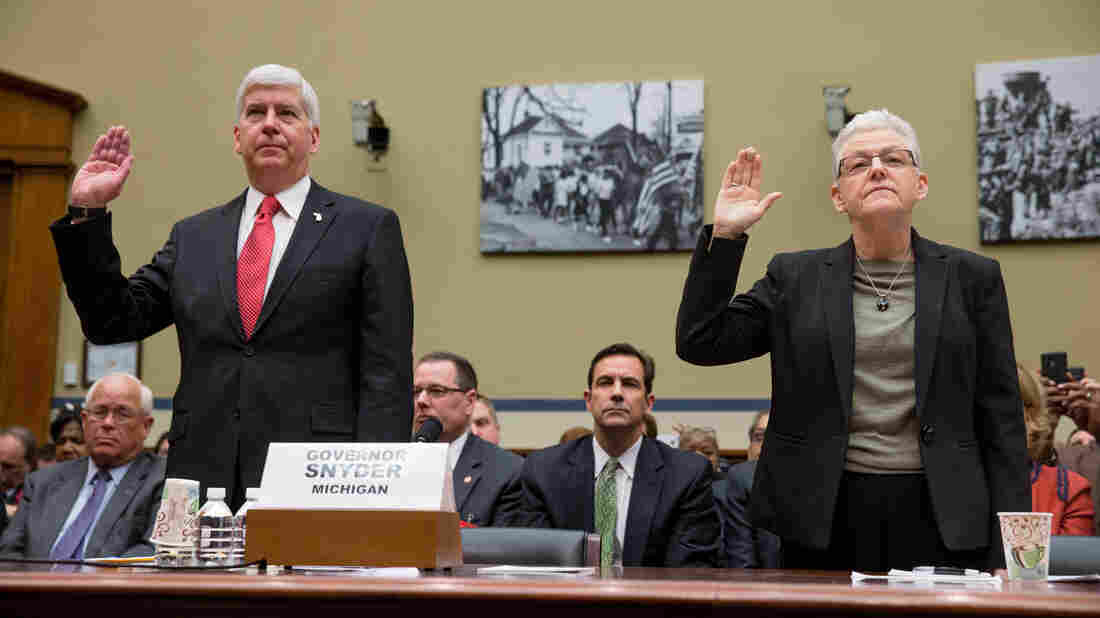 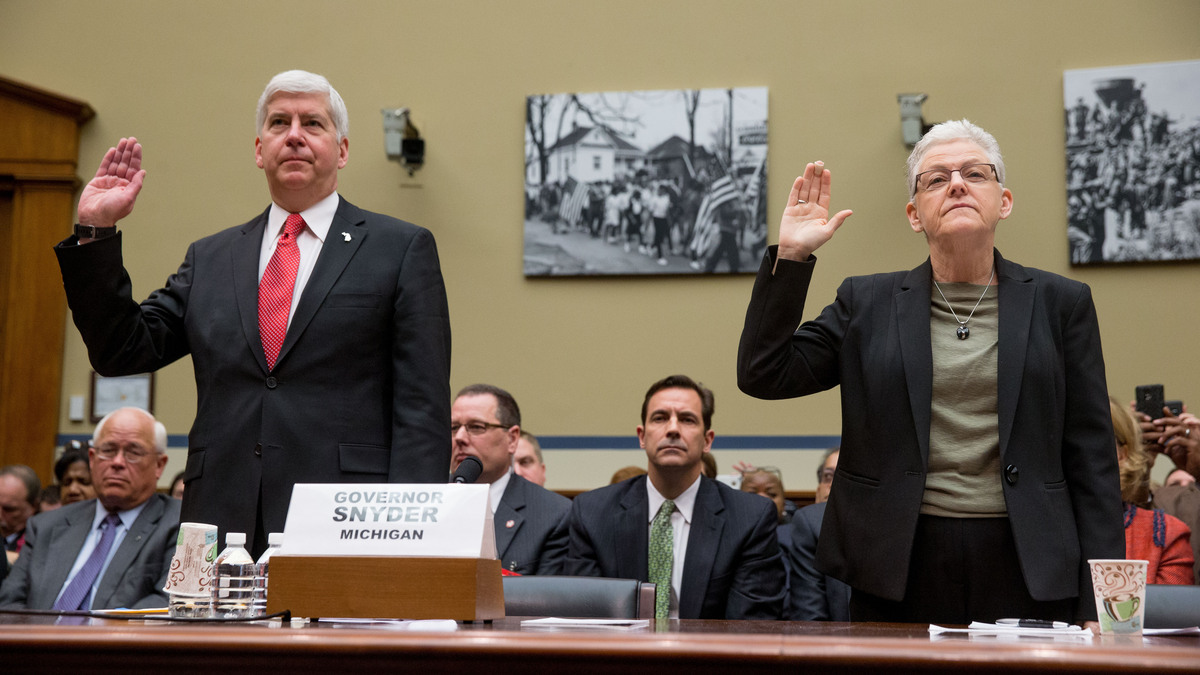 Michigan Gov. Rick Snyder and EPA Administrator Gina McCarthy are sworn in to testify before the House Oversight and Government Reform Committee hearing in Washington on Thursday.

"Let me be blunt," Michigan Gov. Rick Snyder said in his opening statement to the House Committee on Oversight and Government Reform. "This was a failure of government at all levels. Local, state and federal officials — we all failed the families of Flint."

He was answering questions at a Congressional hearing this morning that is investigating the lead-laced water crisis in Flint, Mich. EPA Administrator Gina McCarthy also testified at the hearing, which frequently became heated with multiple calls for their resignations.

Once such call came from Democratic Congressman Matt Cartwright.

"Governor, plausible deniability only works when it's plausible and I'm not buying that you didn't know about any of this until October 2015. You were not in a medically induced coma for a year," he said. "And I've had about enough of your false contrition and phony apologies."

As we have reported, the lead problem started after Flint switched to a new water source in 2014 to save money. Here's more:

"Water from that new source, the Flint River, was not adequately treated with corrosion controls and this caused lead from pipes to contaminate the water. The city switched back to its original source late last year, but the water remains unsafe."

"Not a day or night goes by that this tragedy doesn't weigh on my mind ... the questions I should have asked ... the answers I should have demanded ... how I could have prevented this," Snyder said.

You can watch the full hearing here:

The Republican governor places a hefty share of the blame on the "systematic failures" from Michigan's Department of Environmental Quality: "The fact is, bureaucrats created a culture that valued technical competence over common sense — and the result was that lead was leaching into residents' water."

He was pressed by Rep. Justin Amash, a Republican from Michigan, on what he was doing to change that culture. "It began by changing leadership," Snyder said. "I am going to be relentless in following up to make sure we make the changes necessary that this never happens again, whether it's in the water area or any area of our state."

At one point during questioning, a visibly exasperated Snyder insisted this wasn't solely his responsibility:

"We messed up in Michigan to begin with by doing two studies instead of corrosion controls. That fundamentally caused this problem. I have accepted responsibility because those people work for me. But it's something different to have this continuing dialogue, to say it was solely us. This could have been stopped sooner if other people had also spoken out."

Snyder also blamed the EPA: "Inefficient, ineffective and unaccountable bureaucrats at the EPA allowed this disaster to continue unnecessarily."

During a heated line of questioning of the EPA's Gina McCarthy, Rep. John Mica, a Republican from Florida, shook an internal EPA report that signaled concerns about lead levels months before the agency took formal action. "Did you see this report?" he asked. "A high school student could take this report and determine that kids were getting poisoned. ... We've heard calls for resignation — I think you should be at the top of that list."

McCarthy replied: "Because of the complexity of lead, we did not and could not have made a concerted judgement about whether it was a systemic problem." She added that the Michigan Department of Environmental Quality told the EPA earlier that they had implemented corrosion controls in Flint, when they hadn't actually done so.

"We were strong-armed, we were misled, we were kept at arm's length, we couldn't do our jobs effectively," she added.

And as she defended her record, panel Chairman Jason Chaffetz, a Republican from Utah, fired back: "There are a lot of people in this audience from Flint. Nobody believes that you took action."

This is the third hearing on the Flint water crisis. Snyder did not testify during the earlier sessions.

Michigan Radio's Steve Carmody reports on Morning Edition that Snyder is losing support in Michigan in the wake of the crisis. "In the past six months, Snyder's approval rating has fallen about 30 percentage points. Quite a reversal for a soft-spoken businessman turned politician, once thought to have national appeal."

But Snyder says he won't resign: "My commitment is to fix the problem."

For some of the people in Flint, however, that commitment comes too late. NPR's Rick Pluta, reporting for All Things Considered, spoke to Nakiya Wakes, who came to Capitol Hill from Flint by bus caravan.

"While Wakes says she doesn't feel any closer to getting answers, she says she did get one thing out of her trip to DC," Rick says. "She got to take a bath at the hotel, and drink water right out of the tap."