Accessibility links
Belgian Authorities Identify Third Suspected Bomber In Brussels Attacks : The Two-Way The man on the left in a widely circulated surveillance image is 24-year-old Najim Laachraoui, according to the Belgian federal prosecutor's office. 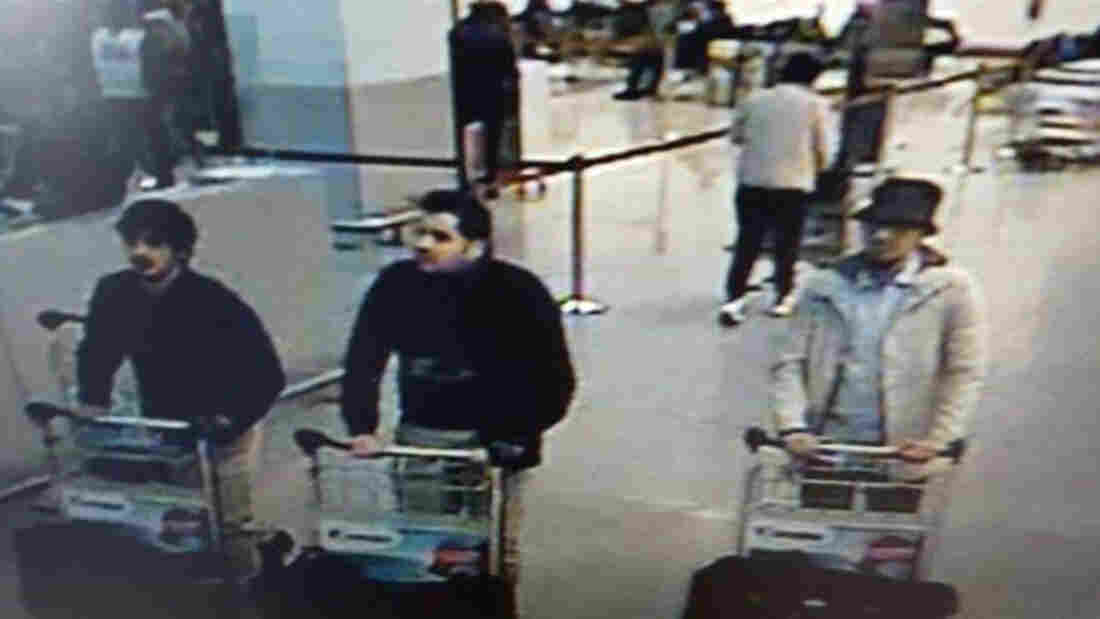 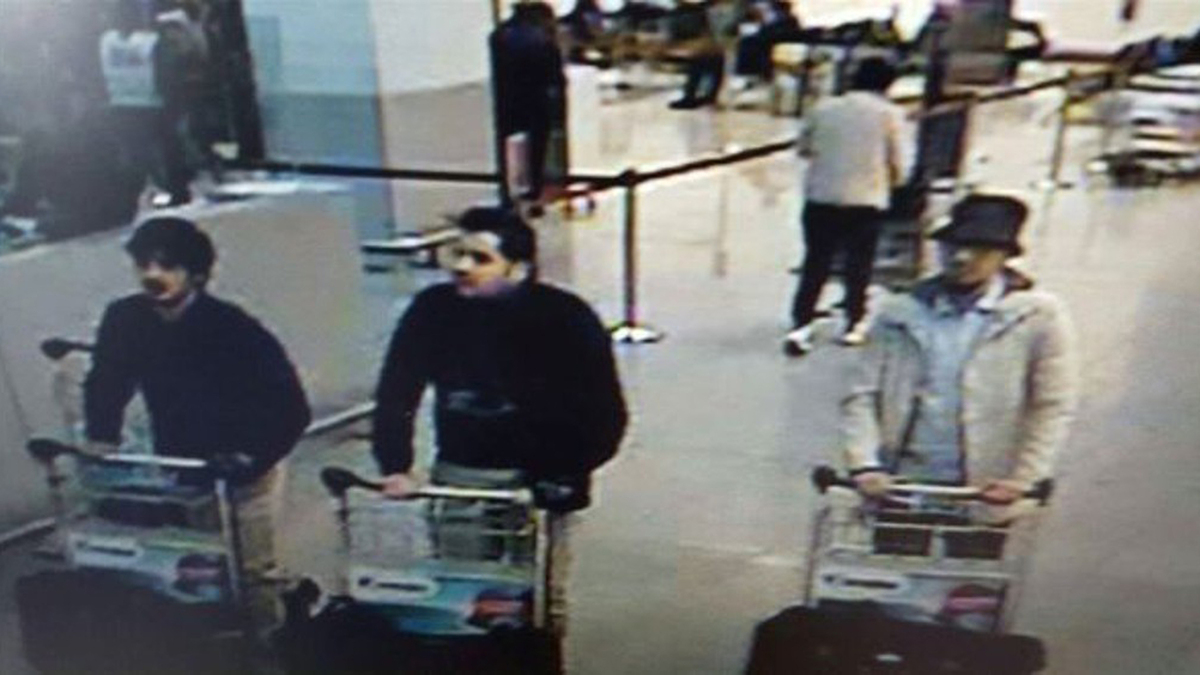 Authorities have identified a third suspected suicide bomber in the terrorist attacks on Brussels this week.

A Belgian federal prosecutor's statement says the person seen on the left in a widely circulated surveillance footage still, previously identified as a suspected attacker, is 24-year-old Najim Laachraoui.

Counterterrorism officials have suggested Laachraoui made the bombs used in the deadly attack on Brussels on Tuesday, when two explosions at the Brussels Airport and one in a metro station killed at least 31 people and injured hundreds. Laachraoui's fingerprints were found on the luggage bombs used Tuesday as well as explosive vests that were used in Paris, NPR's Dina Temple-Raston reports, citing counterterrorism officials in the U.S. and Europe.

The attacks were claimed by the Islamic State.

Police in Belgium are continuing to investigate the attacks — most recently with a military-style police operation in the Brussels neighborhood of Schaerbeek, which a local official says is now over.

Americans Were Among Those Killed In Brussels Attacks, Kerry Says

Meanwhile, U.S. Secretary of State John Kerry has arrived in Brussels, where he is meeting with officials to discuss this week's terrorist attack and offering his condolences to victims and their families. Kerry confirmed that Americans were among the dead.

"The United States stands firmly with Belgium and with the nations of Europe in the face of this tragedy," Kerry said Friday, according to the AP.

"We — all of us representing countless nationalities — have a message for those who inspired or carried out the attacks here or in Paris, or Ankara, or Tunis, or San Bernardino, or elsewhere: We will not be intimidated. We will not be deterred. We will come back with greater resolve — with greater strength — and we will not rest until we have eliminated your nihilistic beliefs and cowardice from the face of the Earth."

Police rounded up six people Thursday night in connection with the attacks. Three of them were detained right in front of the prosecutor's office; of those three, two have been released and one remains in custody. The identities of the people detained have not been released.

Raids took place in various parts of Brussels on Thursday, including in the city center, according to reports. 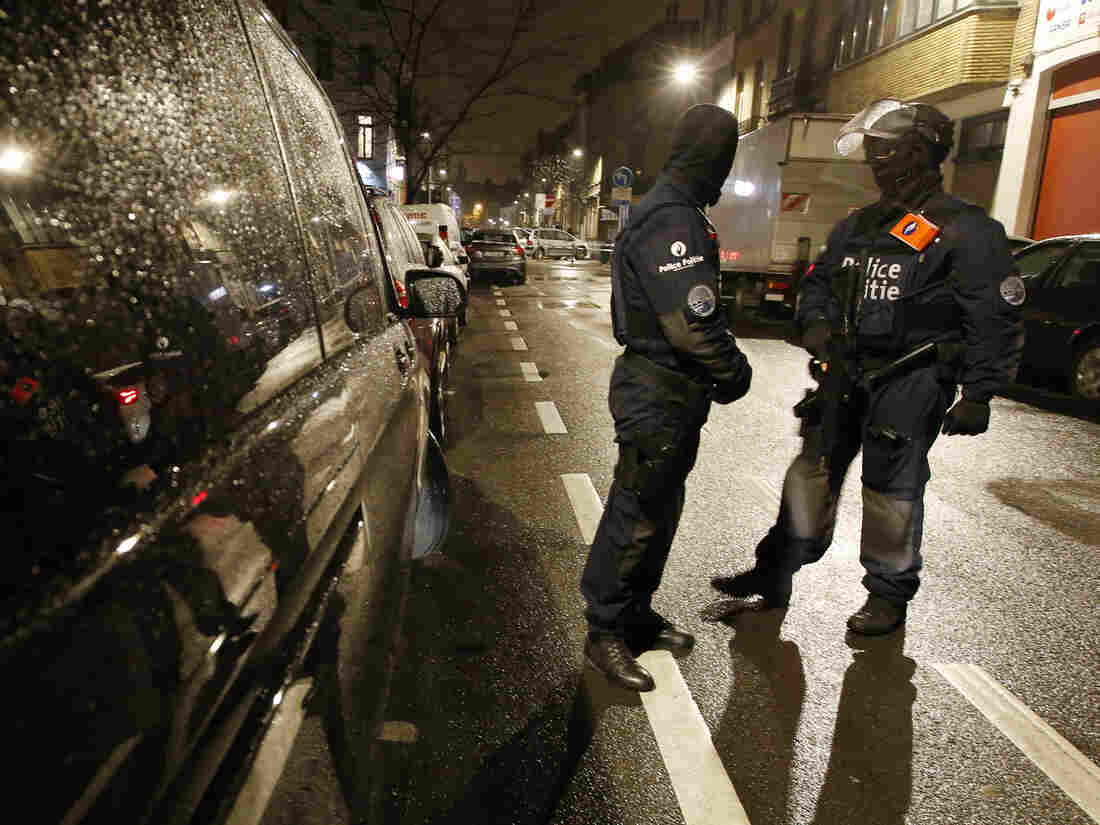 Police stand at a checkpoint during a raid in the suburb of Schaerbeek in Brussels on Thursday. Alastair Grant/AP hide caption 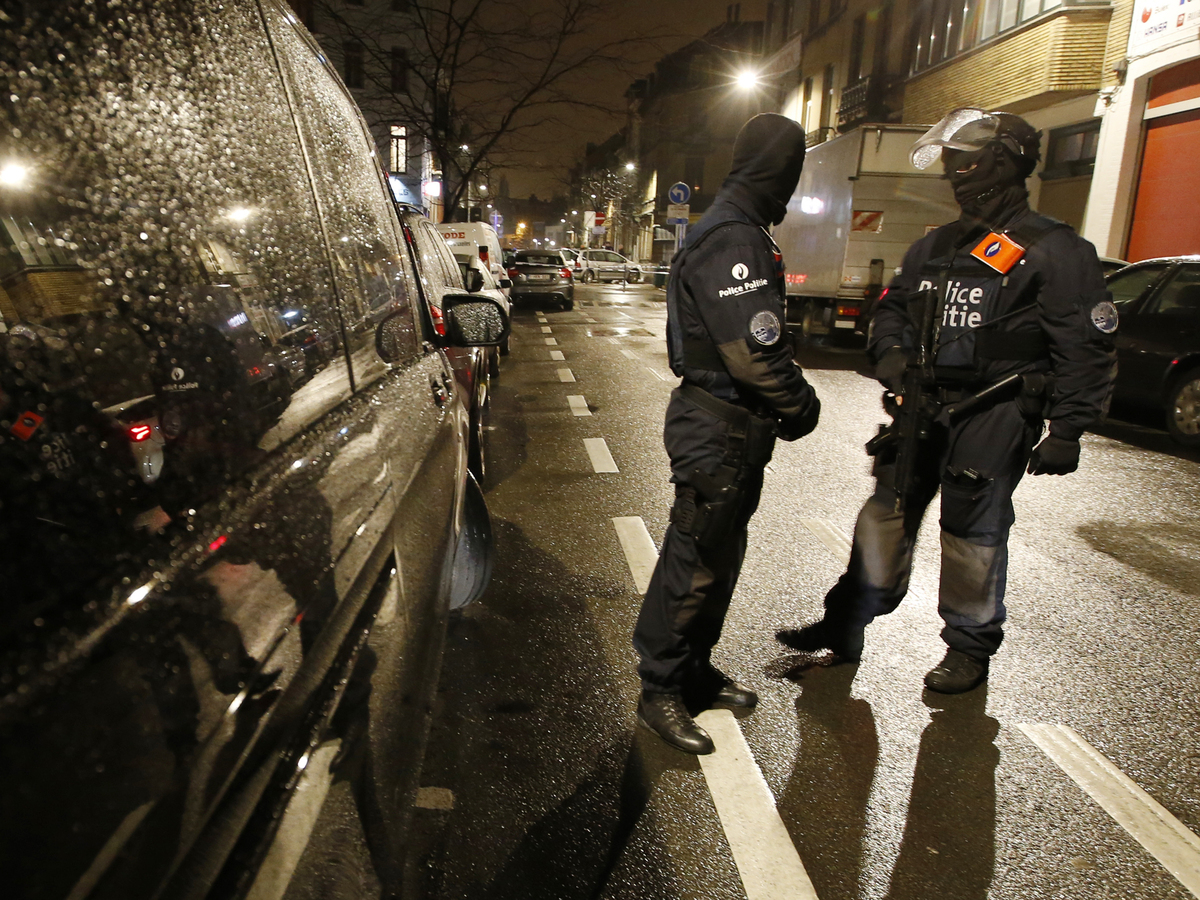 Police stand at a checkpoint during a raid in the suburb of Schaerbeek in Brussels on Thursday.

Also on Thursday, police arrested a man in Paris who they said was in the advanced stages of plotting a terrorist attack. That man has since been identified as Reda Kriket.

As Belgium begins the last of three official days of mourning, investigators are still searching for other potential attackers and accomplices.

In addition to identifying Laachraoui, police have named two other the suspected suicide bombers in the attacks on Brussels' main airport and a busy metro station: Brussels-born brothers Ibrahim and Khalid El Bakraoui. Officials say they believe Ibrahim was one of the airport bombers and Khalid was at the Maelbeek metro attack and that both brothers are dead. U.S. officials said Thursday that they were on an American terrorism watch list.

Officials are looking for another unidentified man seen on the surveillance video with Ibrahim and Laachraoui at the Brussels Airport on Tuesday. There is a question as to whether there may also have been a second attacker at the metro bombing.

The Brussels Airport will be closed at least through Sunday.

Meanwhile, two top officials have attempted to resign over the Belgian government's failure to prevent the bombings.

"The interior and justice ministers offered their resignations over administration missteps leading up to Tuesday's attacks. Prime Minister Charles Michel refused to let them quit. This, after Turkey said it had arrested and deported alleged suicide bomber Ibrahim Bakraoui last year as a suspected terrorist, informing Belgian diplomats in Turkey.

"Appearing on national television, the ministers acknowledged Belgium should have arrested Bakraoui, as his travel violated his parole. He went on to launch the suicide attack at Brussels Airport."