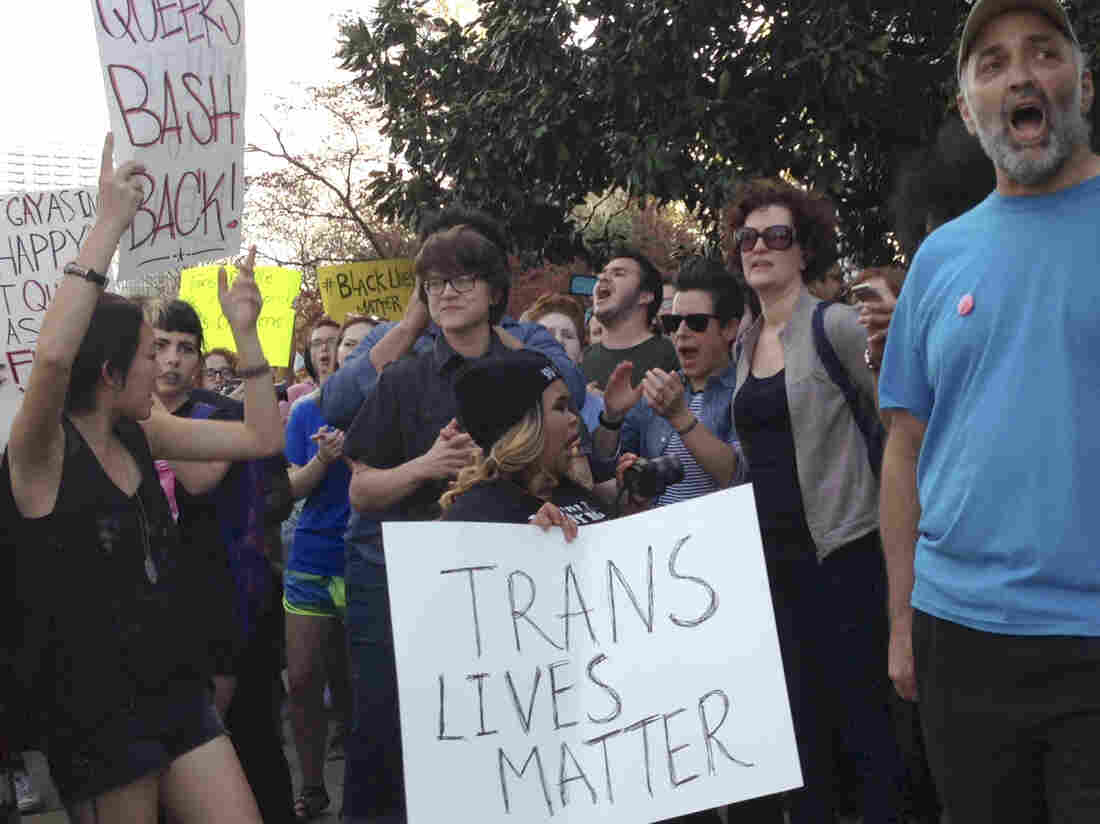 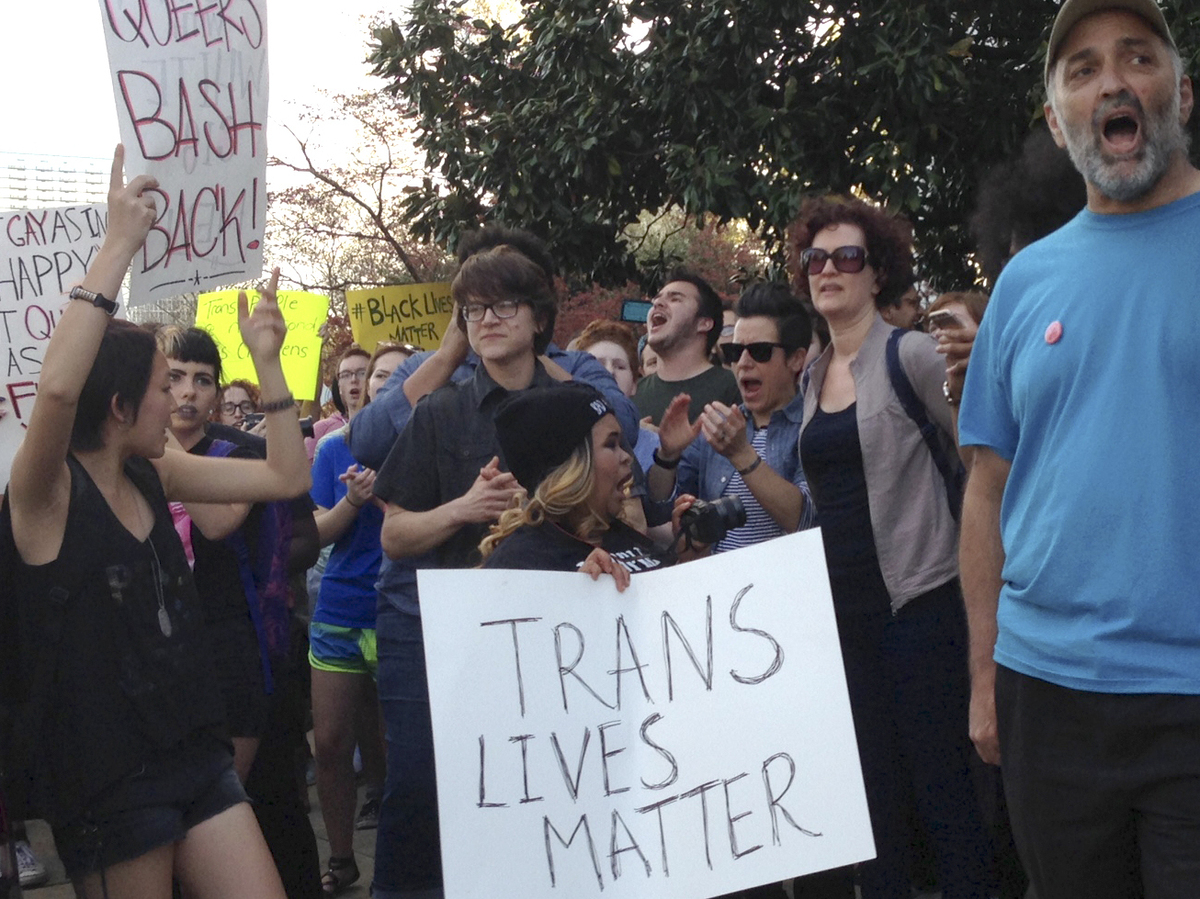 People protest outside the North Carolina Executive Mansion in Raleigh, N.C., on Thursday.

The American Civil Liberties Union of North Carolina and several other plaintiffs have filed a federal lawsuit over a North Carolina law they say discriminates against the state's LGBT community.

The law, passed last week in a special session by the state's Legislature and signed by Gov. Pat McCrory, blocks "local governments from passing anti-discrimination rules to grant protections to gay and transgender people," as we reported.

The law was signed a month after the city of Charlotte "passed a measure protecting gay, lesbian, bisexual and transgender people from being discriminated against by businesses," as we reported Thursday.

Perhaps the most widely discussed aspect of the new law is its impact on bathrooms. The legislation states that single-sex bathrooms and changing facilities can be used only by individuals who have that sex on their birth certificates. The governor said in a statement that this prevents a "breach of basic privacy and etiquette."

Trans people say it is psychologically harmful and places them at physical risk.

"Like so many others across the country, we are concerned about the potential harmful impact of this law, especially on transgender youth, and believe it is mean-spirited and sends the wrong message," White House press secretary Josh Earnest said in a statement to BuzzFeed.

Chris Brooks, legal director for the North Carolina ACLU, spelled out the group's reasons for the lawsuit at a press conference Monday.

"We are asking the court to overturn House Bill 2 because it is unconstitutional, because it violates the Equal Protection and due process clauses of the Fourteenth Amendment, because it discriminates on the basis of sex and sexual orientation, and because it is an invasion of privacy for transgender men and transgender women," Brooks told reporters.

"The U.S. Department of Education has determined that sexual identity and gender identity fall under the federal nondiscrimination law, specifically the provision that bans discrimination because of sex. Title IX requires all educational institutions which receive federal money to adhere to that and other nondiscrimination rules, and that is key to this particular case."

Therefore, Tom says, this law "could endanger the $4.5 billion North Carolina receives in Title IX federal funding," though he adds that not all of that money goes to the UNC system.

"Like the two transgender plaintiffs in the case, transgender people around the state of North Carolina immediately suffered harm under H.B. 2 in that they are not able to access public restrooms and other single-sex facilities that accord with their gender identity," the ACLU lawsuit states. "LGBT people are also harmed by H.B. 2 in that it strips them of or bars them from anti-discrimination protections under local law."

Here's more from the court documents:

"The painful message of stigma sent by H.B. 2 echoes the dehumanizing rhetoric employed by a number of lawmakers, suggesting that transgender people are somehow predatory or dangerous to others. In fact, it is H.B. 2 that exposes transgender people to harassment and potential violence.

"Transgender people are already disproportionately targeted for physical violence and harassment in North Carolina and across the country. When a transgender person is forced to disclose their transgender status to strangers, such disclosure puts them at a high risk of violence."

Additionally, The Associated Press reported that "many corporations and business leaders across the country have condemned the law."

Tom Bullock reports on All Things Considered that the attorney general of North Carolina says he will not defend the law as his office would normally do. Attorney General Roy Cooper said, "House Bill 2 is unconstitutional. Therefore our office will not represent the defendants in this lawsuit nor future lawsuits."

Tom adds that the state will have to hire outside counsel to defend the law in court.