Accessibility links
U.S. Geology Maps Reveal Areas Vulnerable To Man-Made Quakes : The Two-Way Parts of Oklahoma and Texas have about the same risk of an earthquake as parts of California, the maps show. Why? Wastewater that oil and gas operations are pumping into wells adds pressure on faults. 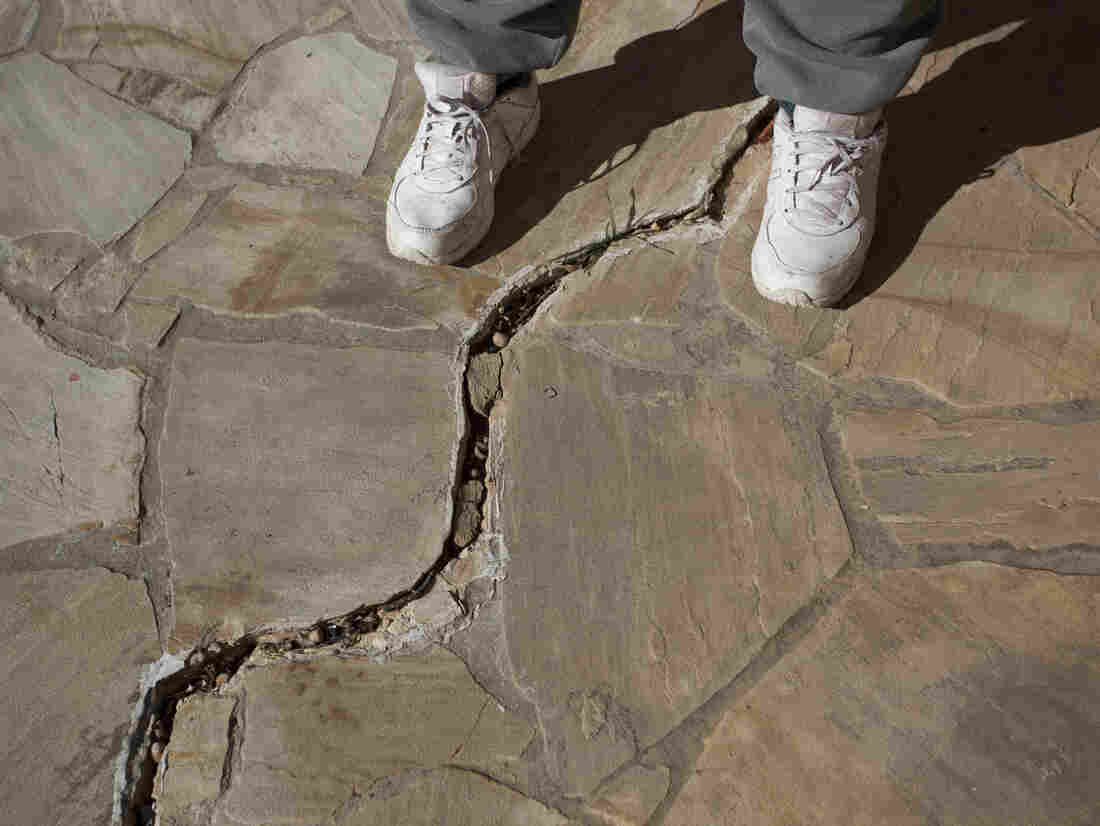 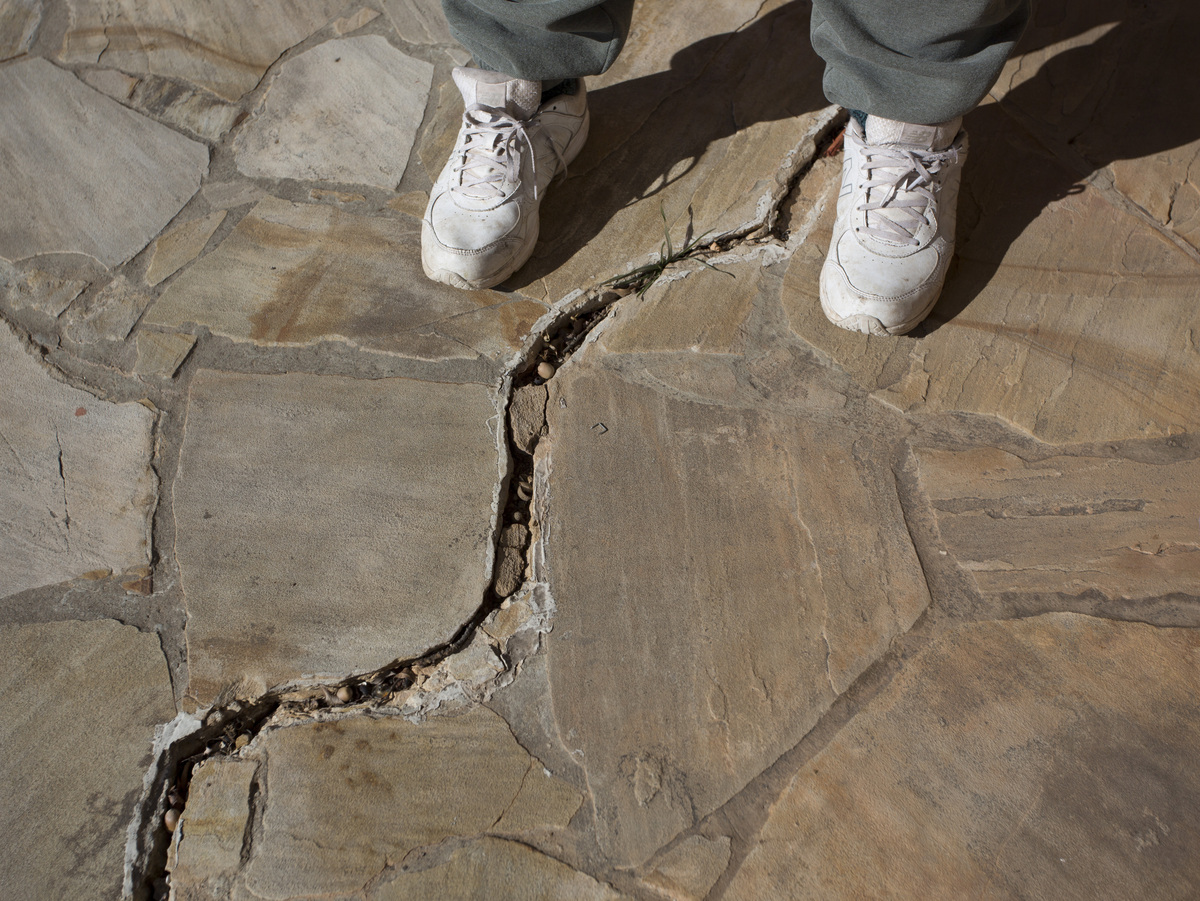 Large cracks in the sidewalk in Coyle, Okla., appeared after several earthquakes on Jan. 24.

Some parts of Oklahoma and Texas now have about the same risk of an earthquake as parts of California, according to the U.S. Geological Survey.

The big difference is, the quakes in Oklahoma and Texas are "induced" — they're caused by oil and gas operations that pump wastewater down into underground wells.

USGS scientists have now published the first maps of these new quake zones, and they're an eye-opener. An eye-opener because 7 million people are now, suddenly, living in quake zones. There are 21 hot spots where the quakes are concentrated; they're in places where, historically, noticeable earthquakes were rare: Texas, Colorado, Arkansas, Kansas, New Mexico and Oklahoma. Ohio and Alabama have also experienced some induced quakes.

USGS Forecast For Damage from Natural And Induced Earthquakes In 2016

This USGS map displays potential to experience damage from natural or human-induced earthquakes in 2016. Chances range from less than 1 percent to 12 percent. 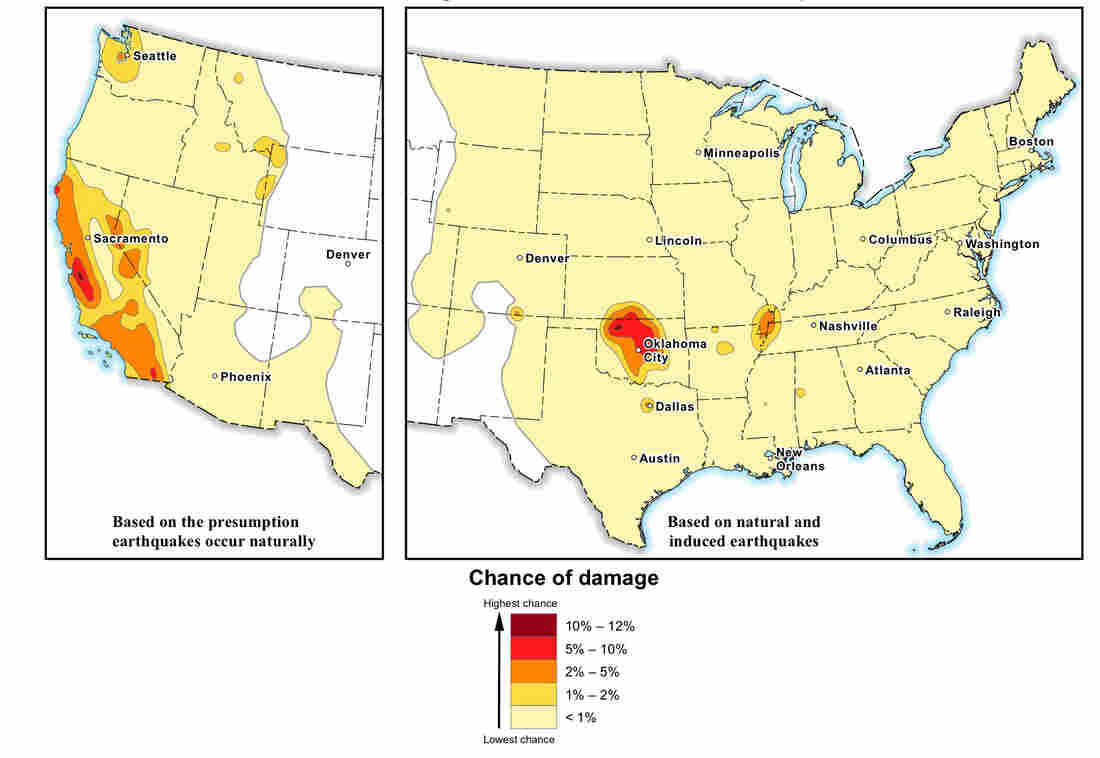 A decade ago, an Oklahoman could count the number of noticeable quakes on her fingers. "In this past year, we had over 900," says USGS seismic hazard expert Mark Petersen. "So the rates have surged."

Petersen says induced quakes have become more frequent because there's more wastewater from oil and gas operations around the country that has to be disposed of. Companies pump it down into underground wells, and sometimes that water raises pressure on underground faults that then slip and cause small quakes.

Industry officials say the percentage of waste wells that pose quake risks is very low. But with the rise in hydraulic fracturing (fracking), which produces a lot of polluted water that needs to be disposed of, the overall number of waste wells around the country has skyrocketed.

The new maps also include the risks of natural quakes around the country, as they have in the past. Those risks haven't changed much. But the number of induced quakes has increased tenfold since 2014, according to the USGS.

Petersen notes that most of these induced quakes are not likely to bring down buildings. Most are in the range of magnitude 3 or 4, which are minor. But some are above magnitude 5, which can do serious damage — cause cracks in your house, for example, or in bridges and roads.

A USGS map shows 21 areas where scientists have observed rapid changes in seismicity that have been associated with wastewater injection. The map also shows earthquakes — both natural and induced — recorded from 1980 to 2015 in the central and eastern U.S. with a magnitude greater than or equal to 2.5. 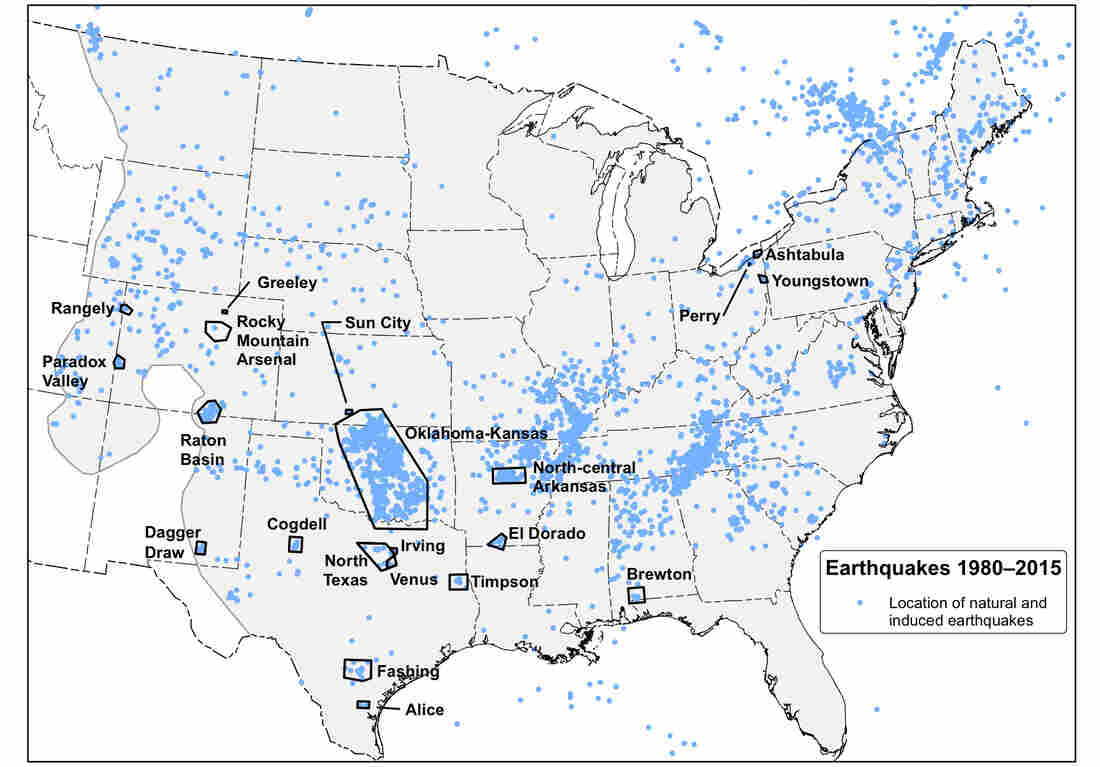 "I think that we need help people understand that they do face a risk in these areas of induced earthquake activity," Petersen says, "and they need to take precautions just like people in California do."

Taking precautions against induced earthquakes — such as strengthening buildings or changing insurance rates — might be tricky, though.

Mark Zoback, a geophysicist at Stanford University who studies induced quakes, says: "It's important to recognize the risk that these maps point out, but that risk is going to change depending on what's happening on the ground." Wastewater wells may not be active for more than a few months or a year; after that, they may no longer pose a risk. Meanwhile, it can take years for a state or community to change building codes to make structures more quake-sturdy.

Moreover, some states have started to ban or limit waste wells in these quake zones. "And in the few places where the injection has stopped," Zoback says, "the earthquakes have stopped."

Zoback adds that the boom in oil and gas exploration in some places is dwindling, which would likely mean fewer waste wells and lower risk. On the other hand, wherever the industry drills new waste wells could become the next quake hot spot.

All this makes it hard to anticipate what the future risk will be. Geologists say they need more information from industry to make good predictions.

Justin Rubinstein of the USGS says many companies do share information about their wells, but it's spotty and varies from state to state. "You can get data [from industry] a year, a year and a half after what was going on, and if you are a regulator interested in understanding what's going on, that means a year or a year and a half lag."

He says geologists want to examine areas where wells might be drilled, to look for faults that might make them vulnerable to quakes, but scientists don't usually know where those future wells will be in time to do the research.

"The USGS doesn't make policy," Petersen says. The best the agency can do, he says, is pinpoint the hazards so policymakers can decide what to do.