Accessibility links
World Cup Qualifying: U.S. Men's Soccer Team — And Its Coach — Get Much-Needed Win : The Two-Way Coach Jürgen Klinsmann's squad beat Guatemala 4-0 to advance to the next round of qualifying matches for the 2018 World Cup. The win also may quell calls for Klinsmann to be fired. 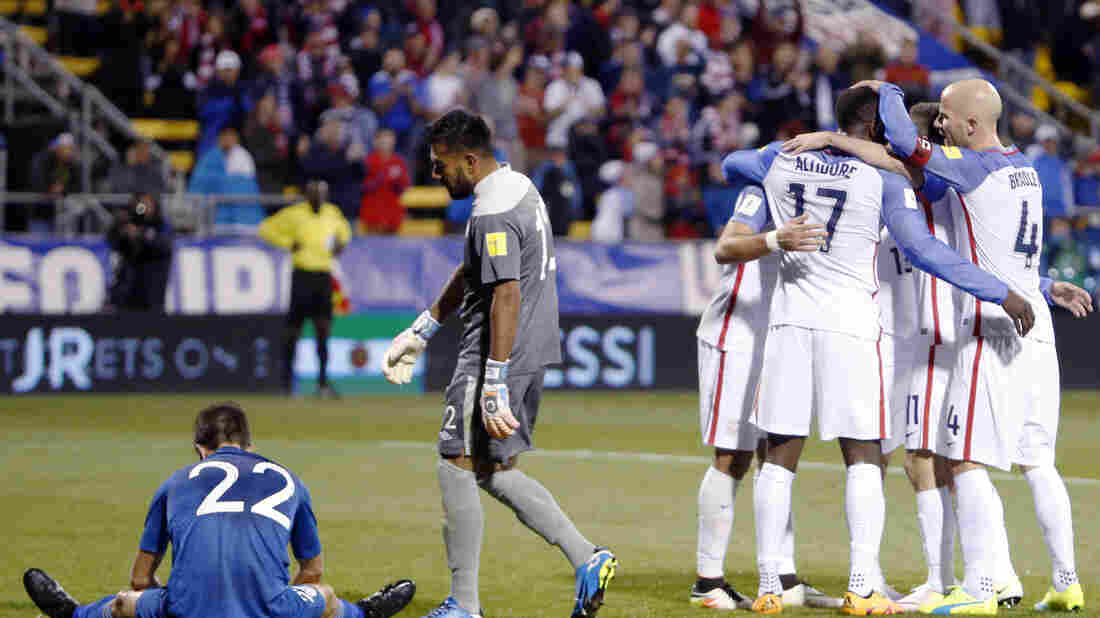 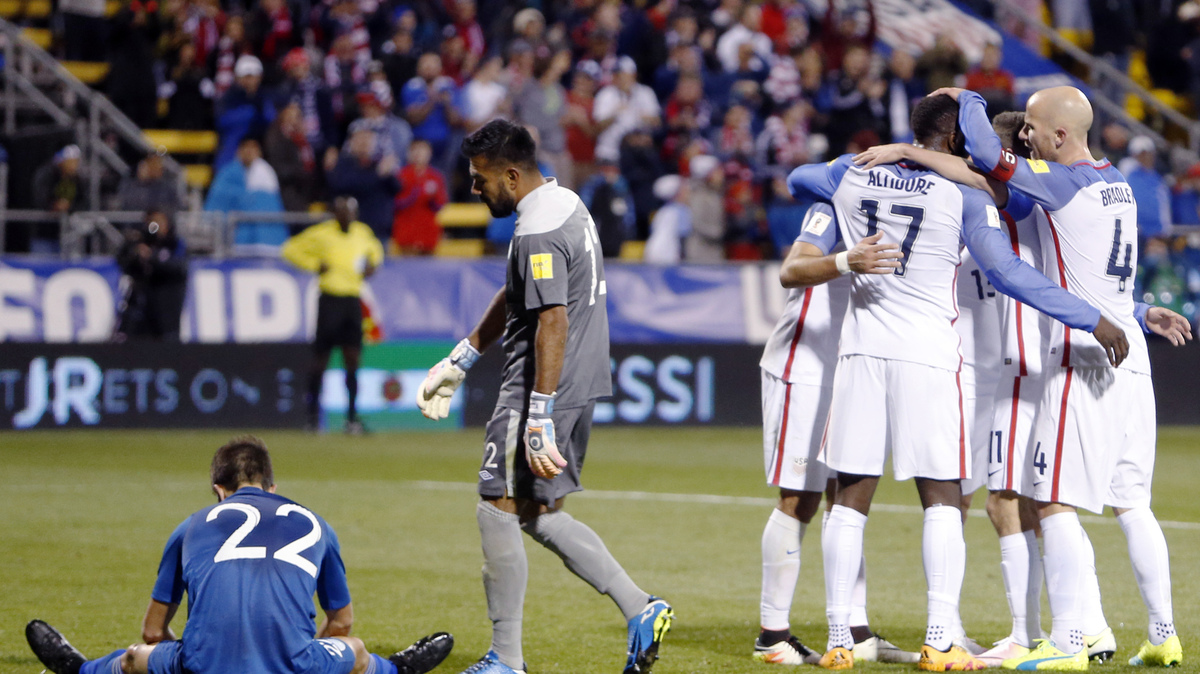 United States players celebrate a goal against Guatemala during the second half of a World Cup qualifying soccer match Tuesday in Columbus, Ohio. The United States beat Guatemala 4-0.

The U.S. men's national soccer team beat Guatemala 4-0 Tuesday night in a crucial World Cup qualifying game in Columbus, Ohio. With the victory, the U.S. will advance to the next round of qualifying for the 2018 World Cup in Russia.

Striker Clint Dempsey scored in the 12th minute to give the U.S. the early lead. Defender Geoff Cameron then managed to get on the end of a free kick from midfielder Michael Bradley to head the second goal home in the 35th minute. 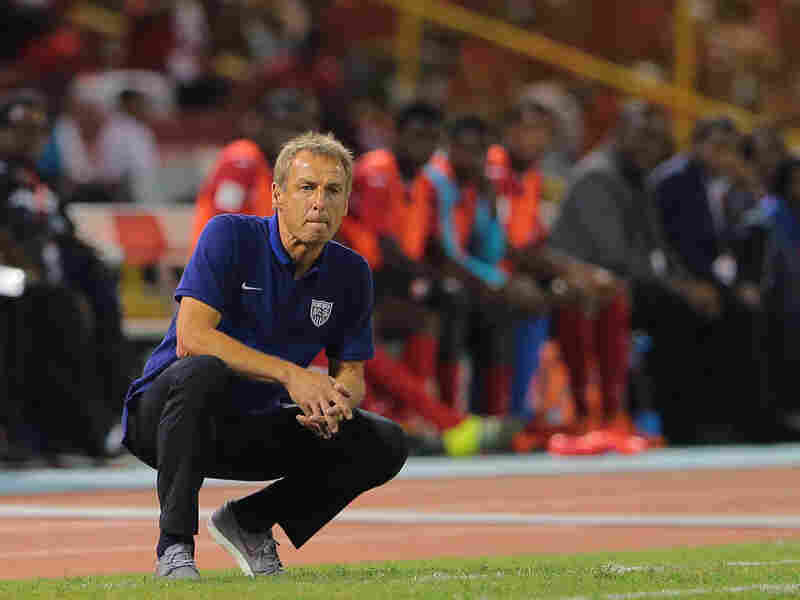 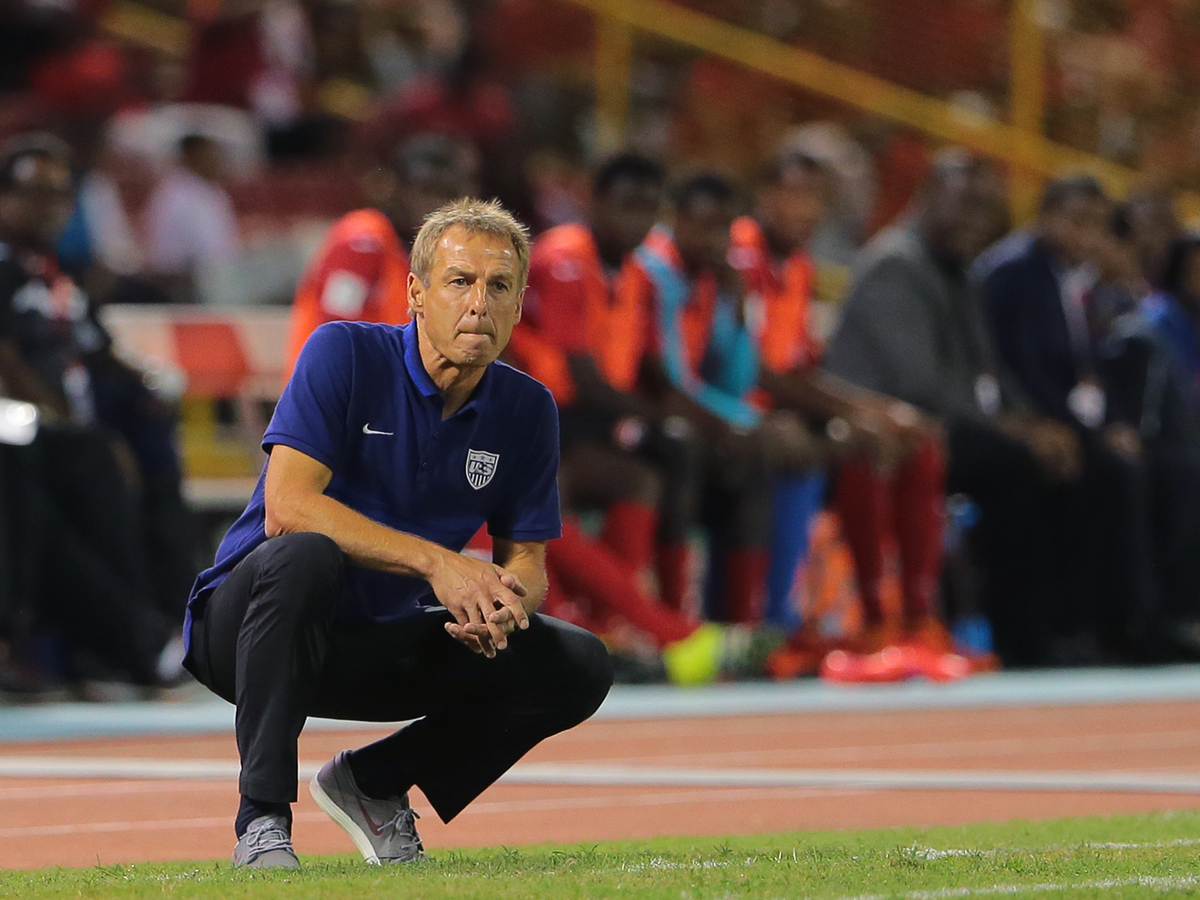 Just after halftime, midfielder Graham Zusi leveled a low shot to the left corner to give the U.S. a comfortable 3-0 lead. But the U.S. wasn't letting up.

In the 85 minute, it looked like the U.S. had scored again when forward Jozy Altidore slid a pass to a streaking Ethan Finlay who hammered it home, but the play was called offside — a dubious call upon examination of the replay.

Altidore made up for it, burying a shot in the top left corner just before the final whistle.

Overall, the U.S. played like a completely different team than the one that was trounced 2-0 in by Guatemala in Guatemala City on Friday, in a performance that soccer commentator Craig Burley called "an utter shambles."

Friday's loss was the first time that the United States had lost to Guatemala in 21 games, and the latest in a number of disappointments for the U.S. while playing teams such as Jamaica, Brazil, Mexico and Costa Rica. A loss Tuesday would've all but kept the U.S. out of the World Cup for the first time since 1986.

Much of the blame for the team's spotty performance has been laid at the feet of coach Jürgen Klinsmann, one of the most famous names in international soccer. He was part of the German team that won the World Cup in 1990, and played for some of the world's top teams — including Inter Milan, Tottenham Hotspur and Bayern Munich. As a manager, he coached the German national team to a third-place finish in the 2006 World Cup.

So it seemed like quite a coup when U.S. Soccer Federation signed Klinsmann to coach the men's national team in July 2011. Although the U.S. made it to the Round of 16 in the World Cup in Brazil two years ago, his tenure has been controversial. Klinsmann has many defenders, but even some of those, such as SB Nation's Bill Connelly, admit the overall record has been mixed.

Commentators like Graham Parker blame frequent changes in lineup and strategy. "The team feels as if it exists in a permanently provisional state," he wrote in The Guardian on Saturday, and a number of others agree with the sentiment in this LA Times headline today: "Another loss to Guatemala could spell the end for U.S. soccer coach Jürgen Klinsmann"

In fact, before Tuesday night's game, a banner flew over the stadium calling for Klinsmann to be fired. According to ESPN, the banner read "#FIREKLINSMANN HE'S A TINY LITTLE BIT BEHIND," a mocking reference to Klinsmann's explanation for why he left some players, like former U.S.-team captain Landon Donovan, off the 2014 World Cup roster.

The decisive win for the U.S. may give Klinsmann some breathing room for the final round of regional qualifying, which will begin in November.

A previous version of this post said Jürgen Klinsmann once played for AC Milan. He was with Inter Milan.