Accessibility links
Brazil's President In Further Danger Of Being Ousted : The Two-Way The biggest party in Dilma Rousseff's coalition has pulled out, severely wounding her government. She is accused of manipulating federal accounts to mask the real state of the country's economy. 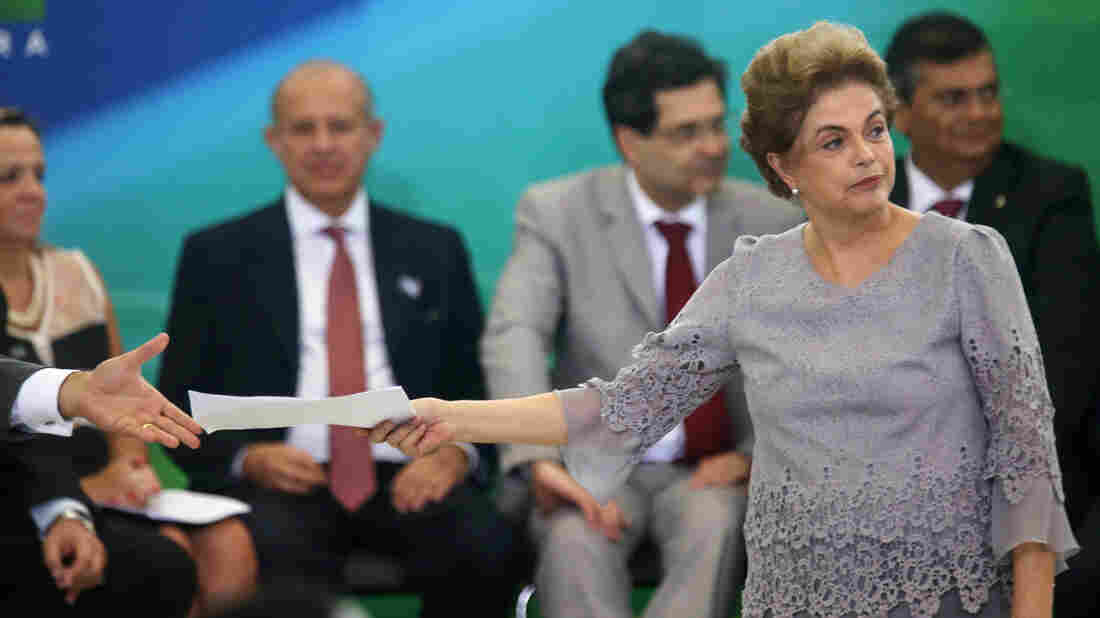 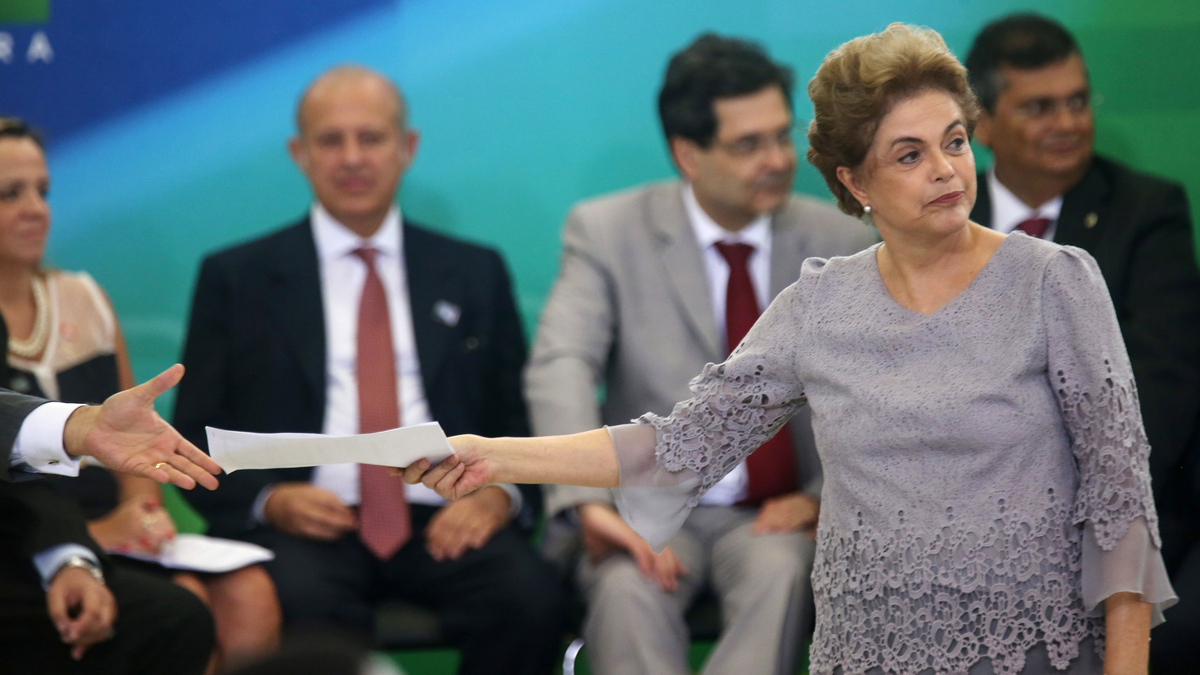 Brazilian President Dilma Rousseff, who is facing possible impeachment, meets with some of her supporters last week in Brasilia.

The biggest party in Brazilian President Dilma Rousseff's coalition has pulled out, severely wounding her government and pushing her one step closer to removal. The Brazilian Democratic Movement Party, or PMDB, held a short three-minute meeting that was broadcast live on television. After the vote was taken, legislators began singing the national anthem and shouted "PT out" — Rousseff is from the PT or Worker's Party.

Reaction to the news was swift in a politically polarized country where huge demonstrations both against and for the government have taken place in recent weeks.

According to Agence France-Presse:

"Senator Aecio Neves, who heads the PSDB opposition party and who narrowly lost to Rousseff when she won re-election in 2014, commented: 'Dilma's government is finished.'

The party is forcing its members to give up the six ministries they head or face disciplinary action. Additionally, 600 federal employees will also have to leave office. In the short term, that means even more governmental instability as Rousseff scrambles to fill the vacancies in key ministries like Health and Agriculture.

But analysts say the real significance of the departure is that it increases the likelihood that Rousseff will indeed be impeached. The PMDB has 69 seats in the lower house of Congress, the body which will vote on impeachment proceedings next month.

Rousseff so far has not been implicated in a massive corruption scandal roiling the political establishment that resulted from graft at the state oil company, though many of those who are deciding whether she will be ousted have been. Instead, the case for impeaching her stems from accusations that she fiddled with federal accounts to mask the real state of the economy, which shrank 3.8 percent last year.

Her approval rating is in the single digits, and a recent poll showed that 60 percent of the country is in favor of her ouster.

Rousseff argues that the move against her is a right wing "coup" and has vowed to fight to the end.

After Tuesday, that became much more difficult.

There is expected to be a vote in the lower house of Congress on April 17. Two-thirds of that chamber (320 members) must vote in favor of impeachment for it to go forward. Then the vote goes to the Senate, where a simple majority is enough for the motion to pass. At that point, she would step down for 180 days while the Supreme Court investigates the charges against her.

Her vice president, who is from the party that just broke with her government, would assume office in the interim. News reports say he is already assembling his own Cabinet.