Accessibility links
U.S. Women's Soccer Team Members File Federal Equal-Pay Complaint : The Two-Way "I think that we've proven our worth over the years," Carli Lloyd says of the team that's been ranked No. 1 in the world since last July. 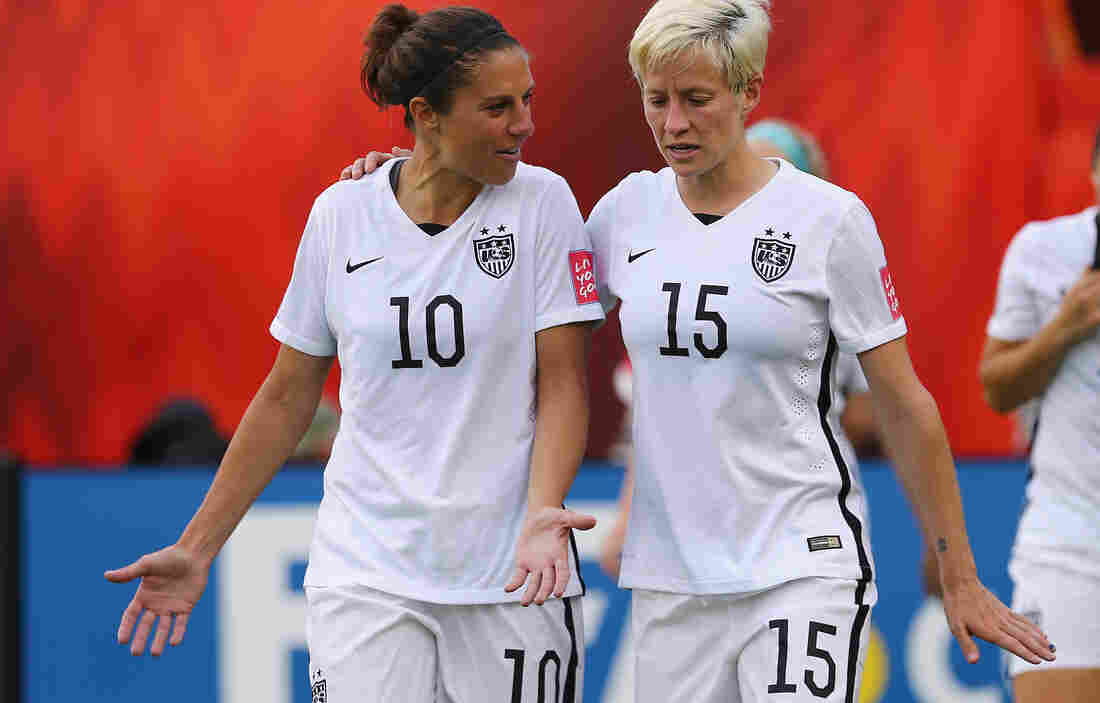 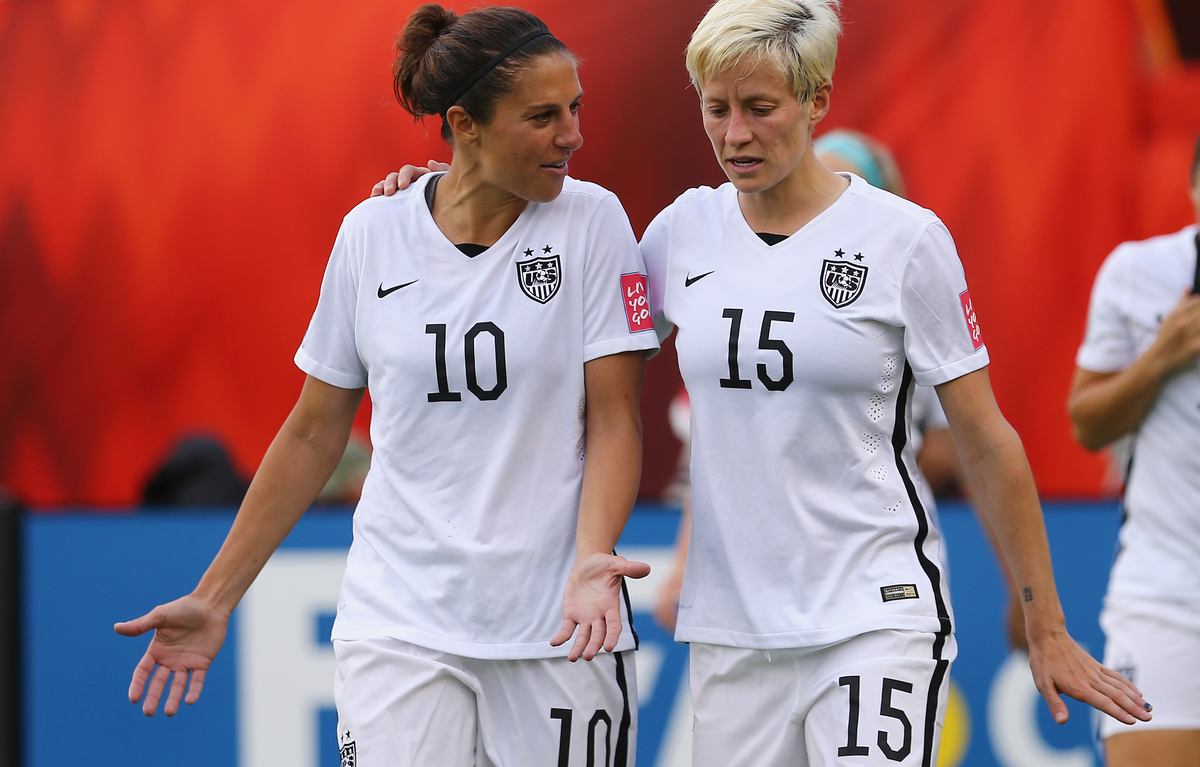 Carli Lloyd (left) and Megan Rapinoe are two of the five star players who filed a wage complaint against U.S. Soccer. The players say that the whole team supports their case, which accuses the national federation of paying male players far more money.

"I think that we've proven our worth over the years," Carli Lloyd, the 2015 FIFA women's player of the year, said in an interview on NBC's Today show. "Just coming off of a World Cup win, the pay disparity between the men and women is just too large."

The complaint was filed by five high-profile players — Lloyd, Hope Solo, Alex Morgan, Megan Rapinoe and Becky Sauerbrunn — who say that each member of the women's national team is paid thousands of dollars less than the men at nearly every level of competition, from playing "friendly" matches to qualifying and playing in the World Cup.

While a handful of players signed the complaint, Sauerbrunn said today that "the decision to file was wholeheartedly supported by the entire team."

Five players signed the complaint, but the decision to file was whole-heartedly supported by the entire team. #equalplayequalpay #thegals

The players are represented by Jeffrey Kessler, a prominent attorney who has deep experience in tangling with sports leagues, particularly the NFL. He represented Tom Brady during the "Deflategate" inquiry and has worked on complex sports and antitrust cases that include McNeil v. National Football League, a landmark 1992 case that ushered in the era of unrestricted free agency in pro football.

"We believe we have a very strong case of blatant gender discrimination and that the EEOC will agree," Kessler said via email Thursday.

The players' complaint notes that the women won their most recent World Cup title in a final that "captured the hearts of approximately 23 million viewers, making it the most watched soccer game in American TV history."

As we noted after that game last July, those ratings were "comparable to the 2014 World Series' Game 7, which attracted 23.5 million viewers."

The EEOC filing says that the women's achievements and revenue generation "have not resulted in us or our fellow players earning equal or better pay than MNT players" — and that U.S. Soccer is breaking federal law by not offering equal compensation.

In a statement responding to news of the complaint Thursday, the U.S. Soccer Federation says it is "committed to and engaged in negotiating a new collective bargaining agreement that addresses compensation with the Women's National Team Players Association."

"After three unsuccessful attempts by private entities to maintain a women's professional league, U.S. Soccer committed to investing in and administering the National Women's Soccer League to ensure our women's players would have an ongoing professional environment in which to continue their careers. As part of this, Women's National Team players are paid full-time salaries and other compensation."

As ESPN reports about the players' complaint, "The filing, citing figures from the USSF's 2015 financial report, says that despite the women's team generating nearly $20 million more revenue last year than the U.S. men's team, the women are paid almost four times less."

Citing U.S. Soccer's annual financial reports, the complaint says that the group's initial budget had projected a financial loss for both the men's and women's teams — but that the women's national team's success "almost exclusively" brought a projected $17.7 million profit. For the 2017 financial year, the players say, the federation now "projects a net profit from the WNT of approximately $5 million, while projecting a net loss of nearly $1 million for the MNT."

Both the women's and men's teams are required to play a minimum of 20 "friendly" games per year, the players say in their complaint. But while the women get a bonus of $1,350 only if they win a friendly, the men are guaranteed $5,000 no matter the outcome – and can make up to $17,625 per game depending on their opponent's FIFA ranking.

On the Today show, Solo said she hasn't seen much change, after spending more than a decade on the team that has repeatedly won international accolades and is undefeated this year.

A look at U.S. Soccer's 990 IRS filing for the 2014 financial year shows that its highest-paid employees included five members of the men's national team. Four of those players made around $400,000, while Clint Dempsey made $428,000.

Of that money, large chunks were earned via bonuses and incentives – the base pay for Dempsey, for instance, was listed as $46,000. The only woman to rank among the 12 names of top earners on the filing was Lisa Levine, the organization's general counsel.

According to U.S. Soccer's annual financial statement that was released late in 2015, the federation had $83 million in total net assets — up $10 million from the previous year. It reported $37 million in revenue from sponsorship, TV and licensing, along with $34 million from its national teams' game revenues.

The EEOC complaint is the latest in what has become a publicly strained relationship between U.S. Soccer and members of the women's team. Last month, the federation filed a federal lawsuit against the women's national team players union, with U.S. Soccer asking a court to determine whether a memorandum of understanding should remain in effect until the end of this year — something the union has argued against.

When the women's collective bargaining agreement expired on Dec. 31, 2012, the players union and U.S. Soccer signed a memorandum of understanding to continue operations. The CBA that covers the men's national team expires at the end of 2018.

The discord comes months ahead of the Summer Olympics in Brazil, where the women's team will vie for its fourth consecutive gold medal.

As the complaint states, both male and female American soccer players get a $15,000 individual bonus for qualifying for the Olympic team — and another $15,000 for making the roster. But it also notes that U.S. Soccer has different per diem rates to cover athletes' costs, with men receiving $75 a day for international venues while the women get $60.