Accessibility links
Here's Why Mississippi's 'Religious Freedom' Bill Is So Controversial : The Two-Way The bill, approved by state lawmakers this week, protects those who deny services to others based on three specific moral beliefs: objections to same-sex marriage, extramarital sex and trans people. 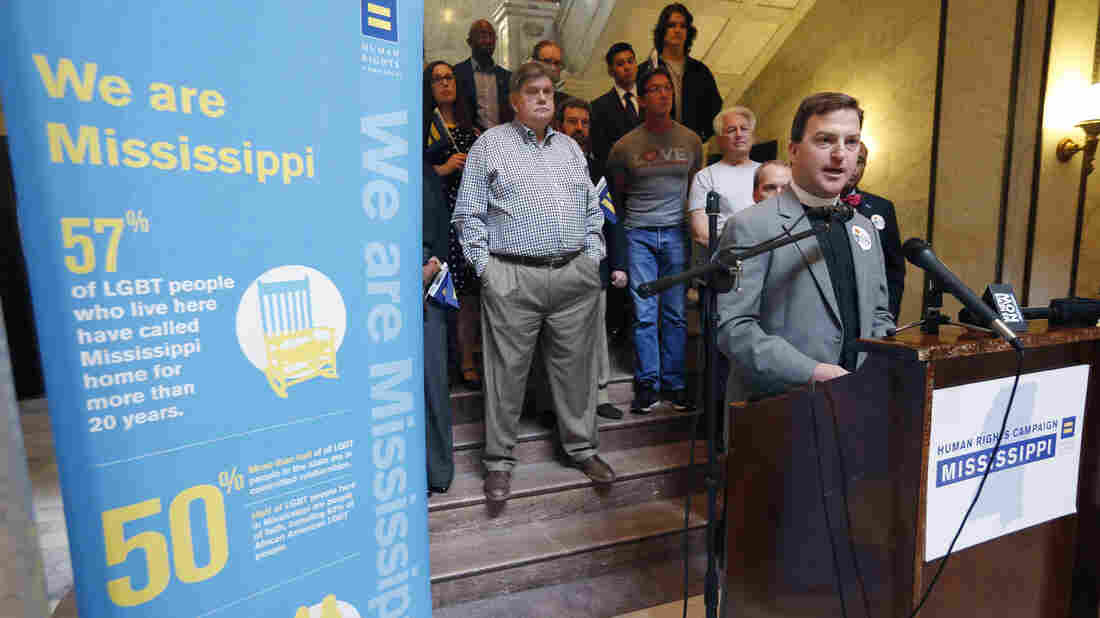 The Rev. Chris Donald, a Methodist chaplain at Millsaps College, joins other human rights advocates Wednesday at the state Capitol's rotunda, calling for the Mississippi Senate to defeat what they believe is a discriminatory anti-LGBT bill. The Senate passed the bill, which is now on the governor's desk. Rogelio V. Solis/AP hide caption 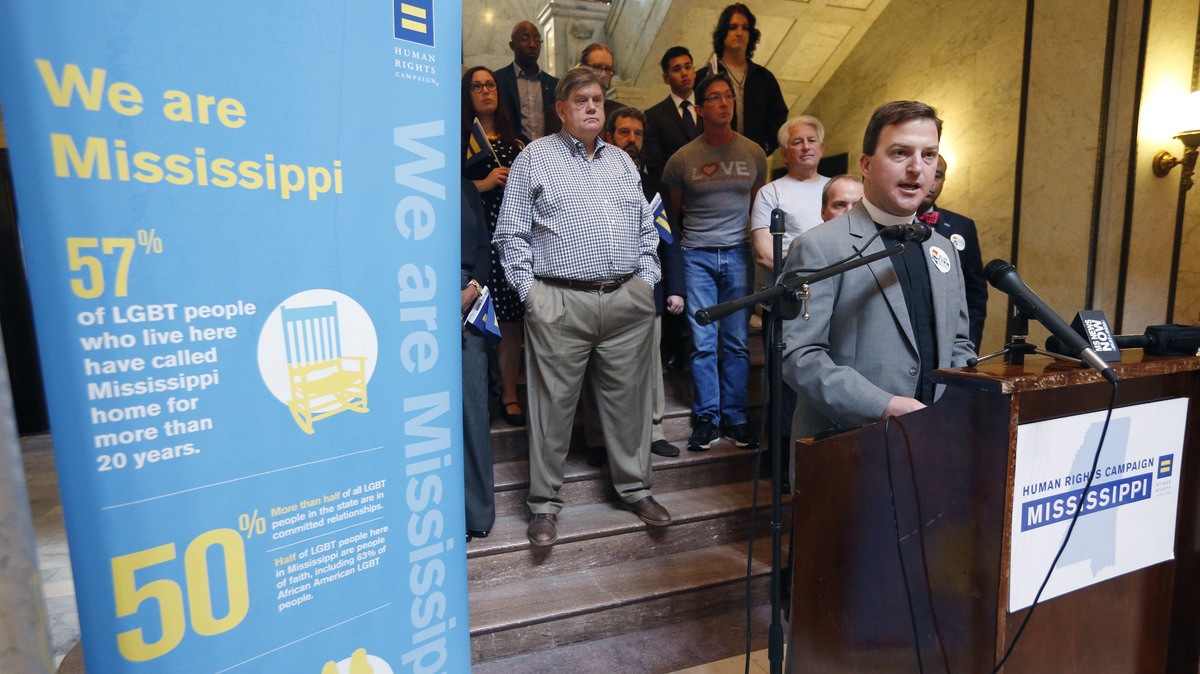 The Rev. Chris Donald, a Methodist chaplain at Millsaps College, joins other human rights advocates Wednesday at the state Capitol's rotunda, calling for the Mississippi Senate to defeat what they believe is a discriminatory anti-LGBT bill. The Senate passed the bill, which is now on the governor's desk.

The legislation, now sitting on the governor's desk, allows state employees to refuse to issue same-sex-marriage licenses and protects private companies and religious groups from being punished for denying a range of services to LGBT people.

And it's clearly focused on the treatment of LGBT people — not on religious freedom writ large.

State religious freedom bills have made the news frequently in recent years, from the controversial passage of an Indiana law last year to one that Georgia's Republican governor refused to sign last month.

Those laws often defined religious belief quite broadly. Supporters of such bills could argue — as Douglas Laycock of the University of Virginia did last year, talking to NPR's Jennifer Ludden — that religious freedom laws have a range of applications.

Not so Mississippi's bill. Here's Section 2, in its entirety:

The bill then defines all the actions that a Mississippi resident could take — with one of those moral convictions as a reason — with the guarantee that the state government won't punish him or retaliate against him.

For religious organizations, protected actions include refusing to conduct a marriage, firing or disciplining employees, declining to provide adoption or foster care services and refusing to rent or provide housing.

For individuals and private companies, they include "guiding, instructing or raising" a foster child in accordance with those three beliefs; refusing to give counseling, fertility services or transition-related medical care; declining to provide wedding-related business services; and establishing sex-specific dress codes and having sex-segregated restrooms and other facilities.

And the bill allows state employees to refuse to license or perform marriages to which they morally object.

Any state punishment or retaliation for such actions, like a person losing a job, a license or a state grant, is deemed "discrimination" under the bill, with compensation to be available for those so affected.

The law doesn't mention the right of a private company or person to fire employees or refuse to rent housing. But in Mississippi, as in 27 other states, it's already legal to fire people or refuse to lease them property because of their sexuality.

Both proponents and opponents of the bill have focused on the impact it would have when LGBT Mississippians seek to marry, raise children or receive medical and psychological services. Supporters say the law protects the religious freedoms of those opposed to homosexuality; opponents say the law amounts to a state sanction of discrimination against LGBT people.

Some groups have also noted that because an opposition to extramarital sex is also a protected belief, the proposed Mississippi bill could also impact unmarried couples and single mothers.

But, again, it's worth noting that in Mississippi, as in 27 other states, it's already legal to deny housing to an unmarried couple based on a landlord's objection to premarital sex. Mississippi even has a rarely enforced law on the books criminalizing cohabitation.

Paul Boger of Mississippi Public Broadcasting reported Thursday on the state Senate debate over the bill. The vote broke down along party lines, Boger reports, with Republicans in favor and Democrats vocally dissenting:

"Freshman Sen. Jennifer Branning, a Republican from Philadelphia [Miss.], presented the bill. She said it only has one goal: 'This bill in no way allows for discrimination by one person against another. What it does is it prohibits your government from discriminating against you with regard to your religious beliefs. That's the bottom line.'

"In all, debate lasted a little more than three hours, with many Democrats arguing the bill was discriminatory against the LGBT community in Mississippi. Many drew distinct parallels between this bill and Jim Crow laws. Sen. John Horne of Jackson says Mississippi's history does not need to repeat itself. ... 'We don't need to put another stain on Mississippi.' "

The state House and Senate passed the bill earlier this week, and on Friday morning, the House approved the final version. It's now headed to Republican Gov. Phil Bryant, for signature or veto.

A previous version of this post incorrectly referred to a Mississippi state senator named Jennifer Browning. In fact, the senator's name is Jenifer Branning. When we corrected her last name on April 4, we didn't realize her first name was also misspelled.