Accessibility links
What Are The Panama Papers: Here's What You Need To Know (So Far) : The Two-Way Who leaked the papers? Are the schemes uncovered illegal? We answer some pressing questions about the huge document leak. 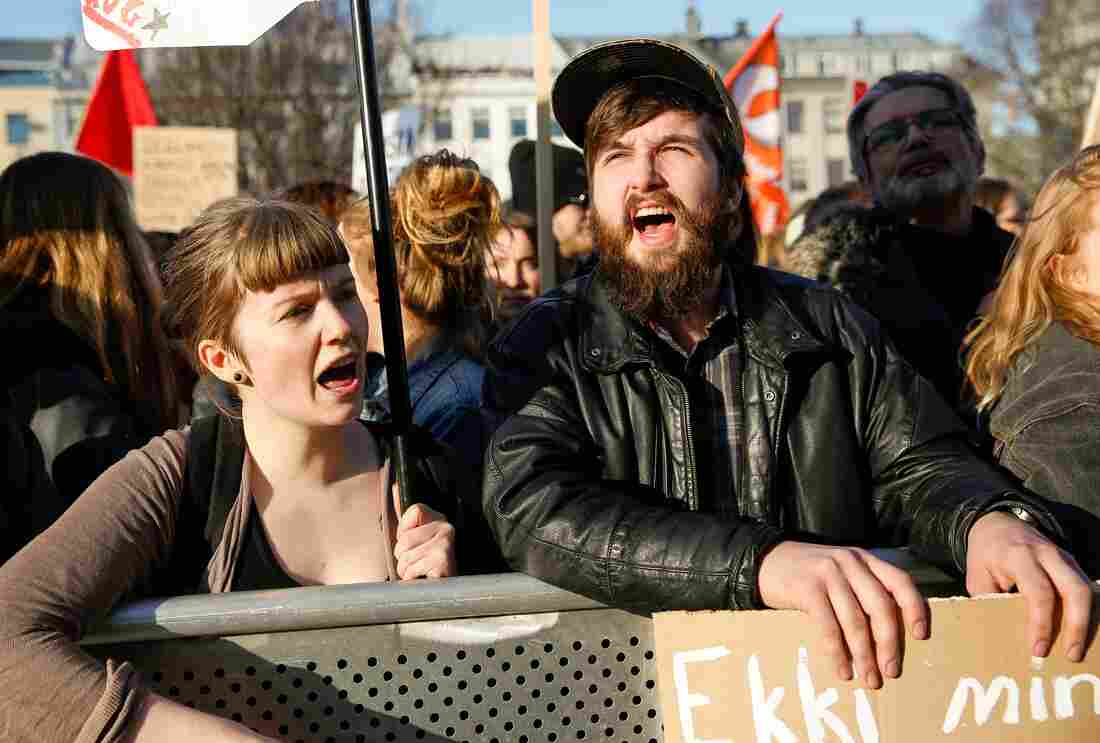 People in Reykjavik gather Monday to demonstrate against Sigmundur David Gunnlaugsson, Iceland's prime minister. Gunnlaugsson insisted he would not resign after leaked documents allegedly linked him to an offshore company that could represent a serious conflict of interest. Brynjar Gunnarsson/AP hide caption 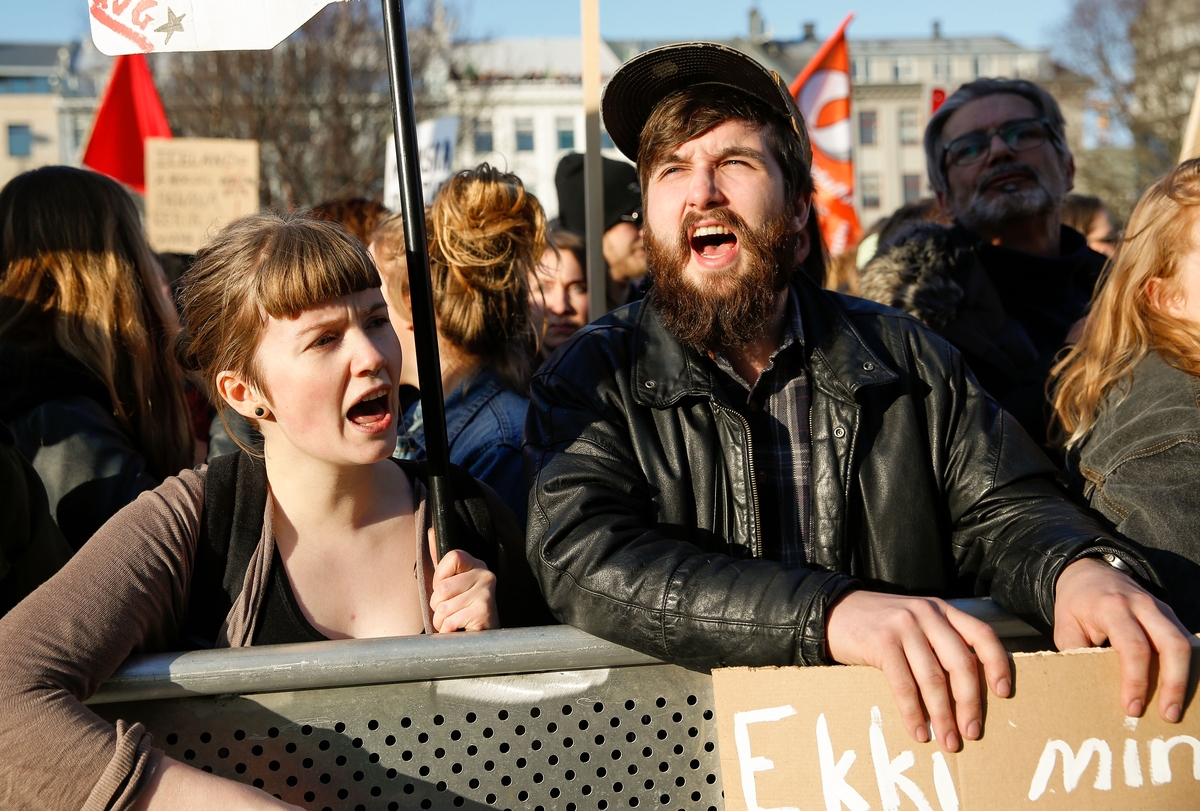 People in Reykjavik gather Monday to demonstrate against Sigmundur David Gunnlaugsson, Iceland's prime minister. Gunnlaugsson insisted he would not resign after leaked documents allegedly linked him to an offshore company that could represent a serious conflict of interest.

Over the past year, investigative journalists across the world have been sifting through 11.5 million internal files from the Panamanian law firm Mossack Fonseca.

The files were leaked to the German paper Süddeutsche Zeitung, which shared the huge trove with the International Consortium of Investigative Journalists. Stories about the data, which have been dubbed the Panama Papers, have been published by news organizations everywhere from Argentina to Sweden.

We know a lot about the trove of documents, but there's also a lot we don't know. (The ICIJ promises to release a full list of companies and the people linked to them in "early May.")

Here we try to answer some basic questions about the story.

-- Who leaked the documents?

We don't know. Süddeutsche Zeitung says only that it was contacted by an "anonymous source" over a year ago.

"... emails, contracts, transcriptions and scanned documents. In total, the leak contains: 4.8 million emails, three million database entries, two million PDFs, one million images and 320,000 text documents. The dataset is bigger than any from Wikileaks, or the Edward Snowden disclosures."

Ramon Fonseca, the director of Mossack Fonseca, told Reuters that the firm had suffered "a successful but 'limited' hack."

-- What do the documents reveal?

According to ICIJ, the documents make public the offshore accounts of 140 politicians and public officials. The documents don't necessarily detail anything illegal, but they do shine a light on the shadowy world of offshore finances.

Back in 2012, our friends at Planet Money set up their own shell company. Doing so, they explained why some people might want to legitimately hide some aspects of their business. But, as Adam Davidson put it at the time, it's hard to imagine that people going through such great lengths to obfuscate parts of their business want to do it for entirely legitimate reasons.

The allegations in many of the Panama Papers stories is that the individuals implicated were allegedly laundering money or hiding some connections that would be detrimental.

-- What does the law firm Mossack Fonseca have to say about all this?

Basically that it has done nothing wrong. The firm sent a nine-page response to ICIJ saying that "we have not once in nearly 40 years of operation been charged with criminal wrongdoing."

Indeed, as The New York Times explains, it is "not illegal in many cases to have offshore bank accounts. But they are used in some instances by wealthy individuals and criminals to hide money and business transactions, and to avoid paying taxes."

-- What about the big names I've seen in headlines? Are they in trouble?

Maybe, but a lot of what these documents reveal is circumstantial. For example, Vladimir Putin was not directly linked to any of these secret accounts. Instead, the documents reveal that close associates of the Russian leader funneled as much as $2 billion through offshore accounts.

The Cellist Who Allegedly Helped Russians Move Billions Of Dollars

In one case, an offshore entity was given about $1 billion by a state-controlled Russian bank. That same entity, for example, also lent the owners of a ski resort about $11 million in 2010-11. According to The Guardian, Putin is a reputed guest of the resort and his daughter Katya got married at the resort in 2013.

Perhaps the most clear-cut case revealed so far comes from Iceland, where the documents show that country's prime minister, Sigmundur David Gunnlaugsson, and his wife had a stake in a company seeking millions of dollars from failed Icelandic banks.

The Iceland Monitor reports that thousands took to the streets, and the alleged conflict of interest could bring the government "crashing down."

-- What effect will this have on the offshore world?

It depends on whom you ask. Nigel Green, of the financial consultancy deVere Group, minimizes what the leak tells us. According to deVere, mechanisms are already in place around the world to make it "almost impossible to hide money."

At Time, Rana Foroohar, who writes about the economy, says the revelations could lead to a "great crisis" for capitalism.

"To me, this is one of the key issues at work in the U.S. presidential election. Voters know at a gut level that our system of global capitalism is working mainly for the 1 %, not the 99 %. That's a large part of why both [Bernie] Sanders and [Donald] Trump have done well, because they tap into that truth, albeit in different ways. The Panama Papers illuminate a key aspect of why the system isn't working–because globalization has allowed the capital and assets of the 1 % (be they individuals or corporations) to travel freely, while those of the 99 % cannot. Globalization is supposed to be about the free movement of people, goods, and capital. But in fact, the system is set up to enable that mobility mainly for the rich (or for large corporations). The result is global tax evasion, the offshoring of labor, and an elite that flies 35,000 feet over the problems of nation states and the tax payers within them."

-- Is there one story I should read about this?

To understand the issue, listen to the Planet Money piece we embedded above. To understand how all of this can affect an entire city, read the Miami Herald's piece based on the papers.

The Herald reports that shadowy corporations may be propping up the condo market in the city. It may not be all dirty money flowing through South Florida, but these documents connect some politicians in Brazil who are under investigation for corruption to some superfancy condos in Miami.

The bottom line, the paper reports: "Money from people linked to wrongdoing abroad is helping to power the gleaming condo towers rising on South Florida's waterfront and pushing home prices far beyond what most locals can afford."