Accessibility links
Princeton Will Keep Woodrow Wilson's Name On School Buildings : The Two-Way Some students had wanted the former U.S. president's name removed because of Wilson's views on segregation. 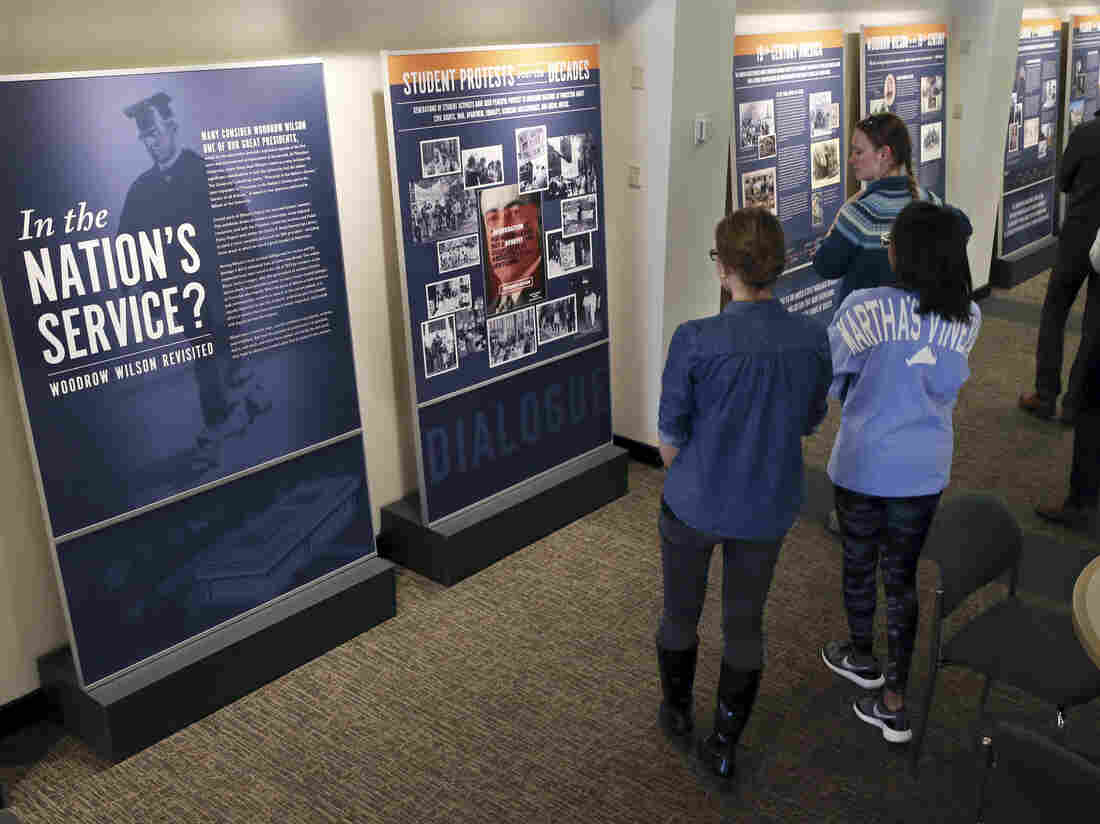 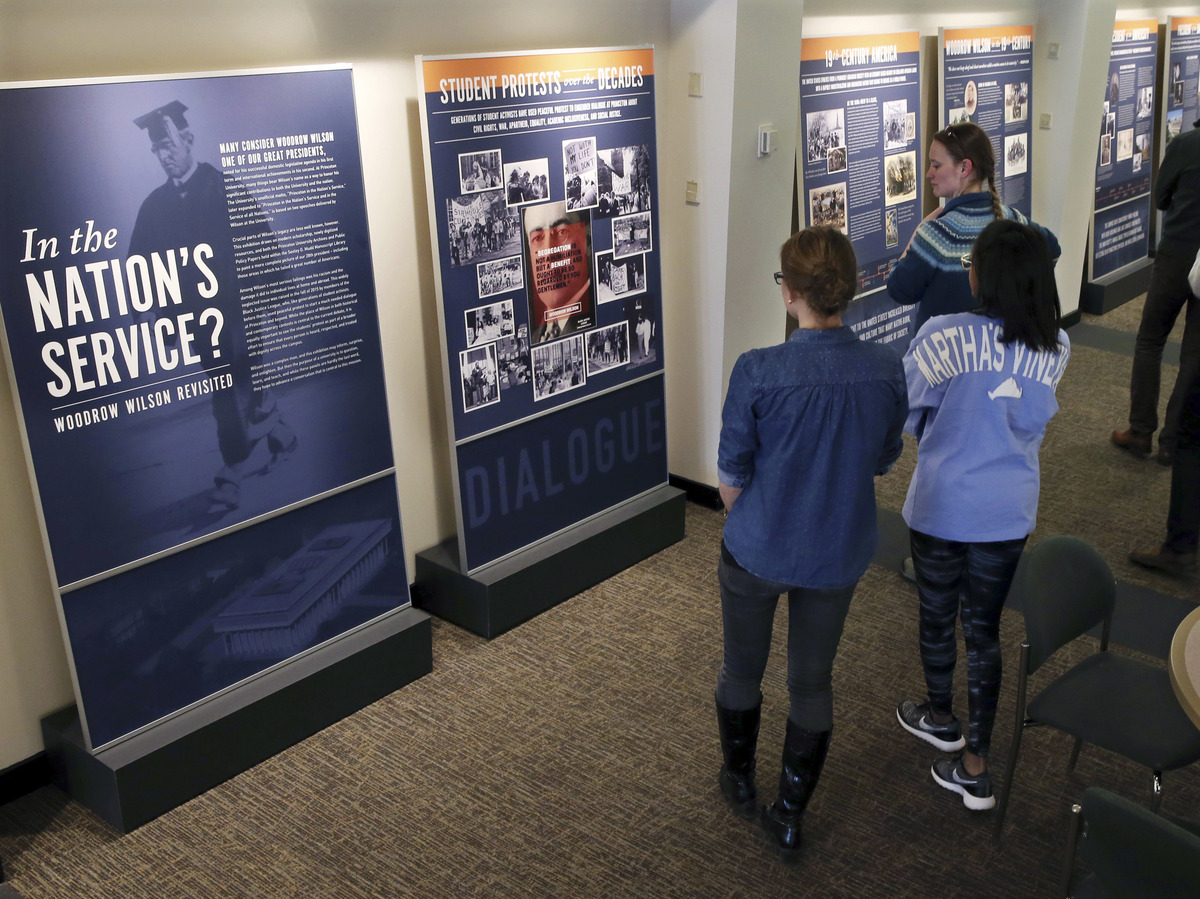 Princeton University students walk through an exhibit titled "In the Nation's Service? Woodrow Wilson Revisited," at the Woodrow Wilson School of Public and International Affairs in Princeton, N.J.

Princeton University's board of trustees has decided that it will not remove Woodrow Wilson's name from its School of Public and International Affairs and from a residential college, despite student protests over the former president's segregationist views.

At the same time, the trustee committee weighing the issue said the university "needs to be honest and forthcoming about its history." It adds: "This requires transparency in recognizing Wilson's failings and shortcomings as well as the visions and achievements that led to the naming of the school and the college in the first place."

As we reported last year, Princeton agreed to consider removing Wilson's name from campus institutions after students mounted a 32-hour sit-in outside the university president's office. 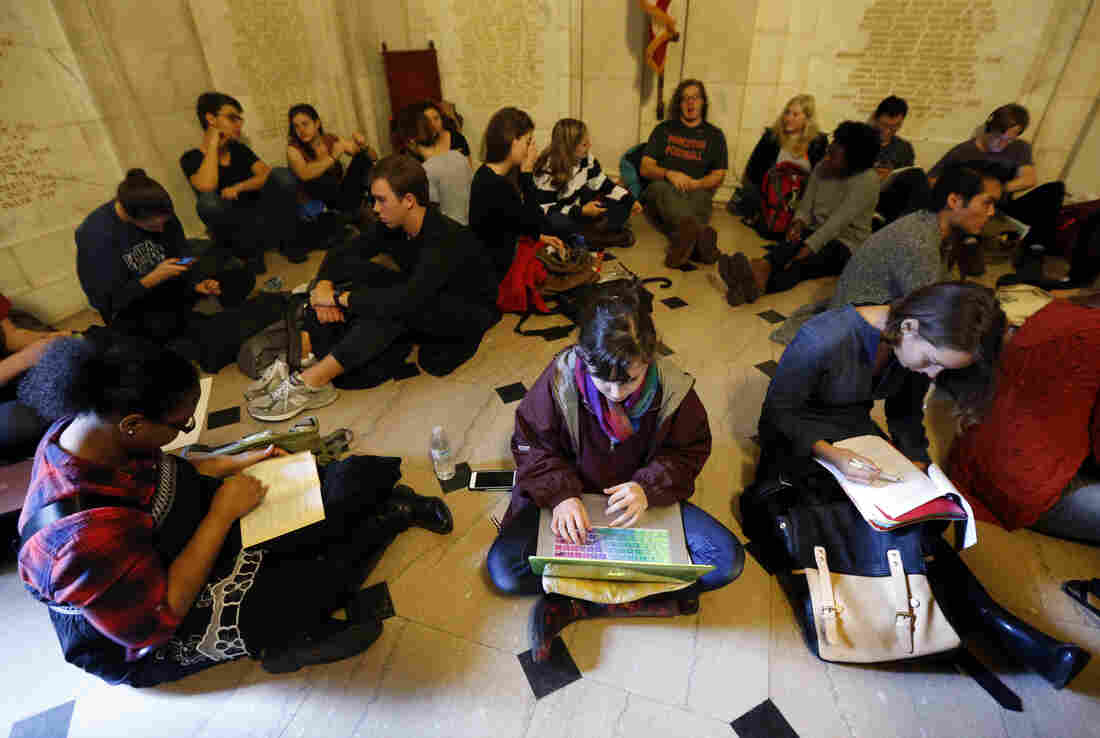 Students gather inside Nassau Hall during a sit-in in November 2015, in Princeton, N.J. The protesters from a group called the Black Justice League were demanding that the school remove the name of former school president and U.S. President Woodrow Wilson. Julio Cortez/AP hide caption

NPR's Joel Rose tells our Newscast unit that "before Woodrow Wilson was president of the United States, and won a Nobel Peace Prize for his work on the League of Nations, he was the president of Princeton."

During that time, Wilson "transformed an intellectually lethargic campus into a renowned institution of higher learning," the committee report says.

Wilson also was an avowed segregationist. He once said that "the whole temper and tradition of the place are such that no negro has ever applied for admission," according to the committee report. It added that when a black student in 1909 asked about applying, Wilson said "that it is altogether inadvisable for a colored man to enter Princeton."

Although the board of trustees decided not to remove Wilson's name from the institutions, it "called for an expanded and more vigorous commitment to diversity and inclusion at Princeton." That includes introducing a new program aimed to bring more minority students into the university's doctoral programs and diversifying campus art.

University of Richmond history professor Eric Yellin, who wrote a biography of Wilson and was on the Princeton committee, tells The Associated Press that "It's really important not to take Wilson's racism and put it in the category of 'everybody was a racist.' "

Yellin told the news service: "Not everybody was president, or as articulate about why segregation was important. Not everybody had the same number of opportunities to change the world."

"The main reason I support keeping it there is not about Woodrow Wilson. It's about the almost hundred years of history since Woodrow Wilson that people didn't have a problem with it. And what that says to me is that America is becoming more racially sensitive, and that's a good thing. The negative formulation of that is nobody thought about this for a hundred years. What does that tell you about America?"

A new exhibition at Princeton explores Wilson's complicated legacy. Elizabeth Donahue, associate dean of public affairs and communications of the Wilson School, discussed the display in an interview with The Daily Princetonian:

"One of the things we heard from protesting students was that it is not just a problem that Wilson was flawed, but it is a problem that he is so venerated across this campus. So the title of the exhibit — In the Nation's Service? Woodrow Wilson Revisited — tries to get at the heart of the [Black Justice League]'s protest about how Wilson is honored at Princeton."

You can browse a digital version of the exhibition here.