Accessibility links
Bible Could Become An Official State Symbol, As Tennessee Approves Bill : The Two-Way It's degrading to the religious book to put it on the same level as the state flower and bird, says a Republican critic of the bill. 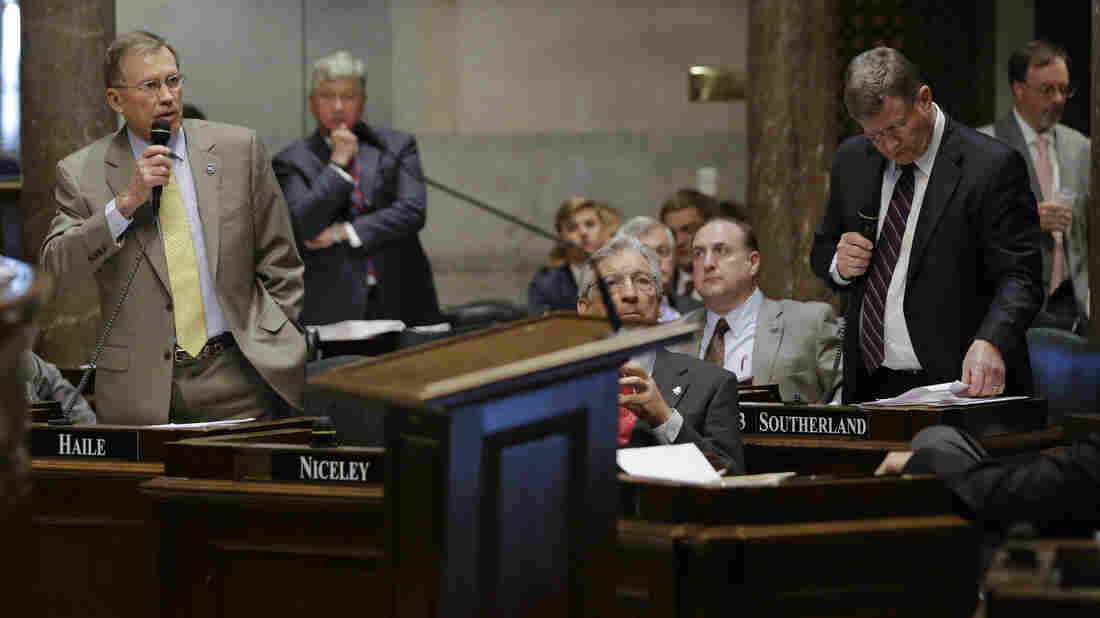 State Sen. Ferrell Haile, R-Gallatin (left), speaks during debate on a bill that would make the Bible the state book of Tennessee. At front right is Sen. Steve Southerland, R-Morristown, who sponsored the bill. Mark Humphrey/AP hide caption 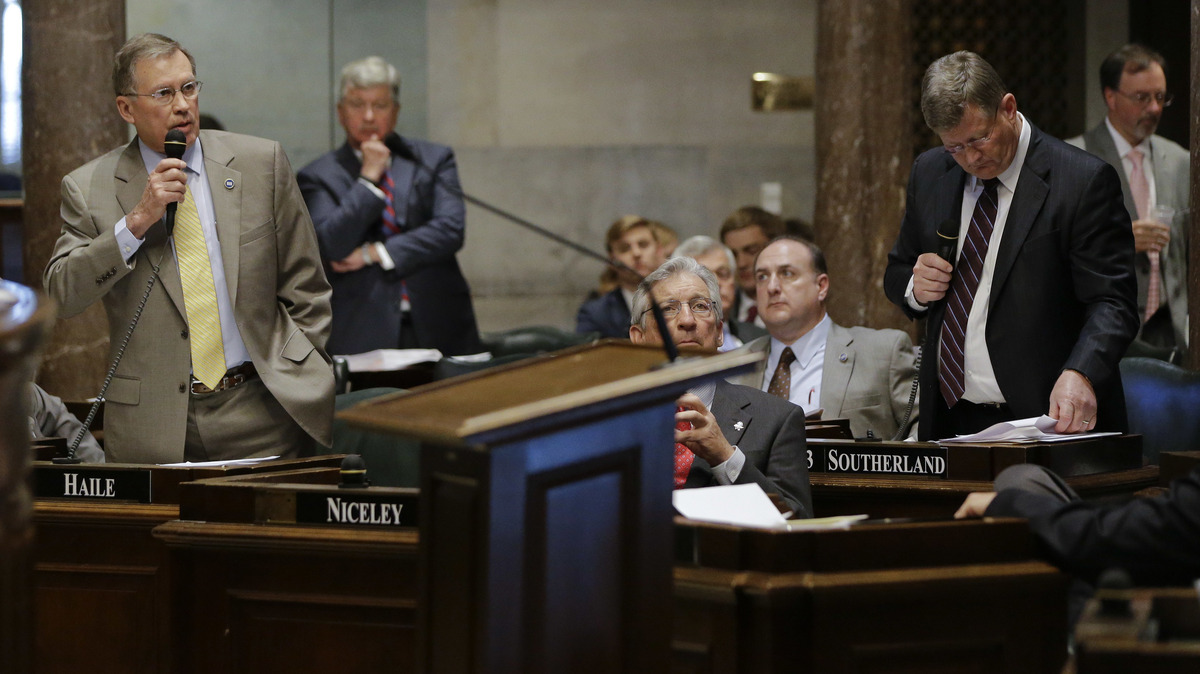 State Sen. Ferrell Haile, R-Gallatin (left), speaks during debate on a bill that would make the Bible the state book of Tennessee. At front right is Sen. Steve Southerland, R-Morristown, who sponsored the bill.

In what is believed to be a first, the Bible could be adopted as a symbol of Tennessee, after the Legislature narrowly approved a bill designating "the Holy Bible as the official state book." The measure now goes to Gov. Bill Haslam.

"Critics called the proposal both unconstitutional and sacrilegious," Nashville Public Radio reports. "They also pointed out there are many versions of the Bible, none of which are specified in the resolution."

The Senate version of the legislation, HB 0615, was sponsored by state Sen. Steve Southerland, R-Morristown, who noted the importance of the Bible in Tennessee's history — both in its role as a historic record of important family milestones and as the heart of the state's multimillion-dollar Bible-printing industry. He singled out publishers who have headquarters in Nashville: Thomas Nelson, Gideons International and United Methodists Publishing House.

After a debate over the bill, the Senate approved it on a 19-8 vote. Both Haslam and Attorney General Herbert Slatery have questioned whether the bill is appropriate or constitutional.

Speaking against the bill in the state Legislature last night, Sen. Ferrell Haile, R-Gallatin, quoted the Bible, stating that he believes "all Scripture is given by inspiration of God."

It's degrading to the religious book, Haile said, to put it on the same level as the state flower and bird. The senator also quoted another well-known idea: "Those who do not learn from history are doomed to repeat it."

He went on to cite history — specifically, the fourth century, when Roman ruler Constantine is often credited with converting the Roman Empire to Christianity. (Constantine famously converted to the religion, and his proclamations set the stage for the official conversion that soon followed.)

Haile said he believes "that proclamation caused more harm to Christianity than the 300 years of persecution prior to that."

He added, "The Bible is a book of history, but it's not a history book to be placed on a shelf. It's to be lived out in the lives of believers."

Another objection was raised by Sen. Lee Harris, D-Memphis, who said his constituents had voiced concerns that the bill highlights one religion above others.

"My constituents tell me that they want us to respect the diversity of faith traditions in the state of Tennessee, not just a single view or a single religious tradition," Harris said. "And I think they're right about the diversity of faith traditions in our state. One in five Tennesseans are not Christians. This group includes Tennesseans that are Jewish, Buddhist and also those that do not identify with a religion."

Saying that he is a Christian, Harris said he's against the bill because it's not fair to others in the state.

Responding to criticisms of the bill, Southerland said the Bible is not only about religion but also about ethics, economics and other matters. He drew part of that response, he said, from a study Bible.

"What we're doing here is recognizing it for its historical and cultural contributions to the state of Tennessee," Southerland said.

Back in 2005, the historical aspect of a religious display was one of the criteria the U.S. Supreme Court used to determine by a 5-4 vote that the state of Texas could keep a monument to the Ten Commandments at its state Capitol in Austin.

But in that same session, the high court also ruled 5-4 that similar displays in Kentucky counties were not permissible, on the grounds that the displays had a clear religious purpose, not a historical one. One key difference in the cases was that the Texas monument had been erected decades earlier, as a gift from a civic organization.