Accessibility links
Olympic Champion Greg Louganis Gets His Wheaties Box : The Two-Way The openly gay gold-medal winner said the box "means so much more to me than it would have then because I feel like I'm being embraced as a whole person, not just for my athletic achievements." 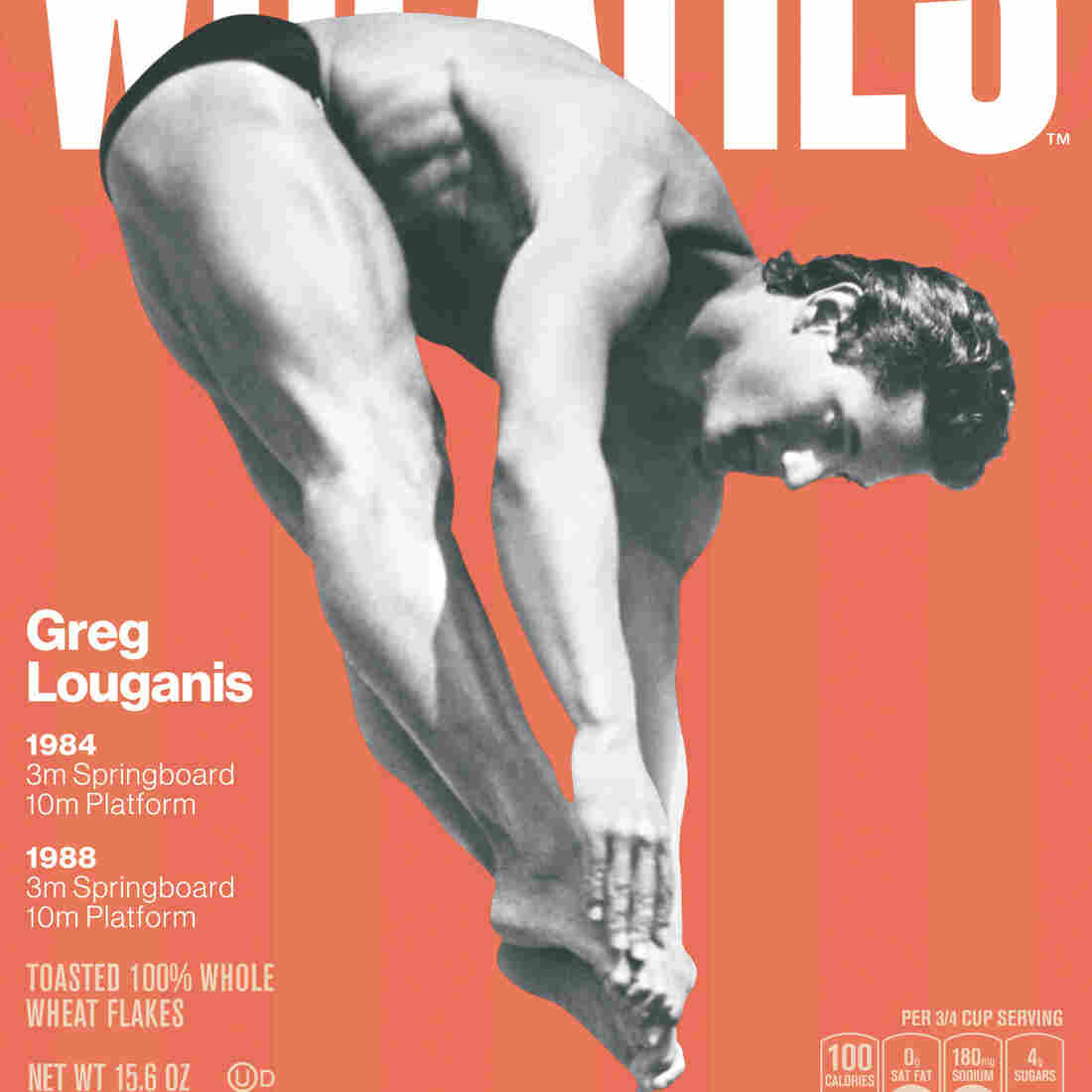 Greg Louganis in an inward dive pike on the front of the Wheaties box. The "legends" series boxes will be on shelves starting in May. Courtesy Of General Mills hide caption 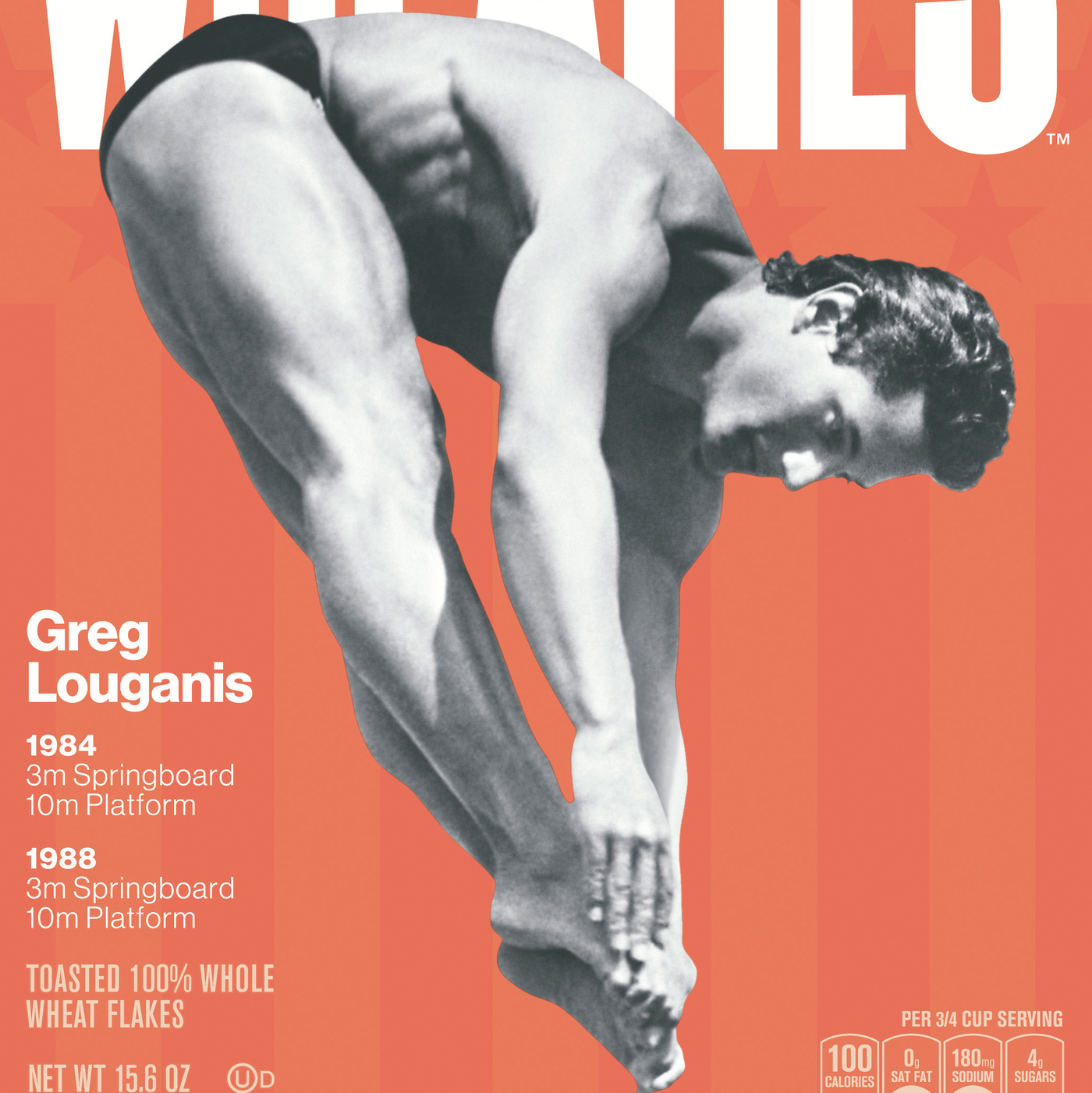 Greg Louganis in an inward dive pike on the front of the Wheaties box. The "legends" series boxes will be on shelves starting in May.

In his competitive diving career, four-time Olympic diving gold medalist and five-time world champion Greg Louganis has been all over the world. Now he'll be in one place that's eluded him for years: your kitchen table.

Wheaties announced that Louganis — who is openly gay and HIV-positive — along with two other former Olympians, hurdler Edwin Moses and swimmer Janet Evans, will be featured on the cereal boxes as part of the revamped "legends" series.

In a 2015 HBO documentary called Back on Board: Greg Louganis, the diver said he understood that he wasn't featured on the Wheaties box during the prime of his career in the 1980s because he didn't fit the company's requirement of a "wholesome image," as he was rumored to be gay. He came out publicly about his sexual identity and HIV-positive status in 1995.

Louganis says he is glad to finally be getting the recognition. 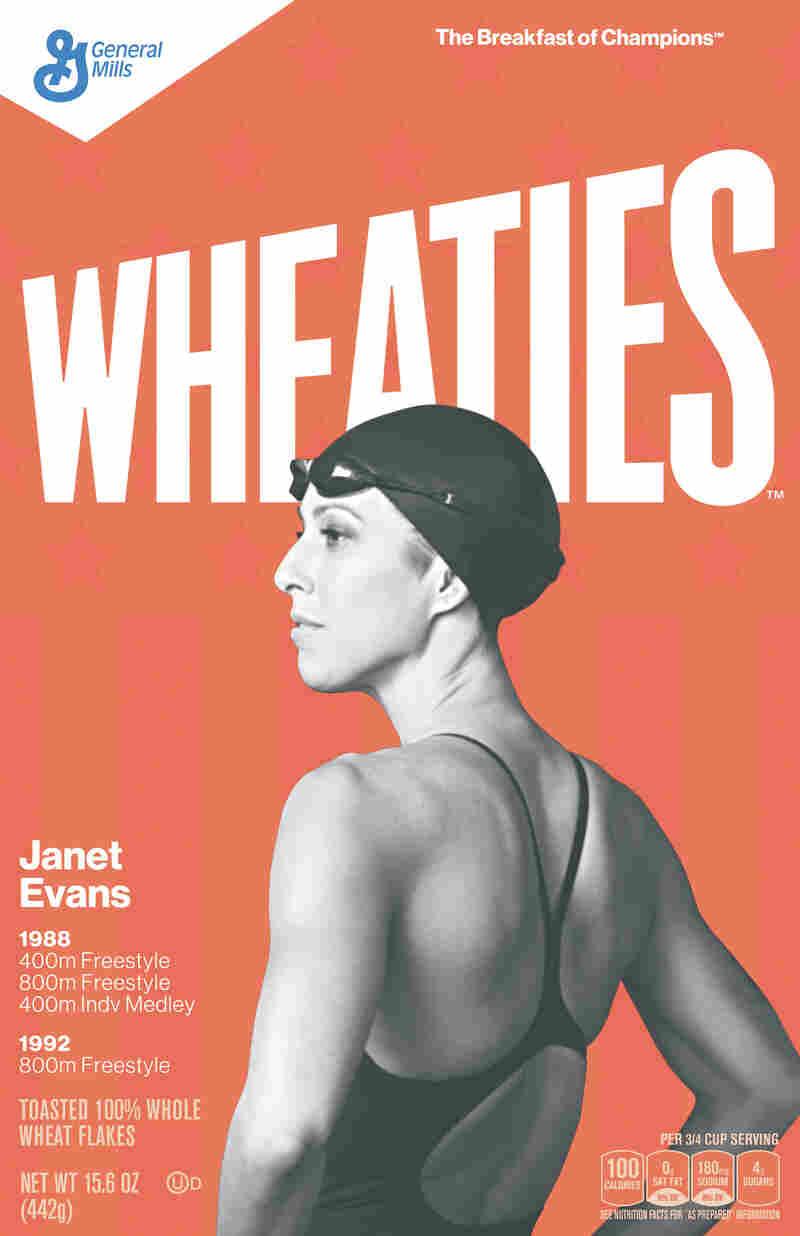 Janet Evans is one of the greatest women's distance swimmers in U.S. history.. Courtesy Of General Mills hide caption 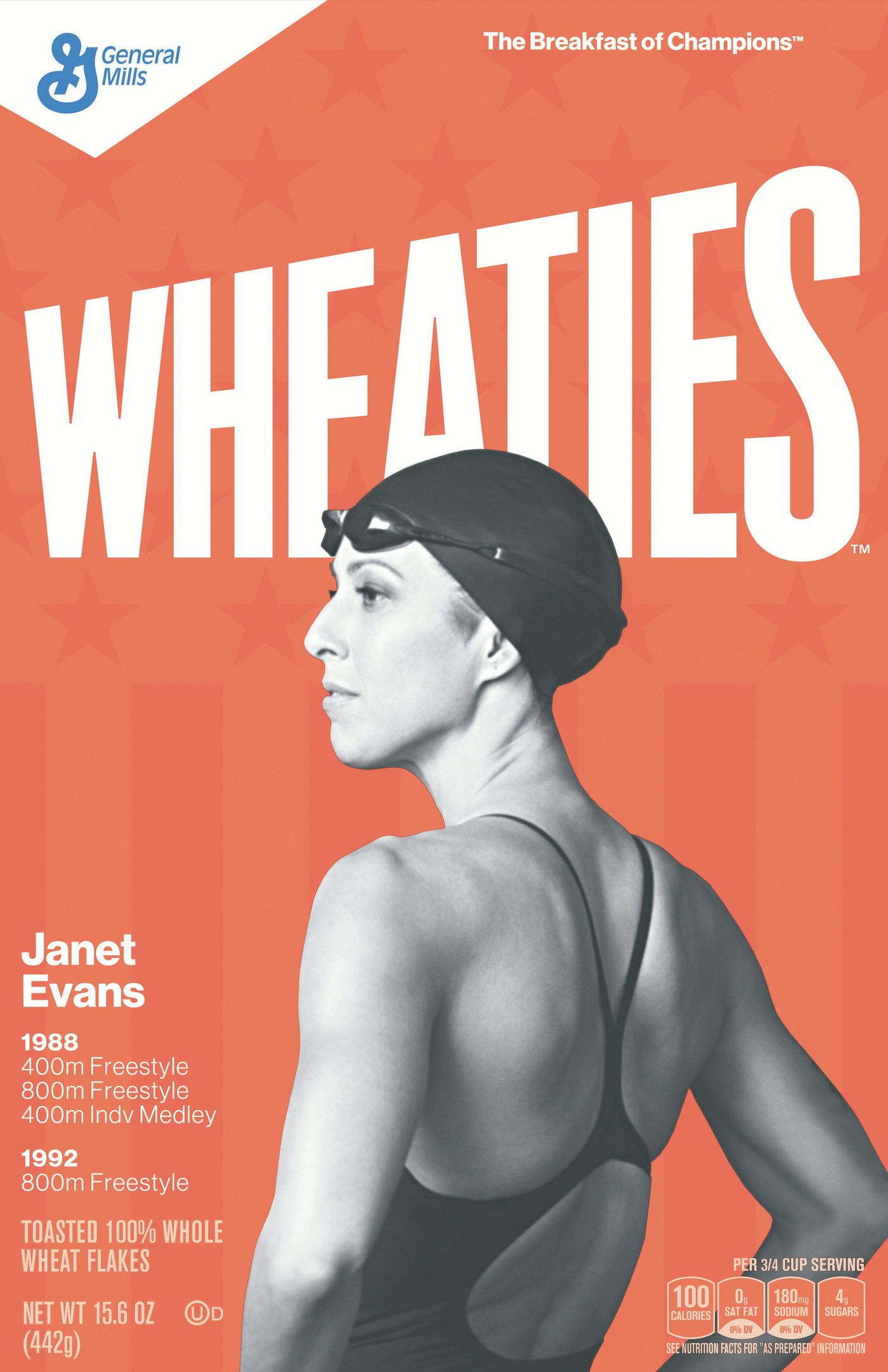 Janet Evans is one of the greatest women's distance swimmers in U.S. history..

"[It's] so incredible to be honored with the likes of Edwin Moses — we were in our first Olympic games in 1976 together," Louganis told NPR's All Things Considered. "Janet Evans — we trained at Mission Viejo together — I watched her grow up."

Louganis became the only man to sweep the Olympic diving events in back-to-back games when he won gold medals in both springboard and platform diving in the '84 and '88 Olympics. He's now a role model for other athletes including British Olympic diver Tom Daley, who came out as gay when he was around 20 years old. 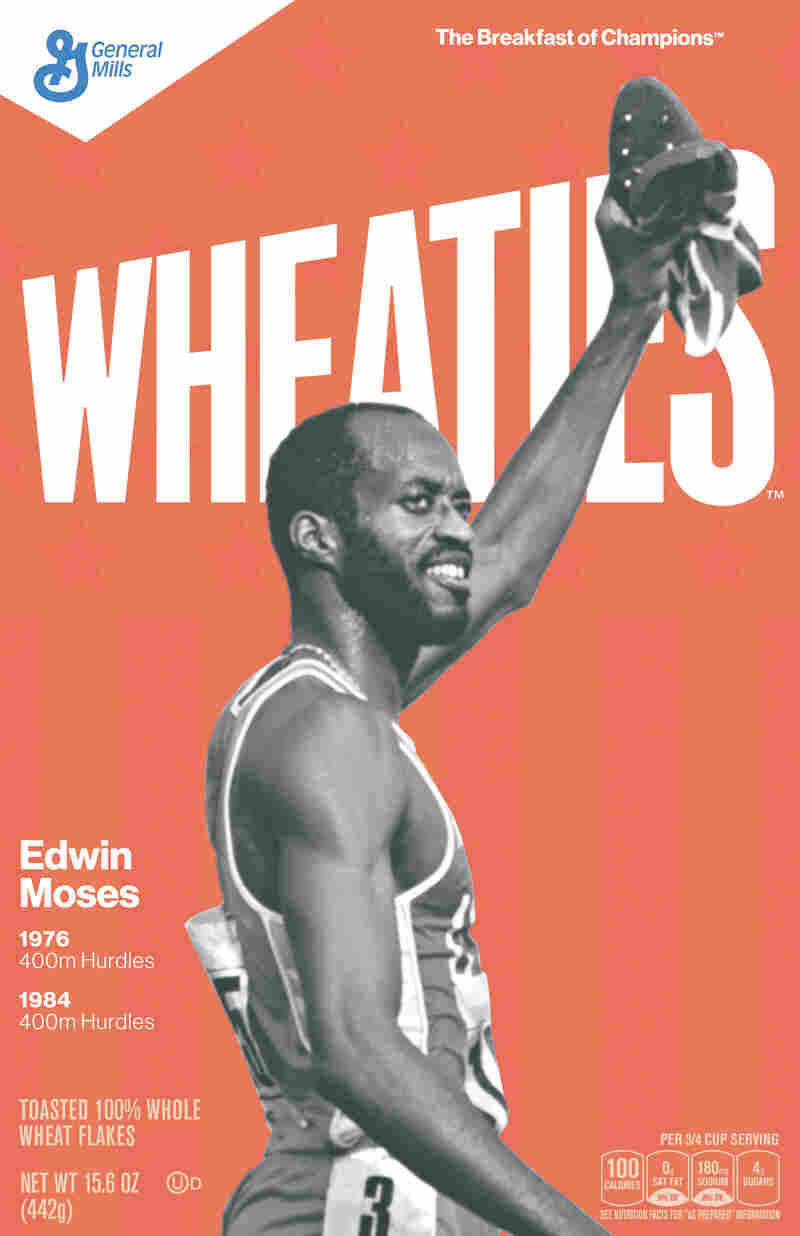 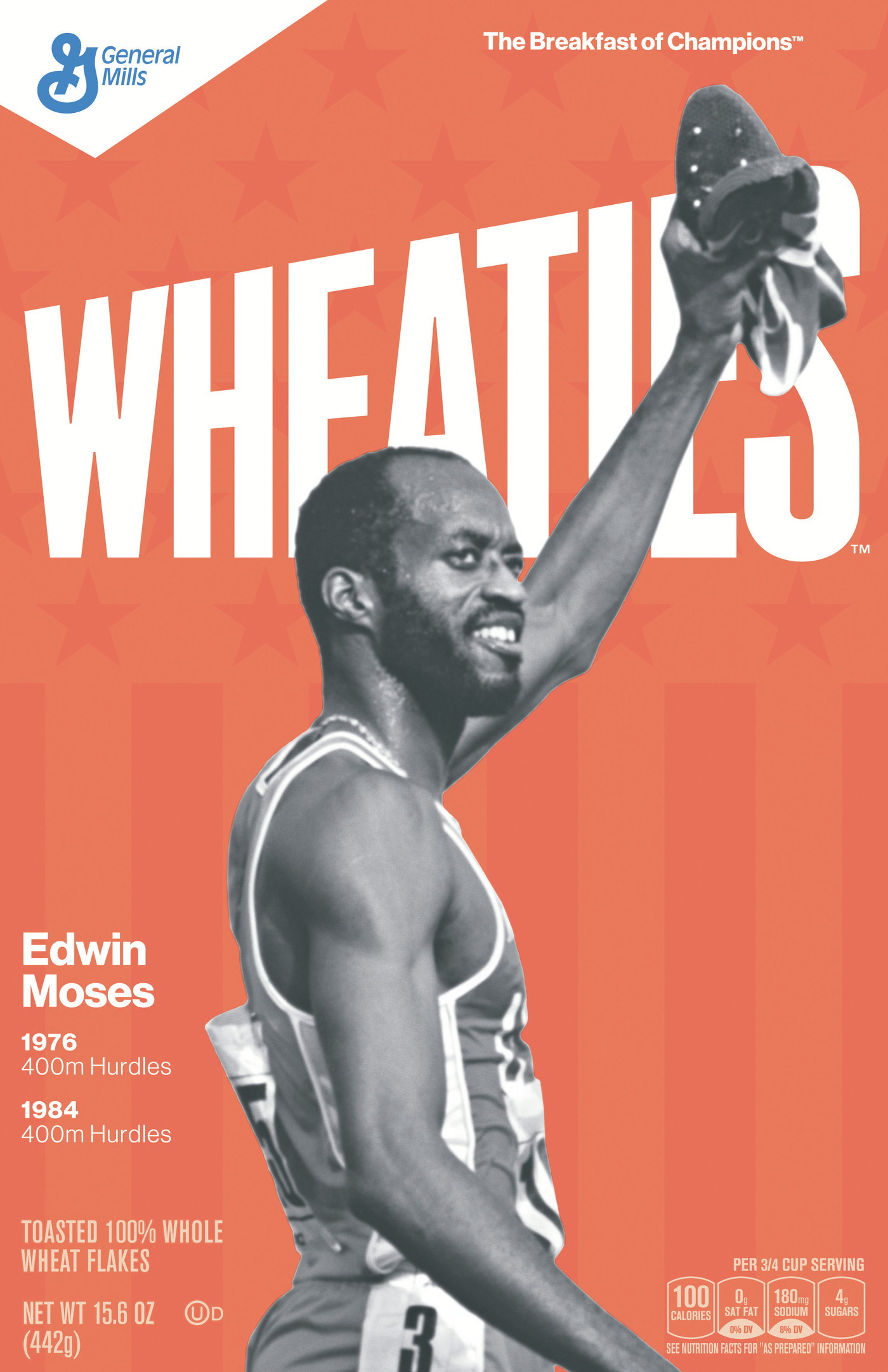 Edwin Moses was a three-time world champion in the 400-meter hurdles.

"I would have always wanted someone like him as a role model on the front of a cereal box," Daley told NPR's Ari Shapiro. "He's a great model and forever will be the greatest diver to walk this earth."

General Mills spokesman Mike Siemienas told NPR he couldn't provide an answer as to why Louganis wasn't on the box previously because no one who was involved in those decisions still worked at the company. Siemienas said a committee is responsible for determining which athletes are on the boxes.

Wheaties unveiled the "legends" cereal boxes after the documentary detailing Louganis' athletic career and experiences as a gay man sparked a petition on Change.org to get the diver on the iconic Wheaties cereal box. Created by Julie Sondgerath, who had never met Louganis, the petition garnered nearly 45,000 signatures.

Wheaties told NPR that the petition did not factor into the decision to put Louganis on a Wheaties box.

"We were aware of the petition, as we see this all the time from fans wanting their favorite athlete on the box," Siemienas said. "But appearing on a Wheaties box is not a popularity contest. Wheaties chooses athletes based on their achievements on and off their field of play."

As for Louganis, he says that he appreciates the honor more now than he would have in the 1980s.

"Back in '95, I wasn't expected to live very long because we thought of HIV-AIDS as a death sentence, so to be here today, now 56, the box means so much more to me than it would have then because I feel like I'm being embraced as a whole person, not just for my athletic achievements."

'Who Am I Without My Sport?' Greg Louganis On Life After Olympics