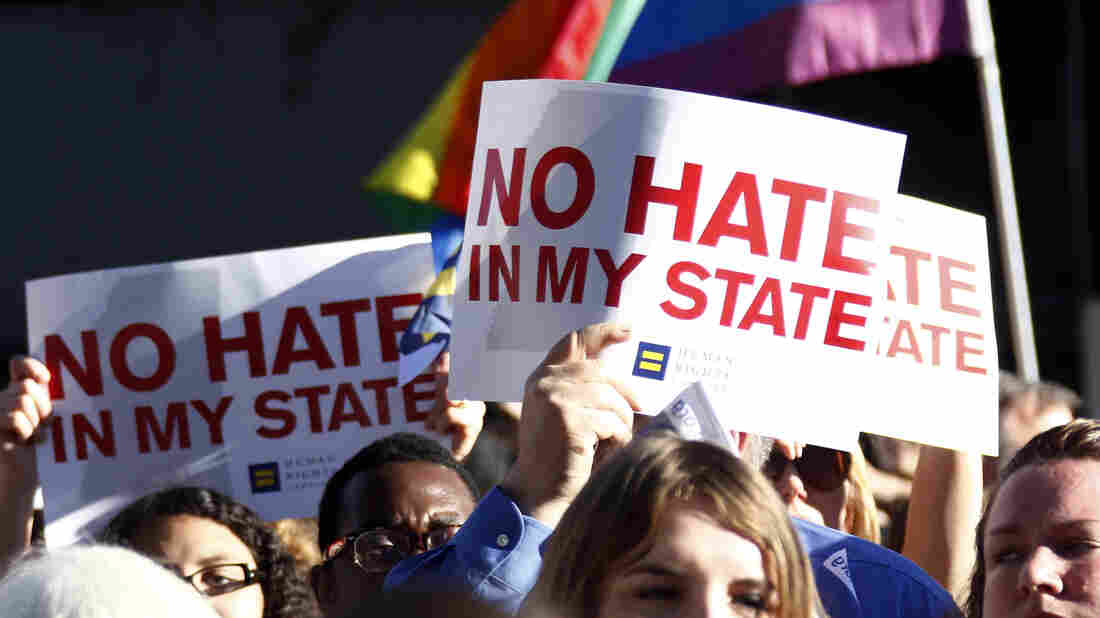 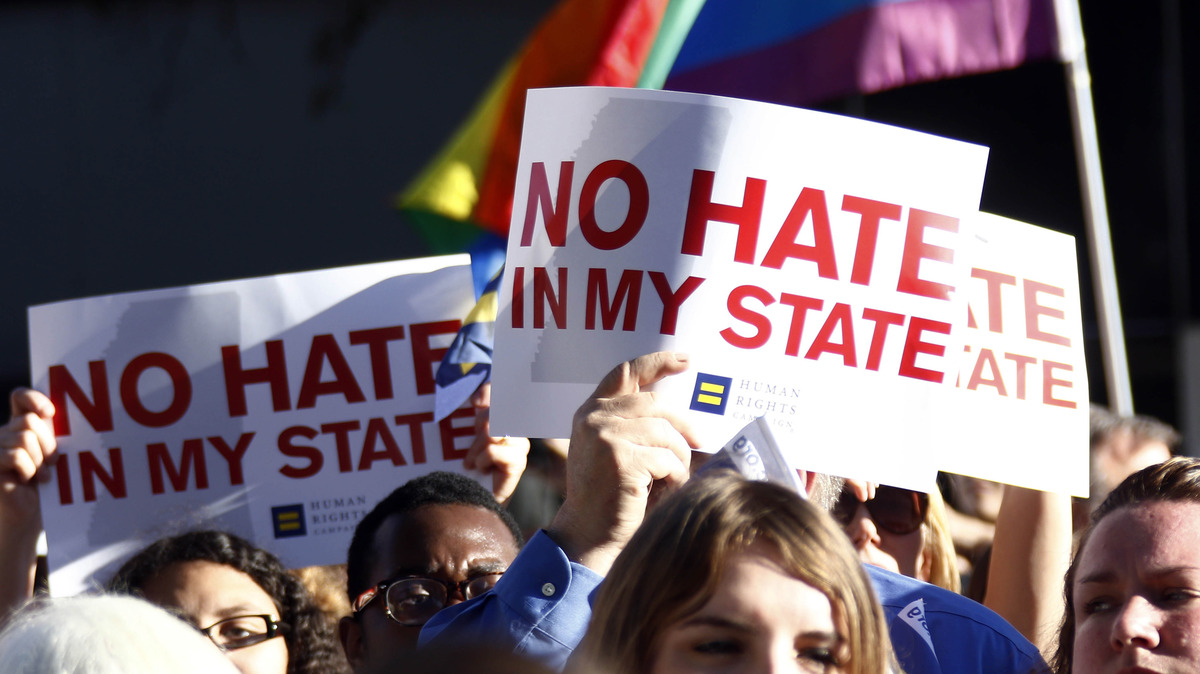 Protesters call for Mississippi Gov. Phil Bryant to veto House Bill 1523 during a rally outside the Governor's Mansion in Jackson, Miss., Monday. The governor signed the controversial bill into law on Tuesday.

The legislation, HB 1523, promises that the state government will not punish people who refuse to provide services to people because of a religious opposition to same-sex marriage, extramarital sex or transgender people.

Supporters say it protects the rights of people who are opposed to homosexuality but who now live in a country where same-sex marriage is a legal right.

Opponents say the law amounts to a state sanction for open discrimination.

In a statement on Twitter, Bryant said he signed the bill into law "to protect sincerely held religious beliefs and moral convictions ... from discriminatory action by state government."

He said the new law "merely reinforces" existing religious freedom rights, "does not limit any constitutionally protected rights or actions" and does not challenge federal law.

"The legislation is designed in the most targeted manner possible to prevent government interference in the lives of the people from which all power to the state is derived," Bryant said.

The law is not a broad religious-protections law, such as many recent controversial state laws. As we reported last week, the Mississippi legislation protects only three beliefs or convictions: that marriage is between a man and a woman, that sex is "properly reserved to such a marriage," and that words like "male" and "female" are "objectively determined by anatomy and genetics at birth."

The law protects, among other things, state employees who refuse to license marriages, religious organizations who fire or discipline employees and individuals who decline to provide counseling or some medical services based on those oppositions.

Even without such a law, it is already legal in Mississippi — as in most states in the country — to discriminate against LGBT people in providing employment, housing and public accommodation.

The law's language also suggests protections for those who deny services based on an opposition to premarital sex; but similarly, it was already legal in Mississippi to deny an unmarried couple housing because of a moral objection.

Paul Boger of Mississippi Public Broadcasting reports that Republican state Rep. Andy Gipson of Braxton, who introduced the measure, says it has been misrepresented.

"It specifically says that is a case where a person has a religious conviction, they can decline, but they must provide somebody in their office to provide that service," Gipson says. That requirement covers state employees declining to license or perform a marriage.

LGBT advocates in Mississippi had been calling for Bryant, a Republican, to veto the legislation, as had members of the business community such as the Mississippi Manufacturers Association, Nissan North American and Tyson Foods.

The Family Research Council described business opposition to the measure as "economic blackmail" and celebrated Bryant's signature. "No person should be punished by the government with crippling fines, or face disqualification for simply believing what President Obama believed just a few years ago, that marriage is the union of a man and a woman," FRC President Tony Perkins said in a statement.

The American Civil Liberties Union of Mississippi's executive director, Jennifer Riley-Collins, said in a statement, "This is a sad day for the state of Mississippi and for the thousands of Mississippians who can now be turned away from businesses, refused marriage licenses, or denied housing, essential services and needed care based on who they are. This bill flies in the face of the basic American principles of fairness, justice and equality and will not protect anyone's religious liberty."

The law goes into effect July 1.

Republican Gov. Nathan Deal of Georgia recently vetoed a religious liberties bill in his state, saying, "I do not think that we have to discriminate against anyone to protect the faith-based community in Georgia, of which I and my family have been a part of for all of our lives."

The Walt Disney Co. and Time Warner, among other major companies, had all called for Deal to veto the bill.

In North Carolina, another controversial measure — mandating that all bathrooms at state facilities be separated by sex as assigned at birth, prohibiting local governments from creating their own anti-discrimination ordinances and also blocking cities and counties from raising their minimum wages — was introduced, passed and signed into law over the course of a single day last month.

On Tuesday, PayPal announced it was canceling plans to expand into Charlotte, N.C., in response to that new law. PayPal CEO Dan Schulman said in a statement it would be "untenable" to move forward in a state where all employees would "not have equal rights under the law." The planned operations center would have employed 400 people, PayPal's statement said.