Accessibility links
Fallout From Panama Papers Echoes Around The World : The Two-Way International investigative reporting, powered by a data breach, links titans of business and politics to secret offshore bank accounts. The reports are prompting investigations and public backlash. 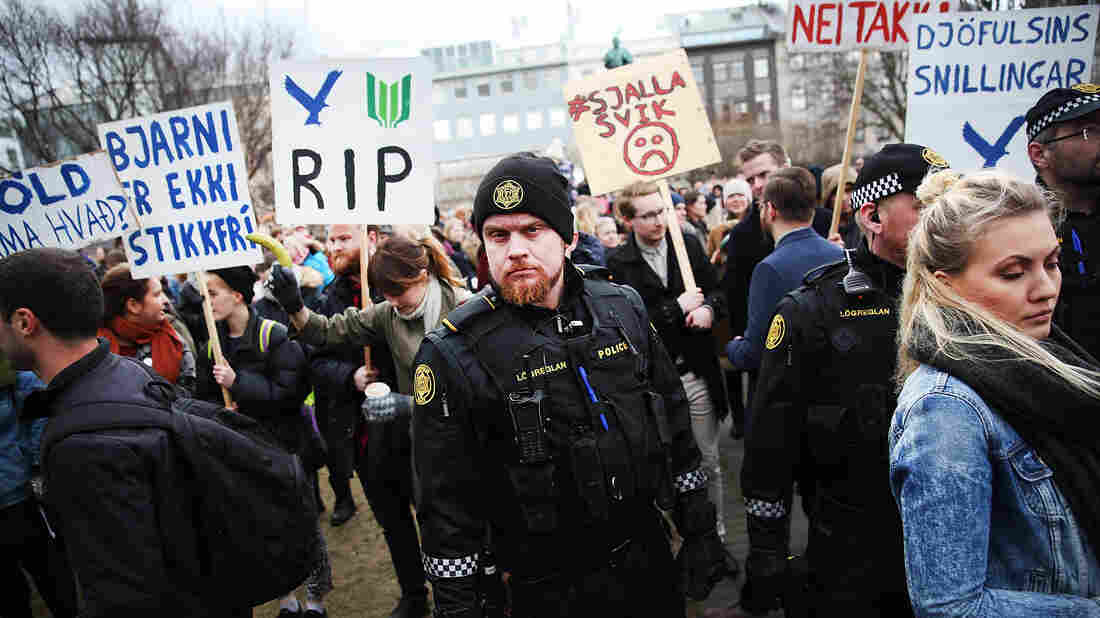 Police stand watch Tuesday as protesters gather outside the Parliament building in Reykjavik, Iceland. The prime minister resigned after he was named in the Panama Papers as having set up secret offshore accounts through a shell company that was seeking money from failed Icelandic banks that received government bailout funds. Spencer Platt/Getty Images hide caption 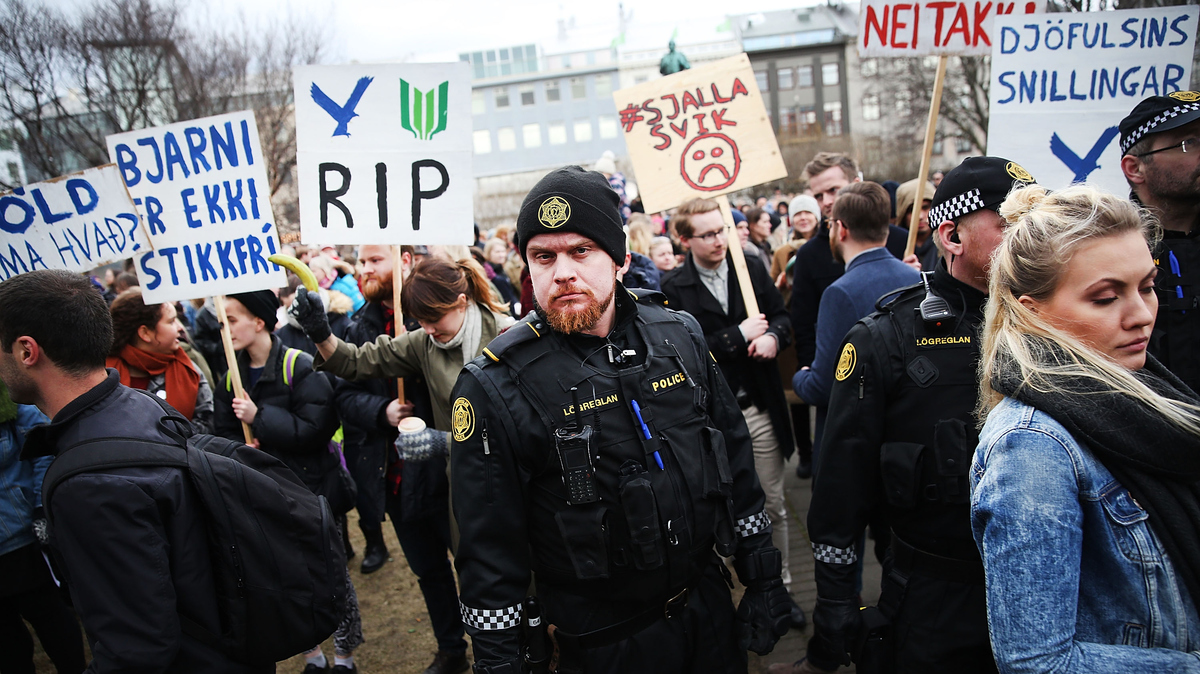 Police stand watch Tuesday as protesters gather outside the Parliament building in Reykjavik, Iceland. The prime minister resigned after he was named in the Panama Papers as having set up secret offshore accounts through a shell company that was seeking money from failed Icelandic banks that received government bailout funds.

The massive trove of emails, contracts and other papers from Panamanian law firm Mossack Fonseca is being called the largest document leak in history.

For more than a year, a huge team of international investigative journalists sifted through the data. On Sunday, the German paper Süddeutsche Zeitung and members of the International Consortium of Investigative Journalists began publishing stories linking titans of business and politics — including 12 former and current heads of state — to secret offshore bank accounts and shell companies set up by Mossack Fonseca.

As we reported Monday, much of the behavior revealed by the leaked documents isn't itself a crime — it's legal to have offshore bank accounts. But the accounts can be used to launder money or hide incriminating connections. The team of journalists has said it would release a full list of people and corporations involved next month.

Around the world, the revelations are prompting public backlash, official investigations and at least one high-profile resignation.

In some countries, though, they're being met by a different kind of resignation — a familiar sigh, and collective shrug.

Here's a sampling of the fallout so far.

The prime minister of Iceland stepped aside on Tuesday after widespread outrage and massive street protests. A statement from his office issued later says he has not resigned, but has suggested that a representative from his party take over the office "for an unspecified amount of time."

The Panama Papers say that Sigmundur David Gunnlaugsson and his wife had secretly set up offshore accounts through a shell company that was seeking money from failed Icelandic banks that received government bailout funds.

"Gunnlaugsson said he and his wife paid all their taxes and have done nothing illegal," The Associated Press reports. "He also said his financial holdings didn't affect his negotiations with Iceland's creditors during the country's acute financial crisis. Those assertions did little to quell the controversy."

While Russian President Vladimir Putin isn't directly implicated in the leaked documents made public so far, many members of his close personal circle are — a network of rich, powerful friends explored by The Guardian.

Putin's spokesman has fired back, calling the allegations "Putinphobia" and saying the publication of the Panama Papers was intended to destabilize Russia as it heads toward elections, the newspaper reports.

Many of the largest media outlets in the U.S., including NPR, were not part of the international team of investigators working with the data behind the Panama Papers. Exceptions include the Miami Herald, The Charlotte Observer and Fusion.

Relatively few Americans — just over 200 — have been identified, according to the reports published so far. Fusion spoke to experts who said that is, in part, because Americans can form offshore companies without needing to leave the U.S.

But the Justice Department says it will review the documents and that it "takes very seriously all credible allegations of high-level, foreign corruption that might have a link to the United States."

"A lot of it's legal, but that's exactly the problem," he said.

The head of the Chilean office of Transparency International — an anti-corruption watchdog — stepped down Monday, after the leaked documents tied him to offfshore companies.

"Jose Ugaz, chair of the Berlin-based group, said he was deeply troubled by revelations that Delaveau, a lawyer, was linked to five companies domiciled in the Bahamas.

"Delaveau is not accused of any wrongdoing but Ugaz said his continued affiliation with Transparency International is incompatible with the group's aims to register the beneficial owners of all shell companies to make it harder for the corrupt to hide illicit wealth."

After the revelations, the French government says it will put Panama on its blacklist of uncooperative tax jurisdictions — again.

But the Panama Papers changed their minds.

Current President Mauricio Macri, soccer star Lionel Messi and a close associate of former President Nestor Kirchner have all been implicated by the papers.

That's a problem for Macri, who campaigned on an anti-corruption platform vowing to clean up the mess left by former President Cristina Fernandez de Kirchner, Nestor's widow.

There are calls for an investigation, NPR's Lourdes Garcia-Navarro reports.

"Brazil has had so many corruption disclosures lately, and its in the middle of a political crisis — so this is just one more to the list," she says.

Prime Minister David Cameron isn't named in the data leak, according to reporters investigating the papers, but his father is.

"David Cameron's father ran an offshore fund that avoided ever having to pay tax in Britain by hiring a small army of Bahamas residents — including a part-time bishop — to sign its paperwork," The Guardian writes.

That's led to pressure on the prime minister to discuss whether any of his family's money is still being held in that offshore account, a question his office first refused to discuss.

His spokesman's description of the question as "a private matter" earned him the mockery of former NSA contractor and leaker Edward Snowden.

Later a spokesman for Downing Street said the prime minister's immediate family doesn't benefit from offshore funds, without addressing whether they had ever done so in the past.

The public response in Pakistan has similarly been devoid of shock, NPR's Philip Reeves reports from Islamabad.

While the family of Prime Minister Nawaz Sharif is implicated by the papers — which has been seized upon by the local media and some members of the opposition — it comes as no surprise to the country's citizens that the ruling class is corrupt, Phil says.

Cultural icons were among those named by the Panama Papers in Spain --director Pedro Almodóvar and his brother; the aunt of Spain's king; and soccer star Messi, who plays for Barcelona.

But as in Pakistan, the public outcry has been muted, Lauren Frayer reports for NPR from Madrid.

"Spaniards tend not to be terribly surprised these days about corruption or money-laundering allegations," she says, noting that Messi was already awaiting trial for tax fraud.

The Panama Papers implicate the families of several Chinese politicians, including the brother-in-law of President Xi Jinping.

China has dismissed the reports as "groundless," the AP reports.

In 2012, Bloomberg reported on the vast wealth of Xi's in-laws, noting that much of it was "obscured from public view by multiple holding companies, government restrictions on access to company documents and in some cases online censorship."

While the revelations aren't entirely new, NPR's Anthony Kuhn reports, they have been heavily censored by China.

Searching for the Panama Papers in China will return results about Lionel Messi and other non-Chinese people in the papers, but nothing about Chinese figures, the AP writes.

Anthony also notes that the same international team of investigative reporters behind the Panama Papers has previously faced intimidation from China's government related to a different investigation, causing Chinese members of the cooperative effort to withdraw.

As the fallout from the leak continues, Panama is attempting to fight its reputation as a haven for tax evaders and money launderers, the AP reports.

"Panamanians have long shrugged off their country's checkered reputation as a financial haven for drug lords, tax dodgers and corrupt oligarchs. They like to joke that if they're crooks, they've learned it from the world's wealthy nations," the wire service writes. It adds:

"Panama cemented its status as a money-laundering center in the 1980s, when dictator Gen. Manuel Noriega rolled out the red carpet to Colombian drug cartels. It has remained a magnet for illicit money, as well as for legitimate funds, because its dollarized economy sits at the crossroad of the Americas. ...

"But Panama isn't alone in its permissive attitude toward shell companies, which the British-based Tax Justice Network estimates hide $21 trillion to $32 trillion in untaxed or lightly taxed financial wealth around the globe. Panama ranks 13th on the watchdog group's financial secrecy index — better than the U.S., which is at No. 3."