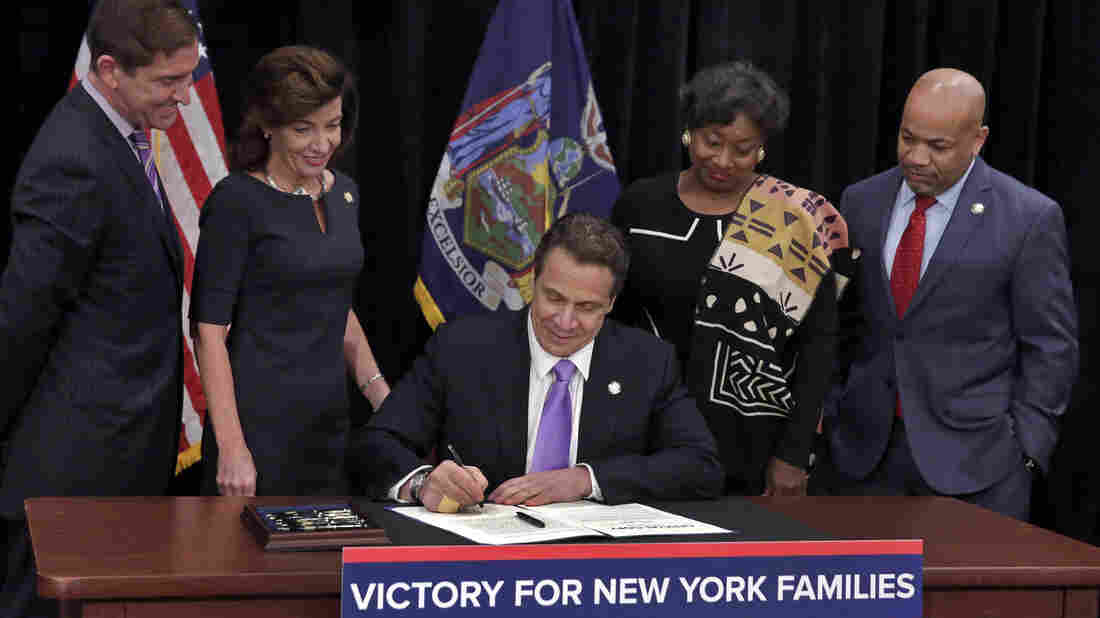 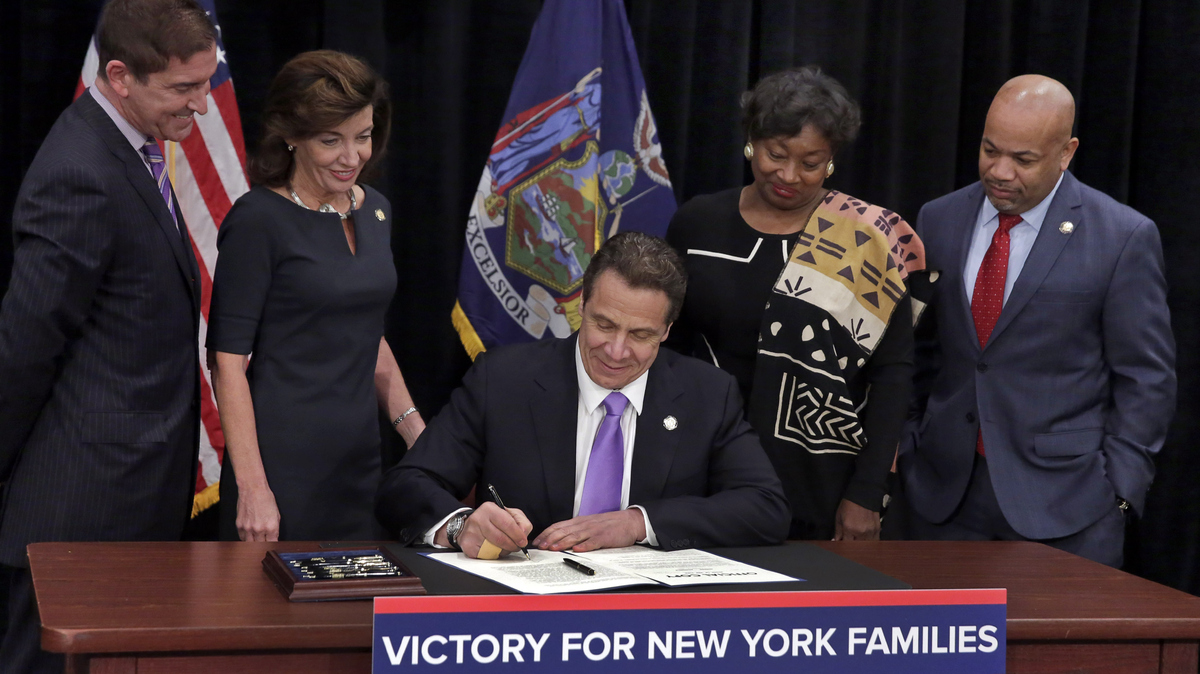 Two record-setting parental-leave laws were passed this week, on opposite sides of the U.S.

In New York, the state became the fourth in the country to offer some form of paid parental leave to residents. When fully implemented, the state's program will compensate parents for up to 12 weeks of leave — twice what's currently covered in the most generous states.

And in San Francisco, city supervisors voted to require employers to give workers six weeks of paid parental leave — not just partially paid, but fully paid. It's the first U.S. city to pass such a measure.

The State Of Parental Leave In The U.S.

"U.S. labor laws date to the 1930s, a time when most families had a stay-at-home mother," NPR's Jennifer Ludden noted in 2014. "The only federally mandated leave covers just half of the workforce, and many people tell pollsters they can't afford to use it because it's unpaid."

That's the Family and Medical Leave Act, which was established in 1993 and allows employees to take up to 12 weeks per year of unpaid leave to care for a new baby or a sick family member.

But it doesn't cover many part-time workers and excludes anyone working at a company with fewer than 50 employees. And while it allows new parents to keep their health insurance and have a job to return to, it doesn't help pay the rent or the mortgage.

Some states have expanded FMLA for their residents, either making it last longer or making it available for more people.

Washington state passed a paid-parental-leave law, but it was put on hold and has never gone into effect. (The chart below includes only currently active policies.)

On Monday, New York Gov. Andrew Cuomo signed a parental-leave policy into law as part of a state budget deal (which also mandated a statewide minimum wage of $15 an hour).

The leave policy will begin to be implemented in 2018, covering 50 percent of a worker's average wages for up to eight weeks — already the longest period of time covered by a state leave policy.

And when fully implemented, the policy will cover 67 percent of a worker's average wages for up to 12 weeks, fully twice as long as any of the current state policies.

A statement from Cuomo's office described the paid-leave plan as "a major accomplishment in the Governor's efforts to restore economic justice and fairness to working families."

Like the other states that have implemented paid leave, New York will impose a cap on the money paid out to workers each week, and the leave payments will be funded by an employee payroll deduction.

But some business leaders have objected that even if businesses aren't paying for the leave directly, the new law will pose a compliance challenge. Or they are concerned it will "add to perception that the Empire State is hostile to business," as Heather Briccetti of the Business Council put it, according to a report by Syracuse.com.

San Francisco: 'The United States Has Fallen So Far Behind'

San Francisco's new measure, approved by the city's board of supervisors Tuesday and expected to receive Mayor Ed Lee's signature, affects businesses with more than 20 employees and will go into effect in 2017.

The measure works hand in hand with California's existing parental-leave policy — which, as noted above, covers 55 percent of a new parent's income during his or her leave.

The new San Francisco measure will require businesses to pay the remaining 45 percent. 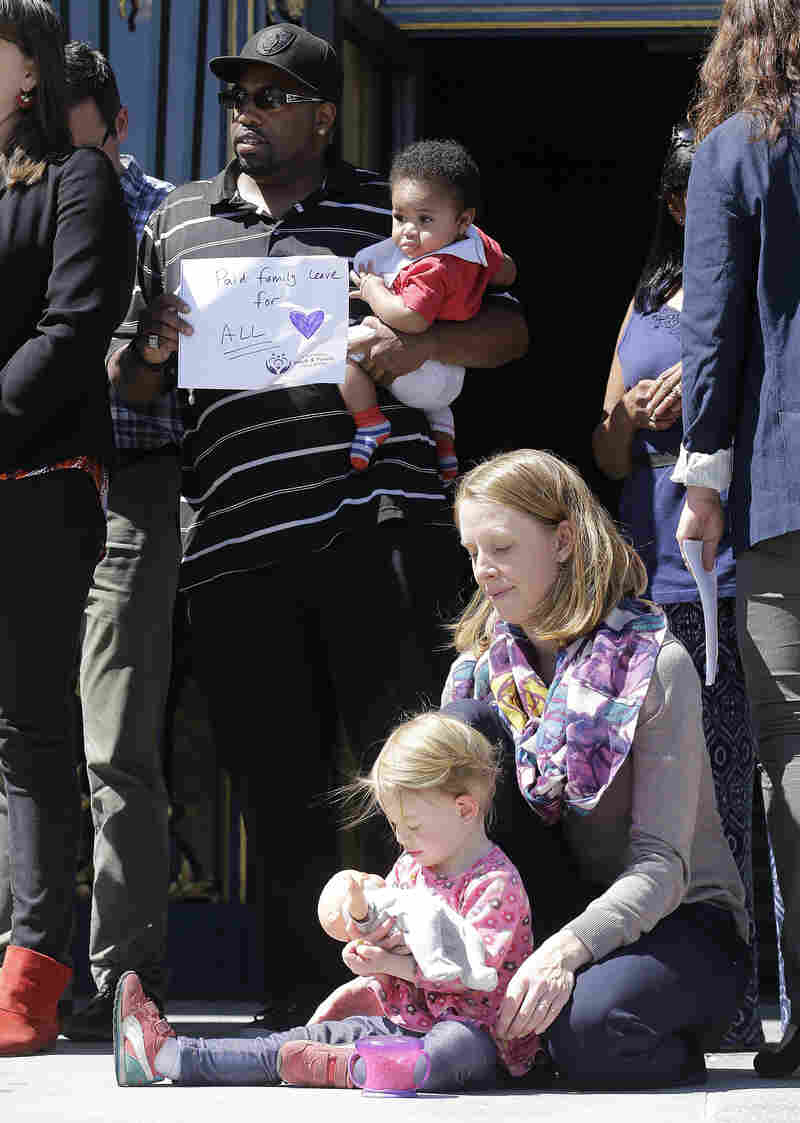 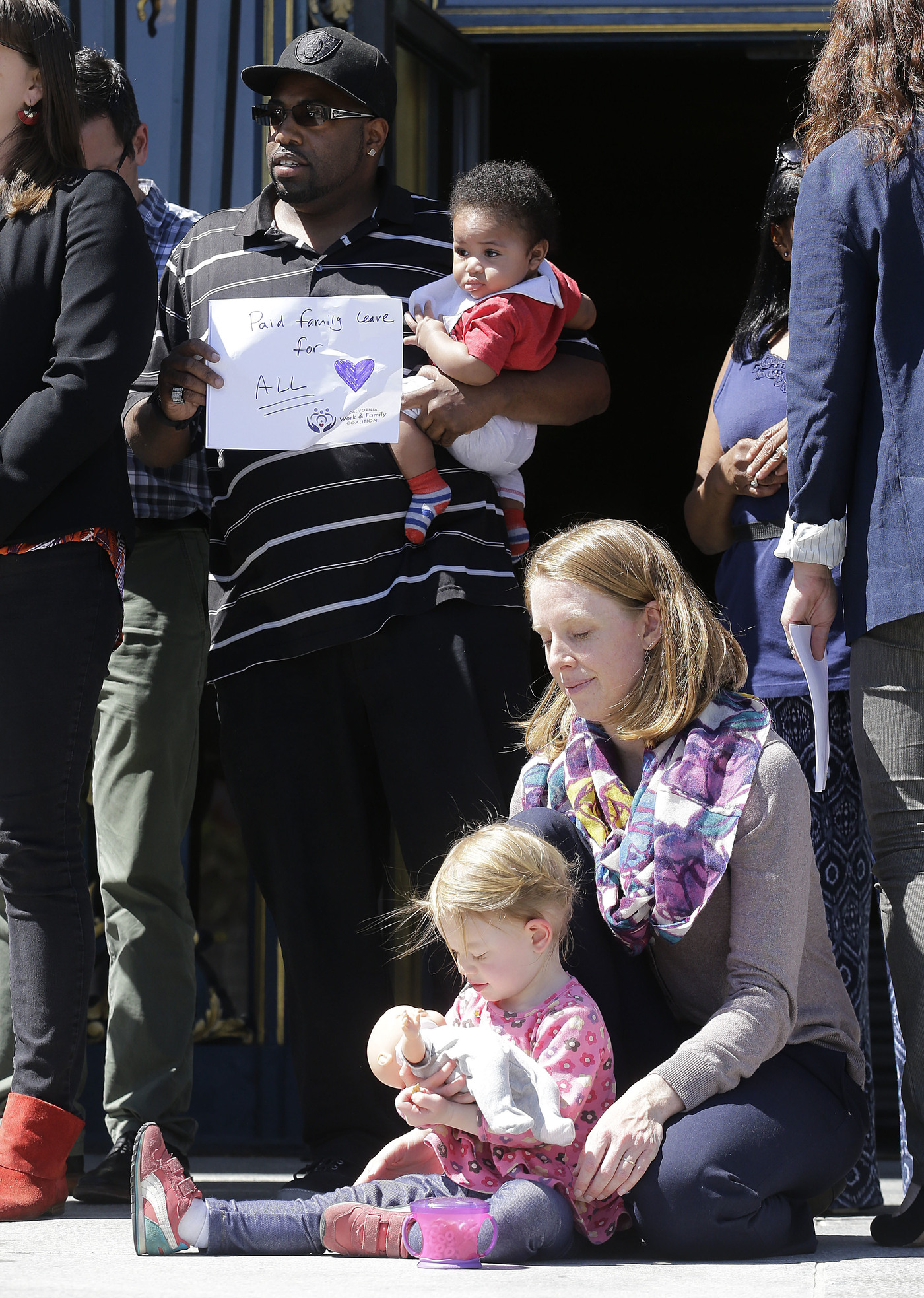 "The United States has fallen so far behind the rest of the world in providing paid parental leave," city Supervisor Scott Wiener said in a statement. "We shouldn't force mothers and fathers to choose between taking care of their child and putting food on the table."

The Small Business Commission of San Francisco voted 6-1 to express its opposition to the new rules, saying it would put businesses at a competitive disadvantage compared with businesses in neighboring counties and threaten their profit margins.

"Ultimately this type of legislation, ironically, harms the employees of the small businesses," florist and small-business commissioner Kathleen Dooley said in that meeting. "Because faced with more and more financial hits, the small-business employers who are generally pretty supportive of their employees are going to be pushed against the wall, and the fallout will be that they will hire less employees."

The San Francisco Chamber of Commerce notes that small businesses will have additional time to come into compliance with the law.

The Associated Press notes that San Francisco has been spearheading employee protection laws for years now:

"For example, San Francisco approved a $15 hourly minimum wage for workers in 2014, a mandate that California Gov. Jerry Brown signed into law Monday for the entire state.

"In 2007, San Francisco officials required businesses to set aside money to be used toward employee health care, long before the federal government approved the Affordable Care Act.

"And in 2006, San Francisco voters approved paid sick leave, the first in the country to require the benefit."