Accessibility links
Pope Francis Calls For More Grace, Less Dogma On Divorce And Remarriage : The Two-Way On Friday, Pope Francis announced that the Catholic Church should work with couples to determine the best choices for them. He spoke of prioritizing individual conscience on contraception, too. 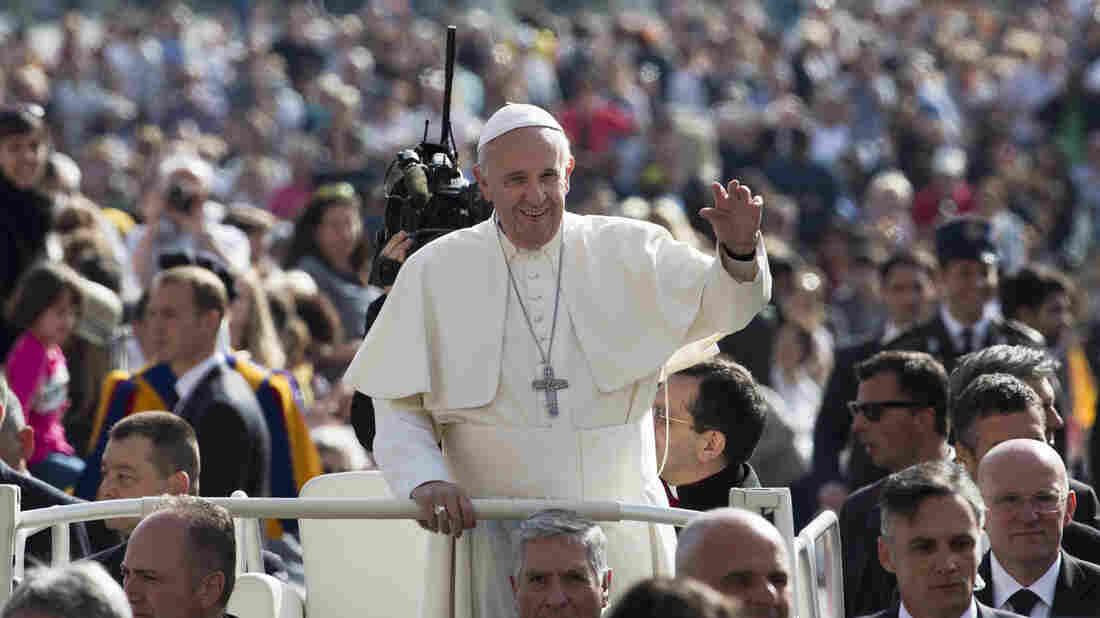 Pope Francis at his weekly general audience in St. Peter's Square on Wednesday. On Friday he released a post-synodal apostolic exhortation called "Amoris Laetitia," or "The Joy of Love." Andrew Medichini/AP hide caption 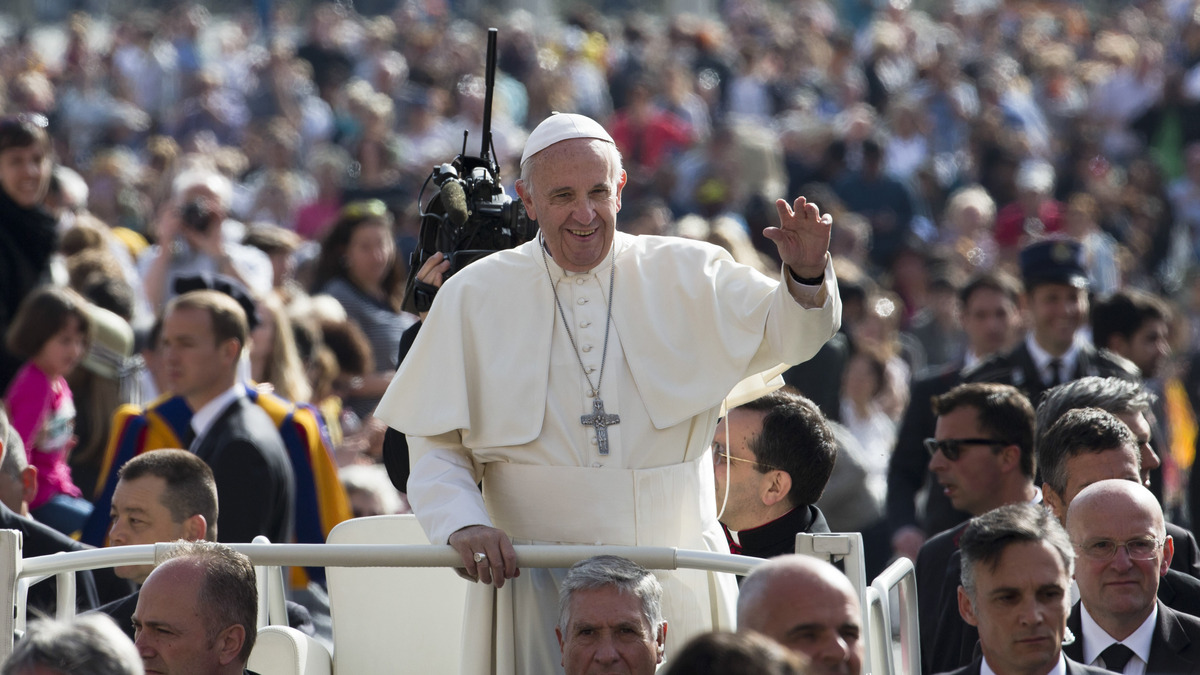 Pope Francis at his weekly general audience in St. Peter's Square on Wednesday. On Friday he released a post-synodal apostolic exhortation called "Amoris Laetitia," or "The Joy of Love."

In a major document released Friday, Pope Francis addressed divisive elements of Catholic doctrine — including how to treat couples who remarry after a divorce that wasn't annulled by the church, and the church's stance on contraception.

Without issuing any new top-down doctrine, Francis said that priests should focus on providing pastoral care for Catholic couples, rather than sitting in judgment of them, and that individual conscience should be emphasized, rather than dogmatic rules.

The document — a post-synodal apostolic exhortation called "Amoris Laetitia," or "The Joy of Love" — is more than 250 pages long.

In it, the pope emphasizes that life is more complicated than religious law. In the opening pages, he invokes the values of "generosity, commitment, fidelity and patience," but also says he wishes to "encourage everyone to be a sign of mercy and closeness wherever family life remains imperfect or lacks peace and joy." 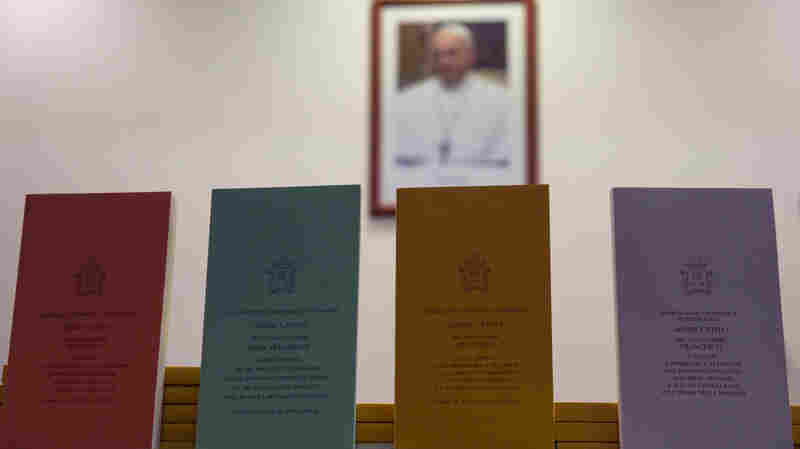 Copies of the post-synodal apostolic exhortation "Amoris Laetitia" (The Joy of Love) are on display at a press conference at the Vatican on Friday. In it, Pope Francis writes that individual conscience should be the guiding principle for Catholics negotiating the complexities of sex, marriage and family life. Andrew Medichini/AP hide caption 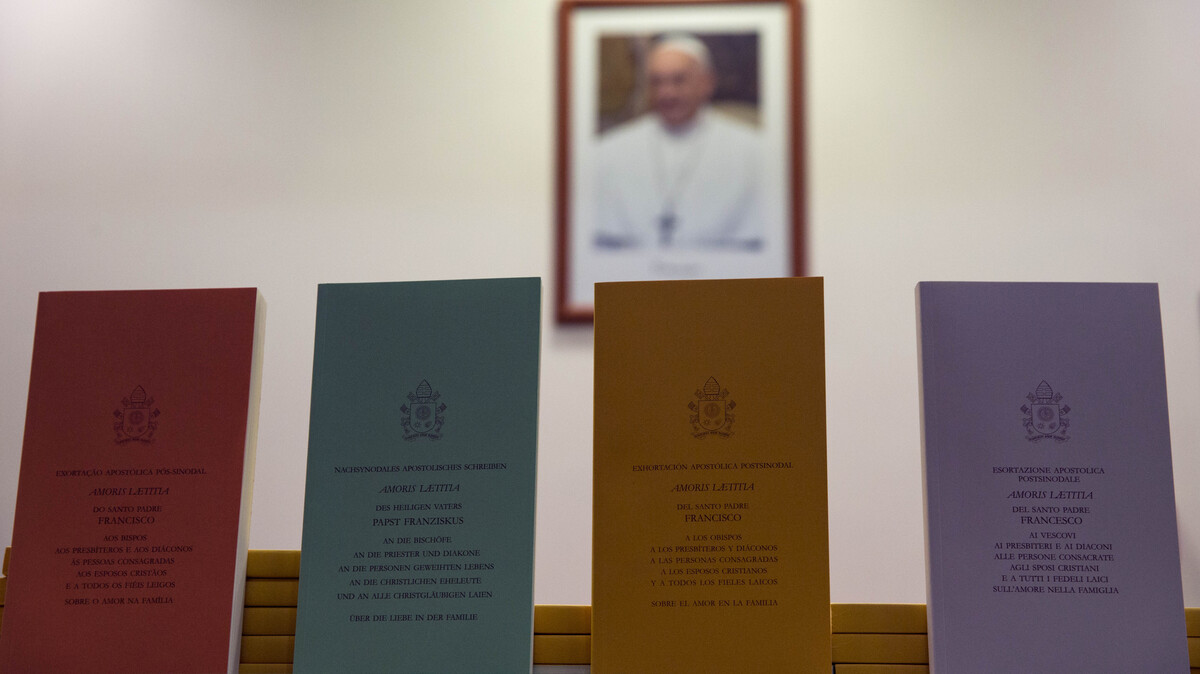 Copies of the post-synodal apostolic exhortation "Amoris Laetitia" (The Joy of Love) are on display at a press conference at the Vatican on Friday. In it, Pope Francis writes that individual conscience should be the guiding principle for Catholics negotiating the complexities of sex, marriage and family life.

He explains that in Amoris Laetitia, in addition to considering scripture, he will "examine the actual situation of families, in order to keep firmly grounded in reality." And he notes that Jesus set forth a demanding ideal for his followers — but "never failed to show compassion and closeness to the frailty of individuals."

Joshua McElwee of the National Catholic Reporter told NPR's Morning Edition that the exhortation has a very different tone than previous church pronouncements on these subjects.

The focus on "conscience" as a determining factor is key, McElwee says. He explains what that means in this context:

"That's something that the church talked about 50 years ago, but the last couple of popes did not expand upon. And what Pope Francis is saying is that conscience means that people can be hearing something from God, kind of in the depths of their heart, that may even be not quite in accord with what the church teaches generally, as a general norm, but can still be true and can still be discerned to be God's will in their life. So he's allowing for a little bit of discord between individual cases and the general church teaching."

When it comes to divorce and remarriage, McElwee says, the pope doesn't directly change church law — which holds that couples who divorce and remarry without getting a Catholic annulment are committing adultery and cannot receive communion.

"But he kind of pivots the church stance, asking clergy to be much more pastoral and not always apply one general norm to all cases — but instead help people discern what God is doing in their lives, even if they might be living in a situation the church in past years might have called irregular," McElwee says.

No longer can the church simply say everyone in such an "irregular situation" is living in mortal sin, McElwee explains. Instead, each individual situation will need to be looked at separately.

"So, it's a very different stance, and it's allowing clergy to let people discern God's will, even in situations where that might be what, what he says, 'morally confusing,' " McElwee says.

Some in the Catholic Church wanted the pope to say it's OK for remarried people to take communion; others wanted "a very strong no," McElwee says.

"And what the pope has done really is seemed to embrace the middle path, looking for ambiguity, for individual situations."

Francis didn't describe any methods of contraception as "unlawful," as previous Catholic encyclicals have, The Associated Press notes.

Instead of characterizing contraception as a sin, Francis says the church must emphasize to young couples the joy of having children — while respecting the need for each couple to decide their family size on their own.

He cites the Relatio Finalis, written by bishops last year:

"In accord with the personal and fully human character of conjugal love, family planning fittingly takes place as the result a consensual dialogue between the spouses, respect for times and consideration of the dignity of the partner. ... Decisions involving responsible parenthood presupposes the formation of conscience."

As well as the Second Vatican Council:

"Let them thoughtfully take into account both their own welfare and that of their children, those already born and those which the future may bring. ... They should consult the interests of the family group, of temporal society and of the Church herself. The parents themselves and no one else should ultimately make this judgment in the sight of God."

"Francis made a single reference to the church-sanctioned family planning method of abstaining from sex during a woman's fertile time," the AP writes. "He said only that such practices are to be 'promoted' — not that other methods are forbidden — and he insisted on the need for children to receive sex education, albeit without focusing on 'safe sex.' "

On Sex, Homosexuality And Gender

Francis rejected the idea that sexual desire is a thing to be "eliminated" or looked down upon.

"God himself created sexuality, which is a marvelous gift to his creatures," he wrote.

He writes that sex and eroticism can be distorted — including when people instruct women to submit to their husbands, or sex becomes either selfish or purely self-sacrificing. But reciprocal and respectful sex, within the context of marriage, is a passion that reveals "the marvels of which the human heart is capable," Francis writes.

The pope also said that a "great variety" of family situations can offer stability, while emphasizing that same-sex marriage or unmarried committed relationships are not equal to marriage in the eyes of the Church.

The document references transgender people, saying that while there are "at times understandable aspirations" to ideologies that allow for a separation of gender and biological sex, they are attempting to "sunder what are inseparable aspects of reality."

The pope calls for women's rights to be advanced around the world and rejected the idea that feminism has hurt family structures. "The equal dignity of men and women makes us rejoice to see old forms of discrimination disappear," he wrote.

On Marriage, The Church And The World

On marriage in general, the pope writes that the Catholic Church needs "a healthy dose of self-criticism" for the way it has described and presented marriage to the public.

"[W]e often present marriage in such a way that its unitive meaning, its call to grow in love and its ideal of mutual assistance are overshadowed by an almost exclusive insistence on the duty of procreation ... At times we have also proposed a far too abstract and almost artificial theological ideal of marriage, far removed from the concrete situations and practical possibilities of real families. ...

"[W]e have often been on the defensive, wasting pastoral energy on denouncing a decadent world without being proactive in proposing ways of finding true happiness."

The pope also addressed a wide range of challenges that affect families, including: poverty; migration; children with special needs; elderly relatives who need care; drug use and alcoholism; domestic violence; and a lack of affordable housing; as well as social pressures and the difficulty of addressing marital problems.

"The Synod's reflections show us that there is no stereotype of the ideal family," he writes, "but rather a challenging mosaic made up of many different realities, with all their joys, hopes and problems. "