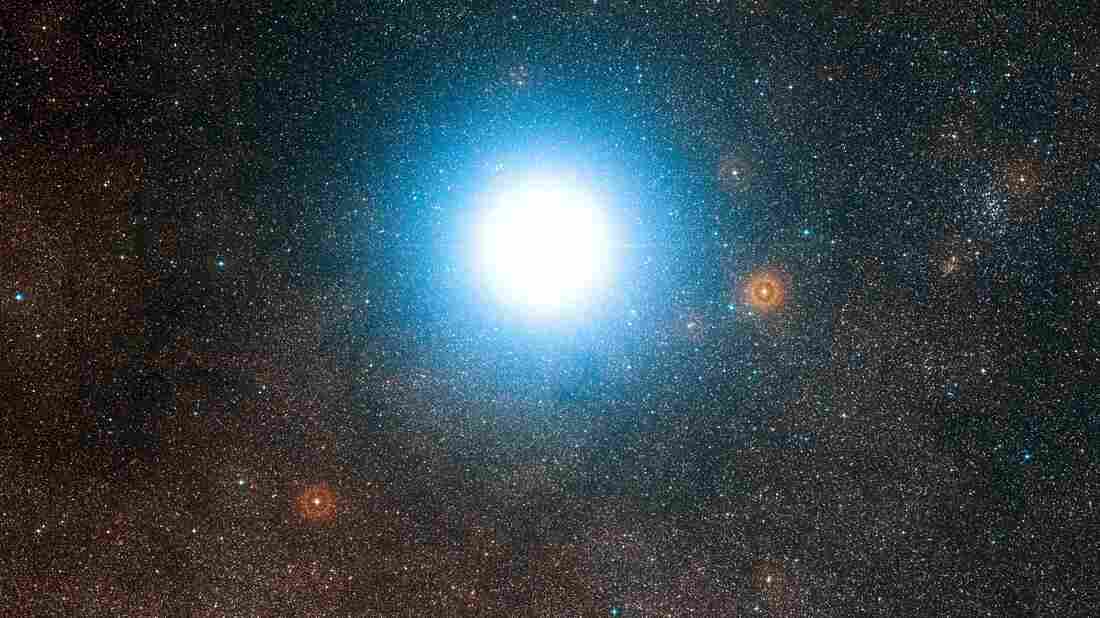 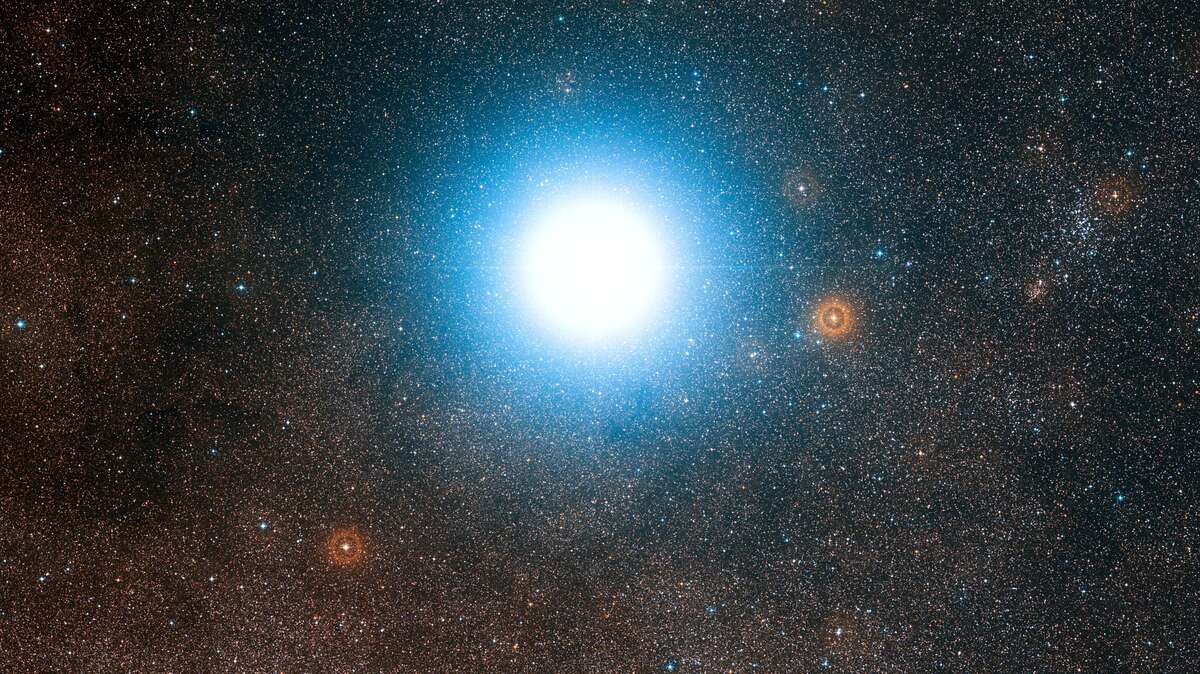 An image from the European Southern Observatory shows the sky around the bright star Alpha Centauri — which appears so large because of the telescope optics and photographic emulsion — taken from photos in the Digitized Sky Survey 2. Alpha Centauri is the closest star system to Earth's solar system.

Physicist Stephen Hawking and billionaire Yuri Milner have a vision of interstellar exploration — taking place over the course of not thousands of years, but decades.

Together with a team of scientists, they suggest that within a generation, humans could send a probe to Alpha Centauri — more than 4.3 light-years away, or 25 trillion miles — on a trip that would take just over two decades. That's 1,000 times faster than the current fastest spacecraft, the scientists say.

Instead of sending a car-size or piano-size probe, the "Breakthrough Starshot" team is proposing a postage-stamp-size spacecraft — a "starchip." The project, announced by Hawking and Milner on Tuesday, would engineer a method for such a nanocraft to be propelled through space by a sail, pushed by a powerful laser aimed from Earth.

The plan relies on Moore's Law — specifically, an observation that the number of transistors on a chip tends to double every couple of years, or in general, the belief that computing hardware improves at an exponential rate.

Computers that once would have filled a room fit on your palm; now, Milner and Hawking say, it's possible to imagine fitting cameras, a battery, navigation and communication equipment and even photon thrusters on a "gram-scale wafer" about the cost of a smartphone.

And if similar exponential improvements were seen in the fields of nanotechnology and laser technology, it would eventually be possible to push such a wafer to 20 percent of the speed of light, they say.

The plan depends on an incredibly thin, yard-wide sail that will be pushed by lasers. The chip is attached to the sail; the sail is hit by a carefully aimed laser to push it up to speed; two decades later, the chip and sail arrive at Alpha Centauri. Then the chip beams data back to Earth at the speed of light, giving scientists insight into another solar system just a quarter of a century after the mission was launched.

Instead of sending just one tiny spacecraft, the idea is to send hundreds or thousands — so many could be lost along the way, without the mission's being useless.

The Breakthrough Starshot project would support the research and development of a "proof of concept." It would be entirely in the public domain, Milner says, and cost about $100 million.

A full-fledged mission to Alpha Centauri, if it ever happened, would "require a budget comparable to the largest current scientific experiments," the team says. (For context, the budget for CERN, the international group that runs the Large Hadron Collider, is about $1.1 to $1.3 billion a year.) 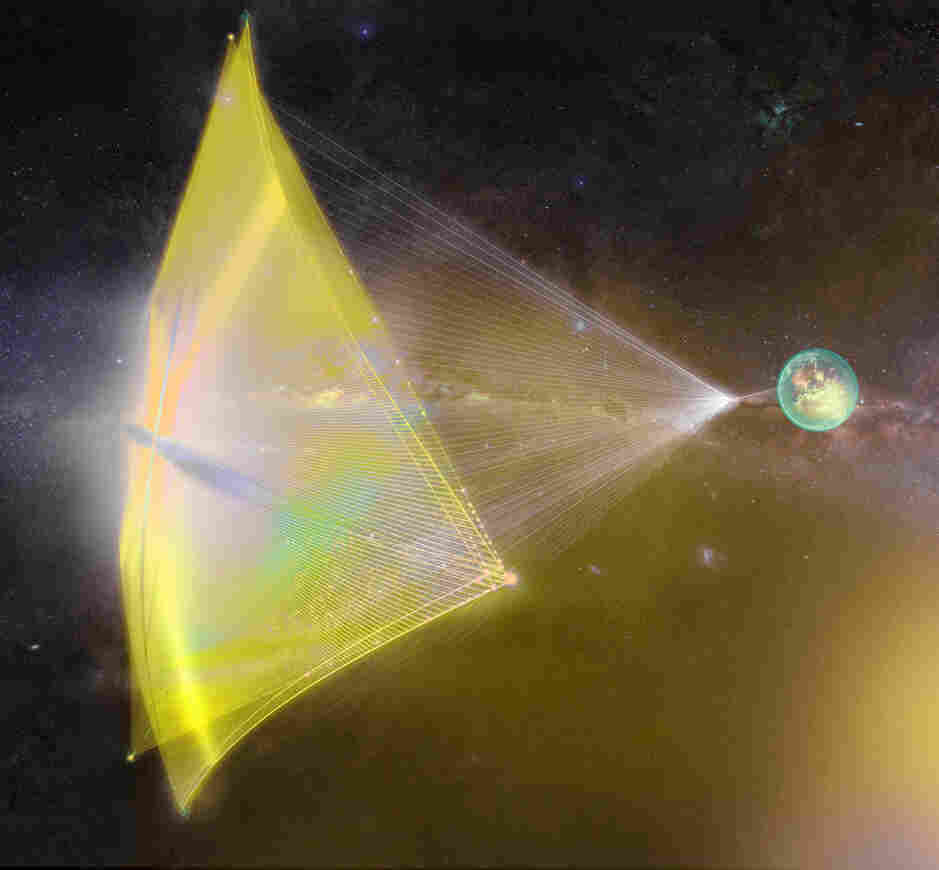 The "starchip" would be about the size of a postage stamp, Yuri Milner says, and the sail would be about a yard across. Breakthrough Initiatives hide caption 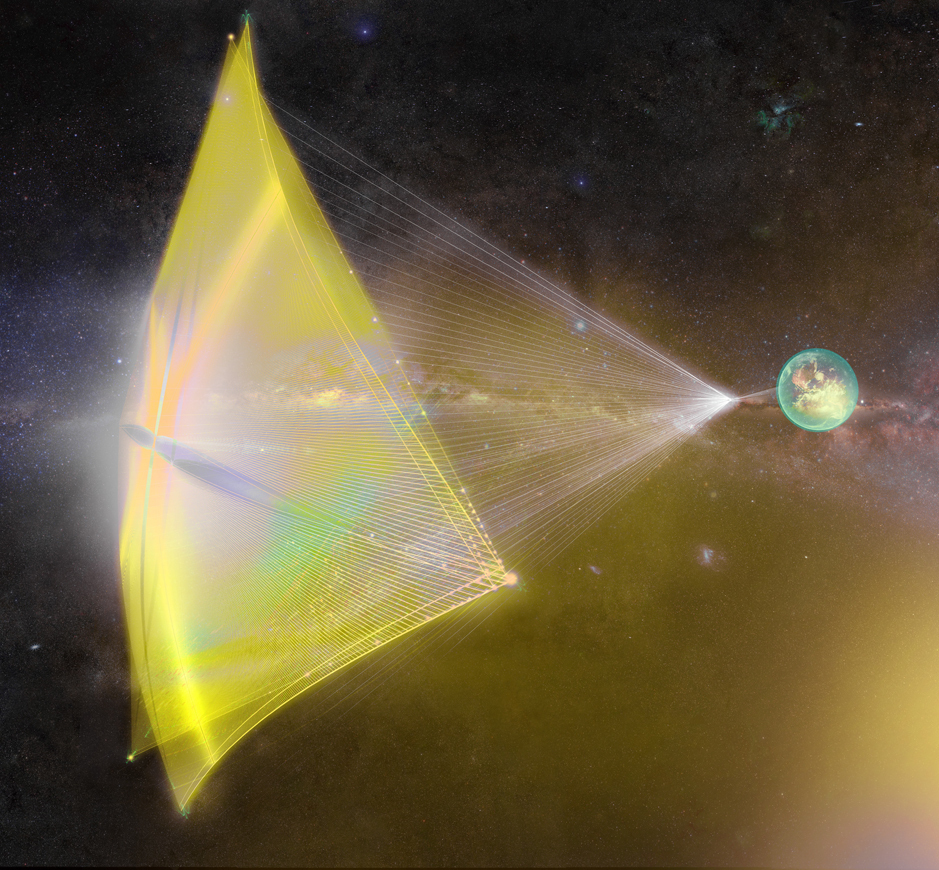 At the announcement of the project, Milner began by laying out the technological challenges of a trip to another star system.

He described it as the "Silicon Valley approach to spaceflight." He invited experts and members of the public to look at the long list of challenges — from space dust to properly aiming the laser — still to overcome.

Then Hawking took the stage and, in his iconic synthesized voice, got philosophical.

"What makes human beings unique? There are many theories. Some say it's language or tools; others say it's logic or reasoning. They obviously haven't met many humans," he joked.

"I believe what makes us unique is transcending our limits. Gravity pins us to the ground, but I just flew to America. I lost my voice, but I can still speak, thanks to my voice synthesizer. How do we transcend these limits? With our minds — and our machines.

"The limit that confronts us now is the great void between us and the stars. But now we can transcend it. With light beams, light sails and the lightest spacecraft ever built, we can launch a mission to Alpha Centauri within a generation."