Accessibility links
Why Critics Are Calling Syria's Parliamentary Elections A Sham : The Two-Way In government-held areas, citizens queued up to cast ballots Wednesday. The vote, which coincides with the start of peace talks in Geneva, is expected to usher in an assembly loyal to the president. 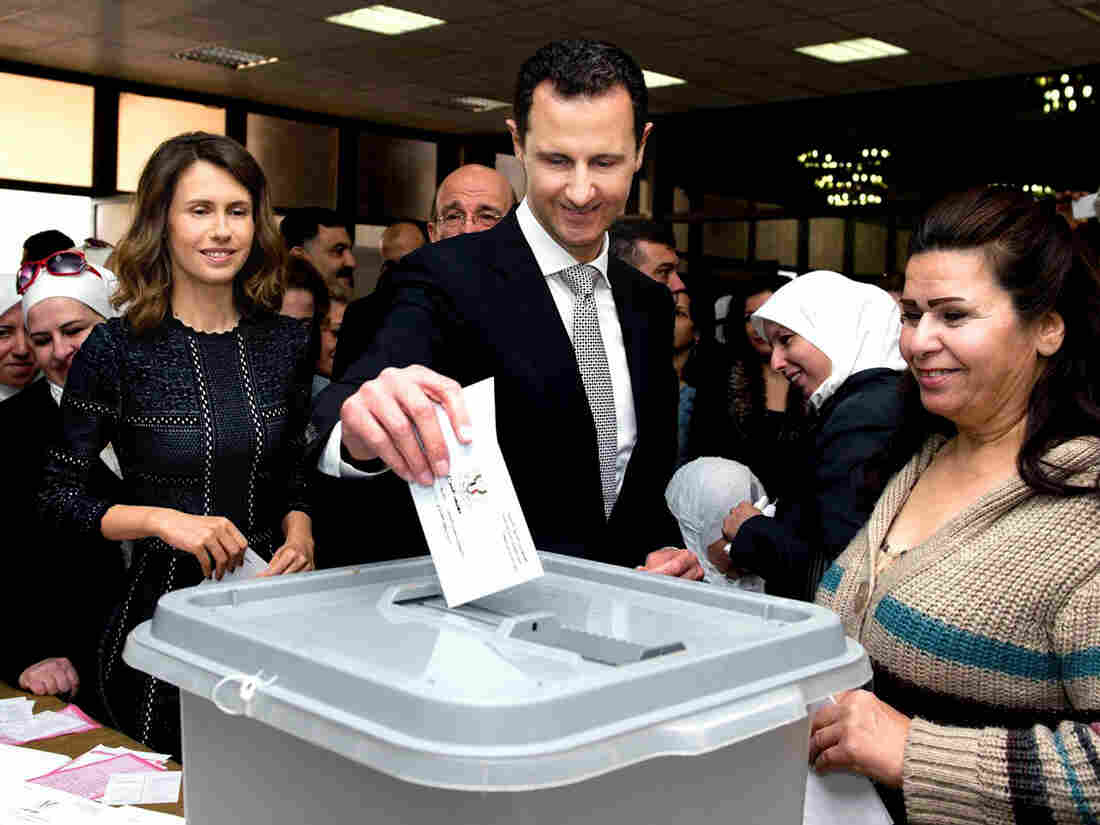 Syrian President Bashar Assad, flanked by his wife, Asma (left), casts his ballot in the parliamentary elections Wednesday in Damascus, Syria, in a photo released on the official Facebook page of Syrian presidency. AP hide caption 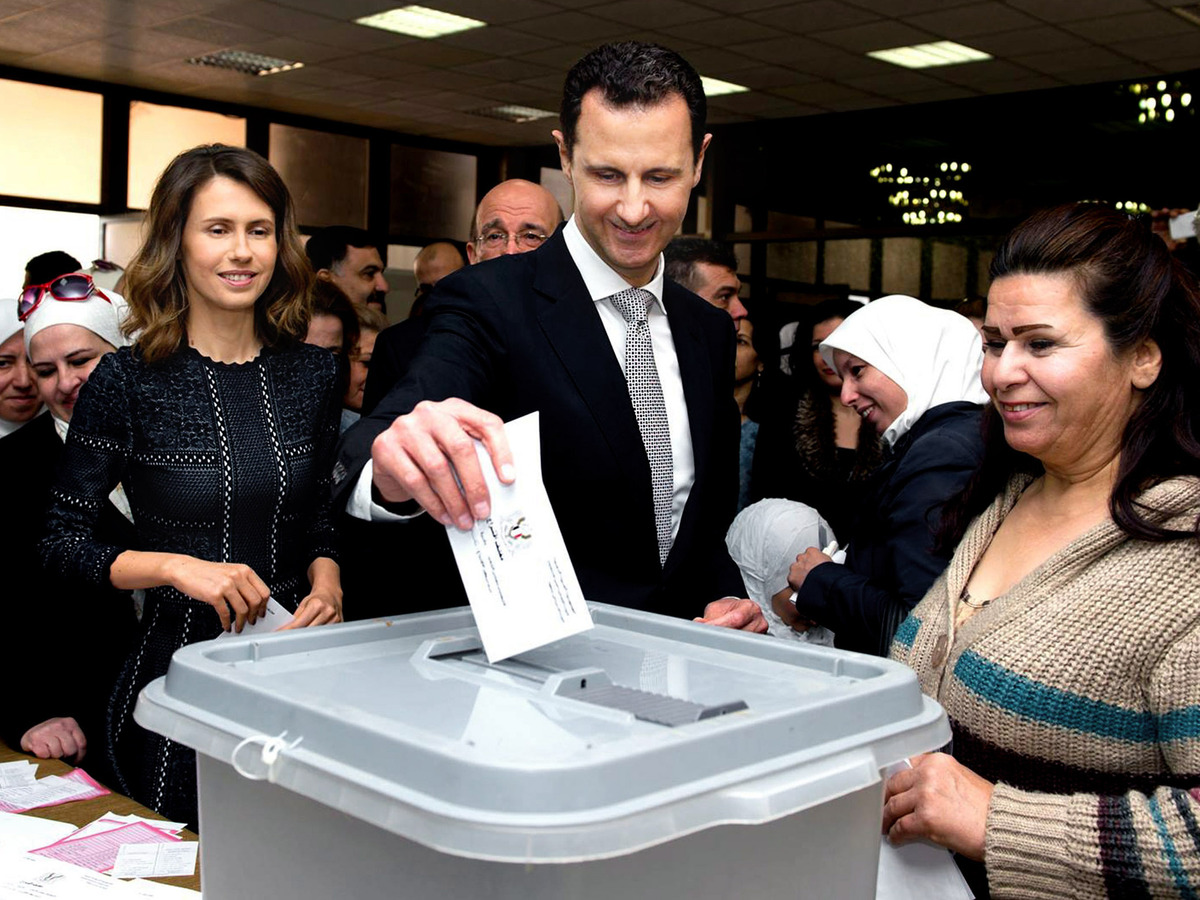 Syrian President Bashar Assad, flanked by his wife, Asma (left), casts his ballot in the parliamentary elections Wednesday in Damascus, Syria, in a photo released on the official Facebook page of Syrian presidency.

Syria's bloody civil war has been raging for six years. At least a quarter of a million people have been killed, and half the country is displaced. Major swaths of the county are held by ISIS or opposition fighters.

But in government-held areas, citizens queued up to cast ballots Wednesday for parliamentary elections, the second since the start of the war. Syrian state media carried photos from multiple provinces showing voters tucking their ballots into boxes and dipping their fingers into ink to show their participation.

NPR's Alison Meuse tells our Newscast unit that the vote is expected to usher in an assembly loyal to President Bashar Assad, while his opposition calls it a sham. She describes the situation around the country:

"Syrian state media show photos of President Assad and an elegantly dressed first lady voting at the Assad Library in Damascus. Thousands of voting booths are open in government-held areas of the country. But there will be no vote in rebel or ISIS-held zones. Kurdish-run cantons are boycotting, but state TV shows voting going ahead there.

"Even Syria's domestically tolerated opposition has rejected the poll, saying it hijacks U.N.-backed efforts toward political transition. They argue there can be no fair vote when millions are displaced and that the regime is trying to shore up its legitimacy for this week's round of peace talks in Geneva."

Those talks began Wednesday between the main opposition negotiating body and U.N. envoy Staffan de Mistura. "The government has said it will be ready to participate from Friday," Reuters reported.

The parliamentary elections involve more than 3,500 candidates who are vying for 250 seats in the People's Assembly, according to state media, which added that some polling centers were open to displaced voters from areas outside of state control.

But considering the raging war and the sheer number of displaced people, "to call this election flawed would be an understatement," CBS News said in a report from a Damascus polling station. "Obviously there are no ballot boxes like this in areas controlled by the opposition."

At the same time, CBS reported that the vote, "in the capital at least, has all the props and trappings of a genuine political contest; campaign posters in the streets, indelible blue ink-stained fingers to mark those who have participated, and ballot boxes."

CBS added: "The ballots themselves, however, are just unnumbered slips of paper, and no one expects this show to have a surprise ending."

Speaking to reporters at a polling station, Assad equated voting to standing up against terror. He said "terrorism managed to shed innocent blood and destroy much infrastructure, but it failed in achieving the primary goal it was assigned, which is destroying the principle structure in Syria, meaning the social structure of the national identity," according to state media.

The elections have been widely criticized by foreign governments. Mark Toner, U.S. State Department deputy spokesperson, said this week that "to hold parliamentary elections now given the current circumstances, given the current conditions in the country, we believe is at best premature and not representative of the Syrian people."

A French Foreign Ministry spokesman called the elections a "sham," while his German counterpart said that country "will not accept the results," Reuters reported. At the same time, Russian Foreign Minister Sergey Lavrov said the elections are needed to prevent a "vacuum of power," the news service adds. Russia supports the Assad government.

Opposition figures are unequivocal in their criticism of these polls. "These elections do not mean anything," Asaad al-Zoubi, chief negotiator for the main opposition body told Reuters. "They are illegitimate — theatre for the sake of procrastination, theatre through which the regime is trying to give itself a little legitimacy."