Accessibility links
Kobe Bryant Retires From Basketball : The Two-Way After 20 years in the NBA, the point guard played his last game Wednesday night. He scored a season-high 60 points in the final game. 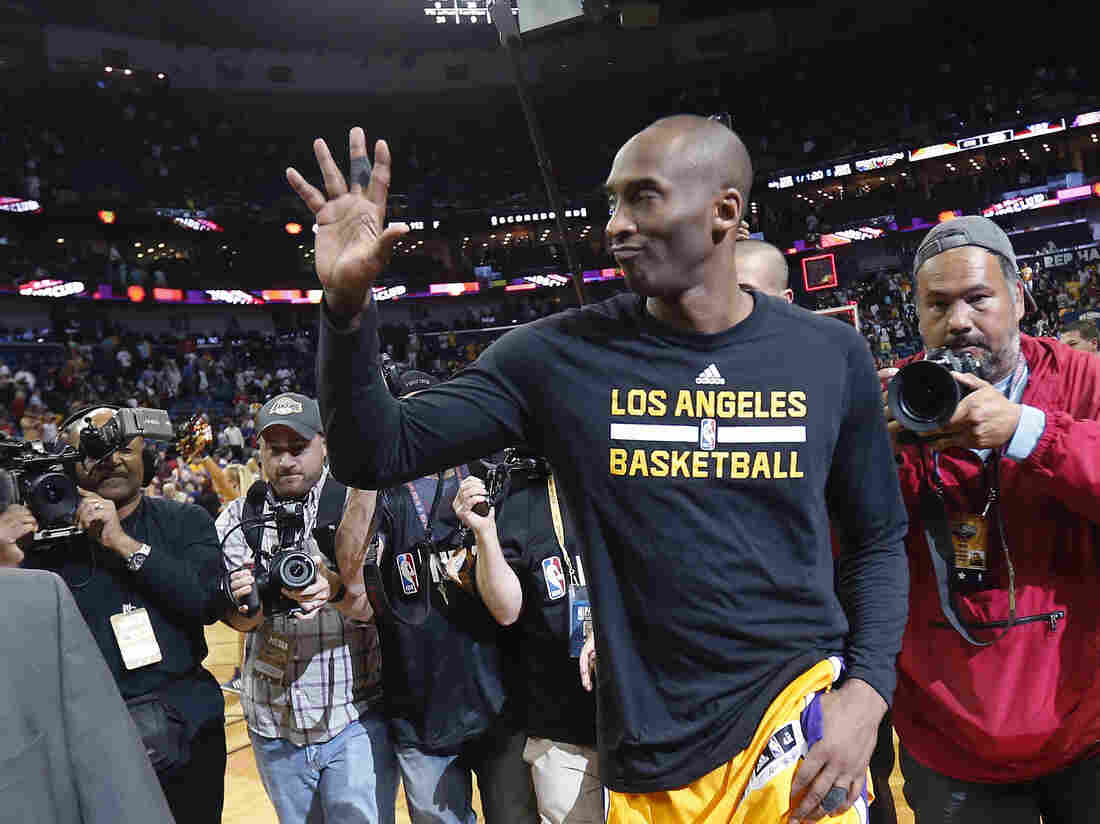 Los Angeles Lakers forward Kobe Bryant waves as he leaves the court after a game against the New Orleans Pelicans in New Orleans on April 8. Gerald Herbert/AP hide caption 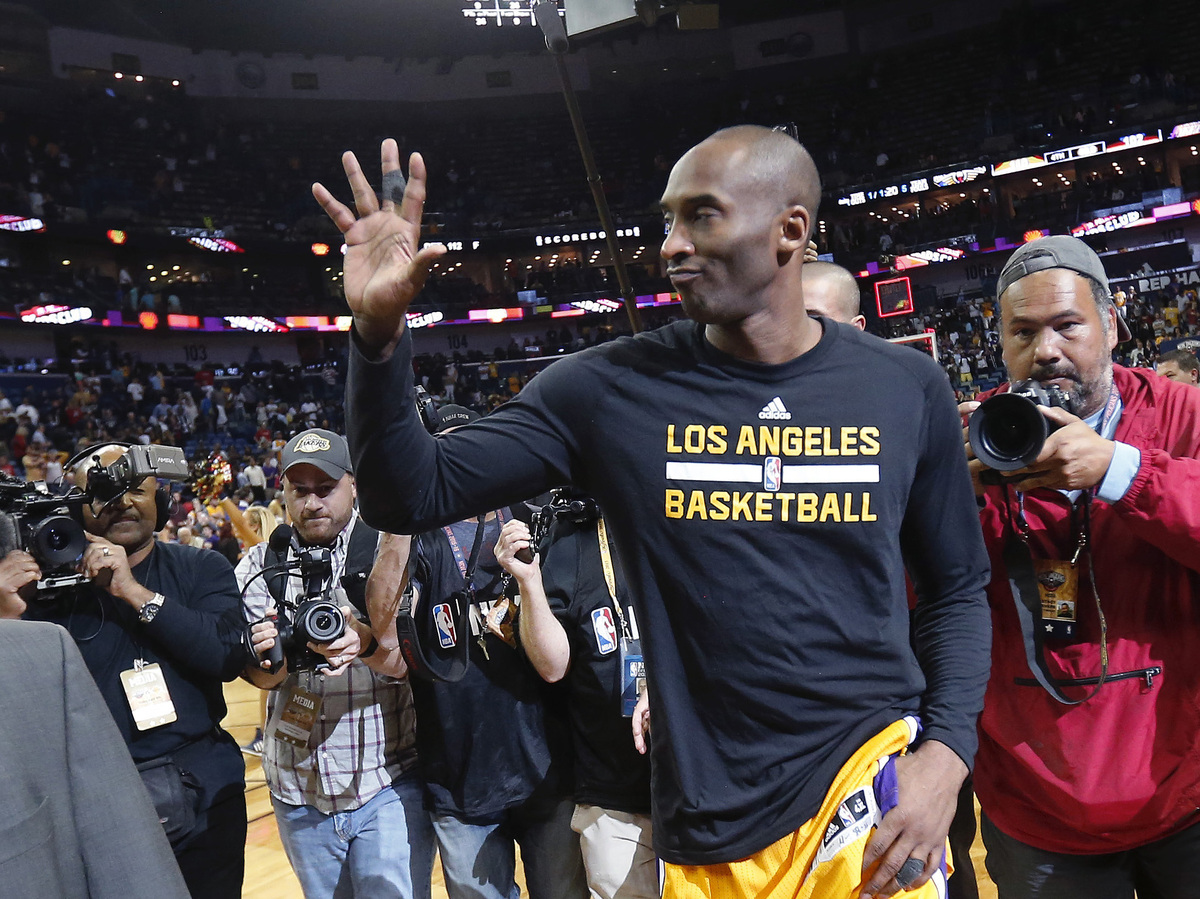 Los Angeles Lakers forward Kobe Bryant waves as he leaves the court after a game against the New Orleans Pelicans in New Orleans on April 8.

It was a storybook finish, the sixth 60-point game of his career. It also was the most shots taken by anyone in an NBA game in the last 30 seasons, according to STATS. Bryant checked out with 4.1 seconds left, serenaded by "Kobe! Kobe! Kobe!" chants. He retires as the NBA's No. 3 all-time scorer and won five championships. No one in NBA history ever scored more points in his last game.

Kobe Bryant's Life And Career By The Numbers

When Los Angeles Lakers' forward Kobe Bryant, 37, takes the court against the Utah Jazz in front of a home crowd on Wednesday night, it will be the final farewell in a season full of farewells.

Kobe's last game against the Thunder.

To honor Bryant's career, the Lakers have gone all out, inviting his former teammates to the Staples Center, erecting giant screens outside the arena bearing his image, and bringing in Red Hot Chili Peppers bassist Flea to play the national anthem, according to the Los Angeles Times.

"The game is going to be a 'zircus' — a zoo and a circus," said Lakers publicist John Black, according to newspaper.

Courtside tickets for the game have sold for as high as $27,500, compared with $1,000 to $2,000 for a typical game, ABC News reports, and hordes of media will be on hand. The much-hyped event even spawned it's own Twitter hashtag, #MambaDay, after Bryant's nickname, the "Black Mamba."

Though the Lakers have gone 16-65 in a miserable season that's landed them dead last in the Western conference, and though Bryant himself has struggled mightily to make his ailing body obey his competitive spirit, the focus of tonight's game will be on the past, not the present.

Here's a look back at his life and career by the numbers.

17 - The age Bryant was drafted into NBA

Taken 13th overall by the Charlotte Hornets in the 1996 draft, Bryant was then traded to the Lakers for center Vlade Divac. Here's the video of his draft night: 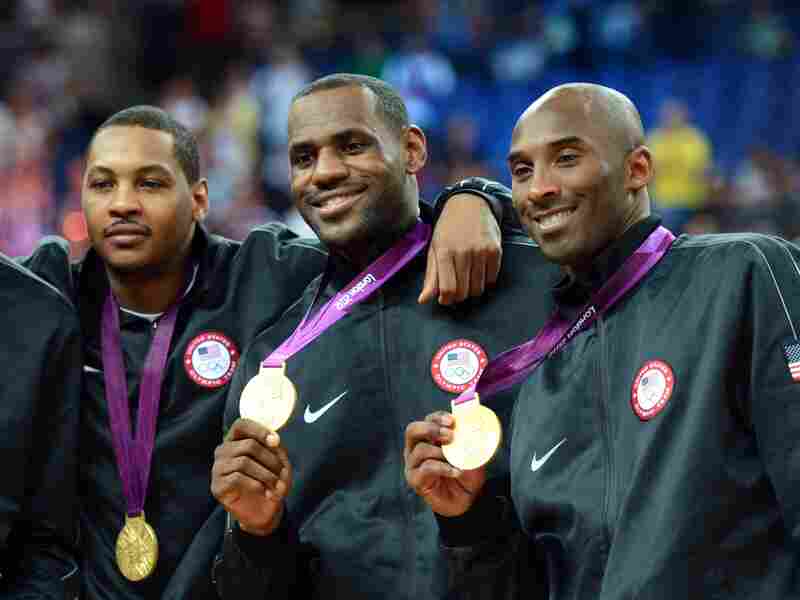 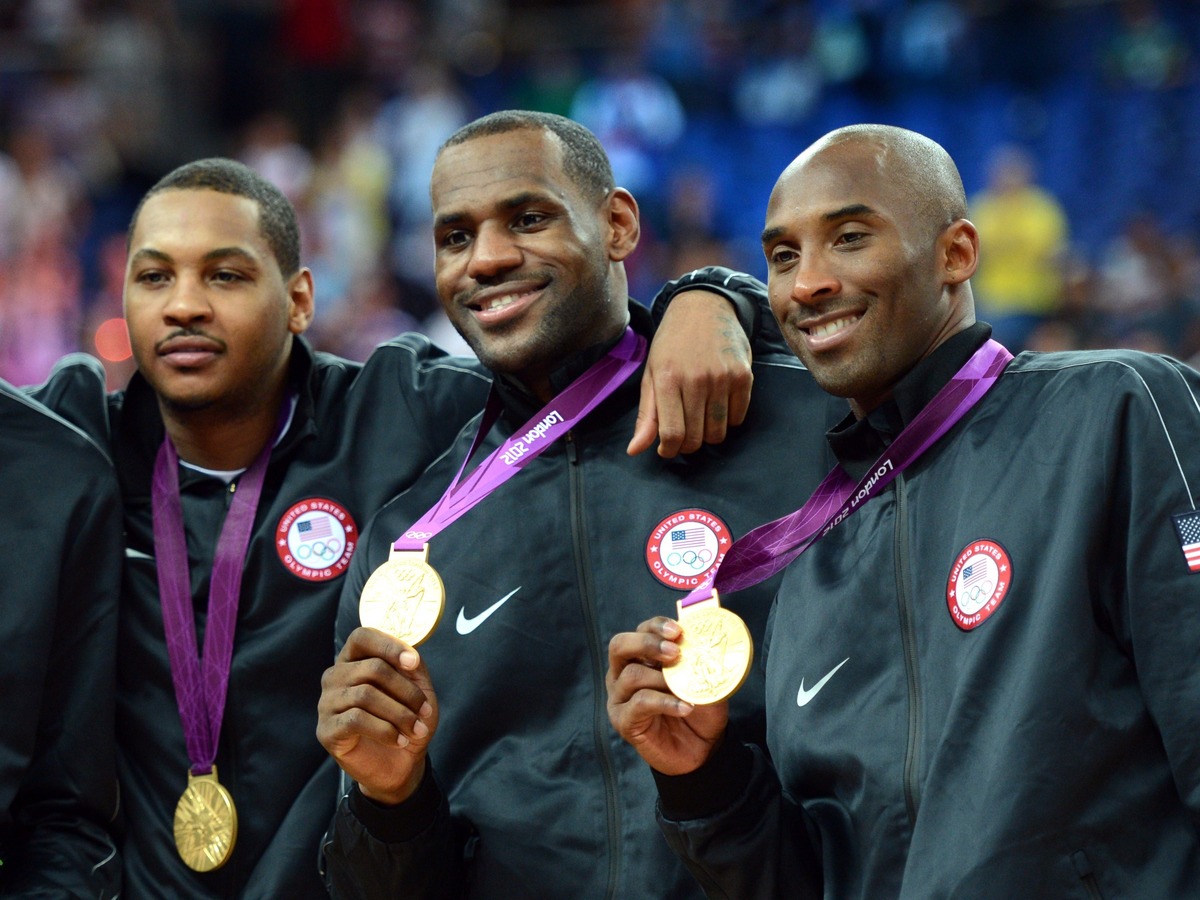 Bryant (right) celebrates with Lebron James (center) and Carmelo Anthony after winning the men's basketball gold medal at the 2012 Summer Olympics in London.

Bryant and his wife, Vanessa, have two daughters, Natalia, 13, and Gianna Maria-Onore Bryant, 9.

Bryant has been on five U.S. national basketball teams, helping lead them to gold medals in the 2008 and 2012 Olympics. 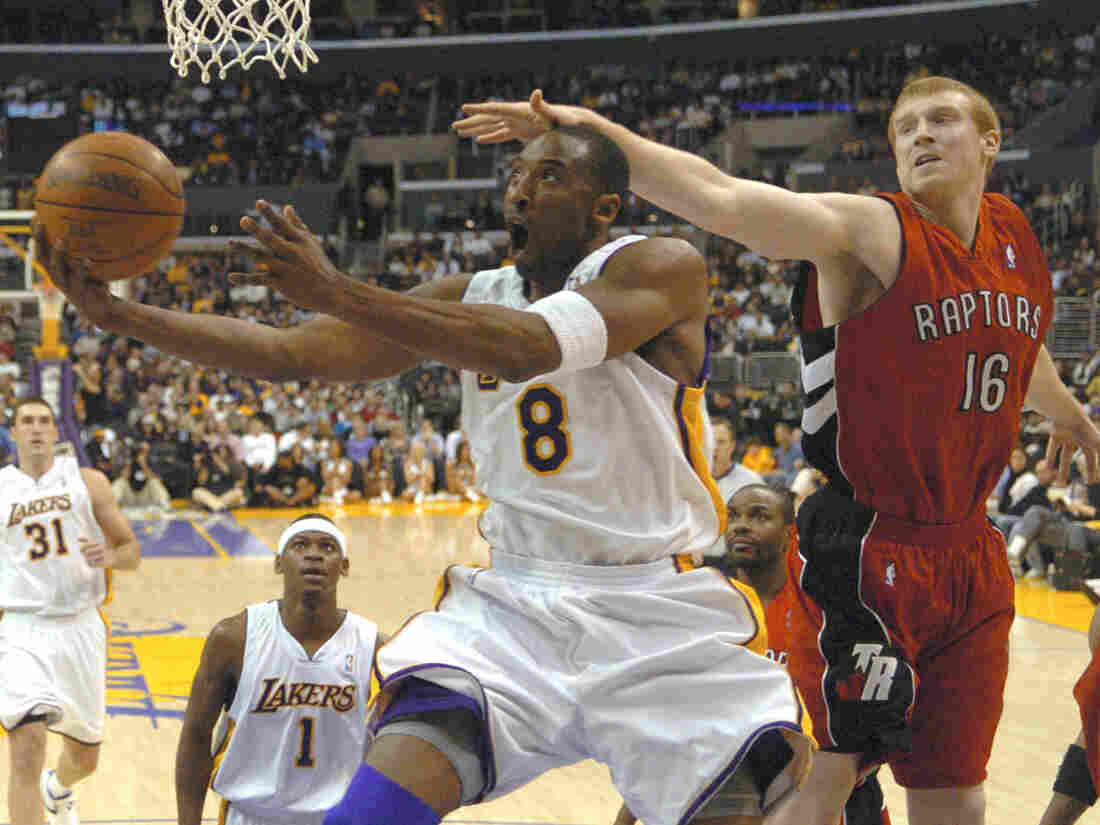 On Jan. 22, 2006, Los Angeles Lakers' Kobe Bryant scored 81 points against the Toronto Raptors. Wilt Chamberlain, who scored 100 points in a 1962 game, is the only player with more points in a single game. Matt A. Brown/AP hide caption 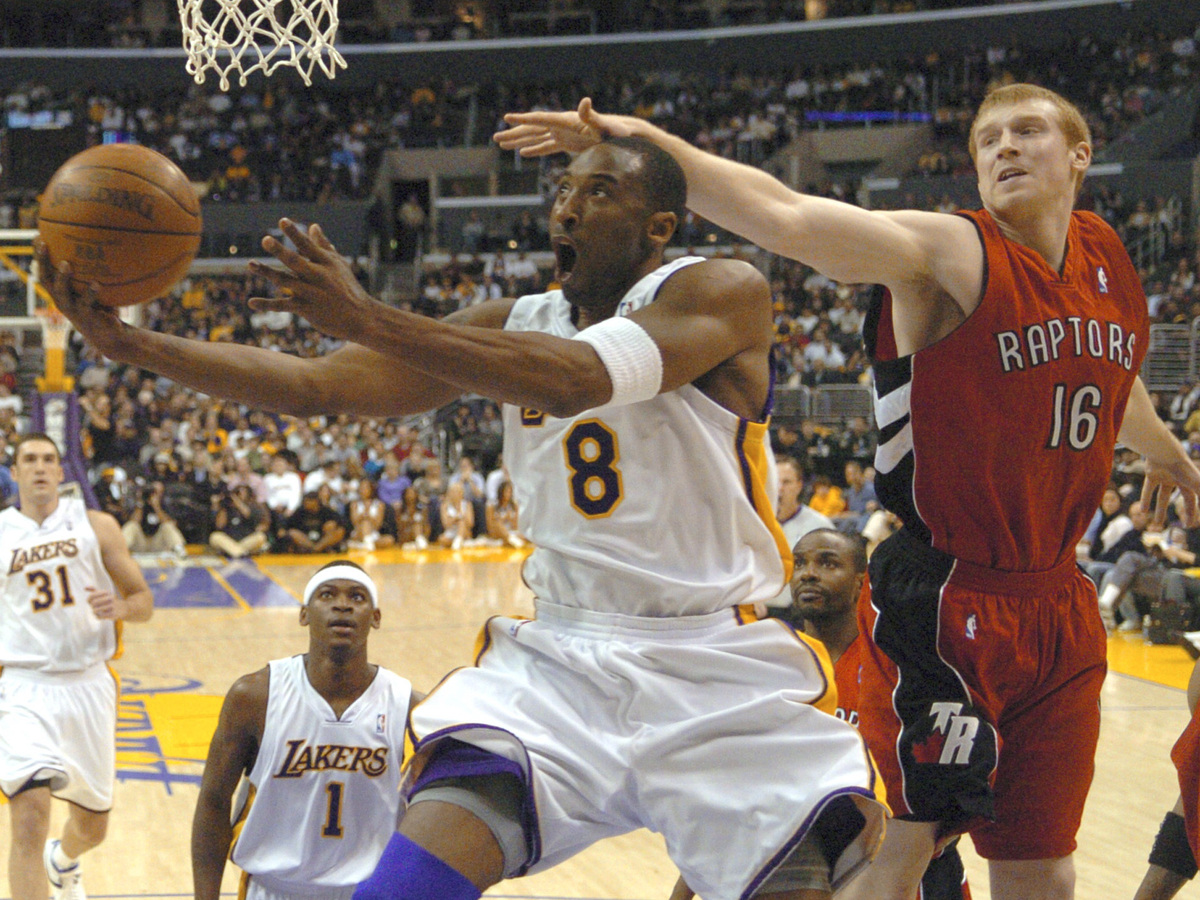 On Jan. 22, 2006, Los Angeles Lakers' Kobe Bryant scored 81 points against the Toronto Raptors. Wilt Chamberlain, who scored 100 points in a 1962 game, is the only player with more points in a single game.

When Bryant announced his retirement in November 2015, it wasn't a shock. The 37-year-old tore his Achilles tendon at the end of the 2013 season and spent much of the next season recovering. When he came back, he injured his knee and then tore his rotator cuff, which required surgery. While the announcement, wasn't unexpected, the form in which he delivered it certainly was. He wrote a poem, called "Dear Basketball" in the Players' Tribune website, which begins like this:

From the moment
I started rolling my dad's tube socks
And shooting imaginary
Game-winning shots
In the Great Western Forum
I knew one thing was real:

I fell in love with you."

In 2014, Bryant surpassed Michael Jordan for third on the all-time scoring list. He ranks behind Kareem Abdul-Jabbar (38,387) and Karl Malone (36,928). In 2005-06, Bryant dropped 81 points against the Toronto Raptors, the second most points scored in a single NBA game behind Wilt Chamberlain's 100-point game in 1962.

In 2003, a 19-year-old woman accused Bryant of raping her and he was charged with sexual assault and false imprisonment. The criminal charges were later dropped because the accuser, who faced intense scrutiny in the press, said she would not testify in court. Bryant settled a civil suit with the woman for an undisclosed amount and issued a public apology as part of the deal. His statement read, in part, "Although I truly believe this encounter between us was consensual, I recognize now that she did not and does not view this incident the same way I did."

This is the Cliffs-notes version of the story. For a thorough recounting of the accusations, fallout and litigation, read The Daily Beast's recent story called "Kobe Bryant's Black Mark."