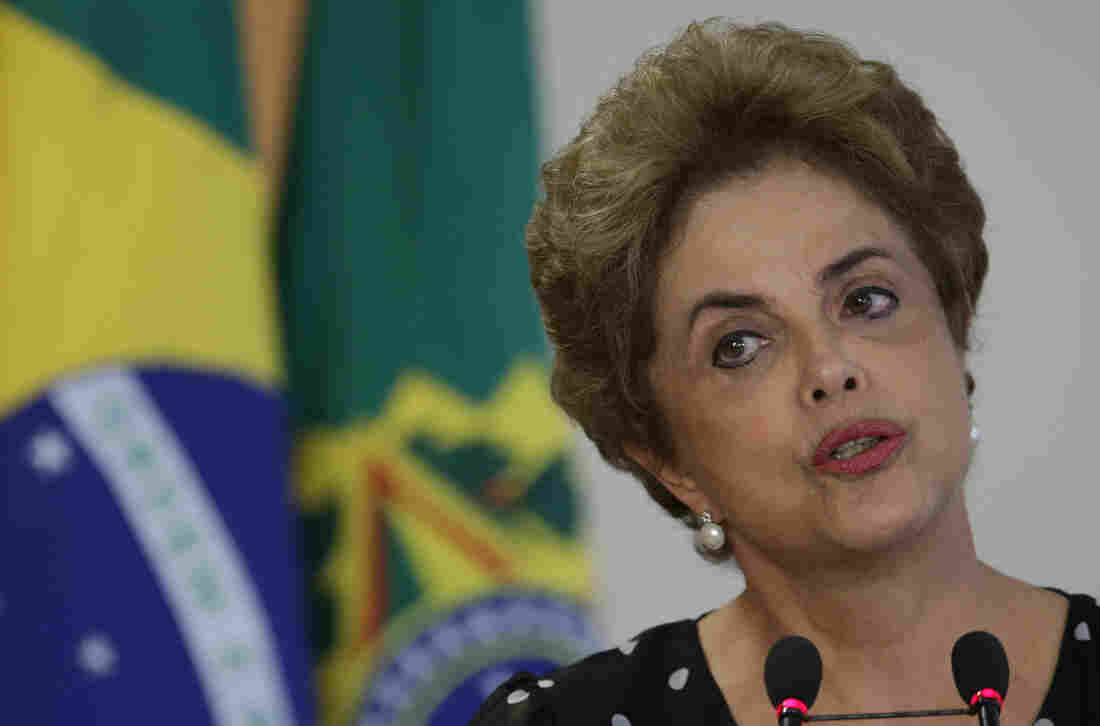 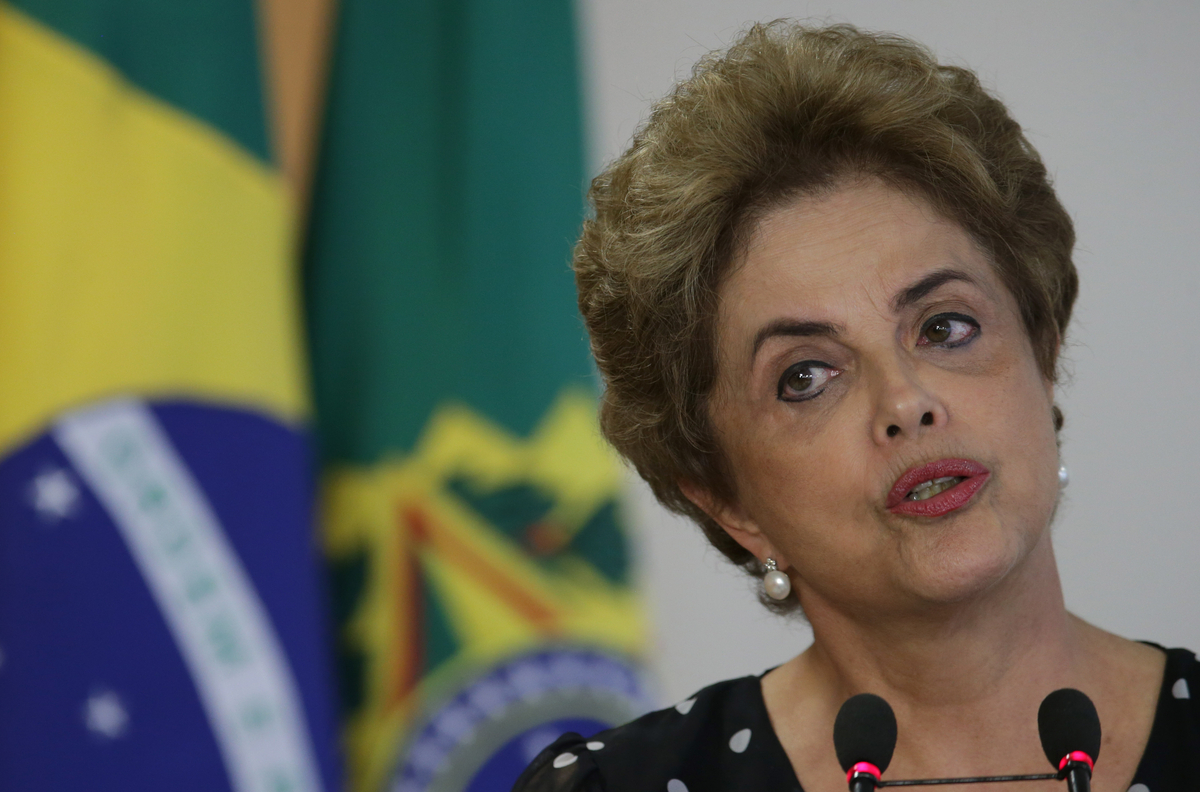 Brazil's lower house of parliament is set to vote on Sunday in impeachment proceedings against embattled President Dilma Rousseff.

This is the next step in a process that has sharply divided the country, which has seen massive demonstrations for and against Rousseff.

Here's what we know about the political crisis and how it escalated.

Rousseff, a former guerilla, is charged with tampering with the state budget. As NPR's Lourdes Garcia-Navarro explains, "She's accused of juggling federal accounts to make the economy seem better than it was before her re-election in 2014."

The case is viewed as "insubstantial" by many legal analysts, Lourdes adds.

Some members of a congressional committee discussing the case also claimed that Rousseff "was involved in a corruption scheme at state oil company Petrobras," reporter Catherine Osborn told our Newscast unit, though these accusations are not part of the impeachment charges.

Rousseff has repeatedly denied any wrongdoing. Osborn reports that "the president released a video address online Friday night saying that she was innocent of crimes, unlike the main actors trying to take her down."

As The New York Times reports, "some of the most vocal lawmakers pushing to impeach Ms. Rousseff are facing serious charges of graft, electoral fraud and human rights abuses, uncorking a national debate about hypocrisy among Brazil's leaders."

The lower house, called the Chamber of Deputies, is scheduled to vote on Sunday. If two-thirds of its members support impeachment, the process would then move to Brazil's upper house, the Senate.

A simple majority is needed in the Senate to suspend Rousseff from office. Vice President Michel Temer would take over the duties of president for up to 180 days.

Then, the Senate would vote to decide whether to try her, and that poll also requires a simple majority.

And while Rousseff's political rivals are "pressing for a speedy Senate vote on whether to hold a trial, in the hope of ensuring a smooth transition to a Temer administration," the Senate's speaker Renan Calheiros tells The Economist that "a vote may not happen until May 15th."

In order to permanently remove Rousseff from office, the BBC reports, "two-thirds of the Senate would have to vote in favour. Mr Temer would remain president for an interim period should this happen."

At the same time, there's considerable anger at the political establishment in general — not just with Rousseff.

If she is impeached, there are big questions about what would happen next. Lourdes reports that Temer is under investigation, as is the speaker of the house, who would be next in line.

Lourdes adds: "In fact, the political class has been so tainted by the corruption scandal that is not clear who will have credibility to lead Brazil out of what is a desperate situation."

Rousseff's supporters characterize the push toward impeachment as a coup attempt.

The Associated Press adds that her supporters claim that "Brazil's traditional ruling class has been unnerved by the social movement under Rousseff's Worker's Party over more than a decade in power and is seizing the opportunity to take back power."

On the other hand, Lourdes says, the opposition accuses her of ruining the economy.

They brush off the accusations that push toward impeachment is an attempt at a coup, the AP says, "because it's allowed in the constitution."

One of Rousseff's most important allies is her predecessor Luiz Inacio Lula da Silva, known as Lula. A scandal last month involving Lula fueled this push toward impeachment, as Lourdes reported at the time:

"The country was sent into shock when [Lula] was detained and questioned over allegations that he was involved in a massive corruption scandal involving the state oil company. ...Rousseff, who is facing her own troubles, offered him a place in her cabinet, and that kicked off a whole world of trouble. You know, many people saw the appointment as a way to shield Lula ... from prosecution. Immediately there were tons of legal challenges and now the Supreme Court has ruled that he cannot take office."

In the wake of that scandal, Rousseff and her Worker's Party (known as PT) lost several of their most important allies in the government, making impeachment more likely.

Those include Temer's Party of the Brazilian Democratic Movement, which was their main ally, The Economist reports. The magazine adds: "This week three other centrist parties spurned offers of plush ministerial posts and defected from her governing coalition."

A majority of Brazilians want to see Rousseff impeached, according to recent polling data.

In a survey conducted this month by Datafolha, 61 percent of respondents said they supported removing Rousseff from office. Three weeks prior, that figure was at 68 percent, according to The New York Times.

These polls have served to embolden her opposition, Lourdes reports.

The dwindling support for this president, who once enjoyed widespread popularity, is likely driven by the dismal state of the economy. As Lourdes reports, "Brazil's economy is in the worst recession in generations." Dilma's PT provided food and money to poor families, especially in the north of the country. Now, Lourdes says, those programs are being scaled back.

Thiago de Aragao, a political analyst with Arko Consulting, tells Lourdes that "the political turmoil and the effort to impeach Rousseff is being driven by the miserable state of the economy."

He adds: "We have a society in which corruption is highly acceptable by the society as long as the economy flows in a positive manner."

The shift in public opinion was also tied to her campaign promises. The London Review of Books reports that she emphasized social protection during her reelection campaign. But after the votes were cast, she prioritized austerity instead. Here's more from the LRB:

"[T]he meltdown of Dilma's popularity was not just the predictable result of the impact of recession on ordinary living standards. It was also, more painfully, the price of her abdication from the promises on which she was elected. Overwhelmingly, the reaction among her voters was that her victory was an estelionato, an embezzlement: she'd cheated her supporters by stealing the clothes of her opponents. Not just disillusion, but anger followed."

We'll keep you updated on the impeachment proceedings.