Accessibility links
A Pastafarian Wedding: New Zealand Couple Get Wed In Holy Macaroni : The Two-Way Flying Spaghetti Monster be praised! The ceremony was led by a "ministeroni," and the couple in full pirate regalia exchanged "rigatoni." For dinner? That's right: The New Zealand newlyweds ate pasta.

Holy Macaroni: Welcome To The First Ever Official Pastafarian Wedding

Holy Macaroni: Welcome To The First Ever Official Pastafarian Wedding 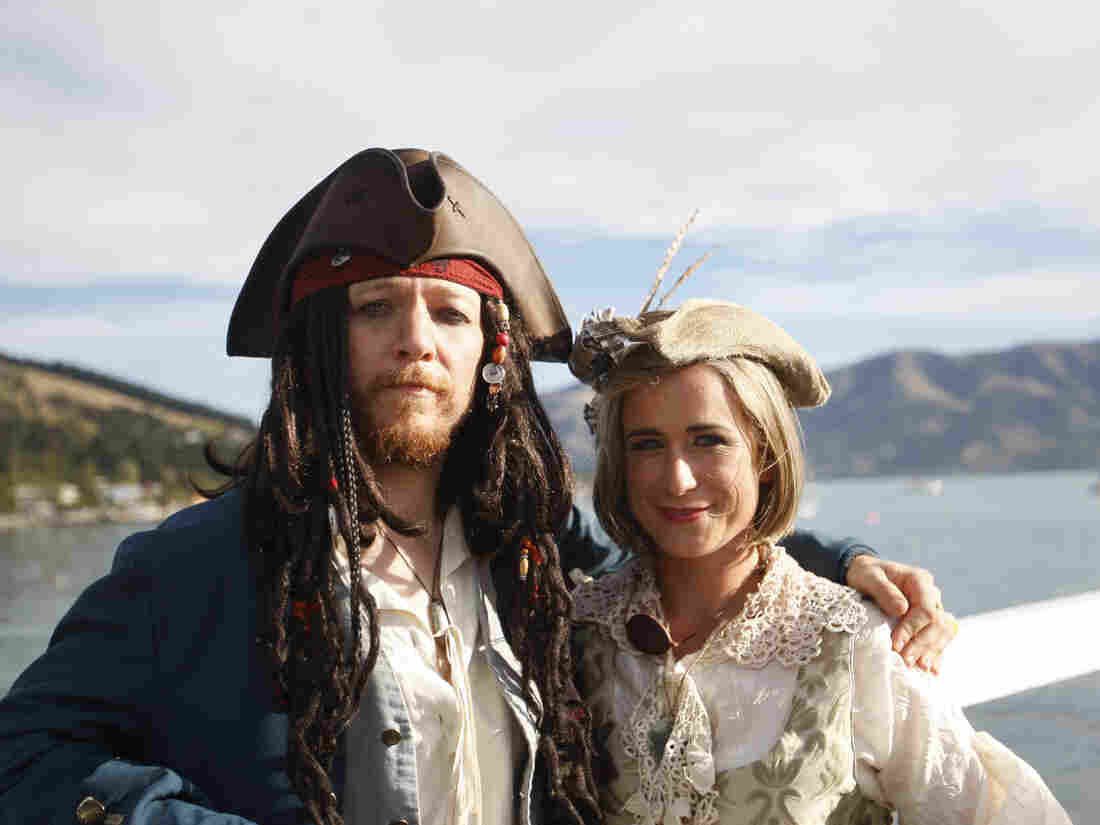 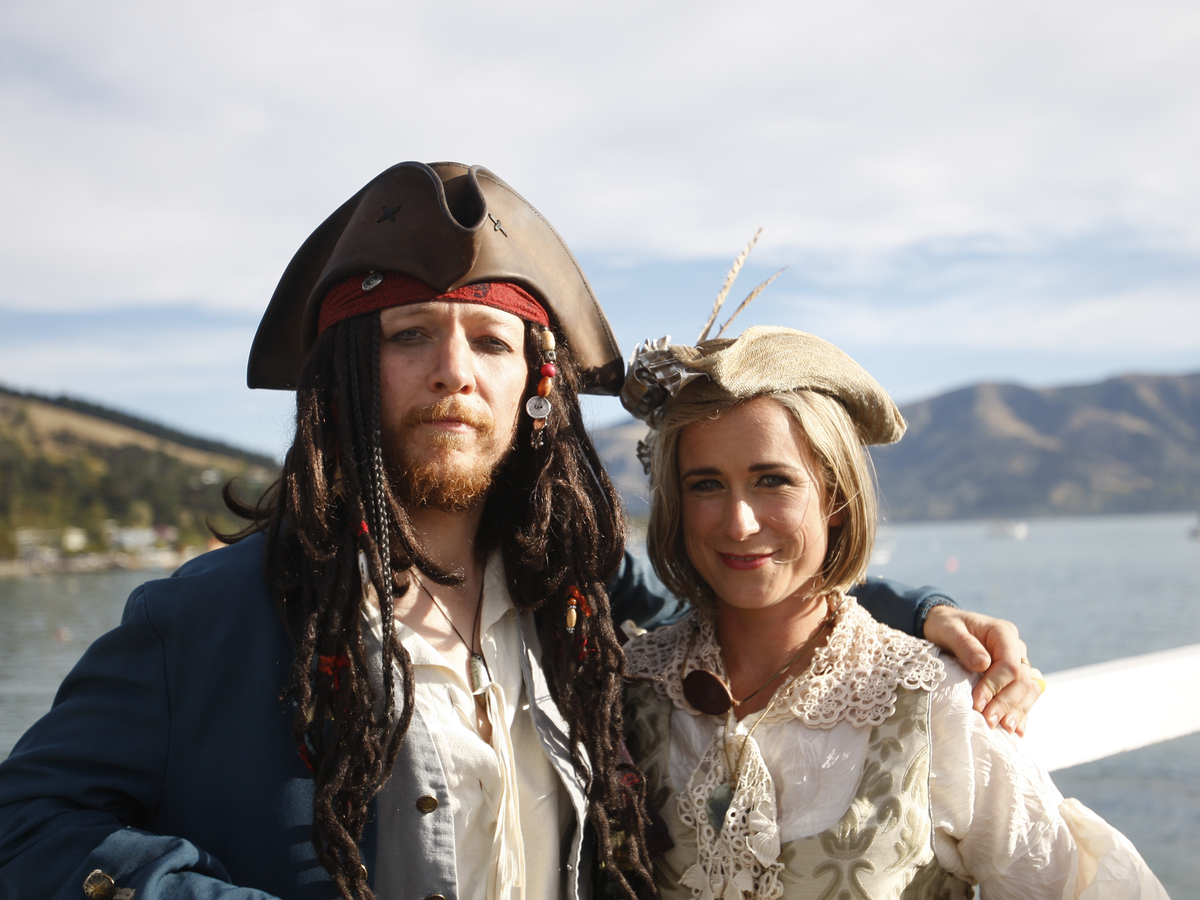 The scene: a wedding on a pirate-style ship in New Zealand's Akaroa Harbour.

The rings: known here as rigatoni, and made of pasta.

The wedding feast: pasta. Only pasta. (OK, there was some cake, too.)

Welcome to the first official wedding of the Church of the Flying Spaghetti Monster, according to The Associated Press. The group was inspired by a 2005 satirical letter calling for greater separation of church and state. 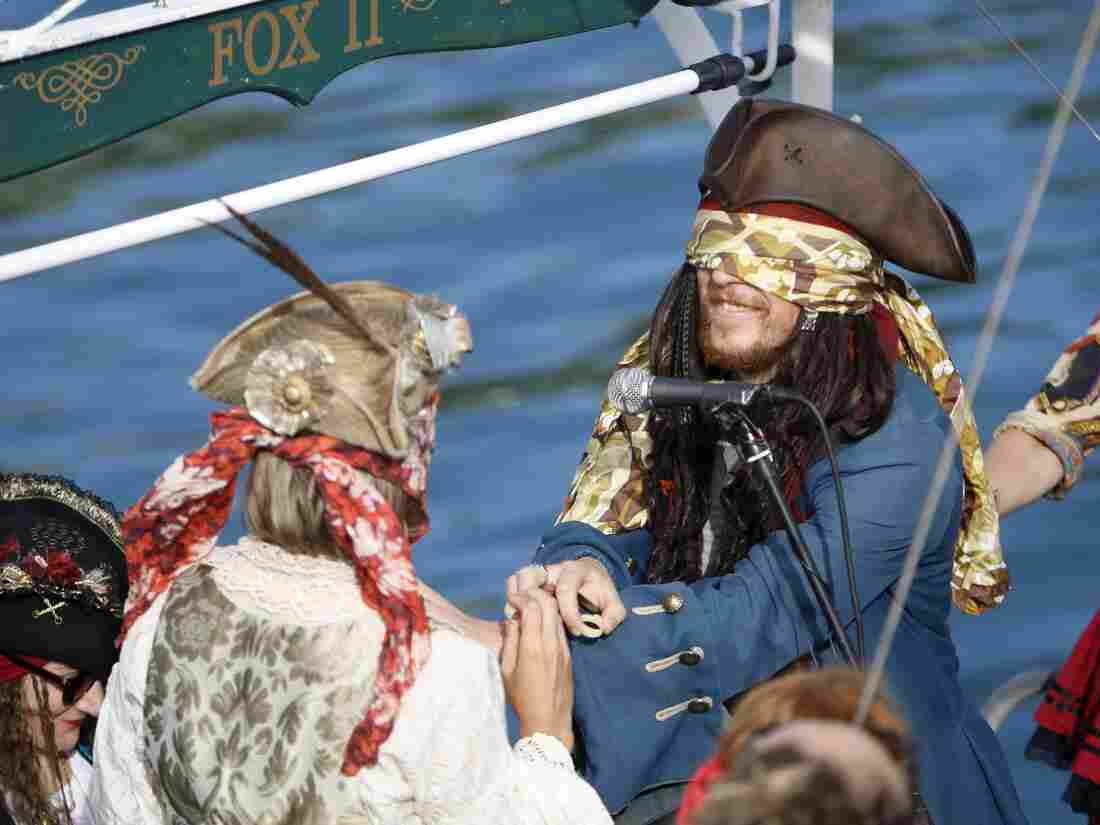 Fenn and Ricketts hold rings made of pasta during their marriage ceremony Saturday on a boat in Akaroa Harbour, New Zealand. Nick Perry/AP hide caption 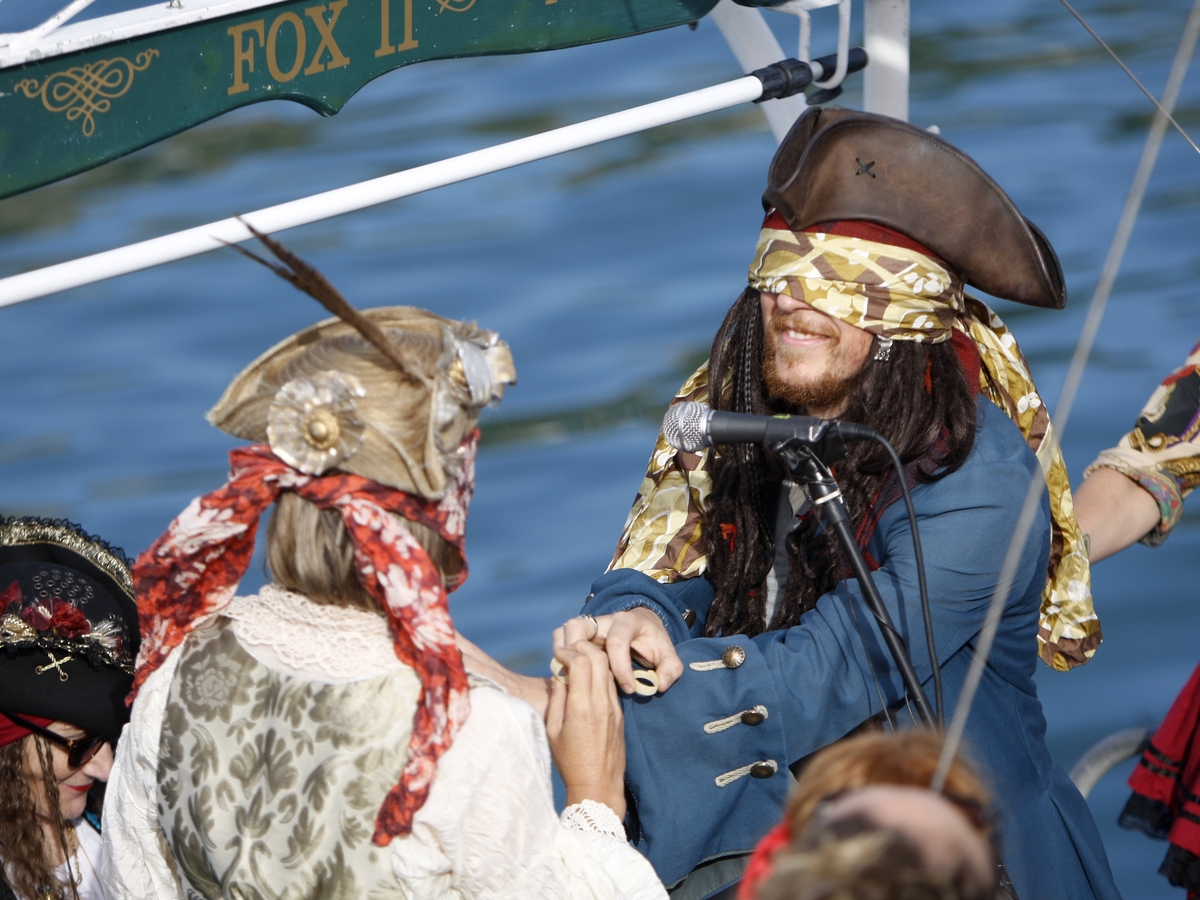 Fenn and Ricketts hold rings made of pasta during their marriage ceremony Saturday on a boat in Akaroa Harbour, New Zealand.

"When it came time for the kiss, the bride and groom slurped up either end of a noodle until their lips met," the AP reported.

As for the vows? "The groom, Toby Ricketts, vowed to always add salt before boiling his pasta, while bride Marianna Fenn donned a colander on her head."

During the service, Martyn, the ministeroni, explained some of the core beliefs of Pastafarians. "The Flying Spaghetti Monster created the world. We know that," she said, according to the AP. "We weren't around then and we didn't see it, but no other religion was around to see it either, and our deity is as plausible as any other."

Fenn, the bride, told the wire service: "I would never have agreed to a conventional marriage, but the idea of this was too good to pass up." We note that her last name was reported as Young, not Fenn, by one local publication that interviewed her.

You might remember that the Church of the Flying Spaghetti Monster started as a demonstration against teaching intelligent design in Kansas schools in 2005. Bobby Henderson wrote to the Kansas State Board of Education, saying that according to his religion, a "Flying Spaghetti Monster created the universe" — and this alternative theory should be taught in schools, he added:

"It is absolutely imperative that they realize that observable evidence is at the discretion of a Flying Spaghetti Monster. Furthermore, it is disrespectful to teach our beliefs without wearing His chosen outfit, which of course is full pirate regalia. I cannot stress the importance of this enough, and unfortunately cannot describe in detail why this must be done as I fear this letter is already becoming too long. The concise explanation is that He becomes angry if we don't."

The letter quickly went viral, drawing supporters around the world who want to see greater separation between church and state. (As we reported, those include one Austrian who was eventually allowed to have his driver's license photo with a pasta strainer on his head.)

The church's New Zealand branch says it is "formed by people tired of being disenfranchised for thinking rationally."

Last December, New Zealand's Church of the Flying Spaghetti Monster was recognized by officials as "suitable to officiate weddings," and Martyn was the first celebrant to receive approval, The New Zealand Herald reported. 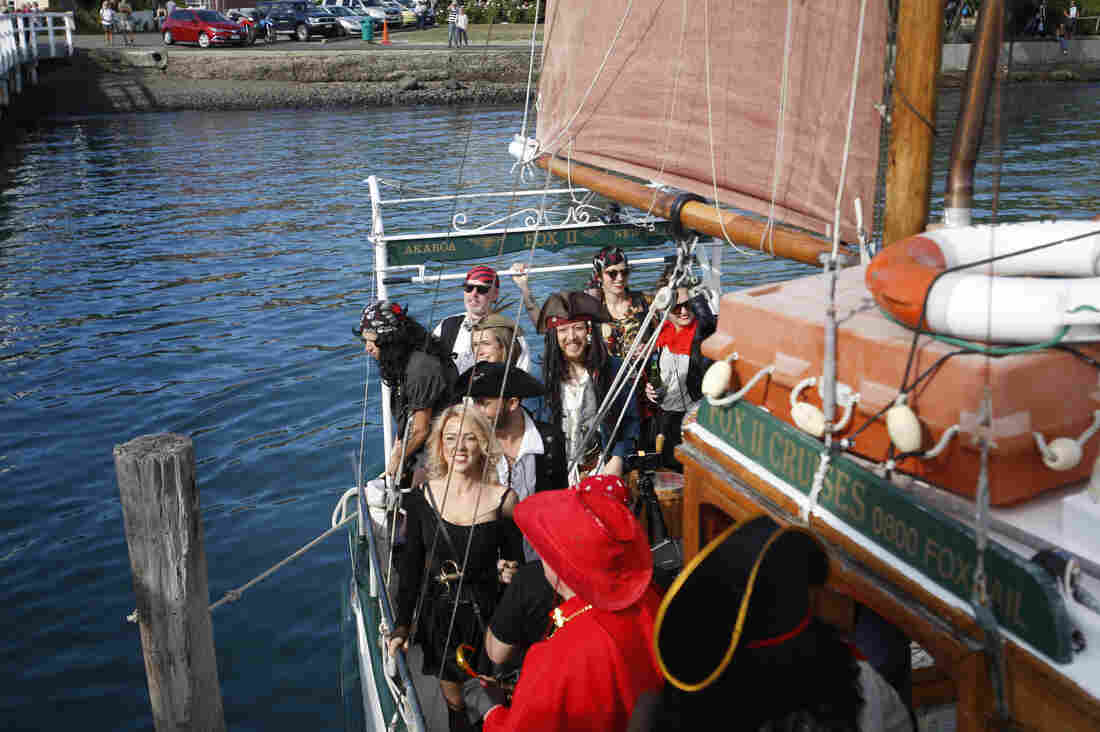 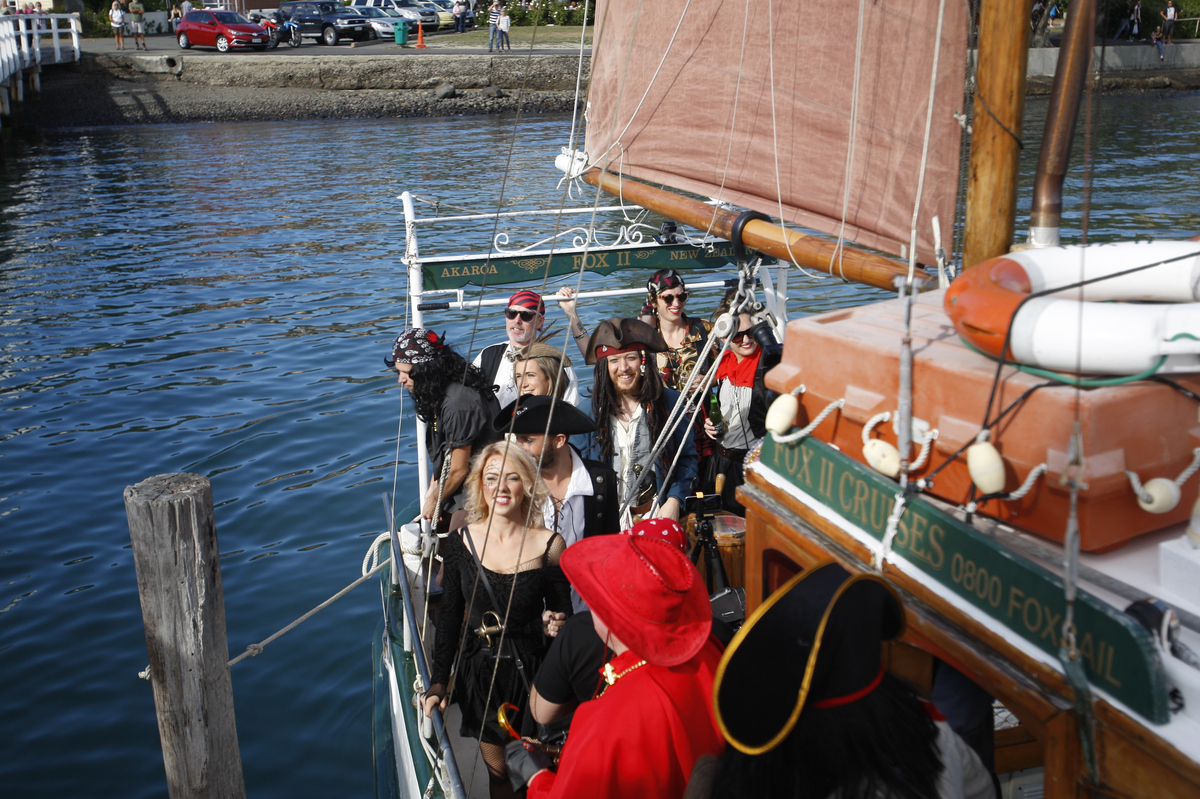 The Pastafarian wedding party on a pirate-themed boat.

"I've had people from Russia, from Germany, from Denmark, from all over contacting me and wanting me to marry them in the church because of our nondiscriminatory philosophy," Martyn told the BBC. "We will marry any consenting legal adults who meet the legal requirement."

"While some claim this is a 'parody organisation', members have rebutted this on a number of occasions," he wrote, according to the Herald. "Most approved organisations are faith-based and cluster around well-known religious views, however, a number have what might be considered an 'alternative philosophy.' "