Accessibility links
Trump Rally In Southern California Is Scene Of Large Counterprotest, Arrests : The Two-Way Hundreds of protesters filled the streets outside the Pacific Amphitheater, where Donald Trump spoke as his presidential campaign gets rolling ahead of California's June primary. 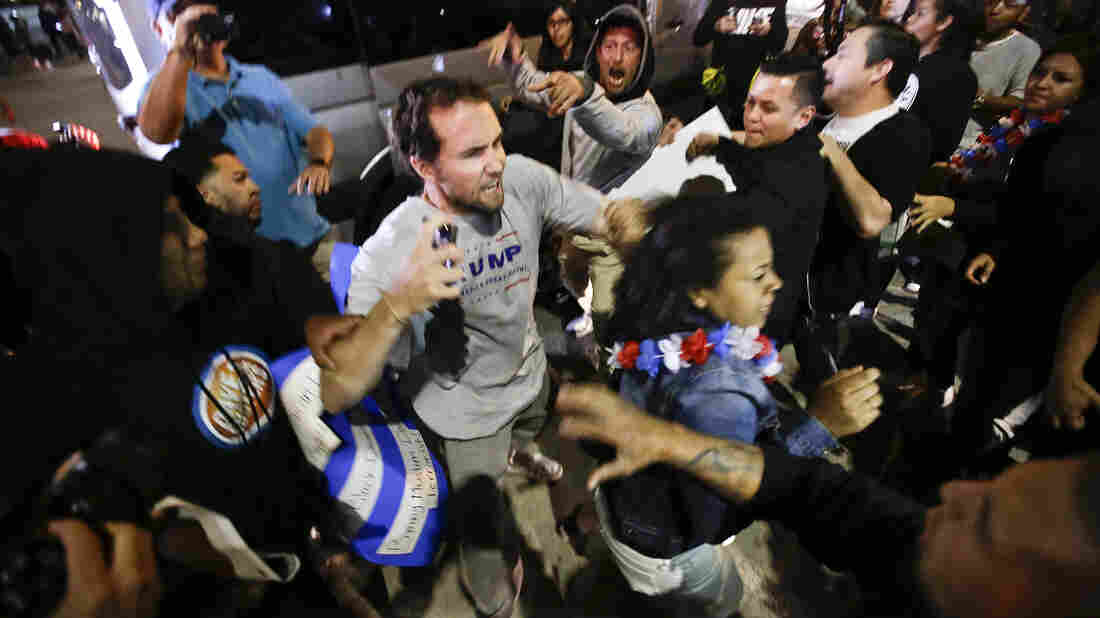 A Donald Trump supporter and critics of the presidential candidate yell at each other outside a rally for the Republican in Costa Mesa, Calif., on Thursday. Chris Carlson/AP hide caption 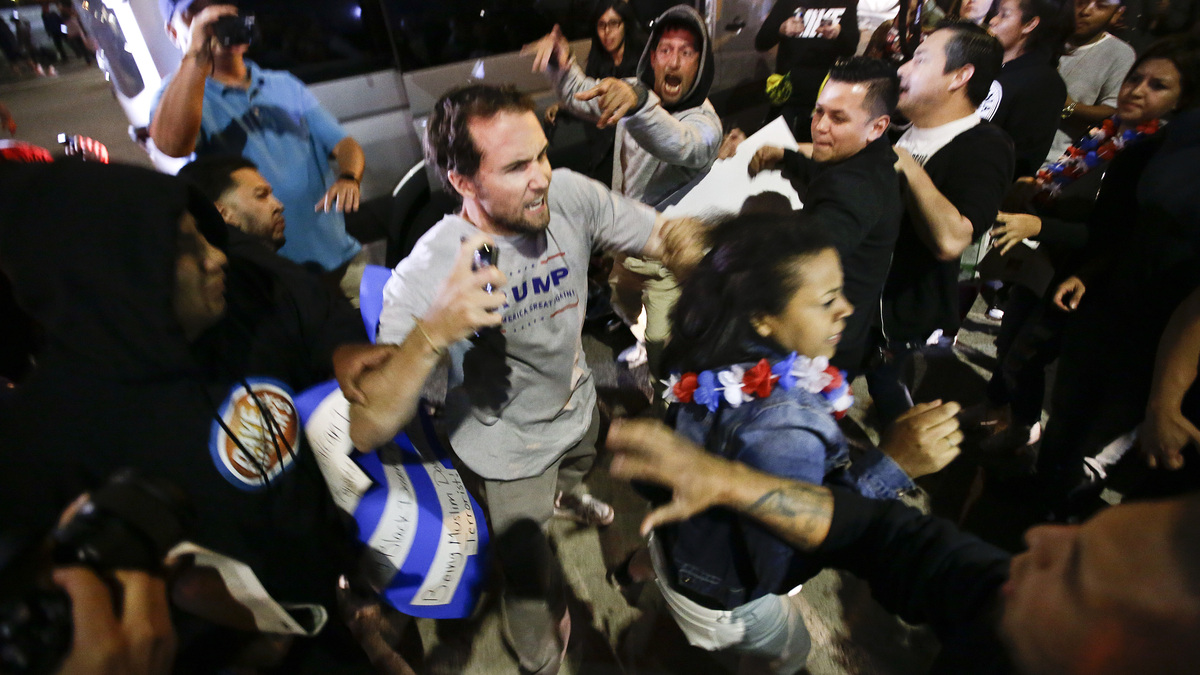 A Donald Trump supporter and critics of the presidential candidate yell at each other outside a rally for the Republican in Costa Mesa, Calif., on Thursday.

Inside the rally, people chanted "Build that wall." Outside, others chanted "Don't vote Trump" — and before the night was over, the two sides had a tense confrontation on a street in Costa Mesa, Calif., where Donald Trump gave a speech Thursday.

Police say no major injuries were reported — but that they also arrested around 20 people. Before the night was over, demonstrators attacked at least one police car, shattering its windows.

Hundreds of protesters filled the streets outside the Pacific Amphitheater, an outdoor venue in Orange County where Trump spoke as his presidential campaign gets rolling ahead of California's June primary.

Some protesters waved Mexican flags, in a rebuke to Trump's statements about immigration. Police helicopters, as well as a row of officers on horseback and others in full riot gear, were deployed to keep the pro- and anti-Trump sides from clashing.

Two reporters from member station KPCC were at the rally; from their report:

"While some have speculated that Trump might be toning down his campaign rhetoric, Thursday night's speech was a return to many of the points he's made for months on the trail. He taunted his rivals, talked torture to combat terrorism, and pledged to build a wall on the Mexican border.

"He took special note of the rising LA murder rate.

" 'In this area, crime has increased 33 percent in the last year. What the hell is going on? I know what's going on,' he told the crowd.

"He attributed it to an increase in illegal immigration from Mexico, though research shows that not to be true."

Many of the Trump supporters who attended last night's rally arrived hours beforehand; by 5 p.m. local time, a long line stretched outside the venue at the Orange County Fairgrounds. The crowd included a group of young girls wearing "Kids for Trump" T-shirts, as KPCC's Ben Bergman reported via Twitter.

Clashes between Trump's backers and critics began in the hours before the Republican front-runner spoke, with some footage from the scene showing people yelling, shoving and swinging at one another.

Spotted outside the @realDonaldTrump rally in Costa Mesa: "Kids for Trump" pic.twitter.com/R2EJZKofd0

For at least a short while later in the night, the protest morphed into a sort of car meet, with the driver of a Miata performing an extended doughnut in the intersection and a Mustang's driver doing a burnout as the crowd cheered.