Accessibility links
Pentagon Report Says Airstrike On Afghan Hospital Wasn't A War Crime : The Two-Way The Pentagon's investigation says none of the military personnel involved knew they were attacking a hospital. It says the assault, which killed dozens of people, was caused by a series of errors. 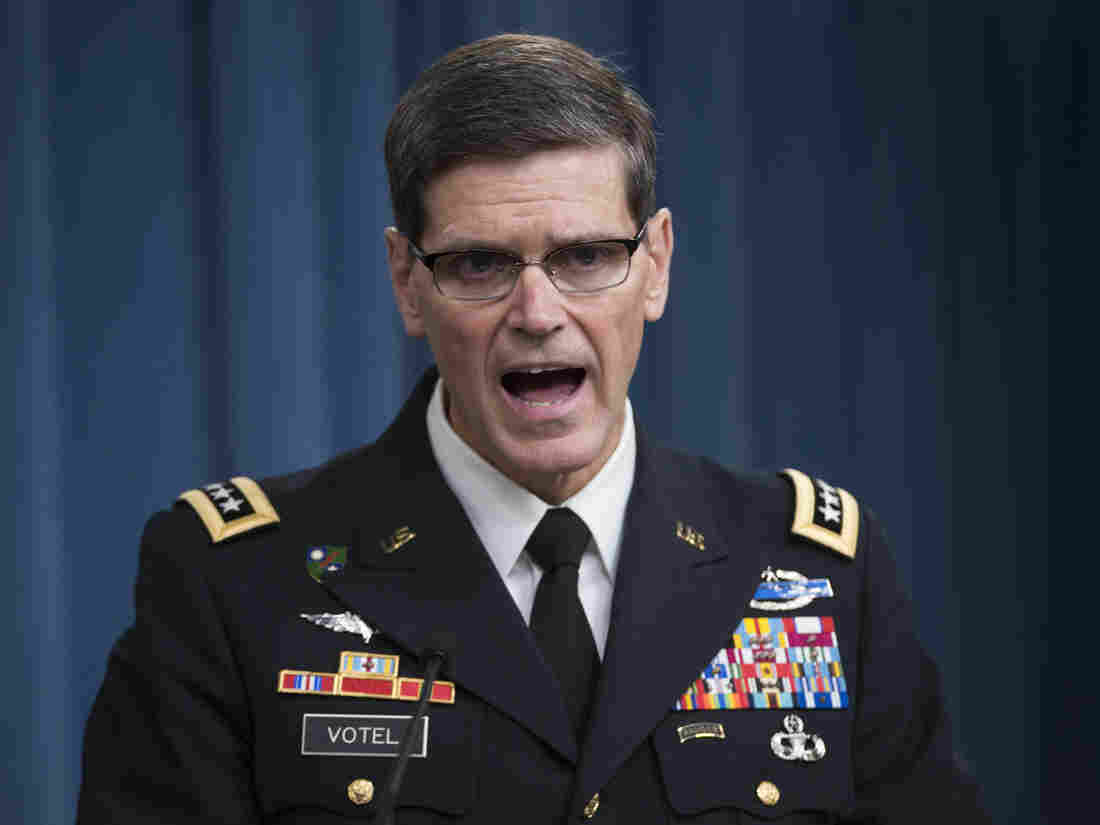 Army Gen. Joseph Votel, commander of U.S. Central Command, briefs reporters on the release of the investigation into the U.S. airstrikes on the Doctors With Borders trauma center in Kunduz, Afghanistan. Molly Riley/AP hide caption 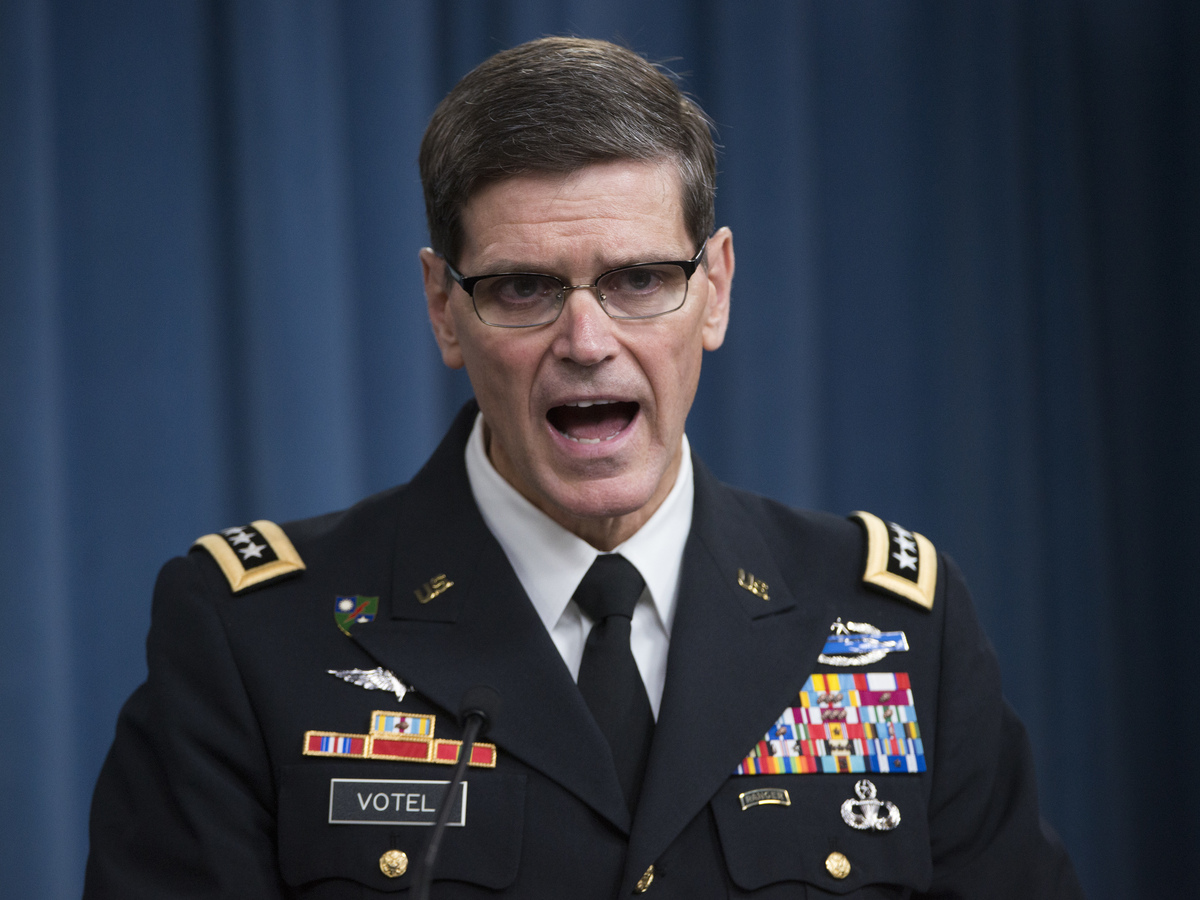 Army Gen. Joseph Votel, commander of U.S. Central Command, briefs reporters on the release of the investigation into the U.S. airstrikes on the Doctors With Borders trauma center in Kunduz, Afghanistan.

The Pentagon's final report on the deadly U.S. airstrike on a Médecins Sans Frontières trauma center in Kunduz, Afghanistan, last October concludes the incident was caused by "human errors, compounded by process and equipment failures."

The report states that the assault, which killed dozens of medical staff and patients, does not constitute a war crime — contrary to what MSF (also known as Doctors Without Borders) has argued.

It comes down to intent, the report says:

The Pentagon has disciplined 16 service members as a result of the strike.

NPR's Tom Bowman reports on Morning Edition that the disciplined personnel include a "two-star general, a special forces commander who was on the ground, various officers." He adds: "Some were removed from command shortly after this happened; others were given letters of reprimand, so they could be career-enders." The penalties do not include criminal charges.

MSF calls the punishment "out of proportion" to the damage, and says, "The lack of meaningful accountability sends a worrying signal to warring parties, and is unlikely to act as a deterrent against future violations in the rules of war."

Incomprehensible that, under the circumstances described by the U.S., the attack was not called off. #Kunduz https://t.co/WMzX6LGTgh

Forty-two people died in the Kunduz strikes. Initially, the Pentagon put the toll at 30, but MSF later increased its figure. The report says the U.S. government has "relied primarily upon MSF for casualty estimates, and these numbers have not been independently verified."

The Two-Way has gone into depth about the "series of avoidable errors" detailed in a November 2015 report: Among other things, the team was "inadequately briefed," there were technical issues with the onboard communication system, and the location was misidentified because of a targeting error. The intended target was an insurgent-controlled site 440 yards away from the MSF hospital. 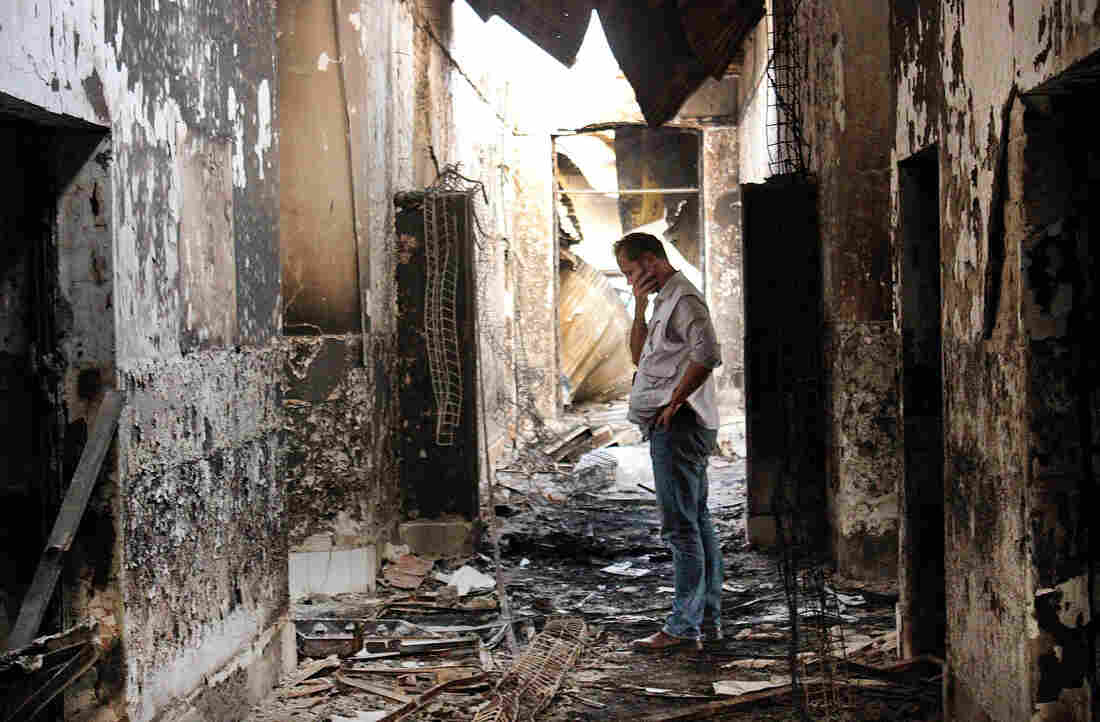 An employee of Doctors Without Borders walks inside the charred remains of the organization's hospital after it was hit by a U.S. airstrike in Kunduz, Afghanistan in October. Najim Rahim/AP hide caption

The report released today has this account of the lead-up to the strike:

It adds that as the plane was zeroing in on the hospital, a crew member called a TV Sensor Operator warned that the target might be wrong and suggested that another structure was the correct target. Despite "several attempts to clarify which structure was the actual target," the weapons system ultimately fixed on the hospital, which apparently "generally matched the physical description" of the nearby insurgent-controlled building.

The latest report also addresses two previously unanswered questions tied to the length of the assault:

Why did it take so long to realize the mistake despite repeated calls from the hospital to U.S. officials?

According to the military's account, the assault began at about 2:08 a.m. local time and lasted about half an hour — even though the first calls from MSF came 11 minutes after it began:

"Starting at approximately 2:19 a.m. MSF personnel notified several U.S. government representatives that the MSF trauma center was being engaged. Due to the fighting around Kunduz, it was initially unclear who was engaging the MSF Trauma Center. Following a series of relayed messages through multiple echelons of command, the U.S. Special Forces commander on the ground eventually realized that the AC-130 was engaging the MSF Trauma Center – not the Taliban-controlled structure the crew believed it was engaging – and halted the strike at approximately 2:38 a.m. The investigation determined that the steps taken by several U.S. military personnel during this period were inadequate."

MSF maintains that the assault lasted more than an hour.

Gen. Joseph Votel, speaking to reporters at the Pentagon, says he was struck by communication lapses between personnel in the air and on the ground.

Why did they keep firing, even with no sign of return hostile fire?

Here's Tom's exchange with Votel during the press conference:

VOTEL: This is an area that we did examine in some great detail. ... It's not uncommon to not see fire coming from a building or from a location coming through a sensor system, and that is my own personal experience. Some can ... trained analysts perhaps who have looked at a lot of this over a lot of time and focus on it may be able to do that, but it's not uncommon to not be able to identify that.

The other aspect that we looked at was what was the pattern of life around this particular facility. And I think one of the contributing factors here was that, what was being described by the ground force commander happening at the intended target was very closely being replicated at the Doctors Without Borders facility. They found about the same number of people, about the same general locations outside the building, and so they ...

TOM: Was anybody shooting? Nobody was shooting at the hospital, correct?

VOTEL: Nobody from the Afghans. Right. It was at a different location.

TOM: Wouldn't they think something was wrong here?

VOTEL: Again, yeah, again — there's a mistaken identification of the target. So the aircraft is looking at one location, the ground forces thinking they're looking at another location. There's no way to visually confirm that back and forth between them, and their discussions as you look at the transcripts don't add clarity to that.

TOM: I don't want to belabor this, but looking at what they saw, there was no shooting, there was no one running around with RPGs, there was no firefight on the ground, so why would they just keep hitting it?

VOTEL: In the experience of these individuals right here, who have done these types of operations before, what they were seeing was frankly in line with what was being described from the ground and with their own experience. I mean the enemy does adapt to how we operate, so they don't operate in quite an open fashion where we can always see everything that we have.

MSF isn't satisfied with the military's account and tweeted a list of further questions after the release of the report.

"Today's briefing amounts to an admission of an uncontrolled military operation in a densely populated urban area, during which US forces failed to follow the basic laws of war," Meinie Nicolai, president of MSF Belgium, says in a statement. "It is incomprehensible that, under the circumstances described by the US, the attack was not called off."

Tom reports that according to the Pentagon, there will not be an independent investigation into the Kunduz incident. MSF continues to demand one.