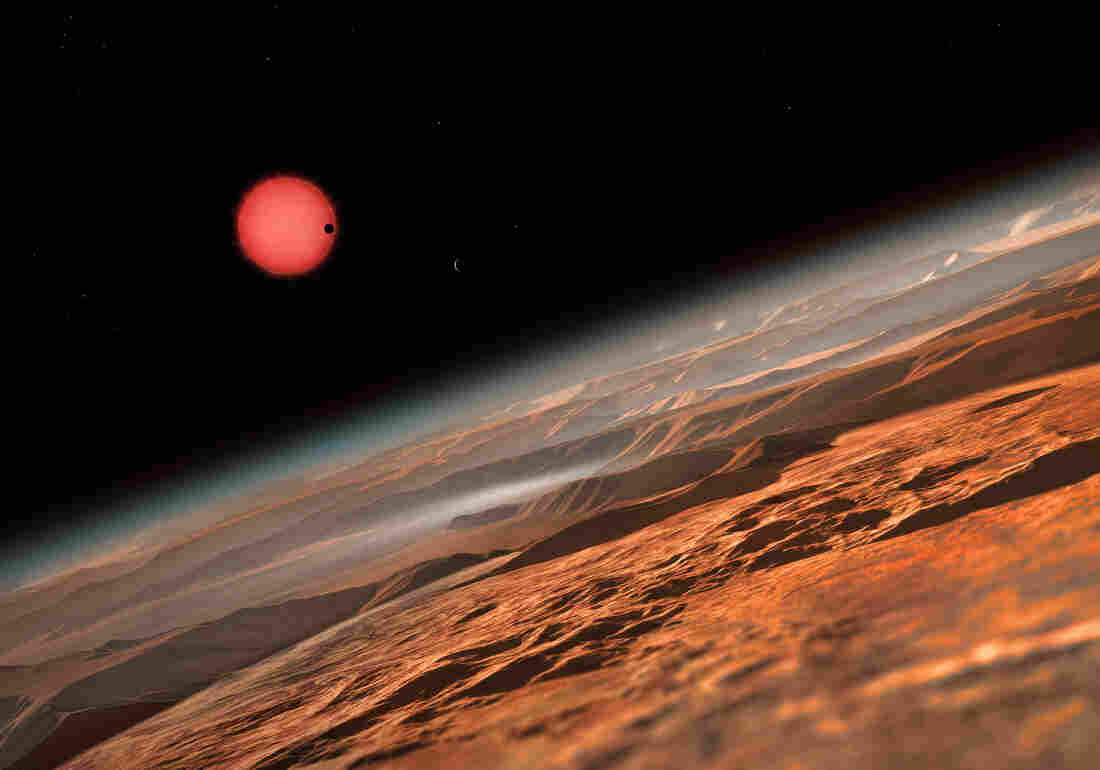 This artist's rendering shows what the view might look like from one of the three planets orbiting an ultracool, reddish dwarf star just 40 light-years from Earth. ESO/M. Kornmesser/Nature hide caption 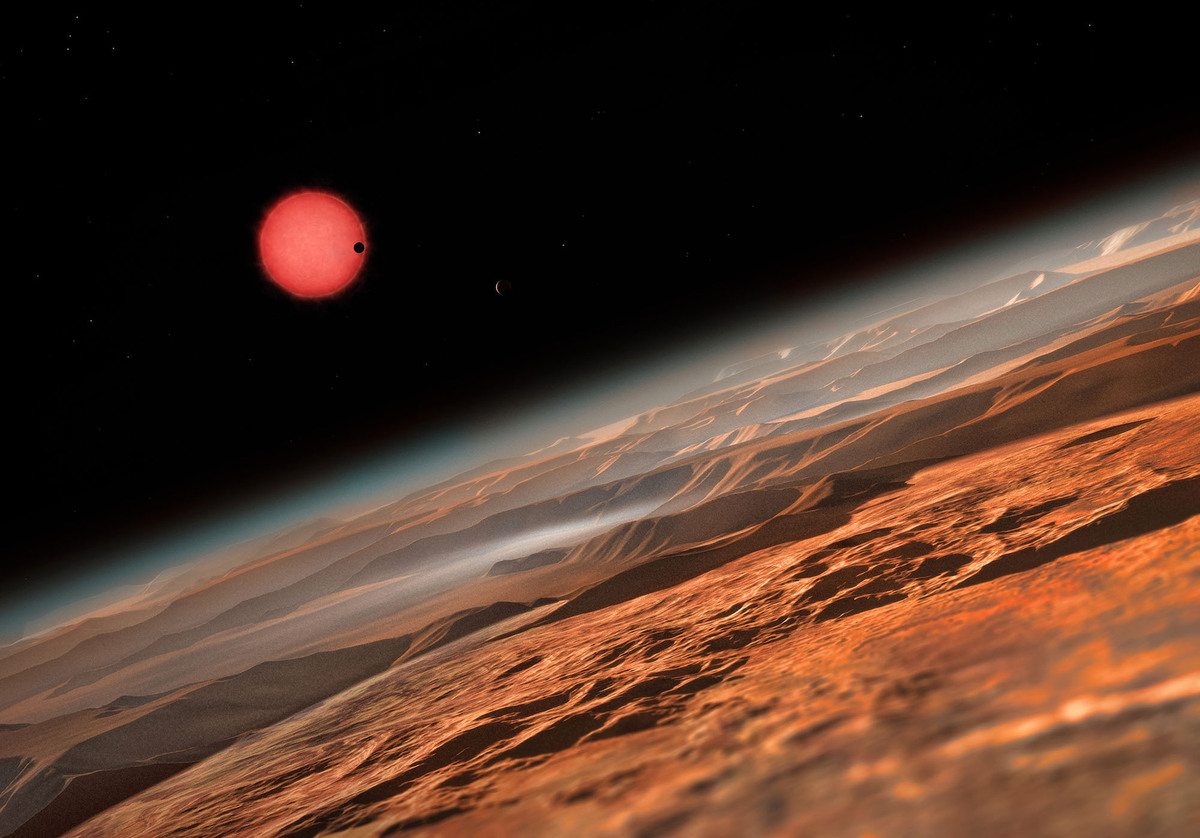 This artist's rendering shows what the view might look like from one of the three planets orbiting an ultracool, reddish dwarf star just 40 light-years from Earth.

A trio of newly discovered Earth-sized planets looks ideally suited to search for signs that these alien worlds might be able to support life.

The planets orbit close to an unusually small, reddish star that's about one-eighth the size of our sun and is far cooler, researchers report in the journal Nature.

The closest planet to the star orbits in about one-and-a-half Earth days. From the planet's surface, the star would look like a reddish ball fixed to one spot in the sky. Scientists don't yet know the mass of the planets or what they're made of.

The bizarre little solar system is just 40 light-years away — practically in our backyard. Astronomers have discovered more than a thousand planets outside our solar system, but it's still rare to find ones that look promising in terms of habitability.

"These planets are Earth-sized, they are temperate — we can't rule out the fact that they are habitable — and they are well-suited for atmospheric studies," says Julien de Wit, a researcher at MIT. "This is what we know at this stage."

Until recently, he says, some theorists argued that ultracool dwarf stars wouldn't have planets at all. But a group led by Michael Gillon and Emmanuel Jehin of the University of Liege in Belgium took a risk and built a prototype telescope called TRAPPIST to look at 60 nearby ultracool stars.

"Now we actually know that these stars can produce such planets," de Wit says. "Planets around such stars are really great targets for advanced study, like atmospheric characterization." 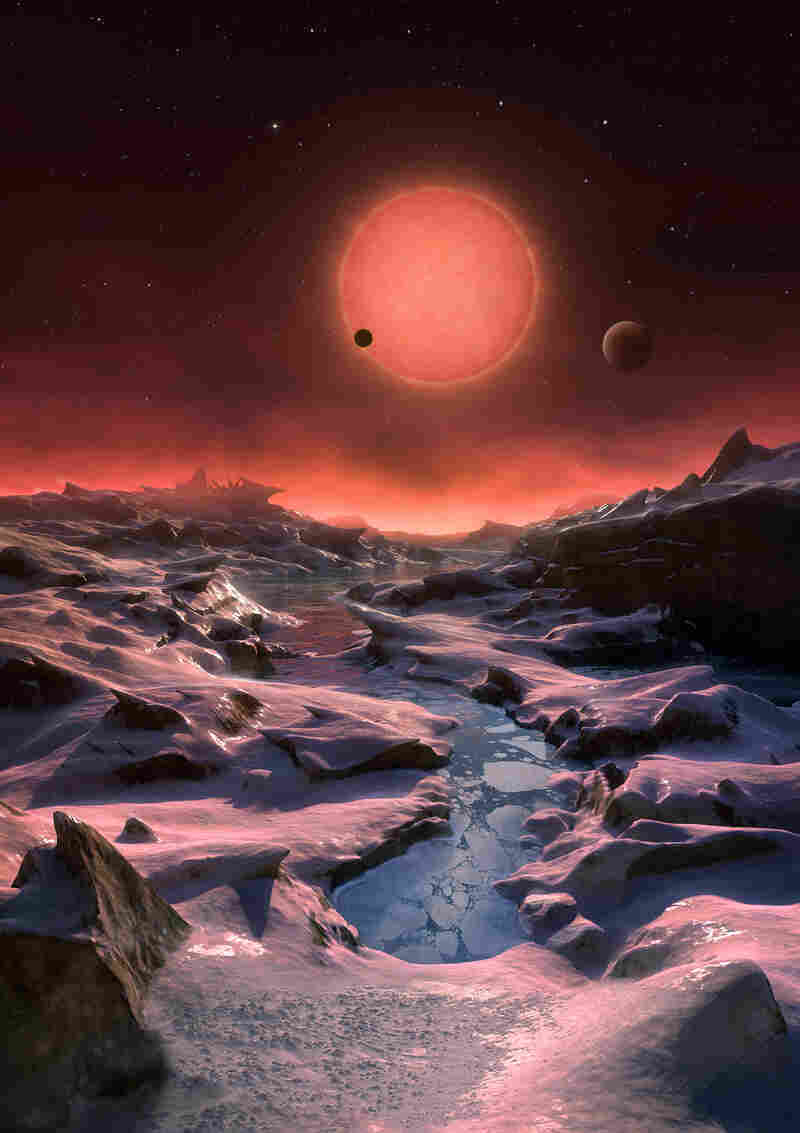 The three planets depicted in this rendering have sizes and temperatures similar to those of Venus and Earth. They were discovered using the TRAPPIST telescope at the La Silla Observatory in Chile. ESO/M. Kornmesser/Nature hide caption 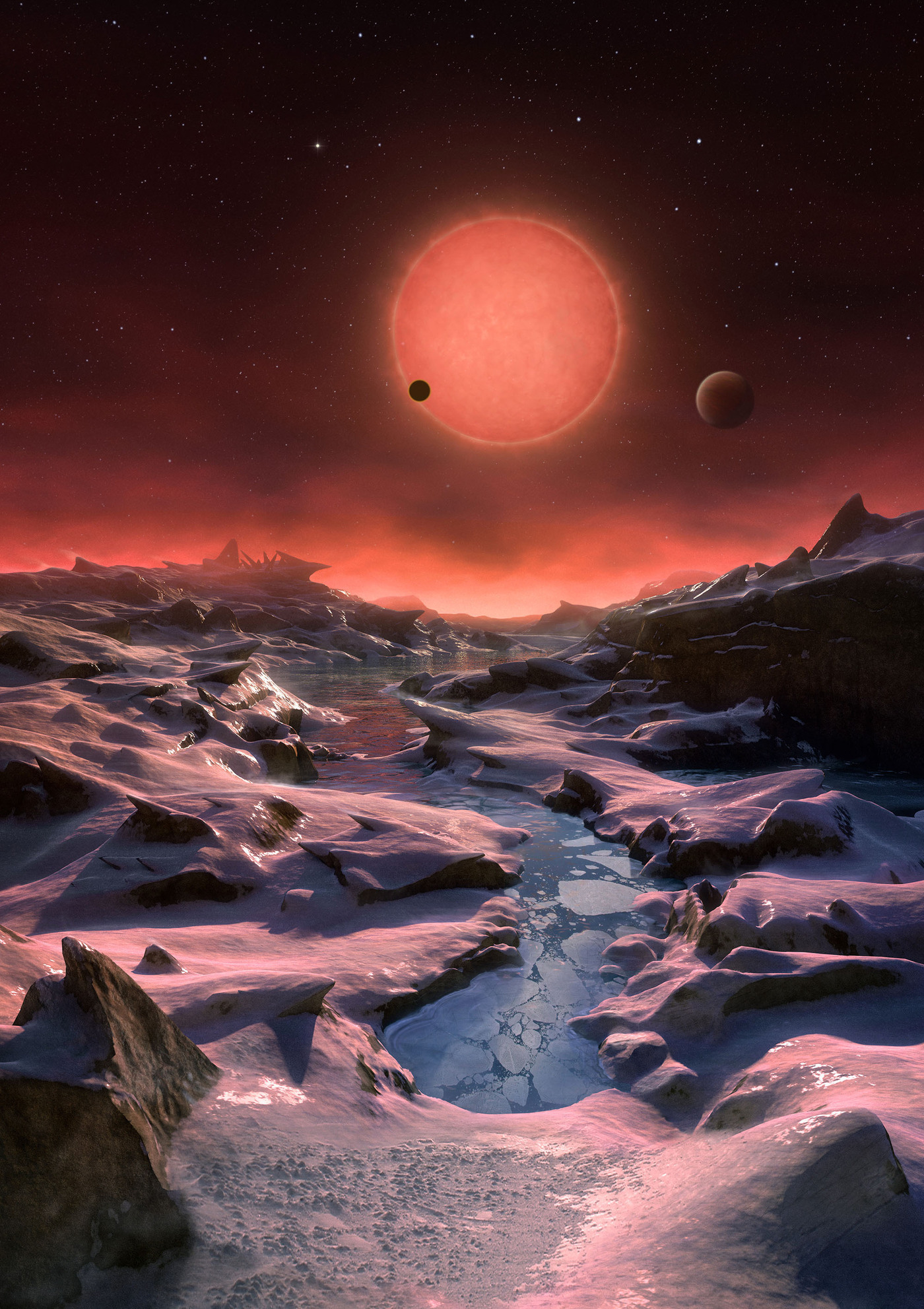 The three planets depicted in this rendering have sizes and temperatures similar to those of Venus and Earth. They were discovered using the TRAPPIST telescope at the La Silla Observatory in Chile.

What's more, the fact that this is a small, cool star makes it easier to study the starlight that filters through the planets' atmospheres, de Wit says. He notes they're getting ready to do just that with the Hubble Space Telescope.

Others agree that these particular planets are compelling. "They're all pretty darn interesting," says Marc Kuchner of NASA's Goddard Space Flight Center. He thinks each looks like "another compelling example of a planet that we really ought to spend some quality time getting to know."

He says the planets remind him of GJ 1214 b, a world about twice the size of Earth that scientists have been eager to probe. One recent study found that its atmosphere is dominated by some kind of exotic cloud cover.

"Clouds may be sort of romantic, but it's so hard to tell what they're made of!" says Kuchner, who notes that three planets around their cool star look like the next logical ones for study.

"This is the star with the lowest temperature that seems to have planets around it," he adds.

Researchers hope to study planets beyond our solar system with the help of the soon-to-be-launched James Webb Space Telescope, which can look for things such as water, ozone and carbon dioxide.

Ultimately, the goal is to find not just the ingredients for life, but some indication that alien life is actually living there.