Accessibility links
Turkey's Prime Minister To Step Down As President Erdogan Pushes For More Power : The Two-Way Prime Minister Ahmet Davutoglu was seen by President Recep Tayyip Erdogan as lukewarm toward his effort to transform the largely ceremonial office of president into Turkey's chief executive. 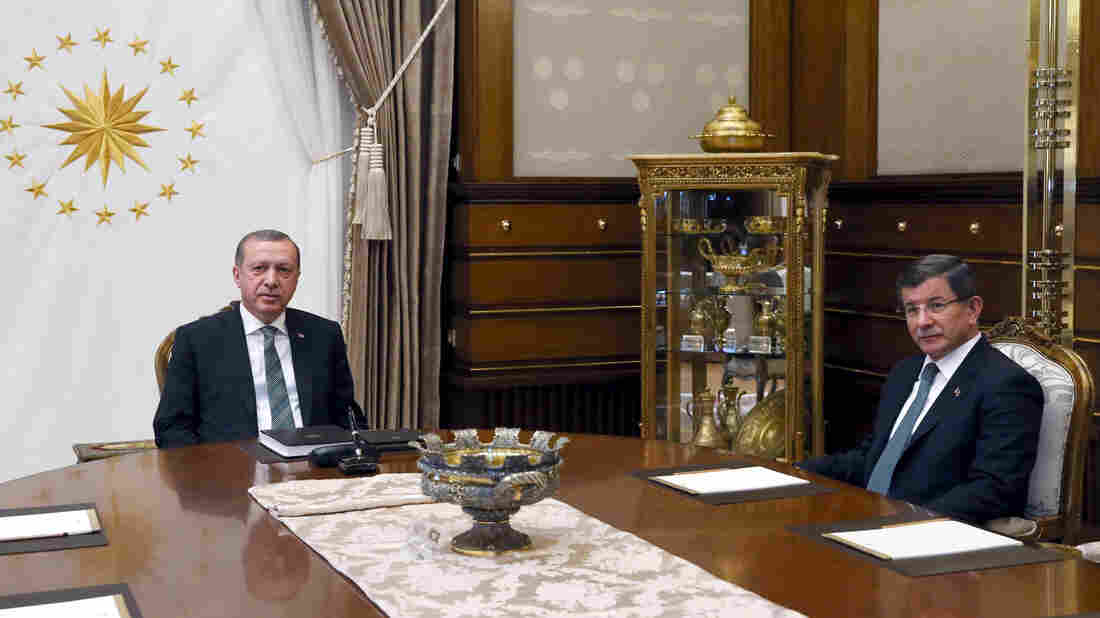 Turkey's President Recep Tayyip Erdogan (left) and Prime Minister Ahmet Davutoglu pose for a photograph at the start of a meeting in Ankara, Turkey, on Wednesday. Davutoglu announced Thursday he would resign. Murat Cetinmuhurdar/AP hide caption 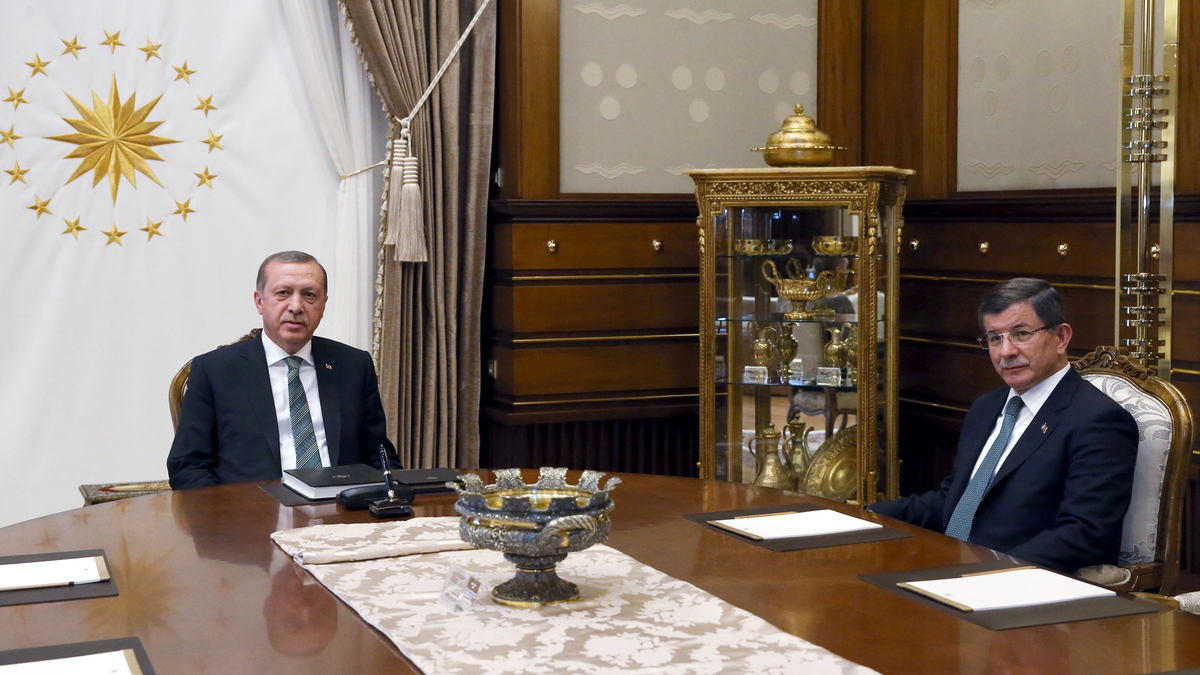 Turkey's President Recep Tayyip Erdogan (left) and Prime Minister Ahmet Davutoglu pose for a photograph at the start of a meeting in Ankara, Turkey, on Wednesday. Davutoglu announced Thursday he would resign.

Turkish Prime Minister Ahmet Davutoglu — who is supposed to be in charge of the government, according to the country's constitution — abruptly announced he won't seek to continue in office, as Turkish President Recep Tayyip Erdogan continues to press for more executive power.

After meeting with Erdogan in the capital city of Ankara, Davutoglu told a news conference today that there will be an extraordinary congress of the ruling AK Party on May 22 and that he won't be standing for party leader, thereby ending his term as prime minister after just 20 months.

"I was in front of you; now I will be among you," he told party officials in televised remarks. Davutoglu added that he originally intended to complete his four-year term. "It wasn't my preference to shorten this; unfortunately it had to be shorter than four years."

Although Erdogan left the party when he was elected president, he is expected to have a major role in choosing the next prime minister, as he did when Davutoglu was named to replace him as prime minister.

Political analysts say Davutoglu, a former university professor, has been quite deferential to Erdogan throughout his tenure, but apparently not deferential enough for the charismatic, strong-willed president.

Sinan Ulgen, a Turkey expert with the Carnegie Endowment for International Peace, says Davutoglu might have agreed with Erdogan on most matters, but was apparently faulted for not pushing hard enough to change Turkey's Constitution to strip executive powers from the prime minister's office and shift them to the presidency.

"If not for that, this struggle over executive power could have been contained and managed," he says. "But ... President Erdogan apparently believed that Davutoglu wasn't doing his utmost to advance this agenda, a bit too ambivalent about this prospect."

Political Shake-Up At An Uncertain Time

As a practical matter, Turkish opposition politicians say changing the prime minister isn't such a dramatic development, because Erdogan has been effectively running the country from the presidency since taking office.

But it comes at a time when Turkey is embroiled in a series of regional crises. Washington is counting on Turkey's support in the fight against ISIS, and the European Union is relying on Turkey to contain the flow of migrants toward Europe.

At the same time, however, Turkey's border with Syria has been penetrated routinely by rockets from Islamic State positions in northern Syria; a series of deadly terrorist attacks by ISIS supporters and backers of militant Kurdish groups fighting for greater autonomy has alarmed the public, depressed Turkey's economy and weakened Turkey's currency, the lira; and the country is struggling to cope with millions of refugees and other migrants from Syria, Iraq, Afghanistan and North Africa.

A Turkish presidential adviser has already ruled out early parliamentary elections, in comments to the Reuters news agency. But with opposition parties slumping in the polls, analysts say the ruling party may be tempted to call snap elections, in hopes of gaining a two-thirds majority. That would allow the government to push through the strong presidency constitutional amendment without a public referendum. Recent opinion polls suggest that if that vote were held today, it would probably fail by a decisive margin.

A handful of Cabinet ministers and other top party officials have been floated as possible replacements for Davutoglu, including Transport Minister Binali Yildirim and Erdogan's son-in-law Berat Albayrak, the energy minister. Analyst Ulgen says whoever gets the job of prime minister will undoubtedly be judged on his willingness to weaken his own office — by pushing to move executive authority to the president.

"Yes, absolutely," he says. "The main qualification for the next prime minister will be how willing he will be to advance the presidential agenda."