N.C.'s 'Bathroom Law' Energizes Voters On Both Sides Of The Issue 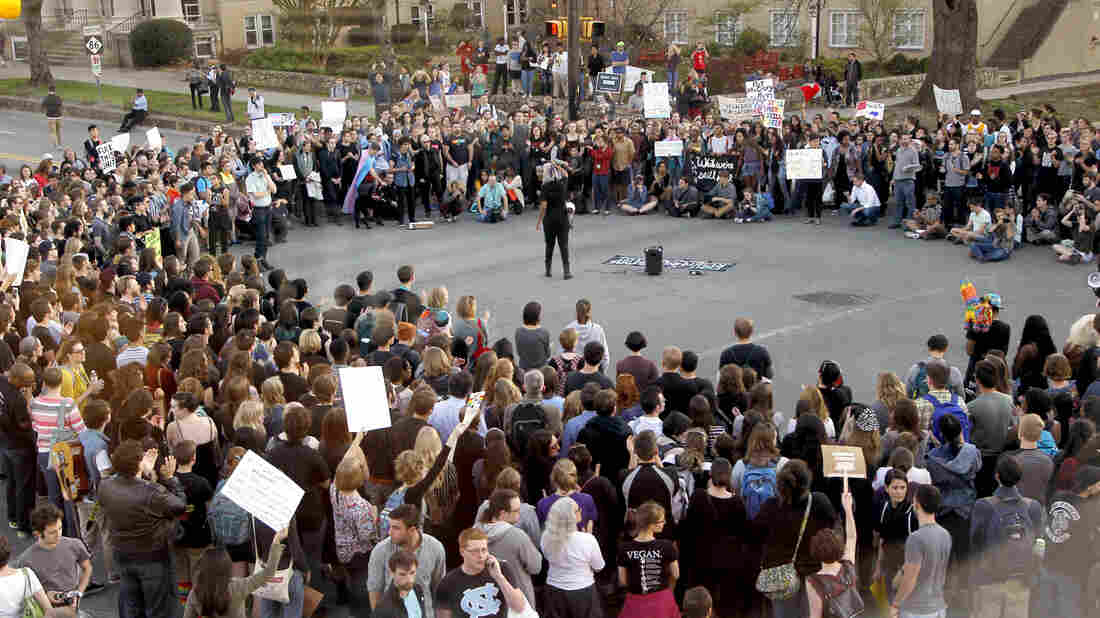 Hundreds attend a rally in Chapel Hill, N.C., on March 29 to protest the passage of House Bill 2. The state of North Carolina and the U.S. Justice Department are suing each other over the law's restriction on protections for lesbian, gay, bisexual and transgender people. Chris Seward/Raleigh News & Observer/TNS via Getty Images hide caption 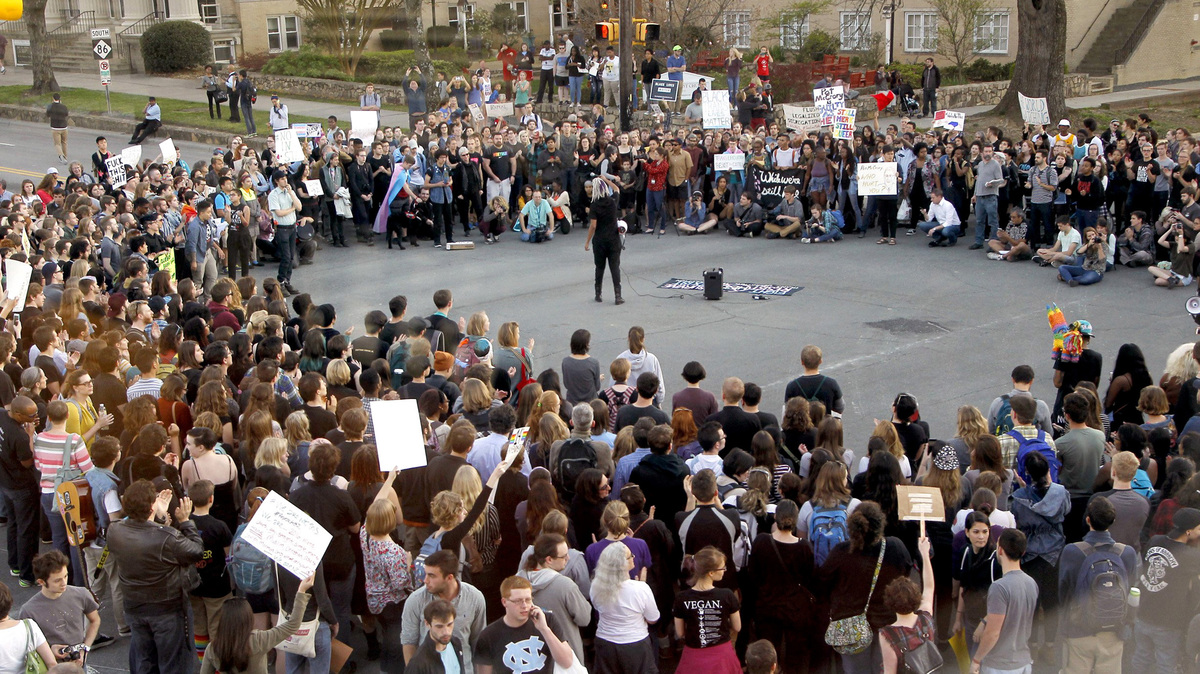 Hundreds attend a rally in Chapel Hill, N.C., on March 29 to protest the passage of House Bill 2. The state of North Carolina and the U.S. Justice Department are suing each other over the law's restriction on protections for lesbian, gay, bisexual and transgender people.

After North Carolina's governor filed a lawsuit asking federal courts to keep in place a controversial law that places limits on transgender access to bathrooms, the U.S. Justice Department responded with a lawsuit of its own.

"We are filing a federal civil rights lawsuit against the state of North Carolina, Gov. Pat McCrory, the North Carolina Department of Public Safety and the University of North Carolina," Attorney General Loretta Lynch said in a press conference Monday. "We are seeking a court order declaring House Bill 2's restroom restriction impermissibly discriminatory, as well as a statewide bar on its enforcement."

The state's legal filing came ahead of an end-of-Monday deadline for North Carolina to respond to the Department of Justice over the law barring protections for LGBT people in the state.

"The Obama administration is bypassing Congress by attempting to rewrite the law and set restroom policies for public and private employers across the country, not just North Carolina. This is now a national issue that applies to every state and it needs to be resolved at the federal level," North Carolina Gov. Pat McCrory said in a statement about the filing. He said the lawsuit was an attempt to "clarify" national law.

In a statement Monday afternoon, McCrory also called for Congress to chime in.

"I think it's time for the U.S. Congress to bring clarity to our national anti-discrimination provisions," he said, repeating it twice for emphasis.

Lynch, however, said the federal laws concerning gender and gender discrimination are clear, and that North Carolina's law is in violation.

The state law in question, known as HB2, requires transgender people at state facilities, including schools, to use the restroom that corresponds to the sex on their birth certificate — not their identified gender. (The law also blocks local jurisdictions from passing their own anti-discrimination ordinances, among other things.)

Telling transgender people that "history was on [their] side," Lynch explained why North Carolina's law posed such a threat to Americans. She said:

"This action is about a great deal more than just bathrooms. This is about the dignity and respect we accord our fellow citizens and the laws that we, as a people and as a country, have enacted to protect them — indeed, to protect all of us. And it's about the founding ideals that have led this country — haltingly but inexorably — in the direction of fairness, inclusion and equality for all Americans.

"This is not the first time that we have seen discriminatory responses to historic moments of progress for our nation. We saw it in the Jim Crow laws that followed the Emancipation Proclamation. We saw it in fierce and widespread resistance to Brown v. Board of Education. And we saw it in the proliferation of state bans on same-sex unions intended to stifle any hope that gay and lesbian Americans might one day be afforded the right to marry."

The DOJ, which said last week that the law violates the Civil Rights Act and Title IX, had set a Monday afternoon deadline for the state to reply and say whether it intended to enact the law.

Lynch said the state requested an extension that was under active consideration.

N.C.'s 'Bathroom Law' Energizes Voters On Both Sides Of The Issue

"But instead of replying to our offer or providing a certification, this morning, the state of North Carolina and its governor chose to respond by suing the Department of Justice," she said.

In the state's lawsuit, the governor and another state official instead say the DOJ's position is a "radical reinterpretation" of the Civil Rights Act and a "baseless and blatant overreach."

McCrory's lawyers also say there's nothing discriminatory about the law.

Billions of dollars of federal funding may be at stake in the dispute.

"While the lawsuit currently seeks declaratory relief, I want to note that we retain the option of curtailing federal funding to the North Carolina Department of Public Safety and the University of North Carolina as this case proceeds," Lynch said.

But for now, NPR's Carrie Johnson reports, the federal government is trying to reach "a resolution in which the state voluntarily complies."

McCrory's office responded to the DOJ's lawsuit in a statement Monday evening, saying North Carolina is "appropriately seeking legal certainty to a complex issue impacting employers and students throughout the country."

It also accused Lynch of "using divisive rhetoric to advance the Obama administration's strategy of making laws that bypass the constitutional authority of Congress and our courts."

Toward the end of her remarks, Lynch emphasized that the "fear of the unknown" and "discomfort with the uncertainty of change" can cause people to reject what they don't know.

"This is a time to summon our national virtues of inclusivity, diversity, compassion and open-mindedness," she said. "What we must not do — what we must never do — is turn on our neighbors, our family members, our fellow Americans, for something they cannot control, and deny what makes them human."

Additionally, top Republican lawmakers in the North Carolina Legislature on Monday filed their own lawsuit against the federal government Monday addressing Title IX of the Civil Rights Act. This action is separate from the governor's filing against the Justice Department.

The law, which was passed over the course of 12 hours in a special one-day session of the state Legislature, was issued in response to a ordinance by the city of Charlotte that would have established protections for LGBT people. That ordinance would have allowed trans people in Charlotte to use the bathroom corresponding to their gender identity.

The state bill nullified that Charlotte ordinance and required all state facilities to go further and explicitly require that bathrooms be segregated according to sex as assigned at birth.

"It's either a common-sense measure, or rooted in ignorance, depending on whom you ask," Jeff Tiberii of WUNC reported for NPR's Morning Edition.

The law has mobilized voters on both sides, Tiberii says — the conservative base as well as the law's opponents.

"At least two corporations have decided not to expand here, well-known performers have canceled gigs, and even some elected officials have said this has damaged the state's economy and reputation," Tiberii says.

"And there's no consensus on which party this benefits the most."

The Rebuke From DOJ

In a letter to McCrory, the DOJ said that "the State is engaging in a pattern or practice of discrimination against transgender state employees."

The department gave the governor until close of business Monday to reply and say whether it will implement the law or remedy the violations.

One of the sponsors of the law, North Carolina state Rep. Paul Stam, told NPR's Morning Edition earlier Monday that he expected McCrory to fight the Department of Justice on the issue.

"That's what I would hope and expect him to do," Stam said.

Stam also said he wasn't worried about the possibility that North Carolina might lose federal funding over the law, saying it could take years for that process to happen.

"The idea that this is some imminent threat is an empty one," he said.

Stam told NPR the fact that the DOJ is citing the Civil Rights Act — which applies to companies with more than 15 employees — means "this is no longer a threat against North Carolina."

"Every business in the nation that employs more than 15 people is under threat ... that the federal government will sue them" if they don't permit trans employees to use the bathroom corresponding to their gender identity, Stam says.