Accessibility links
Philippines Election: Rodrigo Duterte Ahead In Presidential Race : The Two-Way Rodrigo Duterte, known for shocking language and linked to extrajudicial killings, has vowed to crack down on crime and corruption. His win isn't yet official, but his closest rivals have conceded. 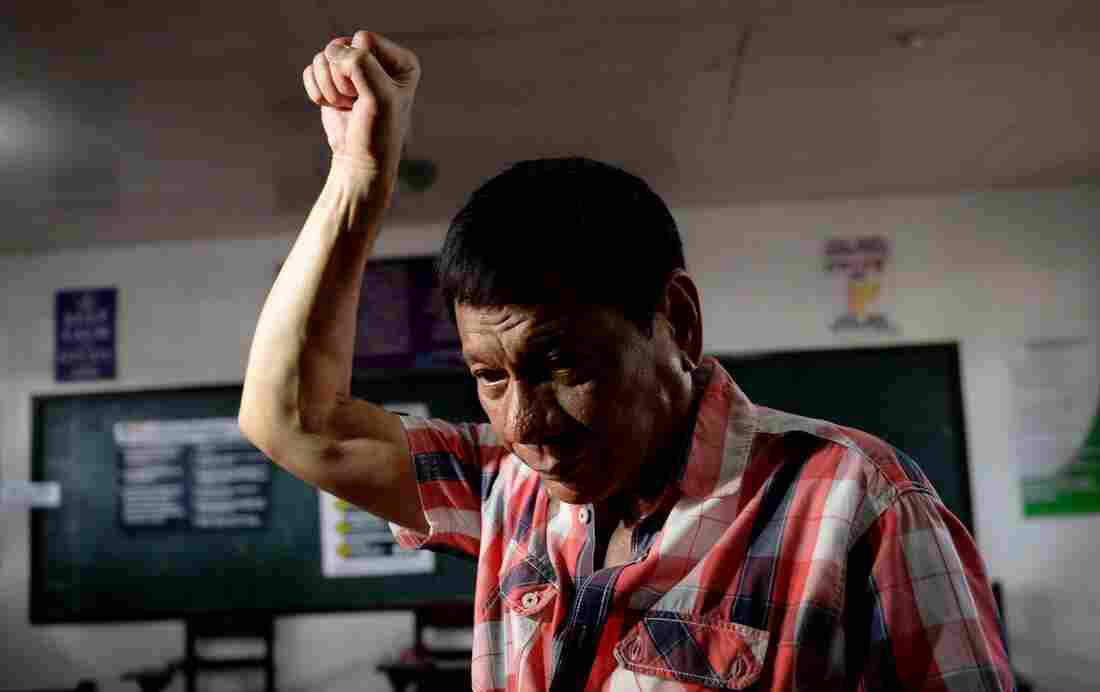 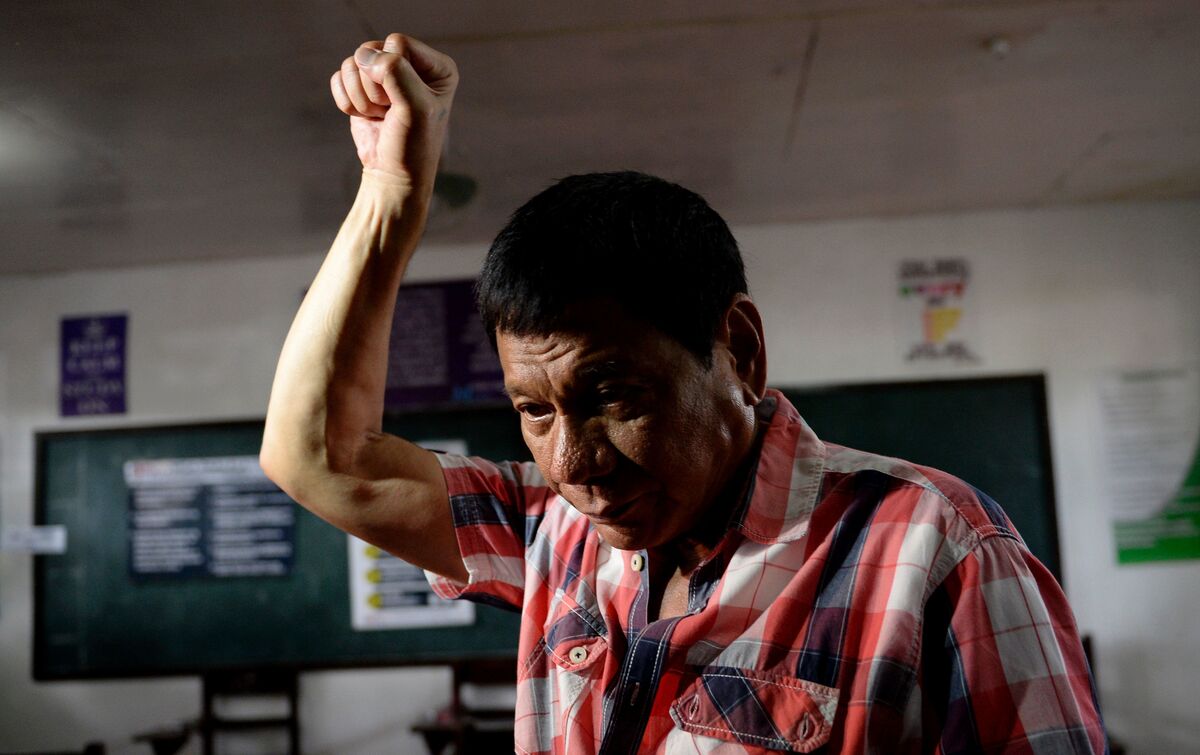 Philippines presidential front-runner and Davao City Mayor Rodrigo Duterte arrives at the voting precinct to cast his vote at a high school in Davao City on Monday.

With 87 percent of precincts counted, Rodrigo Duterte, the mayor of southern Davao City, appears to have clinched the Philippine presidential election. Michael Sullivan reports for our Newscast Unit that Duterte, who began as a political outsider, "collected nearly twice as many votes as his two main rivals, including the man supported by outgoing President Benigno Aquino."

Results are still not official, but his two closest rivals have withdrawn from the race in the face of Duterte's commanding lead, Reuters reports. 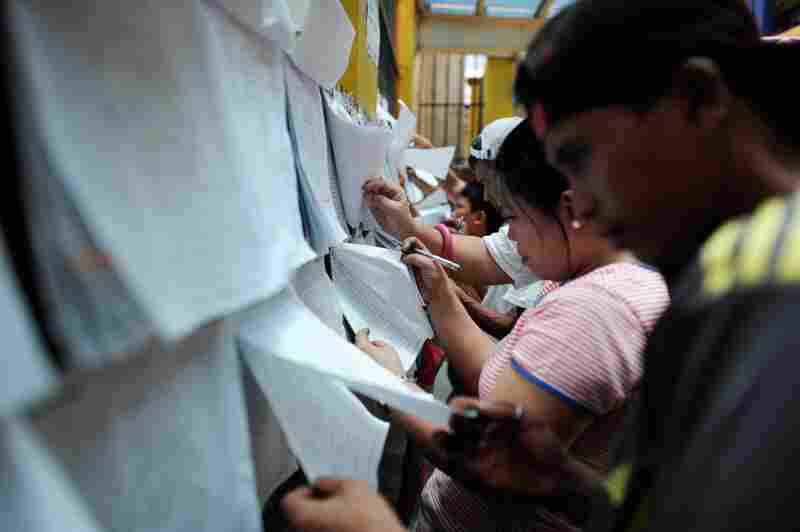 Voters look for their names and assigned precincts at a public elementary school on Sunday in Manila. Dondi Tawatao/Getty Images hide caption

"Forget the laws on human rights."

That's what Philippine presidential candidate Rodrigo Duterte had to say on Saturday in his final speech ahead of Monday's elections.

The former prosecutor's nickname is "The Punisher." He brags about loving Viagra and has seemingly joked about rape. Duterte, mayor of Davao City, also has been linked to extrajudicial killings.

According to unofficial results, he's ahead in the race to lead the Philippines, a country formerly ruled by dictatorship. (The apparent vice presidential front-runner is the son of former dictator Ferdinand Marcos. Duterte has said he would resign and hand over control to the man nicknamed "Bongbong" Marcos "if he fails to 'eradicate' crimes, drugs and corruption within six months," Time reports.)

The tough-on-crime message is resonating with voters, NPR's Michael Sullivan tells Morning Edition. Take this exchange Sullivan had with voter Jefferson Lim, a 30-year-old IT manager, at a polling station near Manila Bay on Monday:

Lim: "I think he can instill discipline in people. Here, I live in Manila, I've been pick-pocketed ... a number of times now. I think criminals aren't afraid of the consequences they do."

As a seven-term mayor, Duterte brought down the crime rate in Davao City, located on the southern island of Mindanao, as The Two-Way has reported. But NPR's Camila Domonoske added: 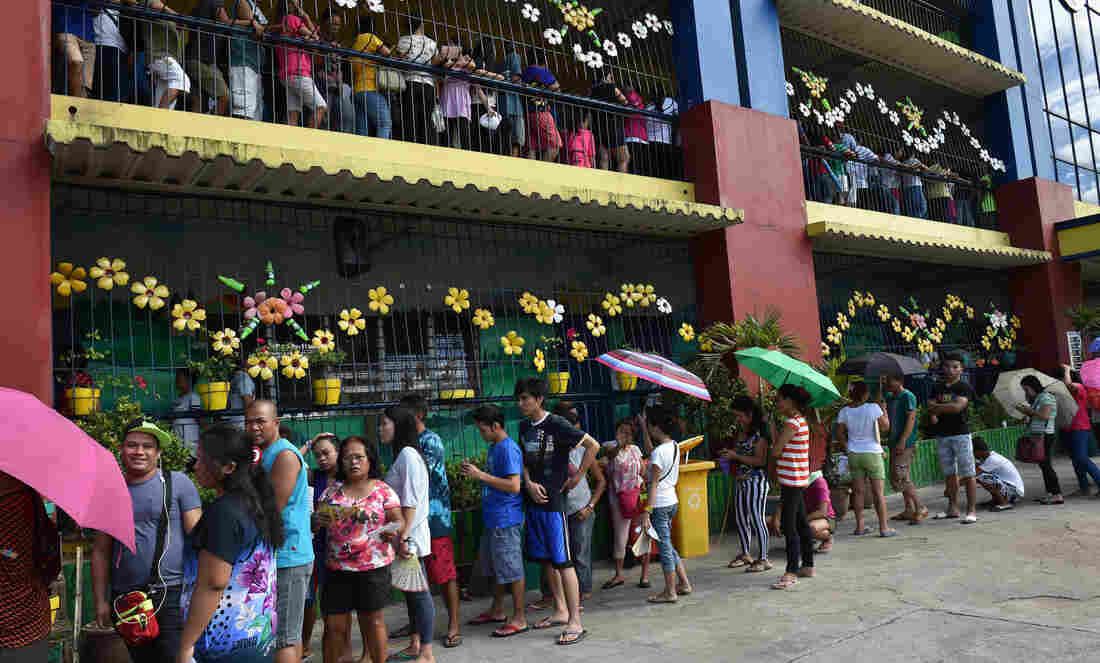 People line up to cast their ballots in the presidential election in suburban Manila. Ted Aljibe/AFP/Getty Images hide caption

"Duterte has variously denied and confirmed ordering execution-style street killings, but he has consistently said crime should be punished with death."

In Saturday's campaign speech, Duterte promised to "do just what I did as mayor" if elected. 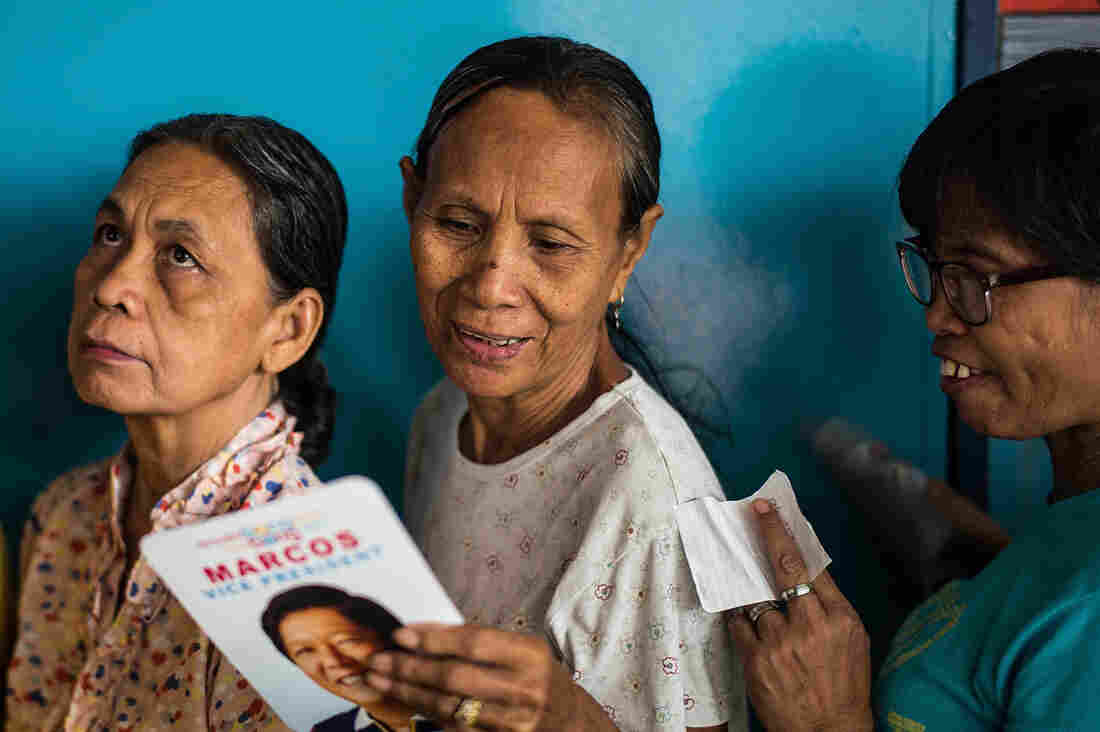 People stand in line to vote at a polling station on Monday in Manila. Lam Yik Fei/Getty Images hide caption

"You drug pushers, hold-up men and do-nothings, you better go out. Because ... I'd kill you," he said, according to The Guardian.

Supporters see Duterte as an alternative to politics-as-usual, Sullivan tells NPR's Renee Montagne: "The people here want a president who isn't one of the usual suspects — one not beholden to the oligarchs that hold so much power here."