Accessibility links
Hyperloop Futuristic Transportation System Has Its 1st Public Demo : The Two-Way Imagine a pod that can travel through a tube between San Francisco and Los Angeles in 30 minutes. Hyperloop One tested a piece of this technology in the Nevada desert on Wednesday. 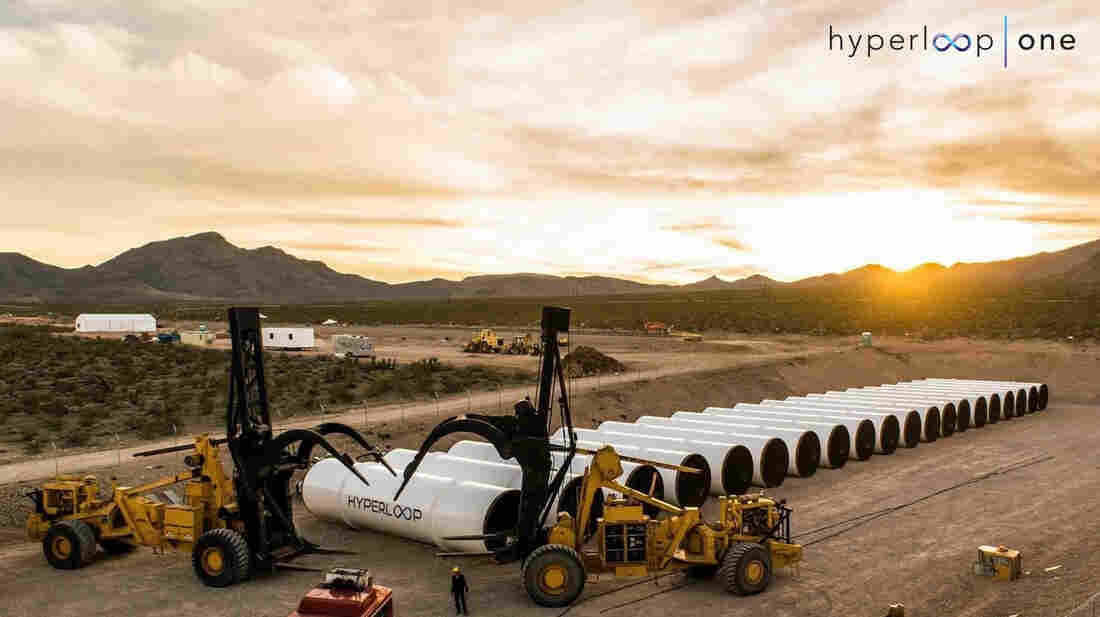 Tech startup Hyperloop One is trying to build a new mode of transportation that would involve pods moving at very high speeds through a tube. Hyperloop One hide caption 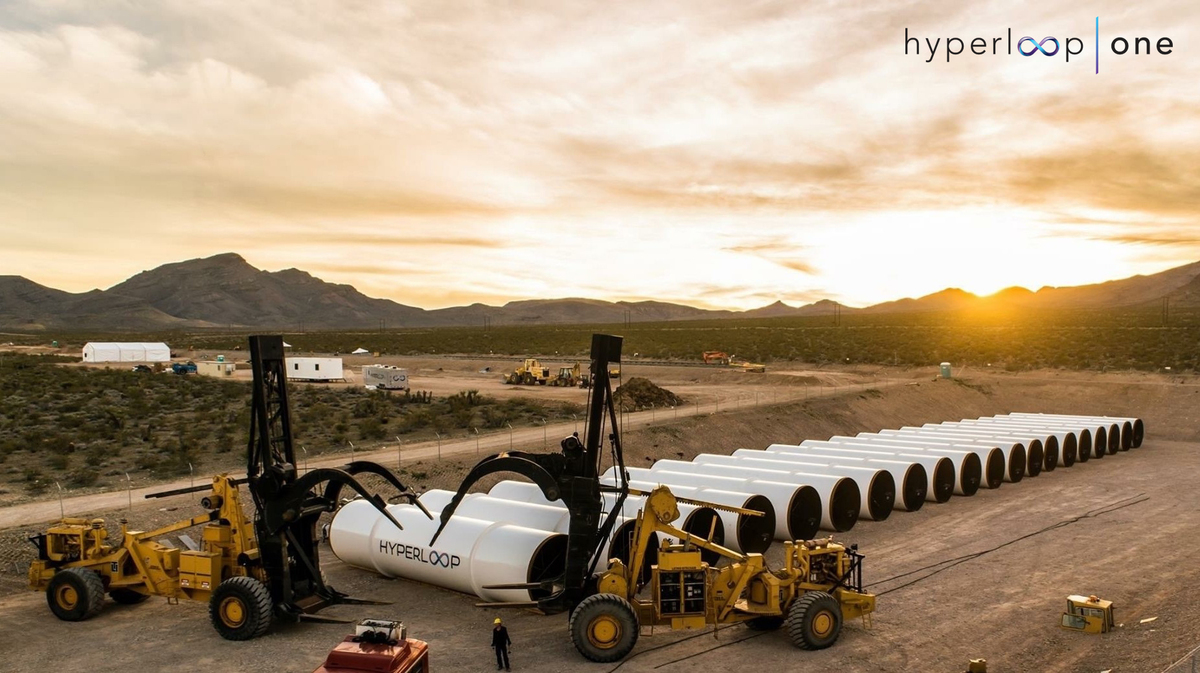 Tech startup Hyperloop One is trying to build a new mode of transportation that would involve pods moving at very high speeds through a tube.

Out in the Nevada desert today, the world got a good look at the first public test of the Hyperloop — a concept that could someday become a new mode of transportation.

Don't call it a Wright Brothers' "Kitty Hawk" moment just yet, though. The demo focused on only one piece of a very complicated system.

The Hyperloop, envisioned by Tesla and SpaceX founder Elon Musk, would move passenger-filled pods through special tubes at incredibly high speeds — as in possibly crossing the 400 miles between San Francisco and Los Angeles in a mere 30 minutes. Musk offered up his ideas in 2013, and others got to work trying to build it.

One of the startups that jumped at the challenge is Hyperloop One, formerly Hyperloop Technologies, tested its propulsion mechanism today. Take a look, via CNBC:

The 700 mph #Hyperloop just got one step closer to reality. @HyperloopOne held its first test run.https://t.co/7o3JcaL7f3

The Wall Street Journal wrote earlier in the day:

"The focus of the test will be more on the propulsion technology — whether it can actually move the sled — than the speed. The track is shorter and there will be air resistance, two slowing factors which will be eliminated in future tests."

On Tuesday, Hyperloop One announced new funding and new partners in transportation and engineering. One of those partners is Danish architect Bjarke Ingels. Gizmodo says that Ingels, known for big public infrastructure projects, "will give some much-needed design direction for how Hyperloop One's projects might start to integrate with the cities they're meant to serve." Gizmodo also has this statement from the architect:

"With hyperloop we are not only designing a futuristic station or a very fast train, we are dealing with an entirely novel technology with the potential to completely transform how our existing cities will grow and evolve, and how new cities will be conceived and constructed."

Hyperloop One CEO Rob Lloyd said in a statement that the company would work with these new partners "to redefine the future of transportation, providing a more immediate, safe, efficient and sustainable high-speed backbone for the movement of people and things." 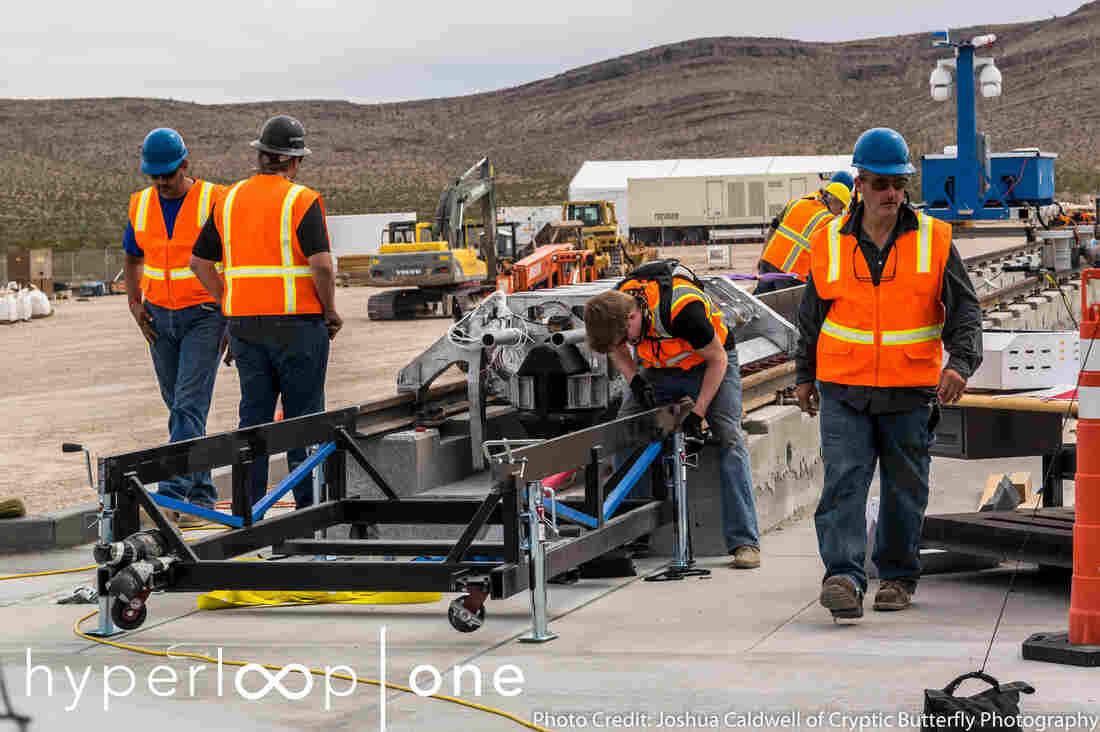 Hyperloop One tested a propulsion motor on a track, one component of the Hyperloop. Joshua Caldwell of Cryptic Butterfly Photography/Hyperloop One hide caption

So will any of this actually work? NPR's Elise Hu asked the question when Musk announced his idea almost three years ago. Electrical engineer Marc Thompson told her it seemed that it would. But that's not the end of the story, said the Worcester Polytechnic professor: "The devil's in the details in terms of testing, safety, passenger safety, egress, vibration, all that engineering stuff."

Former U.S. Department of Transportation Assistant Secretary Emil Frankel also had reservations, which he shared with Elise at the time.

"To talk about these kinds of leapfrogging technology in a context when we can't really adequately maintain our existing infrastructure is really not terribly realistic. At least not in terms of the public policy debate," Frankel said.

"We think we will be able to demonstrate full Kitty Hawk capabilities by the end of this year."