Accessibility links
Apple Invests $1 Billion In Chinese Ride-Hailing App : The Two-Way In China, Didi Chuxing dominates the ride-hailing market — despite Uber's attempts to break in. Now Apple Inc. is investing big in the service, ahead of a visit to China by Apple CEO Tim Cook. 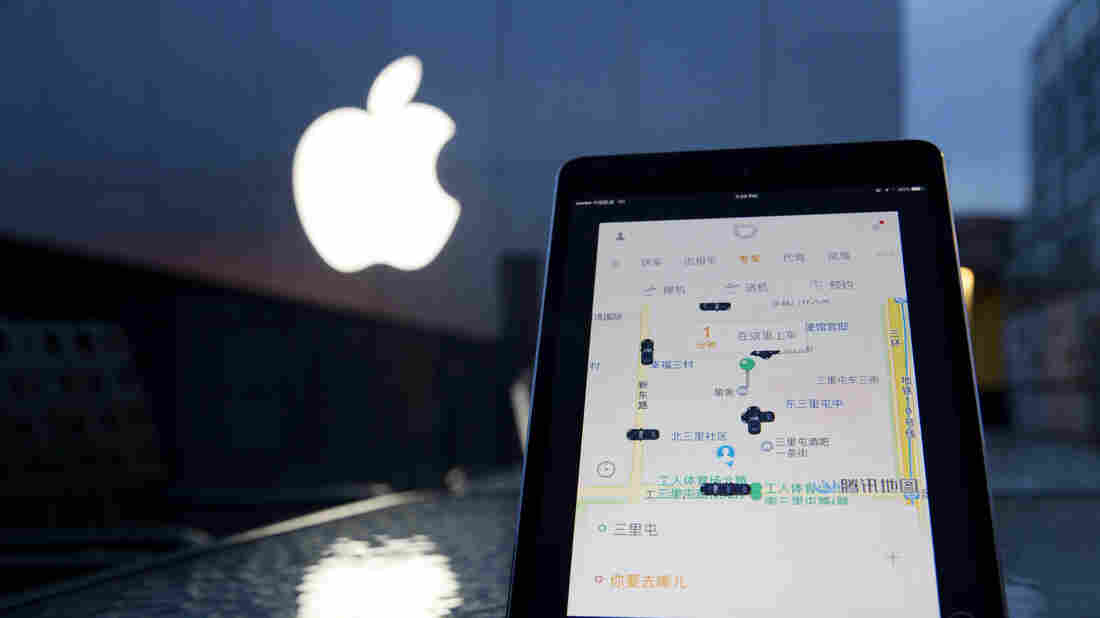 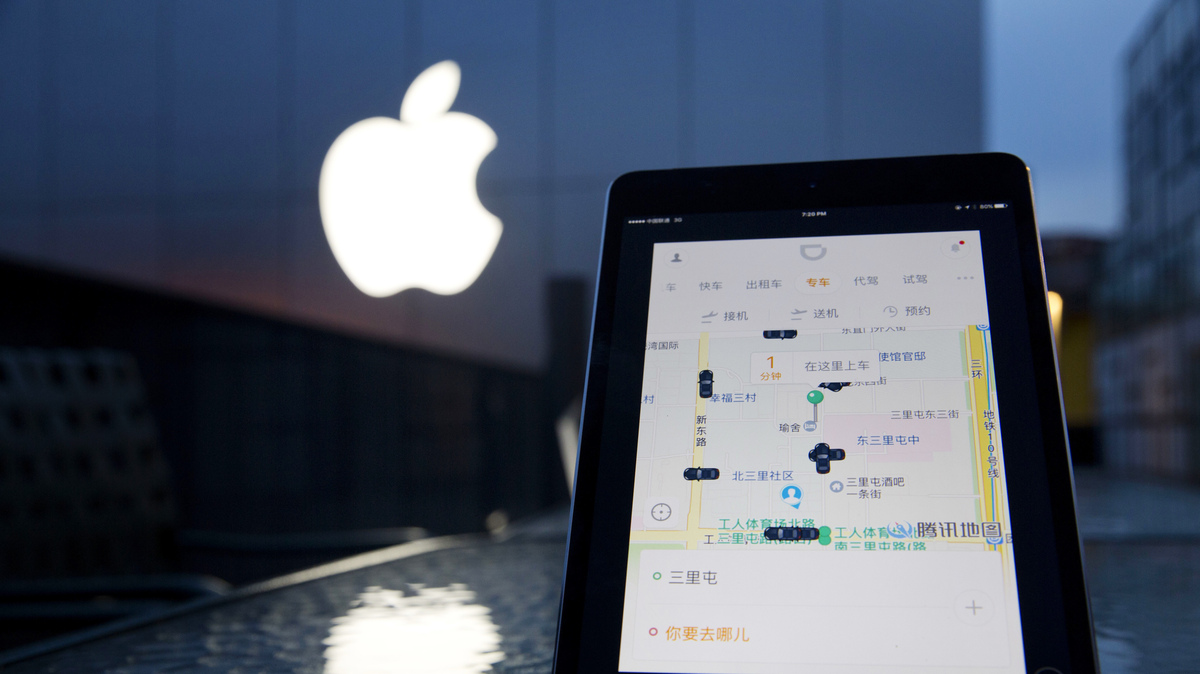 A mobile device displaying the Didi Chuxing app is posed near the Apple store logo in Beijing, China, on Friday.

It's a striking foray into the Chinese market — where Apple has recently faced strategic challenges — and a possible hint as to Apple's continued interest in the world of transportation. The company has widely been rumored to be working on self-driving cars.

Didi Chuxing, previously known as Didi Kuaidi, is a major competitor of Uber, which is spending big to try to break into China.

By investing in the company, Apple joins web giants Alibiba Group (an e-commerce company) and Tencent Holdings (a game and entertainment service), Didi Chuxing said in its announcement Friday. But Apple's investment is the single biggest infusion of cash in the company.

'A Chance To Learn More' About China

Apple has hit some trouble in the Chinese market recently.

Apple's Movies And Books Services Are Closed In China

Last month, as we reported on the Two-Way, China shut down Apple's movie and book stores on iTunes — after they'd only been open for about six months.

And in general, Apple is vulnerable to changes of heart in China, as NPR's Aarti Shahani reported two weeks ago. That's one reason billionaire investor Carl Icahn dropped his shares in Apple, Aarti said:

"Apple is really dependent on China. It's the second-largest market after the U.S., and Icahn says the Chinese government could suddenly change its mind, close the doors and make it very difficult for Apple to sell there," she explained.

Meanwhile, lower sales in China contributed to Apple's first revenue drop in more than a decade.

Apple CEO Tim Cook told Reuters that the company saw the investment in Didi Chuxing as "a chance to learn more about certain segments of the China market," as well as an opportunity to make a profit.

And analyst Ben Bajarin told the wire service that the move is also an investment in Apple's relationship with the Chinese government. Here's Reuters again:

" 'This is as much about sending signals about their seriousness in that country as it is about helping Didi build a ride-sharing platform,' [Bajarin] said.

"Didi Chuxing is a poster child for Chinese technology, a critical sector in Beijing's goal to shift the economy toward higher-value services.

Another industry expert, Mark Natkin, tells The New York Times that "making a sizable investment in a leading Chinese I.T. company will buy [Apple] a lot of good will."

Cook will be heading to China later this month on a high-profile visit.

What's Driving An Investment In Ride-Hailing?

Meanwhile, other industry-watchers were struck by the fact that the investment — the largest Apple has made since acquiring Beats Electronics in 2014 — was in a ride-hailing app.

Apple's potential interest in the transportation sector, particularly in self-driving cars, has been the topic of many rumors.

The Los Angeles Times reports on potential connections to cutting a deal with Didi Chuxing:

"Chinese analysts also speculate that Apple might be interested in tapping Didi's massive trove of data on ride-hailing and car usage to inform Apple's own development of a high-tech, self-driving car, which has long been rumored. Map services are another conceivable area of cooperation."

Cook told Reuters that, for now, when it comes to the car business, Apple was focused on the CarPlay system for linking smartphones to car dashboards.

"We will have to see what the future holds," he told the wire service.