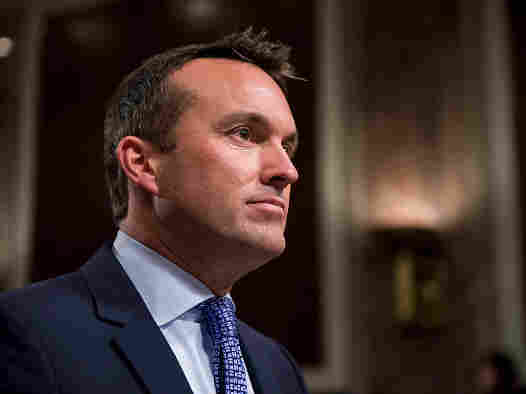 Eric Fanning testifies during the Senate Armed Services Committee hearing on his nomination to be secretary of the Army in January. His nomination was confirmed by the Senate Tuesday. Bill Clark/CQ-Roll Call/Getty Images hide caption 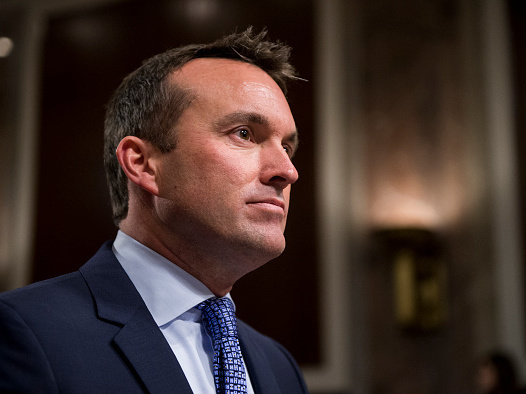 Eric Fanning testifies during the Senate Armed Services Committee hearing on his nomination to be secretary of the Army in January. His nomination was confirmed by the Senate Tuesday.

The Senate confirmed the nomination of Eric Fanning to the position of Army secretary, making him the first openly gay leader of a U.S. military service.

The confirmation comes eight months after President Obama nominated Fanning to the position.

"The voice vote approval Tuesday came after Sen. Pat Roberts, R-Kan., dropped his opposition to Fanning after a senior Pentagon official told him that no detainees held at Guantanamo Bay, Cuba, would be sent to the Army prison at Fort Leavenworth, Kansas, or other facilities in the United States," The Associated Press reports.

As the Two-Way previously reported, "Fanning has held numerous military posts in the Obama administration including special assistant to Secretary of Defense Ash Carter, acting secretary of the Air Force, and deputy undersecretary of the Navy."

"Eric brings many years of proven experience and exceptional leadership to this new role," Obama said in a statement when he nominated Fanning. "I am grateful for his commitment to our men and women in uniform, and I am confident he will help lead America's Soldiers with distinction. I look forward to working with Eric to keep our Army the very best in the world."

The Two-Way also reported on Fanning's experience with the Pentagon as an openly gay man:

"In a Defense Department statement in July, Fanning said he came out as gay in 1993 and talked about how attitudes at the DOD have changed in recent decades.

" 'There is a much larger community out there that is looking for opportunities to show its support of us — that's certainly been my experience as I've come out in my professional network, and it's picking up steam,' Fanning said. 'It's gone from tolerance to acceptance to embrace.'

"The nomination is the latest in a series of policy changes and appointments the Obama administration has made that advance the rights of LGBT people in the government. In addition to extending federal benefits to same-sex couples and repealing "don't ask, don't tell," which allowed gays to serve openly in the military, last month, Obama announced the hiring of the first openly transgender White House staffer."