Accessibility links
Mars Is Ready For Its Close-Up: Red Planet Easy To Spot This Weekend : The Two-Way During the "Mars opposition," which happens this Sunday, Mars will be closer to Earth than it has been for more than a decade. You can see it easily any night this weekend — no telescope necessary.

Mars Is Ready For Its Close-Up: Red Planet Easy To Spot This Weekend

Mars Is Ready For Its Close-Up: Red Planet Easy To Spot This Weekend 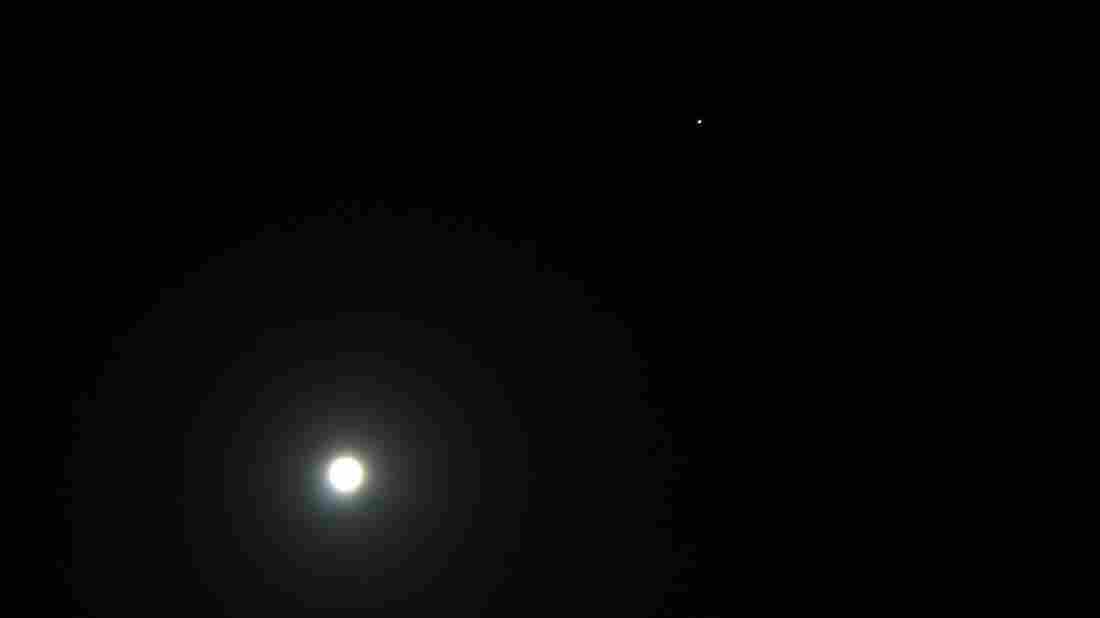 The moon and Mars, shown on Dec 24, 2007, during that year's Mars opposition. This year, Mars will be slightly closer to us than it was then but will look approximately the same — like a very bright, reddish star. Garrett Coakley/Flickr hide caption 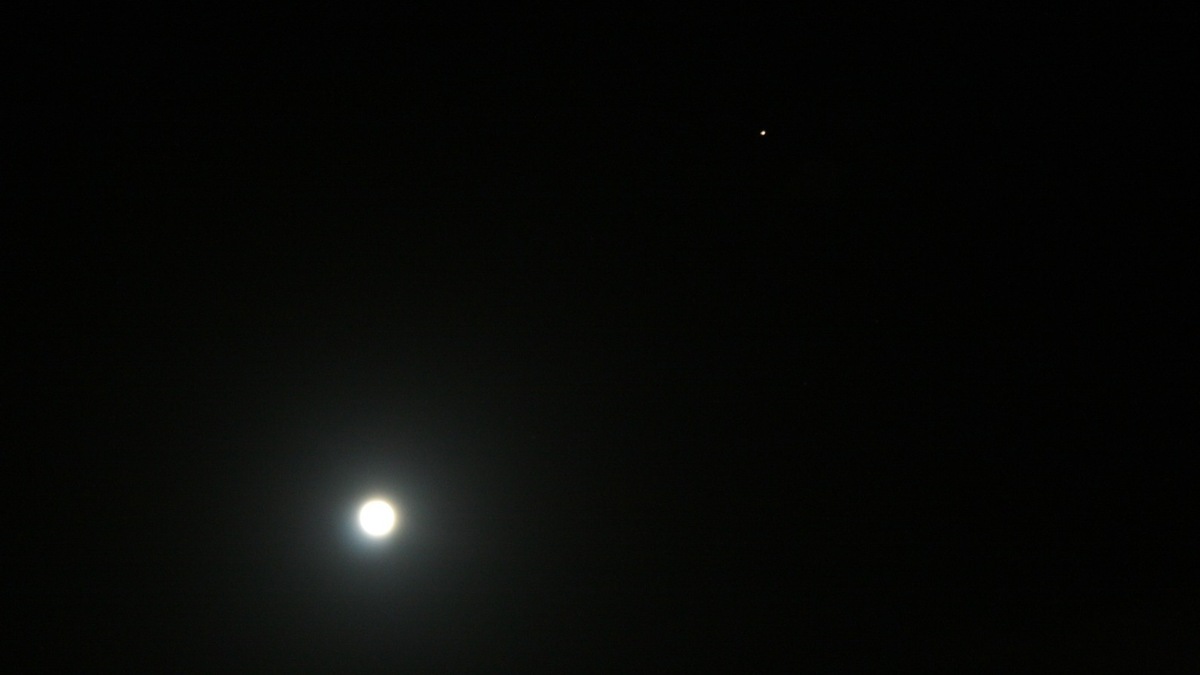 The moon and Mars, shown on Dec 24, 2007, during that year's Mars opposition. This year, Mars will be slightly closer to us than it was then but will look approximately the same — like a very bright, reddish star.

Sometimes astronomy can be challenging, but spotting Mars this weekend should be a breeze.

Step 1: Head outside right after sunset and look toward the southeastern sky.

Step 3: Look up and to the right, and find what looks like a bright red star.

That's Mars, our planetary neighbor — getting up close and personal.

This weekend is the "Mars opposition," when the planet shines most brightly; at the end of the month, in a related event, we'll have the "Mars close approach," when there's the shortest distance between the two planets.

The term "Mars opposition" is an old one, explains NASA scientist Michelle Thaller. It dates back to the days when astronomers had a more Earth-centric view of the universe.

During the Mars opposition early Sunday, Mars and the sun will be on opposite sides of Earth. When the sun is setting, Mars will be rising.

"The cool thing is, now that we understand that the Earth is a planet and that we're all going around the sun together, we know that it means that this is the closest Mars ever gets to us," Thaller says.

"And that means it's the best time to look at Mars from Earth. ... Mars is the largest we ever see."

That's still pretty small, she notes — the size of a star, not a large disc. (A recurring Internet hoax maintains that Mars sometimes gets as large as the moon, which, well, is a hoax.) But it'll be readily visible, near the moon all night long, and will be conspicuously bright for at least a week.

Mars opposition happens approximately every other year, although some years the planets are closer than others. The 2016 opposition event will be the closest the planets have been in more than a decade, EarthSky reports.

The Hubble Space Telescope took advantage of the proximity to turn its cameras — often focused at far-distant stretches of space — closer to home. 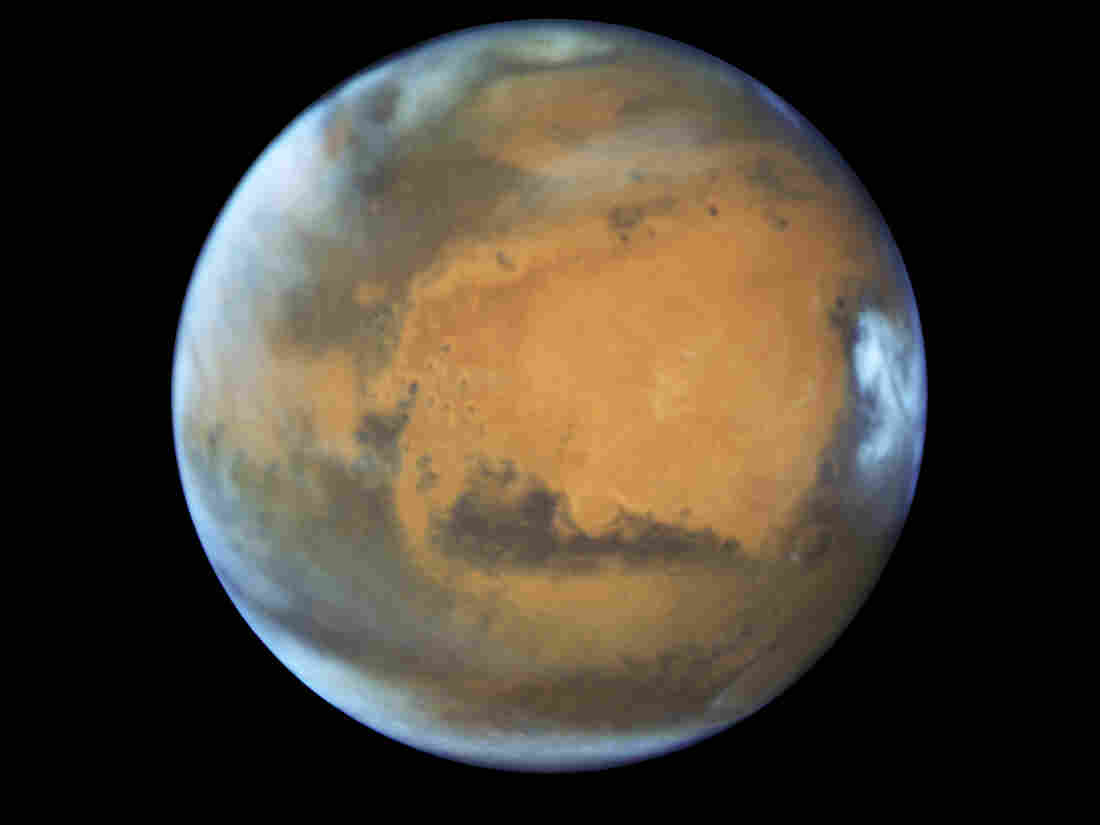 Mars, as photographed by the Hubble Space Telescope this month as Mars and Earth approached opposition. NASA hide caption 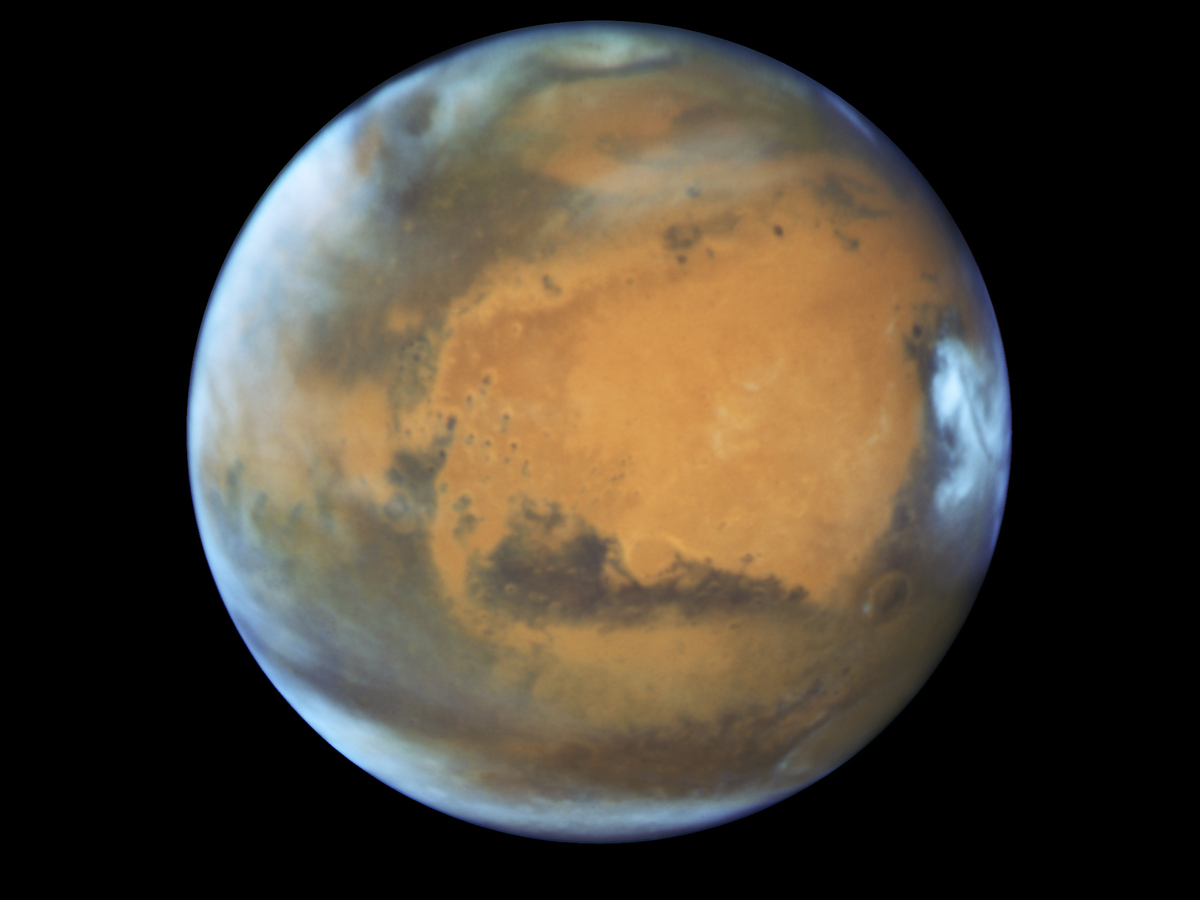 Mars, as photographed by the Hubble Space Telescope this month as Mars and Earth approached opposition.

The image includes a glimpse of Martian weather — clouds on the face of the planet — as well as noteworthy landmarks, NASA explains:

"The large, dark region at far right is Syrtis Major Planitia, one of the first features identified on the surface of the planet by seventeenth-century observers. Christiaan Huygens used this feature to measure the rotation rate of Mars. (A Martian day is about 24 hours and 37 minutes.) Today we know that Syrtis Major is an ancient, inactive shield volcano. Late-afternoon clouds surround its summit in this view.

"A large oval feature to the south of Syrtis Major is the bright Hellas Planitia basin. About 1,100 miles across and nearly five miles deep, it was formed about 3.5 billion years ago by an asteroid impact.

"The orange area in the center of the image is Arabia Terra, a vast upland region in northern Mars that covers about 2,800 miles. The landscape is densely cratered and heavily eroded, indicating that it could be among the oldest terrains on the planet. Dried river canyons (too small to be seen here) wind through the region and empty into the large northern lowlands.

"South of Arabia Terra, running east to west along the equator, are the long dark features known as Sinus Sabaeus (to the east) and Sinus Meridiani (to the west). These darker regions are covered by dark bedrock and fine-grained sand deposits ground down from ancient lava flows and other volcanic features. These sand grains are coarser and less reflective than the fine dust that gives the brighter regions of Mars their ruddy appearance. Early Mars watchers first mapped these regions."