Accessibility links
Report: U.S. Nuclear System Relies On Outdated Technology Such As Floppy Disks : The Two-Way The Government Accountability Office report also finds that the nuclear system is coordinated on a 1970s-era computer. The parts are so obsolete that it's difficult to find replacements. 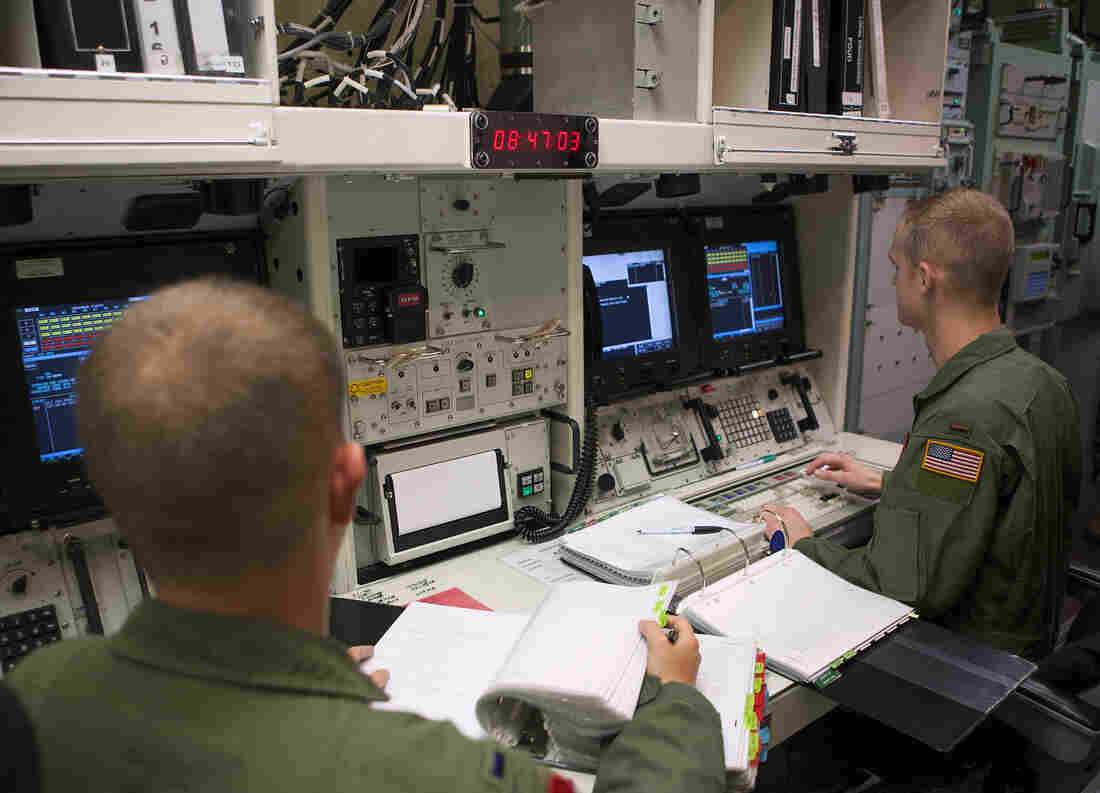 Members of the 320th Missile Squadron missile combat crew work through a scenario in the 90th Operations Support Squadron's Missile Procedure Trainer on F.E. Warren Air Force Base, Wyo., in June 2014. The MPT is a simulator that allows missile crews to practice contingencies they might face while on alert. R.J. Oriez/U.S. Air Force hide caption 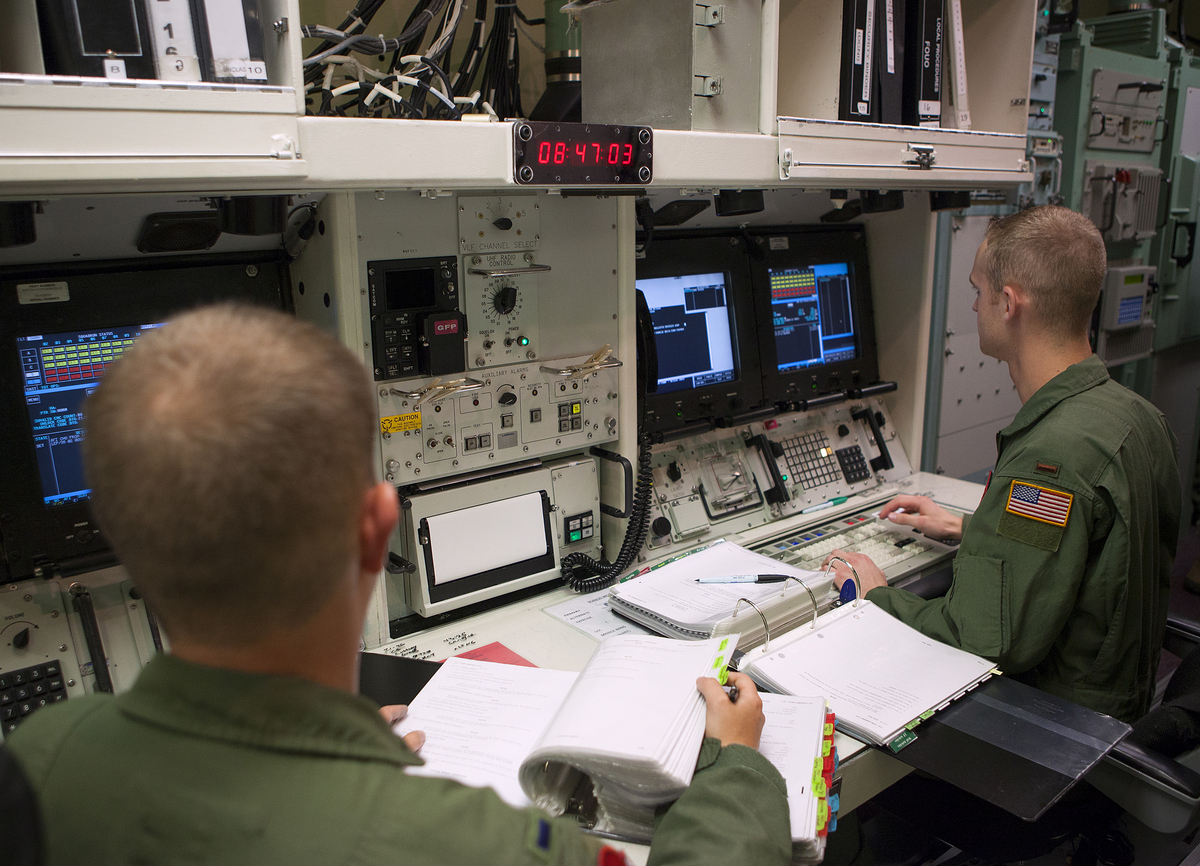 Members of the 320th Missile Squadron missile combat crew work through a scenario in the 90th Operations Support Squadron's Missile Procedure Trainer on F.E. Warren Air Force Base, Wyo., in June 2014. The MPT is a simulator that allows missile crews to practice contingencies they might face while on alert.

The U.S. nuclear weapons system still runs on a 1970s-era computing system that uses 8-inch floppy disks, according to a newly released report from the Government Accountability Office.

That's right. It relies on memory storage that hasn't been commonly used since the 1980s and a computing system that looks like this: 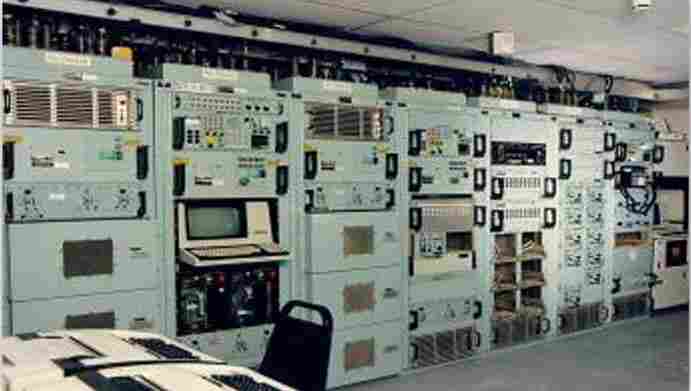 Beyond the nuclear program, much of the technology used by the federal government is woefully outmoded, the report says. About 75 percent of the government's information technology budget goes toward operations and maintenance, rather than development, modernization and enhancement.

The GAO report found that the Pentagon's Strategic Automated Command and Control System — which "coordinates the operational functions of the United States' nuclear forces, such as intercontinental ballistic missiles, nuclear bombers, and tanker support aircrafts" — runs on an IBM Series/1 Computer, first introduced in 1976.

The system's primary function is to "send and receive emergency action messages to nuclear forces," the report adds, but "replacement parts for the system are difficult to find because they are now obsolete."

"This system remains in use because, in short, it still works.

"However, to address obsolescence concerns, the floppy drives are scheduled to be replaced with Secure Digital devices by the end of 2017. Modernization across the entire Nuclear Command, Control, and Communications (NC3) enterprise remains ongoing."

The report also found that the Treasury Department uses 1950s-era assembly language code (which it says is "a low-level computer code that is difficult to write and maintain") on the individual master file ("the authoritative data source for individual taxpayers where accounts are updated, taxes are assessed, and refunds are generated.") The report adds that the department has no firm plans to modernize the system.

Likewise, the Social Security Administration relies on COBOL ("a programming language developed in the late 1950s and early 1960s") to determine retirement eligibility and amounts, according to the report. However, there are "ongoing modernization efforts" at the agency.

For years, the U.S. nuclear program has faced "low morale, understaffing and equipment shortages," NPR's Geoff Brumfiel has reported. He said that in 2014, reports came to light that "three nuclear bases had only one special wrench that's needed to put nuclear warheads on missiles." They had to share the wrench between bases — but apparently each base later got its own wrench.

At the time, Geoff pointed out some of the complications that come with a major weapons system "constantly on alert, but ... very unlikely [to ever] be used":

"Frankly, it's easy for the leadership to forget about the missiles and the people responsible for them. And it's easy for those people to sort of get bored and get themselves into trouble. On top of all this, we have a much bigger problem coming down the road. The weapons themselves are aging. The submarines, the bombers, the missiles — they're all going to have to be replaced."

You can read the full GAO report here: