Accessibility links
Shoulder Patches Spark A Diplomatic Flap Between Turkey And The U.S. : The Two-Way The central issue: the Kurdish YPG militia, which the U.S. views as a key ally against the Islamic State in Syria, has been branded a terrorist organization by Turkey's government. 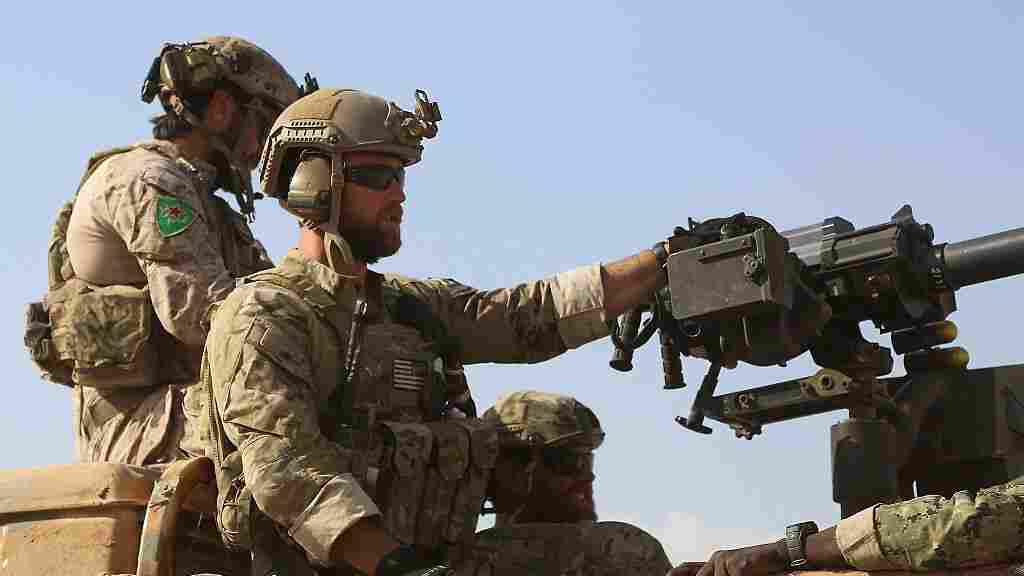 Armed men in uniform identified by Syrian Democratic forces as U.S. special operations forces ride in the back of a pickup truck in the village of Fatisah in the northern Syrian province of Raqqa on Wednesday. Delil Souleiman /AFP/Getty Images hide caption 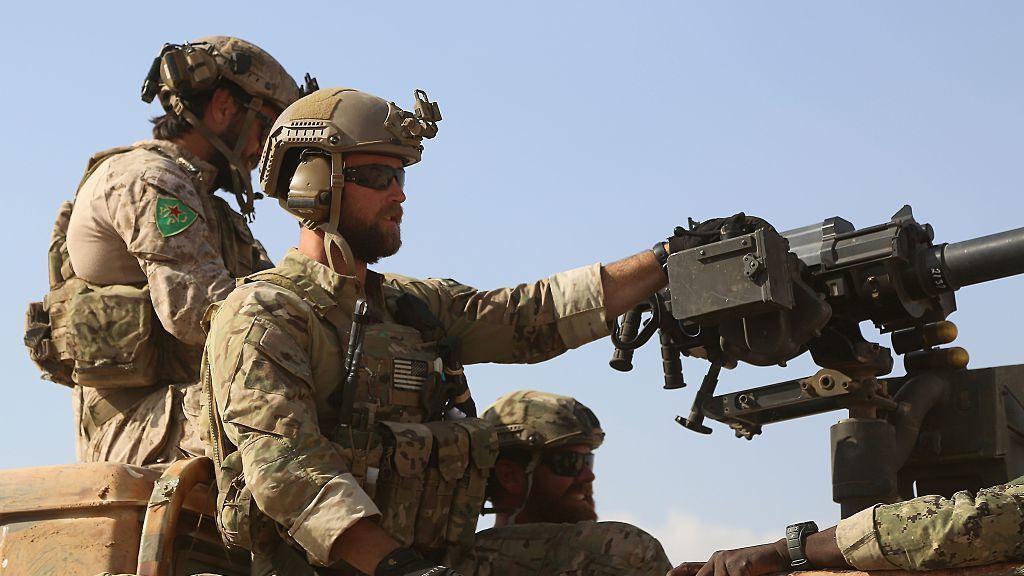 Armed men in uniform identified by Syrian Democratic forces as U.S. special operations forces ride in the back of a pickup truck in the village of Fatisah in the northern Syrian province of Raqqa on Wednesday.

Shoulder patches are the subject of a diplomatic incident between the U.S. and Turkey. The flap highlights the complicated regional politics the U.S. is navigating in its offensive against Islamic State militants in Syria.

The central issue: the Kurdish YPG militia, which the U.S. views as a key ally against the Islamic State in Syria, has been branded a terrorist group by Turkey's government.

Earlier this week, U.S.-backed forces pushed forward in an area north of Raqqa, the de facto IS capital in Syria, as we reported. The Syrian Democratic Forces are supported by U.S. military advisers on the ground, and the Kurdish YPG is the coalition's most powerful component.

The photographer, Delil Souleiman, wrote in a blog post published by AFP that he came upon the group of U.S. military personnel by chance near the frontline, about 30 miles from Raqqa:

"They don't prevent me from taking pictures. They don't seem to think that a photographer here is something bizarre. Some have a patch of them American flag on their sleeves. Others have the patch of a Kurdish People's Protection Units (YPG). Still others of a women's unit within the YPG."

The photos set off a barrage of fiery words from Turkish officials.

"Wearing an insignia of a terrorist organization by U.S. soldiers, who are our ally and are assertive about fighting against terrorism, is unacceptable," Turkey's Foreign Minister Mevlut Cavusoglu said, according to the Anadolu Agency.

"Our suggestion to them is that they should also wear Daesh, al-Nusra and Al-Qaeda insignias during their operations in other regions of Syria. They can also wear the Boko Haram insignia when they go to Africa," he added.

Following Turkey's criticism, coalition spokesman Army Col. Steve Warren said during a press briefing Friday that wearing the patches "was unauthorized and it was inappropriate and corrective action has been taken." That fact has been "communicated to our allies," he added.

But Warren explained that it is common practice for U.S. special forces to wear this kind of patch during military partnerships, even though they are unauthorized:

"[T]he special forces community has a long and proud history of wearing such patches when they are partnering with forces around the world, and you'll see examples of that in Afghanistan, in Iraq, in Latin America and all over the world where these special forces personnel train and conduct, you know, foreign internal defense type operations. This is something that they often do, and it's an effort to, you know, just kind of connect with those that they're training."

Turkish President Recep Tayyip Erdogan reiterated criticism of the patches Saturday and accused the U.S. of not being "honest," according to The Associated Press. He added: "Those who are our friends, those who are with us in NATO, should not and cannot send their soldiers to Syria with the sign of the YPG."

As the Los Angeles Times explains, "Turkey maintains the YPG is no different from the Kurdistan Workers Party (PKK), which Ankara and Washington regard as a terrorist organization."

In a Friday press briefing, State Department spokesman Mark Toner told reporters that "our belief is that the YPG is not connected to the PKK." However, he later said, "I can't categorically say that there's not any connections." He added that the YPG is "taking the fight to Daesh in northern Syria and is a very effective fighting force."