Accessibility links
World Health Organization Dismisses Calls To Move Or Postpone Rio Olympics : The Two-Way "[C]ancelling or changing the location of the 2016 Olympics will not significantly alter the international spread of Zika virus," WHO says, after scientists called for the Games to be moved. 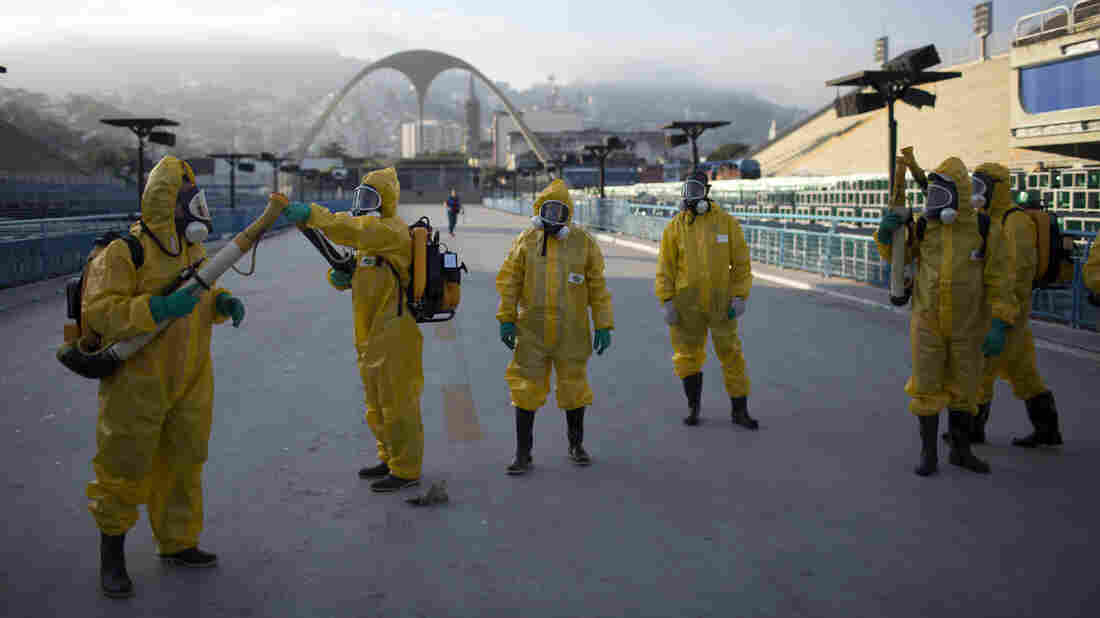 Health workers get ready to spray insecticide to combat the Aedes aegypti mosquitoes that transmits the Zika virus in January, under the bleachers of the Sambadrome in Rio de Janeiro, which will be used for the Archery competition in the 2016 summer games. Leo Correa/AP hide caption 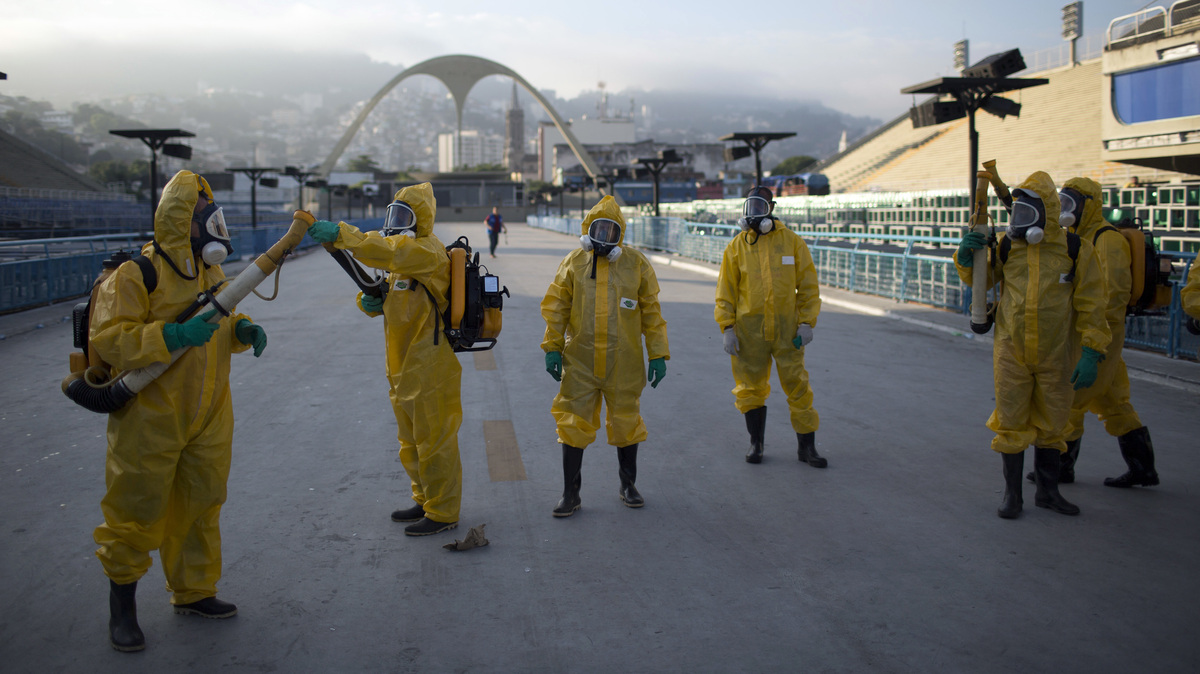 Health workers get ready to spray insecticide to combat the Aedes aegypti mosquitoes that transmits the Zika virus in January, under the bleachers of the Sambadrome in Rio de Janeiro, which will be used for the Archery competition in the 2016 summer games.

The World Health Organization is trying to ease concerns about spreading Zika as a result of this summer's Olympics in Rio de Janiero.

"Based on current assessment, cancelling or changing the location of the 2016 Olympics will not significantly alter the international spread of Zika virus," a statement released Saturday reads.

This comes a day after more than 150 scientists released an open letter to the head of WHO calling for the games to be moved or postponed, citing new research. "We make this call despite the widespread fatalism that the Rio 2016 Games are inevitable or 'too big to fail,'" the letter says. Here's more:

"An unnecessary risk is posed when 500,000 foreign tourists from all countries attend the Games, potentially acquire the strain, and return home to places where it can become endemic. Should that happen to poor, as-yet unaffected places (e.g., most of South Asia and Africa) the suffering can be great. It is unethical to run the risk, just for Games that could proceed anyway, if postponed and/or moved." 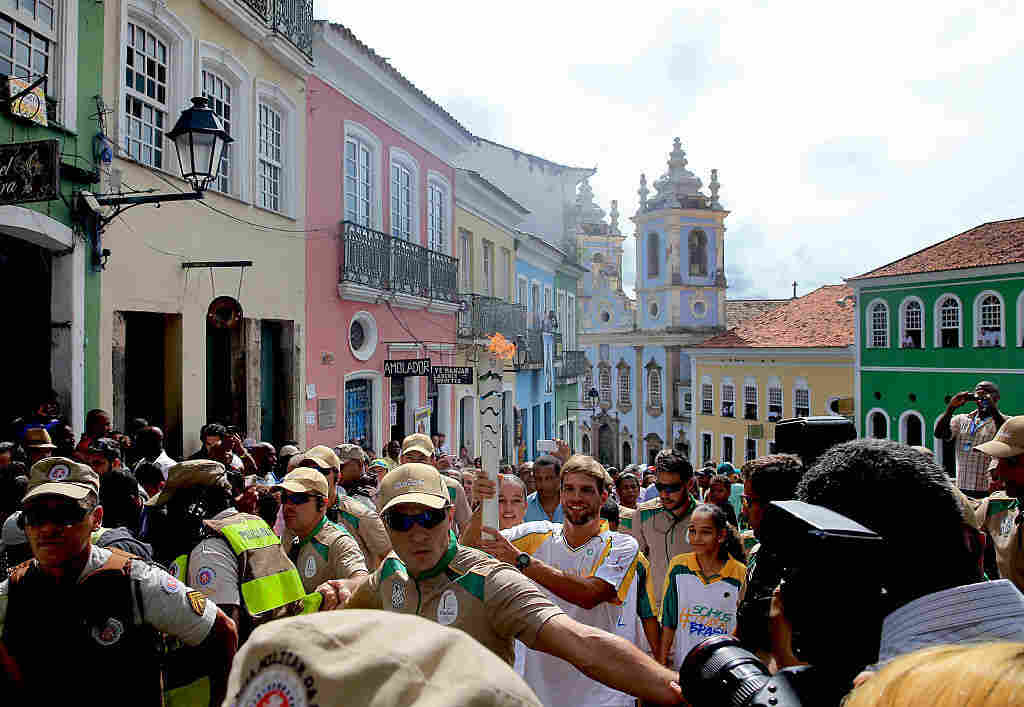 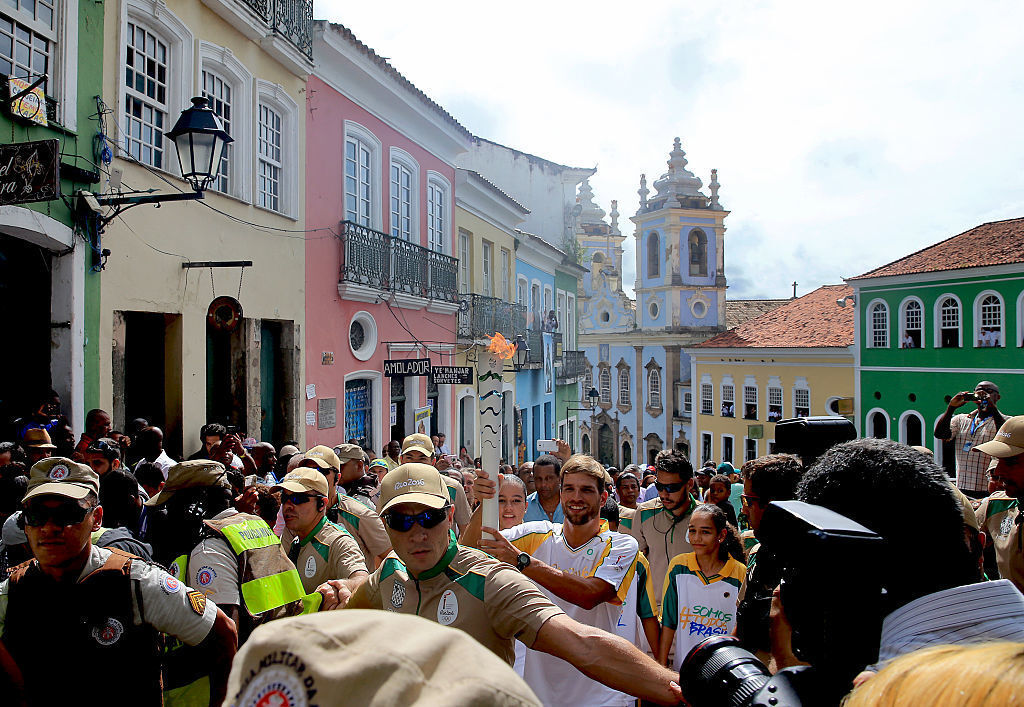 The Paralynpic Athlete, Marcelo Collet, on Tuesday in Salvador, Brazil.

It called on WHO to conduct a new assessment of its recommendations regarding Zika and the games, citing concerns about the medical consequences of the strain of the virus found in Brazil.

Public Health Professor: Because Of Zika, Rio Olympics 'Must Not Proceed'

The Olympics are set to start in just 69 days and as The Guardian noted, the Olympic torch is already touring Brazil on its way to the opening ceremonies.

"The fire is already burning, but that is not a rationale not to do anything about the Olympics," said Amir Attaran, a University of Ottawa professor and one of the letter's four co-authors, told The Guardian. "It is not the time now to throw more gasoline on to the fire."

Instead Of A Moment In The Sun, Brazil Faces A Perfect Storm

Attaran recently published a commentary for the Harvard Public Health Review and spoke with All Things Considered about his controversial position. "[T]he odds are extremely high that somebody will take the disease elsewhere and seed a new outbreak," he said.

As the WHO states, "based on the current assessment of Zika virus circulating in almost 60 countries globally and 39 countries in the Americas, there is no public health justification for postponing or cancelling the games." It advises people coming for the games to follow public health advice, like guarding against mosquito bites and practicing safe sex.

The new letter from the scientists "will cause a fresh headache for Brazilian government officials and Olympic organisers, who have repeatedly insisted the Games can go ahead safely as long as athletes and visitors smother themselves in insect repellent to minimise the risks from the mosquito-borne disease," as The Guardian reports.

Brazil's president is facing impeachment proceedings and the country is in the middle of an economic recession.

According to Reuters, the International Olympic Committee says it was not consulted on the WHO's response. The wire service adds that the IOC "has repeatedly said the virus would not pose a threat to the Games."