Accessibility links
'Trump University' Documents Put On Display Aggressive Sales Techniques : The Two-Way They say no cash is no reason to let potential students off the hook: "They will find the money." The documents, part of a lawsuit alleging fraud, recommend treating reporters with courtesy. 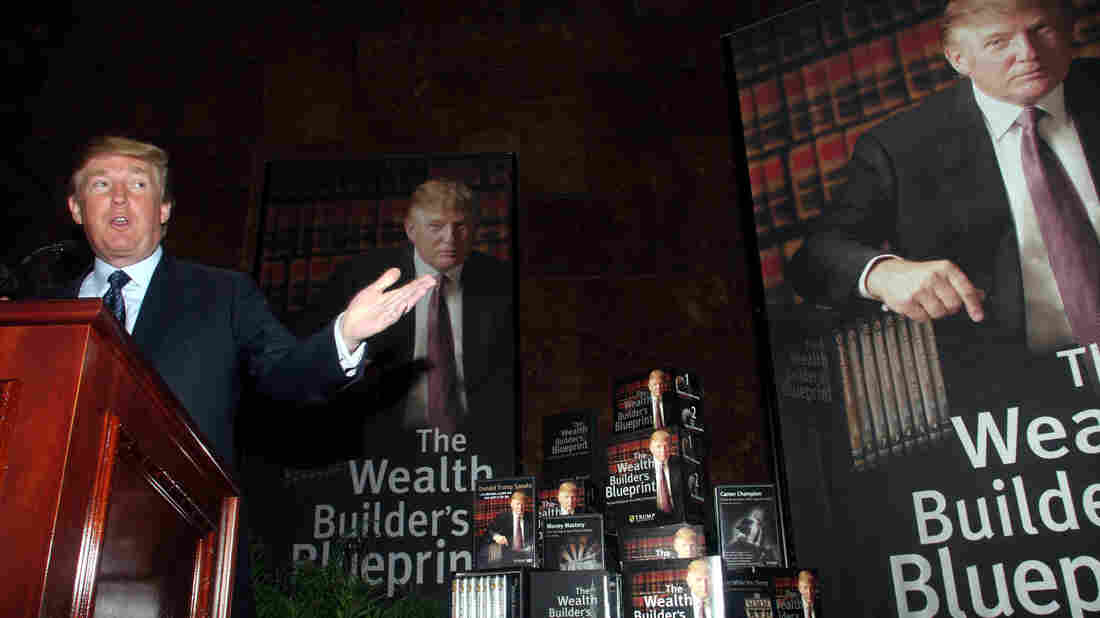 In 2005, Donald Trump announced the establishment of Trump University, a collection of online and in-person courses that promised to impart real estate investment skills. Lawsuits over the venture resulted in the release of confidential internal documents Tuesday. Thos Robinson/Getty Images hide caption 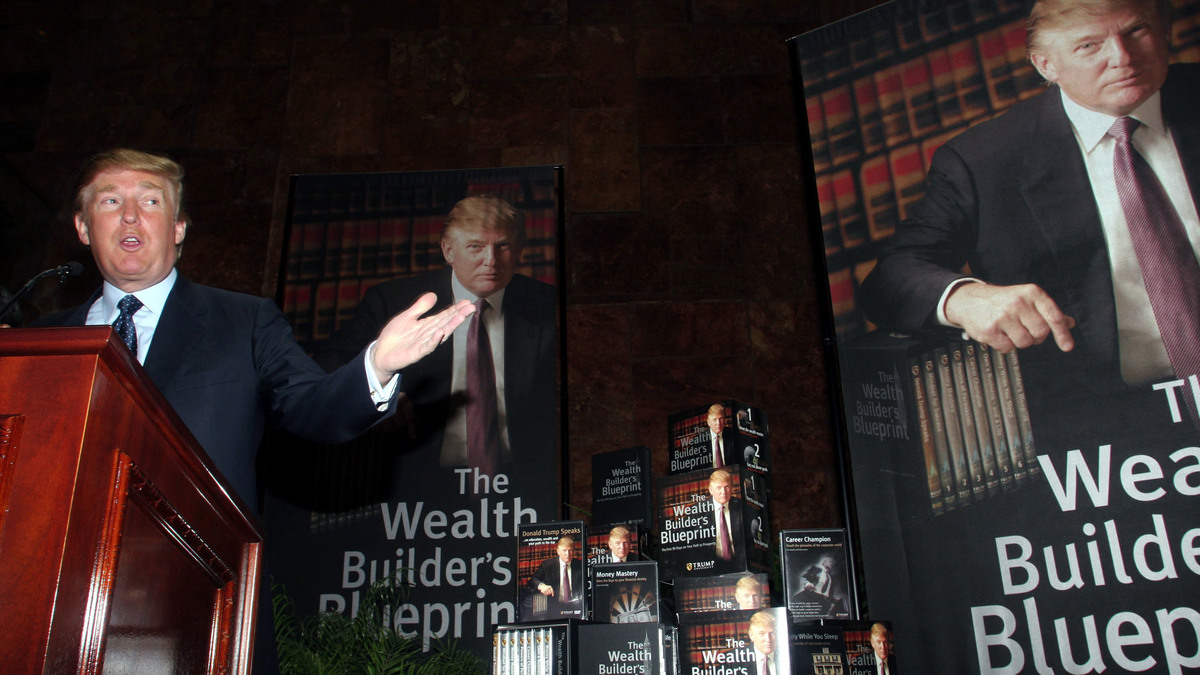 In 2005, Donald Trump announced the establishment of Trump University, a collection of online and in-person courses that promised to impart real estate investment skills. Lawsuits over the venture resulted in the release of confidential internal documents Tuesday.

A federal judge released hundreds of pages of court documents Tuesday related to Trump University, Donald Trump's real estate and investment training venture that has sparked lawsuits from former students. The records include a careful guide to selling — and to dealing with reporters.

The documents were released in response to a request from The Washington Post. After their release today, the newspaper's Tom Hamburger took a break from looking through the records to describe them to NPR's Ari Shapiro.

Many of the court documents, Hamburger says, can be split into two basic categories: depositions from Trump executives, and "playbooks" — essentially, marketing and strategy plans for selling courses and mentoring sessions to students, often with an emphasis on finding takers for the "Gold" level courses that cost nearly $35,000. 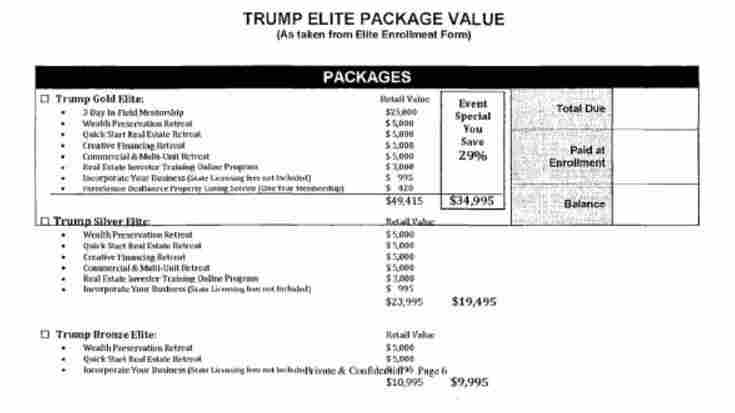 An image from court documents related to lawsuits against Trump University, depicting the nearly $35,000 cost of the "Gold" level package. NPR hide caption 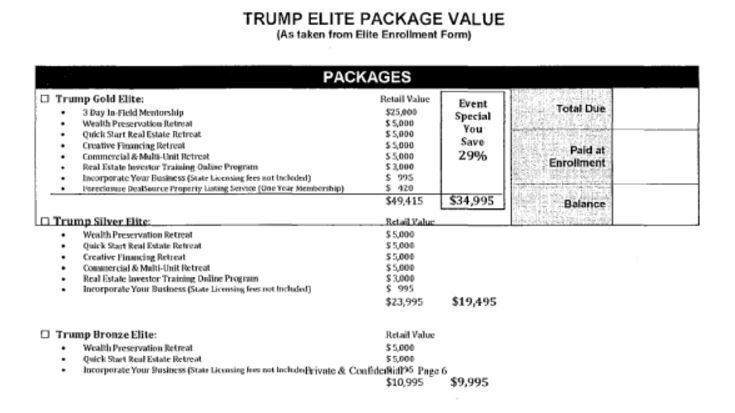 An image from court documents related to lawsuits against Trump University, depicting the nearly $35,000 cost of the "Gold" level package.

The Trump University documents' topics range from how employees should file expense reports to guides for making sales in various environments, from one-off preview events to three-day sessions. Nearly all of the pages are marked "Confidential."

Tips for dealing with the news media are included in the 2008 edition of the playbook, starting with the idea that any reporters should be directed to a Trump media contact. The reminder "courtesy gets you a long way" is also among the tips:

The playbooks were publicly released on the same day that Trump, the presumptive Republican presidential nominee, called ABC News reporter Tom Llamas "a sleaze" during a news conference, prompting CNN to declare, "Donald Trump's criticism of the media has reached Nixonian levels — only Trump isn't doing the name-calling in private."

Representing several years' worth of sales playbooks, the guides also include Trump employees' suggested responses to customers who balk at a sale, offering rebuttals to objections that range from a need to consult a spouse to a reluctance to go into debt.

Another tip in the venture's 2010 Playbook requires sales staff to "Be Deliberate." Here's that paragraph:

"Be deliberate and conscious when communicating to potential students. Remember that we have time to think and plan and develop questions and commands that lead people into a flow that they must deal with and respond to. Without a game plan you are required to respond to them and do much more thinking on your feet. Remember that we need to stay on 'offense.' "

The playbook also urges Trump's sales teams not to let a lack of money be used as an excuse for turning down Trump University's three-day training.

"Money is never a reason for not enrolling in Trump University," the sales guide states, adding, "if they really believe in you and your product, they will find the money."

The documents and records were ordered to be released by U.S. District Judge Gonzalo Curiel of the Southern District of California, who has come under personal attack from Donald Trump.

"Trump, who previously questioned whether Curiel's Hispanic heritage made him biased due to Trump's support for building a wall on the Mexican border, said Friday that Curiel 'happens to be, we believe, Mexican.' Trump called the judge a 'hater of Donald Trump' who had 'railroaded' him in the case."

Here's a sampling of the full documents:

The documents stem from lawsuits filed by Trump University's customers back in 2013; their case gained new prominence back in February, when Trump's Republican rival Marco Rubio brought them up during a debate.

After that debate, Michael Isikoff, the chief investigative correspondent for Yahoo! News, spoke to NPR's Robert Siegel about the former students' complaints against Trump. From the transcript:

"ISIKOFF: Well, he's being accused of running a sham, a financial fraud. Basically, the former students who are suing claim they plunked down a chunk of change, in some cases maxing out their credit card to the tune of $36,000, to attend these seminars and then receive mentoring by Donald Trump's hand-picked real estate experts, who would help them make a killing in the real estate market.

"SIEGEL: Hand-picked experts was a phrase in the promotional literature.

"ISIKOFF: Exactly. Many of the accusations revolve around the fact that these supposed experts had little expertise in real estate, had little do with Donald Trump and, in fact, offered advice that was either perfunctory or, in some cases, just didn't happen.

"ISIKOFF: Absolutely. He spoke at these seminars. There were huge portraits of him. He promoted the school heavily. And according to accusations, actually, in another lawsuit brought by New York Attorney General Eric Schneiderman, he actually pocketed something like $5 million in profits from the school. So this was very much a part of Donald Trump enterprises."