Accessibility links
New U.S. Ban On Ivory Sales To Protect Elephants : The Two-Way New regulation will ban almost all sales of African elephant ivory in the U.S. The changes will allow sale and transport of musical instruments, guns and other items made with small amounts of ivory. 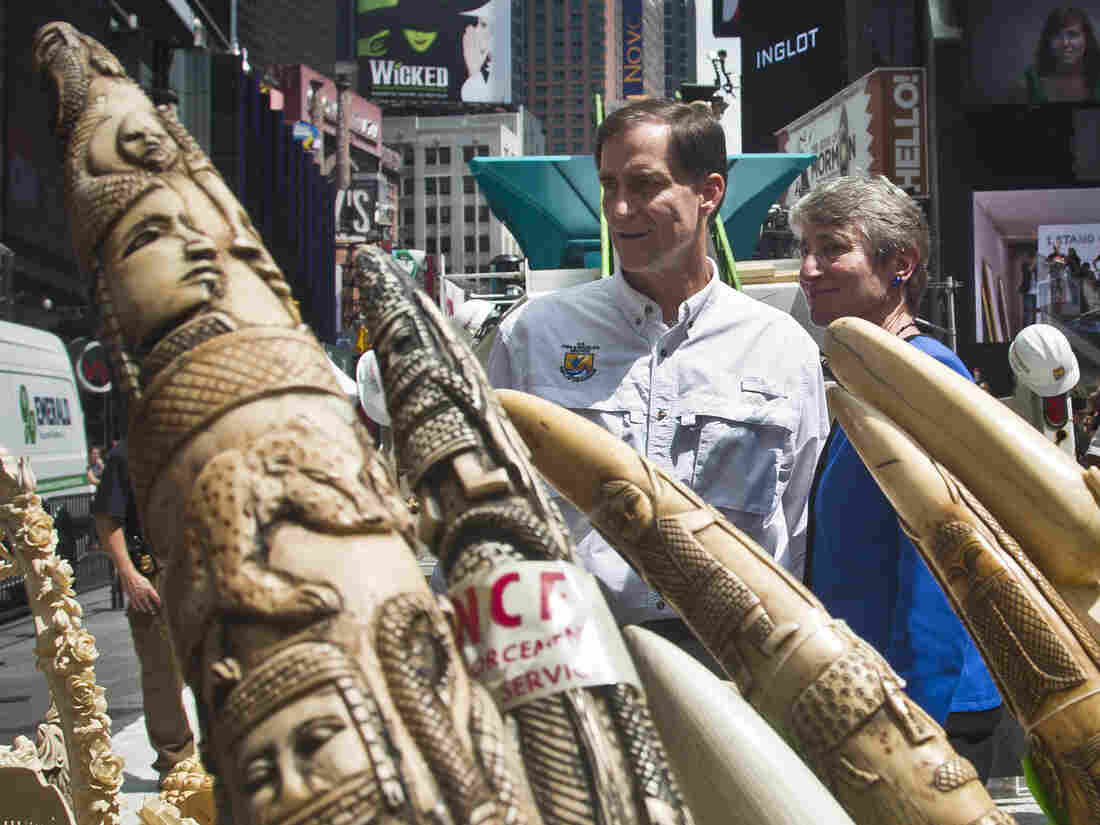 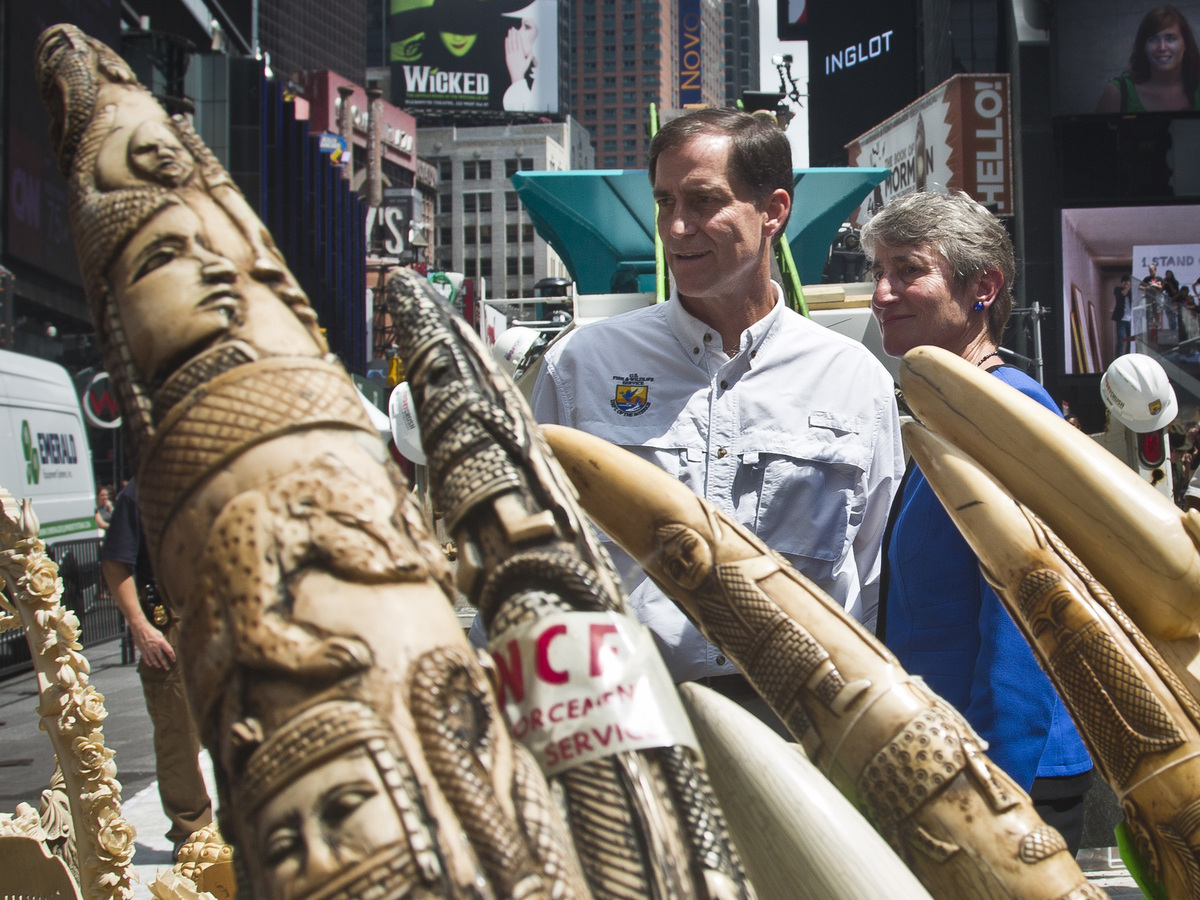 The federal government is moving to ban virtually all sales of items containing African elephant ivory within the U.S. For a long time it's been illegal to import elephant ivory. This new rule extends the ban to cover ivory that's already here.

The new regulations come out of the U.S. Fish and Wildlife Service, which says the move will further limit the market for traffickers of illegal ivory. They say the problem is that smugglers currently can evade detection and bring illegal ivory into the U.S. Once here, it's impossible for people to know whether that billiard cue or pocket knife they're buying was made with sanctioned or illegal ivory.

Research by wildlife protection groups has found that the U.S. is one of the largest markets for illegal ivory. So under the new system, officials hope that the near-total ban on sales will largely shut down the U.S. as a buyer of the illegal ivory. 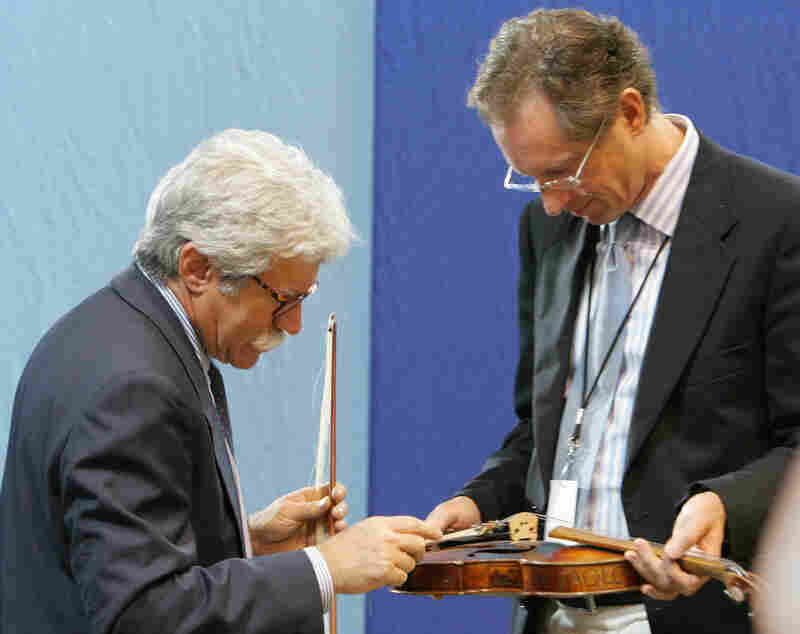 Appraisers Fred Oster (left) and David Bonsey, review a 1920 French violin at an Antiques Roadshow event in Los Angeles in 2005. Many stringed instruments throughout history have been made using small amounts of ivory. Kim D. Johnson/AP hide caption

"Today's bold action underscores the United States' leadership and commitment to ending the scourge of elephant poaching and the tragic impact it's having on wild populations," said Secretary of the Interior Sally Jewell.

Of course, any regulation can have unintended consequences. And one group that you might not expect to be worried about this is The League of American Orchestras. It turns out that many professional musicians play stringed instruments that have pieces of ivory used in their construction, for example ivory tuning pegs. Some antique violins and cellos are quite valuable both in terms of their price tags and their value to the musicians who play them. So the orchestra association says it worked with the Obama administration to craft the new regulations in a way that will allow for the sale and interstate transport of such instruments.

There are also some other limited exemptions for bona fide antiques and items with small amounts of ivory that federal regulators say are not "drivers of poaching."

The move is part of a broader effort by the Obama administration. In 2013, the president issued an executive order on combating wildlife trafficking. The government has the authority to regulate ivory sales under the Endangered Species Act.

Up In Flames: Kenya Burns More Than 100 Tons Of Ivory

The administration is encouraging other nations to follow suit. China is another very large market for illegal ivory. And the new regulations were announced ahead of a trip to China by Secretary of State John Kerry and Treasury Secretary Jack Lew.

The National Rifle Association is opposed to the new regulations. A statement on the NRA website that appears underneath a photo of an antique ivory-handled pistol reads:

"While the NRA supports efforts to stop poaching and the illegal trade of ivory, these proposals would do nothing to protect elephants in Africa and Asia, but would instead make sellers of legal ivory potential criminals overnight, as well as destroy the value of property held by countless gun owners, art collectors, musicians and others."

Regulators, though, say they have carved out protections for gun owners. U.S. Fish and Wildlife Service Director Dan Ashe said in a statement:

"We listened carefully to the legitimate concerns raised by various stakeholder groups and, as a result, are allowing commonsense, narrow exceptions for musicians, musical instrument makers and dealers, gun owners and others to trade items that have minimal amounts of ivory and satisfy other conditions."

Regulators say they will provide additional implementation guidance on the rule before it goes into effect on July 6 of this year.