Accessibility links
Tea, Pride, Mystery: For One Family That Fled The Nazis, A Tin Canister Held It All : The Two-Way Last month, we reported on a mug that hid jewelry from Nazi eyes. Now a family shares their own story of a tea canister carried from Poland to Siberia to America — with the possibility of gold inside.

Last month, the Two-Way reported on a discovery at Auschwitz: a mug that held a gold ring and necklace, painstakingly hidden from the Nazis and concealed for 70 years. The museum was unable to determine the owner of the jewelry.

A reader emailed soon after.

"I want to share a story of a similar object," Sabina Rak Neugebauer wrote. "But in this case I know a lot about the people the object belonged to." We called Sabina and her mother, Eda Rak, to hear the story of Sabina's grandparents and their tea canister. 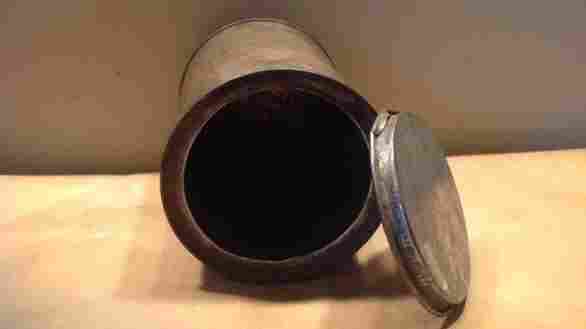 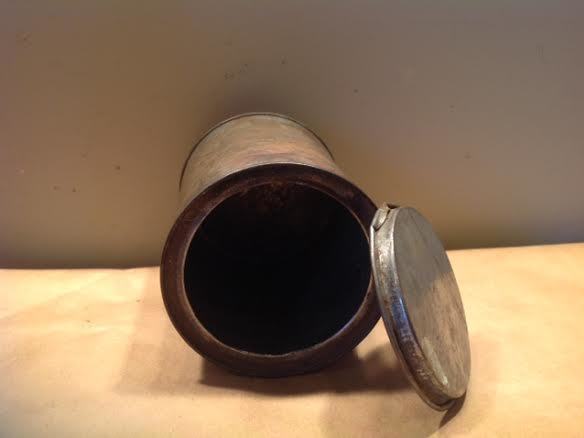 In the Bronx home of Guta and Mayer Rak, this tin canister used to hold Swee Touch Nee tea.

It was a rusty tin canister, about the size of a coffee can. Inside — always — were bags of Swee Touch Nee tea, with a distinctive, floral, sweet smell.

The tea was a hallmark in the home of Guta and Mayer Rak. Eda Rak remembers her parents drinking it out of tall glass cups, with a sugar cube between the teeth. It was more than a little embarrassing, she says.

Before World War II, Mayer Rak had been a writer in Europe. In the decades after, he worked in the garment industry in the Bronx. In between the two lives, he and his wife spent years fleeing Nazi and Soviet persecution.

They didn't talk much about that time. And they didn't talk about the tea canister, a humble-looking household object, at all. Until one day, they finally mentioned to their daughter that it might hold something more than tea.

The story started in 1939 in Warsaw, Poland, where the Raks lived. That September, Nazi Germany's invasion of Poland began. 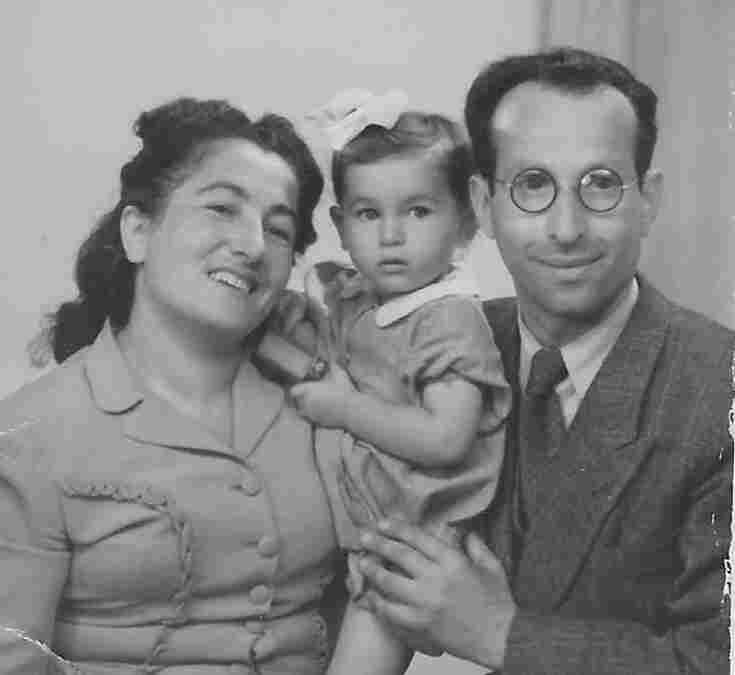 Guta and Mayer Rak with their daughter, Eda, in 1947. Eda was born in Lodz, Poland, when the Raks briefly returned to their home country after the end of World War II. Courtesy Sabina Rak Neugebauer hide caption 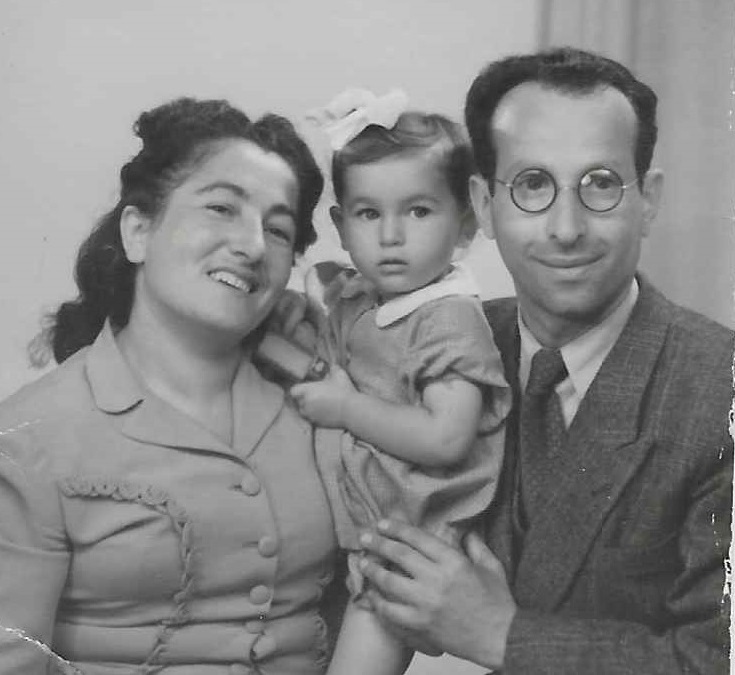 Guta and Mayer Rak with their daughter, Eda, in 1947. Eda was born in Lodz, Poland, when the Raks briefly returned to their home country after the end of World War II.

The full horror of the coming Holocaust may have been unimaginable. But a Jewish couple facing the arrival of the Nazi forces knew to be afraid.

"Aware of what was to come, they took whatever small pieces of jewelry they had," Eda says. They went to the local tinsmith and asked him to melt it down and conceal it "in the lip of a very ordinary tin tea canister."

The tinsmith took the jewelry and later gave them back the canister. It went with them when they fled east. It was with the Raks when the Soviets arrested them "as foreigners and potential spies," as Sabina wrote in her summary of the story.

They carried it to labor camps in Siberia, where they were forced to cut timber, Sabina says. When they were released from the camp in 1942, they traveled south to Tashkent, in modern-day Uzbekistan. The canister went, too.

"At the end of the war, they fled Russia just ahead of the secret police, and went west back to Poland hoping to be reunited with their family, the canister still with them," Sabina wrote. "They arrived in Warsaw only to find that the entirety of their family was eradicated, their siblings dead."

The Raks, with nothing left for them in Poland, traveled to Sweden and then to New York. 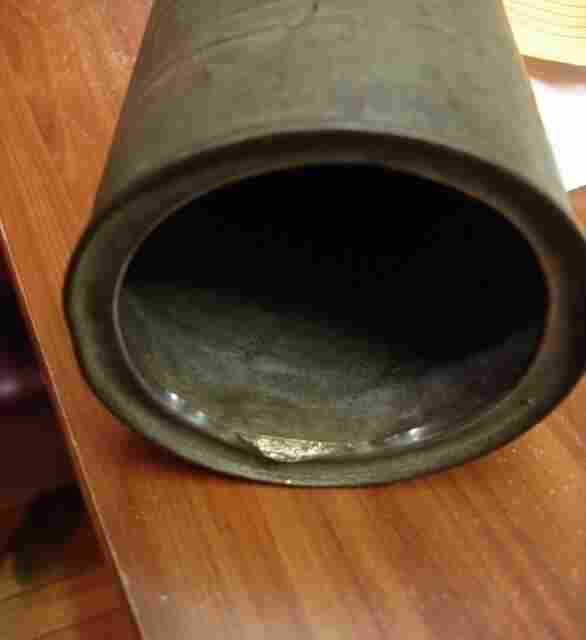 When jeweler Harmeet Singh examined the tin canister, he could tell there was metal hidden behind the lip, but you couldn't tell what it was. "Is it really gold or not — is it just a piece of lead to make it feel heavy?" he remembers wondering. He worked to remove the metal with a minimum amount of harm to the canister. Courtesy of Harmeet Singh hide caption

The canister went everywhere with them. But they never pried up the lip or cut through the sides. And that means they never discovered if the gold was actually there — or if the tinsmith, knowing the powerlessness of his customers, just pocketed the jewelry.

"They were immensely proud," Eda says, "that through all these peregrinations they never needed to find out if they had been cheated or not."

"It became a symbol of how resilient they were — they were always able to manage. At poverty level sometimes, below it others, but they never needed to extract whatever there was — if there was anything under the lid — and use it for their survival."

"At their death, that was my inheritance," 70-year-old Eda says. "And as to what might be inside? "I never wanted to know."

So it remained a mystery ... until Sabina had an idea.

She and her fiance, Marcio Siwi, are getting married later this month. She asked her mother if they could extract whatever might be stowed in the tea canister and melt it down for wedding rings.

"It didn't matter to me if it was gold or it was lead. It was the idea that it was a piece of our history," says Sabina, 35. "To take this object that represents a sort of very difficult historical moment, one of pain and also resilience, and to really transform it into this gift for the next generation — what better way to say they survived, and they lived, and they loved?"

Eda wasn't sure at first. "What was in the tea canister ... wasn't what was valuable," she says. "It was the fact that it was their companion through all their travels. How is that possible, that you can be locked up in a slave labor camp and still hold onto this little piece of tin?"

But after some thought, she agreed. Eda took the tin to a local jeweler, Harmeet Singh.

The jeweler was immediately on board. "I like a challenge," he says.

He could feel metal tucked away under the lip but couldn't identify what it was, calling it "totally hidden."

Not wanting to damage the canister any more than he had to, Singh made a special bent tool to reach inside and then gently heated the top of the container. 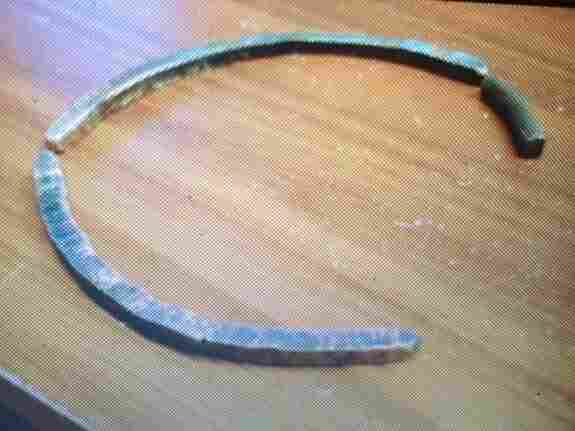 Three curves of gold were held inside the lip of the canister. Courtesy of Harmeet Singh hide caption 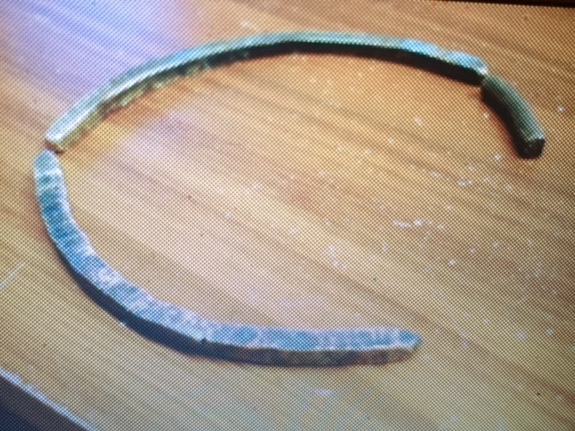 Three curves of gold were held inside the lip of the canister.

"Things started to loosen up," Singh says. Then he pulled out three curves of metal with the distinctive luster of gold. He quickly called Eda.

"It was an amazing moment," Sabina says. "It was so powerful, because it meant even in this incredible moment of vulnerability, the jeweler in Poland, the tinsmith, really stuck to his word."

The work was done well, Singh says, and it must have been a tricky job for the tinsmith. The gold was held in place with lead solder, and Singh says bonding gold, tin and lead like that is "not easy."

"He definitely knew what he was doing," he says.

Singh melted down the metal and determined that it was 18-karat rose gold — the kind that was commonly used in most of Eastern Europe. 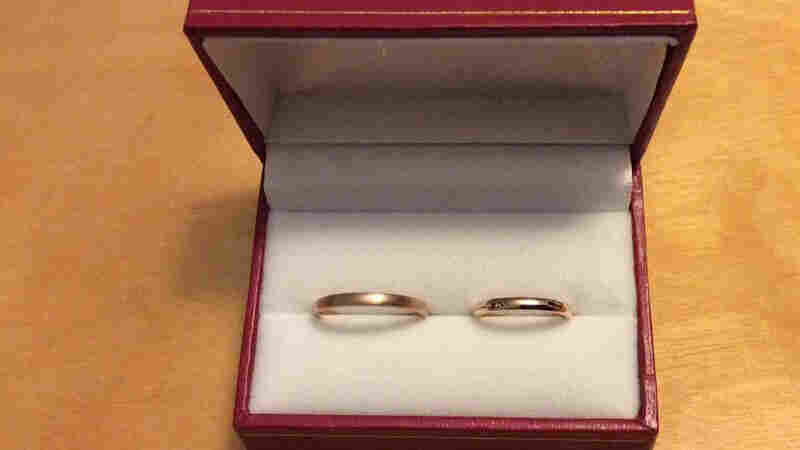 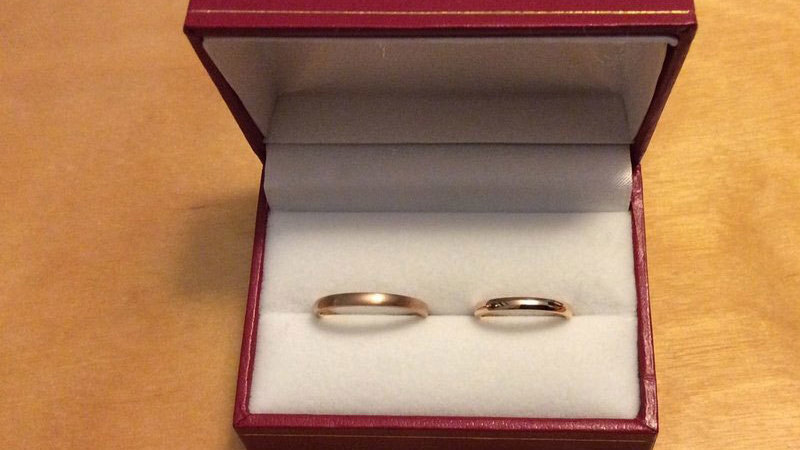 There was enough to make rings for Sabina and her fiance, and more gold left over if Sabina's younger sister ever wants it, Eda says.

And for herself, well, "I'll always have the tin," she says.

It's still a symbol of her parents' resilience — but now it means something more.

"It was just so thrilling that there was goodness in the world," Eda says.